Estimation of the Number of People With Opioid Addiction in Germany

Background: Opioid addiction is one of the most common substance-related disorders worldwide, and morbidity and mortality due to opioid addiction place a heavy burden on society. Knowing the size of the population that is addicted to opioids is a prerequisite for the development and implementation of appropriate health-policy measures.

Methods: Our estimate for Germany for 2016 is based on an enumeration of opioid-addicted persons who were entered in a registry of persons receiving substitution therapy, an enumeration of persons receiving outpatient and inpatient care for addiction without substitution therapy, an extrapolation to all addiction care facilities, and an estimation of the number of opioid-addicted persons who were not accounted for either in the substitution registry or in addiction care.

Conclusion: Comparisons with earlier estimates suggest that the number of persons addicted to opioids in Germany has hardly changed over the past 20 years. Despite methodological limitations, this estimate can be considered highly valid. Nearly all persons who are addicted to opioids are in contact with the addiction care system.

Opioid addiction is one of the most common substance-related disorders worldwide. It is responsible for the majority of the morbidity and mortality caused by drugs in the population (1). Opioids include both synthetic (e.g. heroin, methadone, buprenorphine, fentanyl) and plant-derived substances (opiates, e.g. codeine and morphine). Opioids carry major risks of physical and pharmacological dependency (2). Intravenous use, in particular, is associated with a non-negligible risk of communicable diseases (3) or death due to overdose or the long-term consequences of use (4). Finally, there is an increased risk of criminal behavior, specifically drug-related crime (5).

Knowing how many individuals are addicted to opioids is important for setting health policy (6). In the first instance, calculations in Germany concern addiction caused by taking illegal opioid-containing substances. A preliminary national estimate for Germany as a whole in 1989, based on treatment data, gave a figure of 60 000 to 80 000 individuals who were problem users of opiates, cocaine, stimulants, or hallucinogenic drugs (7). A German expert group estimated the number of heroin users in western and eastern Germany in 1995 at 127 000 to 152 000 (8); for the same year, the number of intravenous drug users in western Germany and Berlin was estimated at a mean of 150 000 (97 000 to 204 000) on the basis of a survey among general practitioners (9).

As part of estimating the number of individuals with problematic drug use in European Union countries, figures of 127 000 to 190 000 opiate users in Germany for the year 2000 were found using various methods. This calculation was based on treatment, police, and mortality data (10). Using these approaches, comparative estimates for 1990, 1995, and 2000 indicated a moderate increase in the number of opiate users (11).

The aim of this study was to estimate the number of individuals addicted to opioids in Germany and its individual federal states for the calendar year 2016.

Although there are no diagnoses for individuals with no case documentation, it can nevertheless be assumed from care they have received, e.g. needle exchange, that they are addicted to opioids.

Cases are documented when an individual addicted to opioids is prescribed an opioid substitute by his/her treating physician. The coded patient data reported by the doctor to Germany’s Federal Institute for Drugs and Medical Devices (BfArM, Bundesinstitut für Arzneimittel und Medizinprodukte) is added to the substitution treatment registry there in encrypted form (12). Double entries resulting from the same code being used for 2 individuals were ruled out by consulting the treating physicians.

Unlike the substitution treatment registry, the DSHS records treatment episodes rather than individuals and reports only aggregate data, so double entries of individuals cannot be checked. Individuals may be counted twice if they are recorded at both inpatient and outpatient facilities. Correction factors were calculated using Berlin’s Addiction Care Statistical Service (Suchthilfe Berlin) data (15) and used to convert DSHS data on treatment episodes to individual-related data and to estimate the overlap with individuals addicted to opioids and undergoing substitution treatment. Because the DSHS does not cover all addiction care facilities, data was extrapolated to the total number of addiction care facilities (Figure; see eMethods for a detailed description).

Individuals addicted to opioids are not recorded in the DSHS if they attend a low-threshold facility with no case documentation and use its services, e.g. when addiction care is provided together with social work. In order to estimate the size of this group as a proportion of all individuals addicted to opioids, clients at 5 selected facilities in Berlin, Frankfurt, Hamburg, Munich, and Nuremberg were routinely surveyed, for example during needle exchange, at contact points, or at mobile addiction care services. The use of addiction care facilities was surveyed between July and September 2017 as part of regular contact. Addiction professionals recorded clients’ sex and their opioid consumption in the last 12 months and asked which addiction care facilities, by DSHS types, they had attended in the same period. Facilities ruled out double entries using, for example, personal acquaintance, lists of pseudonyms, or statement of characteristics. Clients with insufficient knowledge of German were largely handled by professionals with knowledge of the relevant language (e.g. Farsi, Russian, Turkish). Logistic regression was used to estimate 95% confidence intervals for the percentages of all individuals who used opioids and who used only services with no case documentation, for the sample as a whole and by sex. The facility type was used as control variable.

A total of 123 387 encrypted codes were recorded in the database of the Federal Institute for Drugs and Medical Devices (BfArM) between 1 July, 2016 and 30 June, 2017. After codes entered twice or multiple times had been removed 93 939 different codes remained. A total of 0.99% of the reports were identical by chance and should not have been removed from the total number of codes, so 442 cases (0.99% of 44 887) were added. This led to a figure of 94 381 for the number of patients undergoing substitution treatment in 2016 according to the substitution treatment registry.

The number of individuals addicted to opioids and not undergoing substitution treatment was obtained from the DSHS data in line with the following characteristics:

The estimated figure was 66 220 individuals (50 953 men and 15 267 women) addicted to opioids and not undergoing substitution treatment.

Low-threshold facilities with no case documentation

A total of 884 individuals addicted to opioids were recorded in routine documentation at the 5 locations. It was estimated that 9.6% (95% confidence interval [CI]: 7.6 to 11.6%) of men and 5.2% (2.1 to 8.4%) of women used only low-threshold facilities or other addiction care with no case documentation.

Estimate for Germany as a whole

Table 2
Estimated total number of individuals addicted to opioids, population in 2016, and rate of opioid addiction per 1000 inhabitants by federal state
Enlarge All figures

The estimated number of individuals addicted to opioids in Germany in 2016 is based on the following:

There are no current figures for Germany or its federal states except for this estimate and one study in Berlin (18). This estimate is of a similar mean value to earlier estimates from the year 1995—97 000 to 204 000 intravenous drug users in western Germany and Berlin (9)—and from the year 2000—127 000 to 190 000 opiate users in Germany as a whole (10). Although the 1995 estimate was for western Germany and Berlin and concerned intravenous drug users, after Germany’s reunification opioid consumption was almost zero in the new federal states in the 1990s and intravenous use was the most popular route of administration in Western Europe.

Our estimate has a number of limitations. The validity of the data in the substitution treatment registry depends on the completeness and quality of physicians’ reports. There are also the lack of age-specific data in the substitution treatment registry, the conversion of DSHS data on treatment episodes to individual-based data, and the use of Berlin´s Addiction Care Statistical Service (Suchthilfe Berlin) data to calculate correction factors and the associated assumption of representativeness. Other than Berlin´s Addiction Care Statistical Service data, relevant individual-related data is available only for Hamburg, Hesse, and Schleswig-Holstein (20), and this does not allow a representative estimate to be made for Germany either. Finally, it must be pointed out that individuals addicted to opioids who were incarcerated, in facilities for integration into society, or in acute care could not be included in the estimate, even though it can be assumed that there is great overlap with the data sources used. Our estimate should therefore be treated as conservative.

This estimate assumes that almost everyone addicted to opioids is in some kind of contact with the addiction care system. Studies in the open drug scene indicate that a total of 93 to 99% of those surveyed (2010: 99%; 2012: 98%; 2014: 96%; 2016: 93%) have used the addiction care system at least once in the last 3 months, mostly in the area of harm reduction, such as needle exchange or drug consumption rooms (21). However, the existence of a population of opioid users who could potentially be diagnosed with addiction and who cannot be counted among harm reduction service users cannot be ruled out. These might include, for example, individuals who are integrated into society, who have the financial means to procure opioids, and who use opioids with no impact on society or damage to their health.

Epidemiological data indicates that first demand for addiction counseling and/or treatment, the number of first-time users, and the number of drug law violations due to heroin and other opioid use have been decreasing for years. There is also evidence that the range of drugs available has expanded substantially in the last 20 years and that consumption patterns have diversified.

The overall scale of heroin and other opioid use has fallen in recent years, and opioid use seems to be less attractive to young people than stimulant use, for example (22). The increasingly older clients who attend advice and treatment facilities for opioid use and the substantial increase in the mean age of those dying of opioid overdoses in the last 20 years also point in this direction. However, comparison of our estimate with earlier estimates suggests that the number of individuals addicted to opioids in Germany has barely changed in the last 20 years. This can be explained by stagnation of the prevalence of opioid addiction and a decline in its incidence.

Although substitution treatment makes a substantial contribution to ensuring patients’ survival (23), only some 4% of patients per year successfully complete treatment (24–26). At the same time, there is evidence in the literature of a decline in new cases of opioid-related disorders in Europe (27–29). Consequently, prevalence is falling only in the long term, as substitution treatment has been rolled out comprehensively, leading to better survival and the ageing of the population of users as a whole. However, the dramatic increase in opioid-related mortality observed in the USA in the last two decades in the context of liberal prescription of opioid-containing analgesics to patients with chronic, non-cancer-related pain (30) suggests that more attention must be paid to preventing possible iatrogenic opioid addiction disorders using appropriate countermeasures.

The study Estimation of the number of people with opioid addiction in Germany was funded by Germany’s Federal Ministry of Health (file no.: ZMVI1–2517DSM209).

Table 2
Estimated total number of individuals addicted to opioids, population in 2016, and rate of opioid addiction per 1000 inhabitants by federal state
Enlarge All figures
Estimation of the Number of People With Opioid Addiction in... 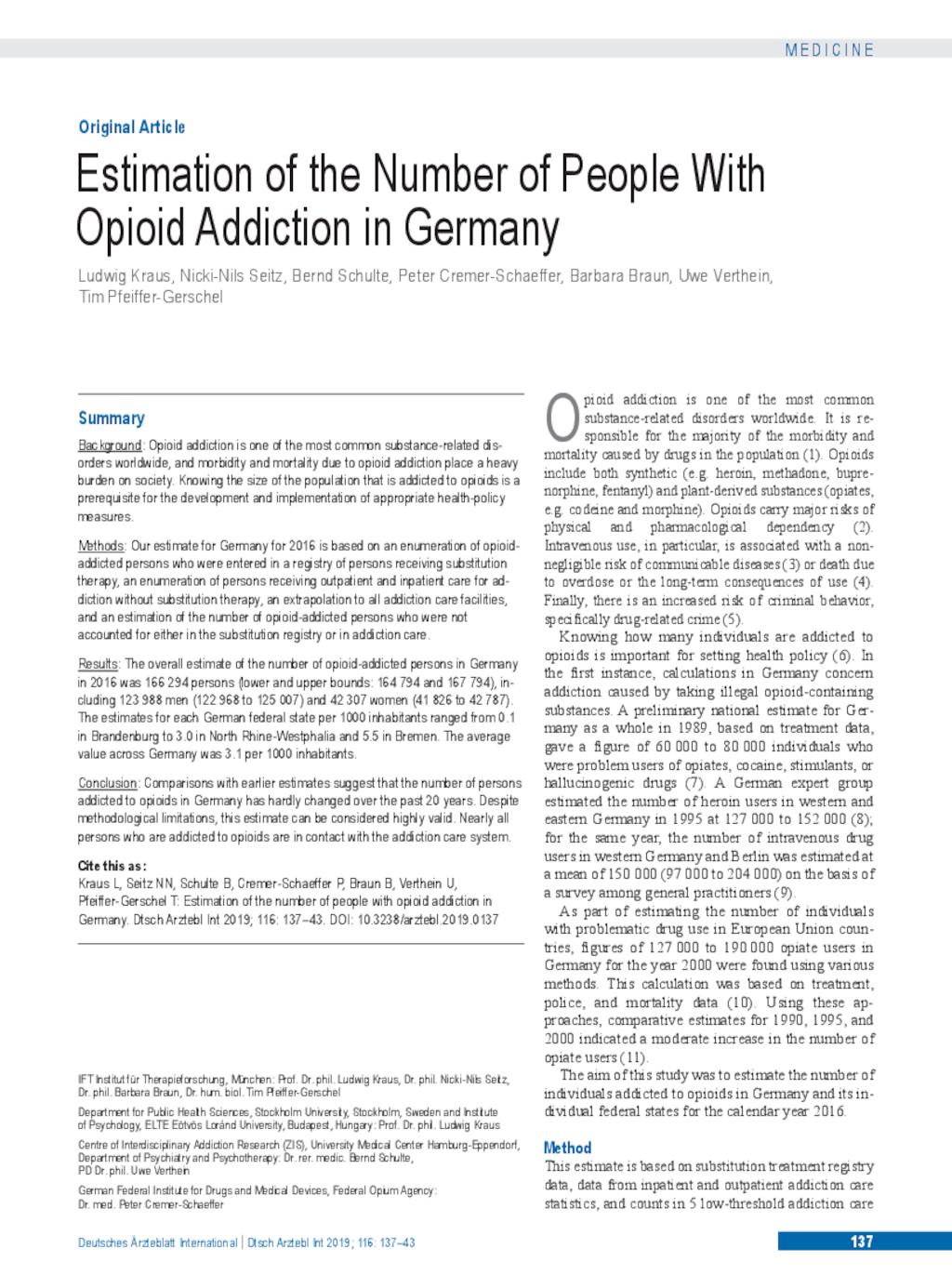