Dr. Beutner has provided a vivid example of how intersensory conflicts may blur into one another (1, 2): someone on a ship’s top deck or up in the masts may experience a temporary sensory discrepancy between the view at distant waves and the perception of the ship’s own movement, which leads to incongruous, motion related information reaching the sensory organs in the sense of a type A1 conflict. Especially moving waves with a slow periodicity of 0.1–0.5 Hz are particularly pathogenetic (3), which intensifies higher up the mast owing to the wider range of movement.

On the bottom deck and in the center of the ship, near the apex of the ship’s deflection, movements are least noticeable, which can help reduce the problems substantially. The lack of an outside view can instead lead to a kinetogenic type A3 conflict, since the visual impression of a seemingly stable environment and the information on the ship’s movement provided by the vestibular apparatus and proprioception contradict each other.

Someone with motion sickness on board a ship is therefore faced with a dilemma relating to the basic conflict of the senses. In actual fact, the best solution would be to stay in the center of the ship, near the bottom, but with an external view.

We thank our correspondent for mentioning meclozine. The effectiveness of this first generation antihistamine has been much confirmed for motion sickness and sickness in pregnancy. In the past it was also commonly prescribed for travel sickness, but it is no longer commercially available in Germany.

Furthermore we wish to extend our thanks to the group of ship’s doctors for their enthusiastic correspondence. Sea sickness can easily become a mass illness, especially on a large ship, something we touched on in our article (4) by mentioning the potentially large proportions of crew thus affected. Sea sickness can also put pressure on doctors to act rapidly and decisively—especially at sea, where one cannot extricate oneself from the situation. This is particularly the case for elderly patients, in order to prevent/avoid any complications of their underlying disorders.

We think that in this context, the information about a possibly difficult differential diagnostic distinction between severe motion sickness and the side effects of relevant medication from health problems that may appear similar is extremely important and valuable.

We are aware that in the past, metoclopramide was often and successfully used to treat motion sickness. However, we have to point out that because of the now known extrapyramidal side effects—which may in individual cases take an irreversible course (5)—metoclopramide is no longer indicated in motion sickness. A possible off-label use of this substance should be considered only after a particularly careful weighing up of potential benefits and risks. The indication for pharmacotherapy using cinnarizine/dimenhydrinate (treatment of dizziness/vertigo of any genesis) has been explained in our article (4). 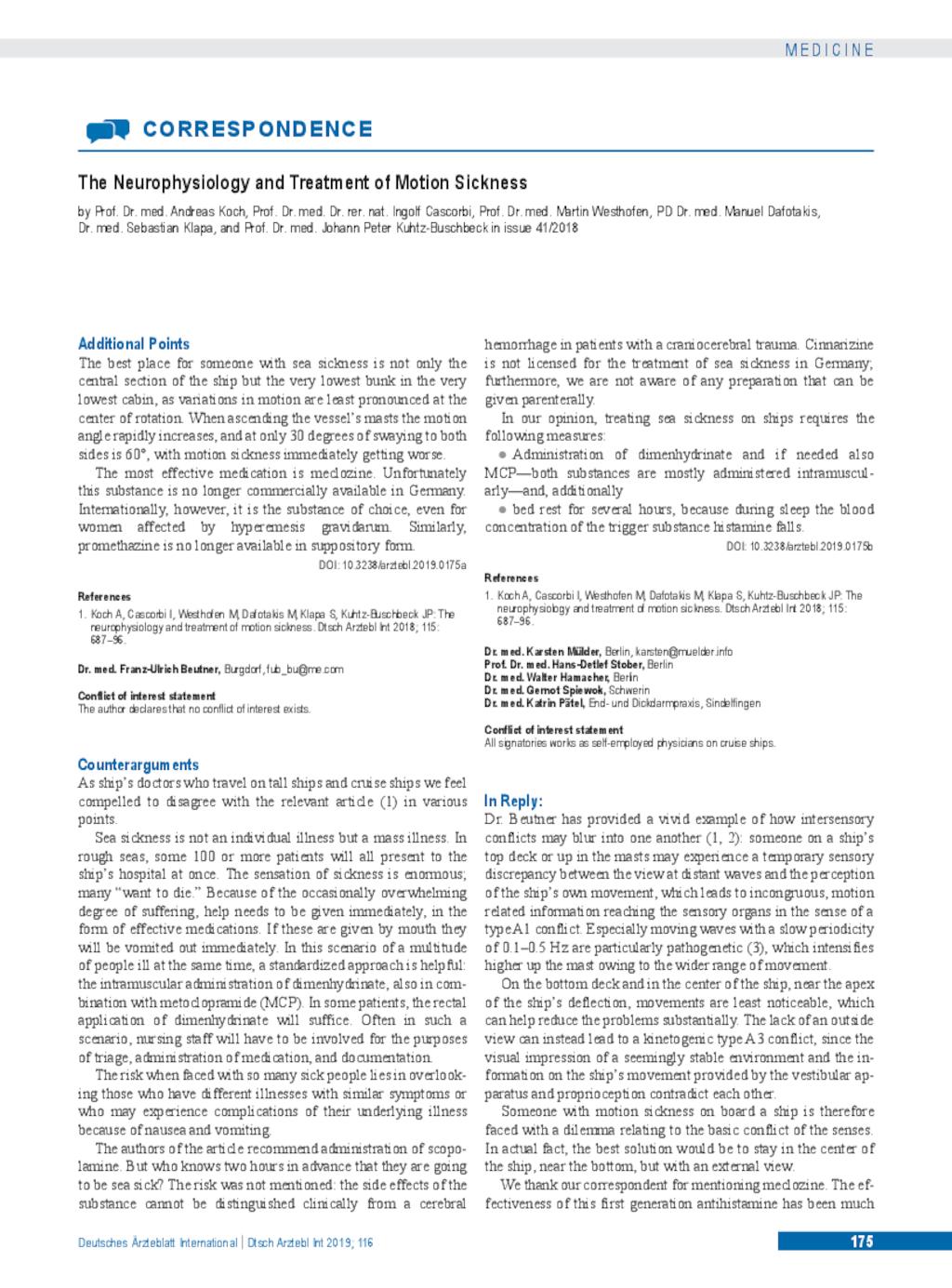