Methods: We performed a selective literature search in PubMed including randomized controlled trials (RCT) (n ≥ 200) and meta-analyses published in the field of NIV in neonatology and follow-up studies focusing on long term pulmonary and neurodevelopmental outcomes.

Results: Individual studies do not show a significant risk reduction for the combined endpoint death or BPD in preterm infants caused by early CPAP in RDS when compared to primary intubation. One meta-analysis comparing four studies found CPAP significantly reduces the risk of BPD or death (relative risk: 0.91; 95% confidence interval [0.84;0.99]). Nasal intermittent positive pressure ventilation (NIPPV) as a primary ventilation strategy reduces the rate of intubations in infants with RDS (RR: 0.78 [0.64;0.94]) when compared to CPAP but does not affect the rate of BPD (RR: 0.78 [0.58;1.06]).

Conclusion: Early CPAP reduces the need for IMV and the risk of BPD or death in preterm infants with RDS. NIPPV may offer advantages over CPAP regarding intubation rates. Networking-based follow-up programs are required to assess the effect of NIV on long term pulmonary and neurodevelopmental outcomes.

For years, invasive mechanical ventilation (IMV) was the primary treatment of very low birth weight infants (VLBWI) with respiratory distress syndrome (RDS). RDS is caused by a primary surfactant deficiency of the immature lungs and leads to a reduced compliance of the respiratory system and progressive hypoxic respiratory failure if untreated (1). Although lifesaving, IMV is an important risk factor in the development of bronchopulmonary dysplasia (BPD) (2). BPD is characterized histologically by impaired alveolar and vascular lung development and clinically defined clinically as the need for oxygen and or respiratory support at 36 weeks postmenstrual age (2, 3). More than 20% of preterm infants with a gestational age (GA) <32 weeks in Germany are affected by the disease (4).

Despite advances in neonatal pulmonology, such as antenatal corticosteroids and surfactant administration, the incidence of BPD has not changed significantly over the last decade (e1). To alleviate the harmful effects of IMV on the immature lungs (i.e. volu- and barotrauma, inflammatory mediated alveolar and vascular destruction resulting in progressive impaired gas exchange), nasal CPAP has been introduced as a noninvasive ventilation (NIV) strategy in neonatal care. CPAP significantly reduced the need for IMV, but failure rates of almost 50% have prompted neonatologists to seek more effective NIV modalities (8, 9). Nasal intermittent positive pressure ventilation (NIPPV) and heated humidified high flow nasal cannulae (HHHFNC) have emerged and are now used in both pediatrics and adult intensive care medicine (10, 11, e2).

In this review, we discuss and summarize the current evidence of the available NIV modes in neonatology, their indications, mechanisms of action and effects on important short and long term morbidities associated with the use of NIV. The review is based on a selective literature search in PubMed.

Effects and Clinical Application of Different NIV Modes in Neonates

Several randomized controlled trials (RCT) assessed the efficacy and safety of early nasal CPAP in VLBWI in the surfactant and antenatal corticosteroid era (Table 1, eBox 2). Although the study designs and thresholds for respiratory interventions (i.e. criteria for intubation and surfactant administration) vary among the trials, two basic treatment strategies were compared:

Table 1
Selected RCTs on nCPAP with selective or prophylactic surfactant administration vs. IMV with or without surfactant application (including INSURE)
Enlarge All figures

The results of the trials demonstrate that the use of early CPAP significantly reduced the need for IMV and surfactant administration as compared to primary intubation in the delivery room. However, none of the individual trials was able to show a significant reduction in the rate of BPD or death (8, 9, 12–15) (Table 1).

NIPPV can be applied in a synchronized mode with different trigger systems (i.e. pneumatic capsule to detect abdominal movement or flow-trigger). Effects mediated during NIPPV are summarized in eBox 3. NIPPV can be used in different clinical scenarios.

Evidence for the use of NIPPV mainly derives from small, single-center trials that differ substantially in the ventilators used (bilevel-NIPPV, CMV-NIPPV), the settings (i.e. respiratory rate, pressures, inspiratory times), the patient population and the mode of synchronization, if applied. A recent Cochrane meta-analysis including RCT and quasi RCT found a significantly lower rate of respiratory failure (RR: 0.65 [0.51;0.82]) and need for intubation within the first week of life (RR: 0.78 [0.64;0.94]) in infants treated with primary NIPPV as compared to CPAP (18) (Table 2).

Table 2
Results of meta-analyses on NIPPV vs. nCPAP as primary respiratory support and post-extubation
Enlarge All figures

NIPPV as post-extubation mode of ventilation resulted in a significantly lower rate of respiratory failure (RR: 0.71 [0.61;0.82]) and reintubation rates (RR: 0.76 [0.65;0.88]) when compared to nasal CPAP in another Cochrane meta-analysis (19). Data on other important outcome measures (BPD, mortality, necrotizing enterocolitis, intraventricular hemorrhage, retinopathy of prematurity) remained unaffected by the NIPPV intervention in the CPAP and the NIPPV group in both meta-analyses (Table 2).

The function of HHHFNC is to deliver heated and humidified gas at flow rates > 1l/min through small binasal prongs (eFigure 2). Several mechanisms of action and clinical effects of this method have been reported (eBox 4) (20, e6). Importantly and in contrast to nasal CPAP, HHHFNC creates a flow-related, variable distending pressure that is unmeasurable in clinical practice, delivered to the infants’ upper airway and lungs. Because of the pragmatic setup, easy handling and cost-effectiveness, the use of HHHFNC is rapidly increasing (21). However, evidence for the use of HHHFNC as primary respiratory support for RDS or post-extubation is limited and predominantly restricted to non-inferiority trial settings with nasal CPAP being the comparative measure (Table 3).

eBox 4
HHHFNC- Mechanism of action and potential side effects (20, e6)
Enlarge All figures 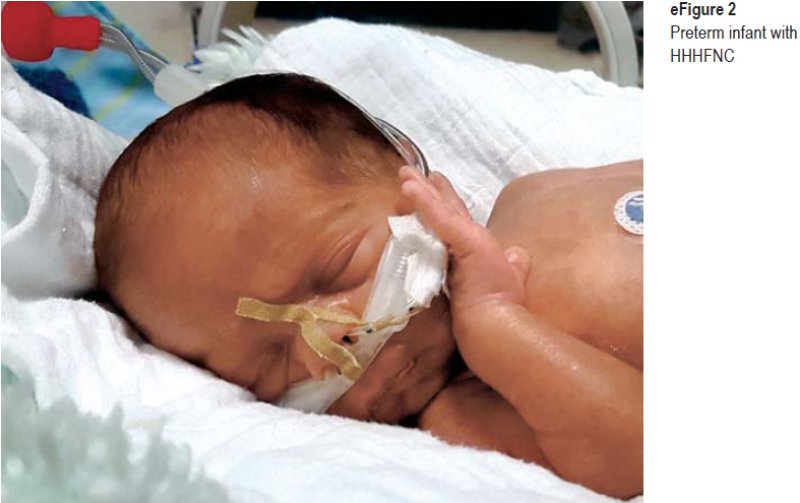 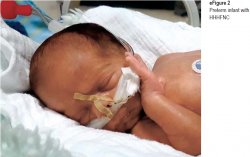 Manley et al. randomized preterm infants to HHHFNC or nasal CPAP after extubation (22). The primary outcome “treatment failure within seven days” occurred in 34.2% in the HHHFNC group and in 25.8% of the CPAP group (risk difference: 8.4%, [–1.9; 18.7]). Based on a chosen non-inferiority margin of 20% the authors concluded that HHHFNC is non-inferior to nasal CPAP after extubation. Of note, almost 50% of infants that failed on HHHFNC in this trial were rescued with nasal CPAP, leaving concerns regarding the non-inferiority conclusion. Two recent non-inferiority RCT assessed HHHFNC versus nasal CPAP as primary respiratory support in preterm infants with RDS (GA >28 weeks) defining a more restrictive margin of non-inferiority (5% and 10%, respectively) (23, 24). Enrollment was stopped early in both trials owing to a significant difference in the primary outcome “treatment failure within 72h” between the HHHFNC and the CPAP group (25.5% vs. 13.3%, risk difference: 12.3%, [5.8; 18.7], p<0.001 and 26.3% vs. 7.9%, risk difference: 18.4% [9.7; 27.1], p<0.001), both studies favoring CPAP. While the rate of intubation did not differ between the groups in the intention-to-treat analysis in both studies, respectively 39% and 91% of subjects assigned to the HHHFNC group received rescue CPAP and were subsequently saved from intubation. Another comparable non-inferiority trial, however, found non-significant failure rates between HHHFNC and CPAP/Bilevel-NIPPV when used as primary mode of ventilation (25) (Table 3).

According to a recent meta-analysis, HHHFNC as primary mode or post extubation does not significantly affect the rate of BPD or other short term neonatal morbidities, except for significantly less nasal trauma in comparison to nasal CPAP (e7, e8). However, only few subjects were <28 weeks GA in most of the trials and study results confirm inferiority of HHHFNC compared to nasal CPAP when used as primary mode of ventilation in preterm infants with RDS.

Since the risk of BPD is inversely proportional to GA and birthweight, it is not surprising that the incidence of BPD has increased over time by shifting the demographics to earlier GA (28). Of note, the rates of BPD reported in the NIV studies differ substantially since the definition of BPD and the study population is often diverse (5).

Few prospective long-term follow-up studies on the effect of NIV on pulmonary and neurodevelopmental outcomes in preterm infants have been published. Respiratory follow-up from the SUPPORT study showed fewer episodes of wheezing (28.9% vs. 36.5%, p<0.05) and fewer physician visits for breathing problems (68.0 vs. 72.9%, p<0.05) in the CPAP group as compared to the IMV + surfactant group at 18–22 months corrected age (29). Doyle and colleagues recently presented 8 year follow-up data on lung function of surviving infants with ≤ 28 weeks GA and compared cohorts with similar baseline demographics from three different time periods (1991–1992 vs. 1997 vs. 2005) (30). Besides a substantial increase in CPAP duration over time the authors found a higher rate of BPD and significantly reduced expiratory flow rates in the 2005 study cohort as compared to the 1991–1992 study population. However, these data should be interpreted with caution. First, the 8-year survival rate of the 1991–1992 cohort was 53% vs. 65% in the 2005 study group, therefore a trade-off effect for the outcome lung function cannot be excluded since the causes of mortality were not reported in the study. Second, the authors found a significant decrease in the use of postnatal steroids (40% in 1991–1992 vs. 23% in 2005), a treatment strategy that reduces the rate of BPD but may also adversely affect neurodevelopmental outcomes (31) (eBox 5).

eBox 5
Effects of postnatal systemic corticosteroids on the preterm lung and side effects (31, e17, e18)
Enlarge All figures

The SUPPORT study group did not find significant differences in the composite outcome of death or neurodevelopmental impairment between the CPAP and the IMV + surfactant group at 18–22 months corrected age (32). Importantly, 10.9 % of infants in the CPAP group and 9.1% in the IMV group had neurodevelopmental impairments (defined as any of the following: a cognitive composite score on the Bayley Scale of Infants and Toddler Development III of less than 70, a Gross Motor Function Classification System score of 2 or higher, moderate or severe cerebral palsy, hearing impairment, or bilateral visual impairment).

Lack of systematic follow up data from other representative RCTs (e.g. COIN-trial, CURPAP-study (8, 13) emphasizes the need for an adequate long term neurological and pulmonary follow up and interdisciplinary treatment of these high risk infants.

Acknowledging the evidence for the use of early CPAP, the European Consensus Guidelines currently recommend prophylactic CPAP and early selective surfactant administration over primary intubation in spontaneously breathing preterm infants (33). The results of a survey study in the US (26 participating network centers) suggest a decreasing number of VLBWI being on IMV and an increased use of NIPPV modes from 2002 to 2012 (14% to 37%) (34).

There is growing evidence that frequent fluctuations in arterial oxygen saturation are associated with the development of retinopathy of prematurity and a higher risk of late death and neurological disabilities at 18 months corrected age in VLBWI (35, 36).

Utility and duration of NIV have been further extended by caregivers to prevent and treat symptoms of apnea of prematurity (e9, e10). This opens further research questions on the effect of prolonged NIV support on neonatal morbidities, as well as the upcoming and challenging questions about the appropriate weaning strategies from NIV (37).

Newer methods, such as neurally adjusted ventilator assist (NAVA) or the use of nasal high frequency oscillatory ventilation (nHFOV) are promising innovations for NIV in preterm infants. To date, only results of small single-center trials are available with promising data on effective synchronization during neutrally adjusted NIV and a reduced need for IMV with the use of nHFOV as compared to nasal CPAP in preterm infants with moderate/severe RDS (38, 39).

In the context of initial stabilization on NIV, the role of noninvasive surfactant application becomes more important, especially how its use may further contribute to improved outcomes in VLBWI (40).

Based on best evidence, nasal CPAP is the gold standard NIV mode. NIPPV is an alternative to nasal CPAP as primary or post-extubation respiratory support in preterm infants with RDS. With its advantages of easy handling, less nasal trauma and improved infant-parent bonding, HHHFNC therapy is now almost universally employed in neonatal intensive care but may not be suitable in VLBWI infants with surfactant-deficiency and severe acute pulmonary dysfunction. Effects of NIV on the rate of BPD are small but promising and warrant ongoing research in the field of NIV. Long-term neurodevelopmental and pulmonary outcomes require a prospective, ideally neonatal network–based follow-up program.

Table 1
Selected RCTs on nCPAP with selective or prophylactic surfactant administration vs. IMV with or without surfactant application (including INSURE)
Enlarge All figures

Table 2
Results of meta-analyses on NIPPV vs. nCPAP as primary respiratory support and post-extubation
Enlarge All figures

eBox 4
HHHFNC- Mechanism of action and potential side effects (20, e6)
Enlarge All figures

eBox 5
Effects of postnatal systemic corticosteroids on the preterm lung and side effects (31, e17, e18)
Enlarge All figures 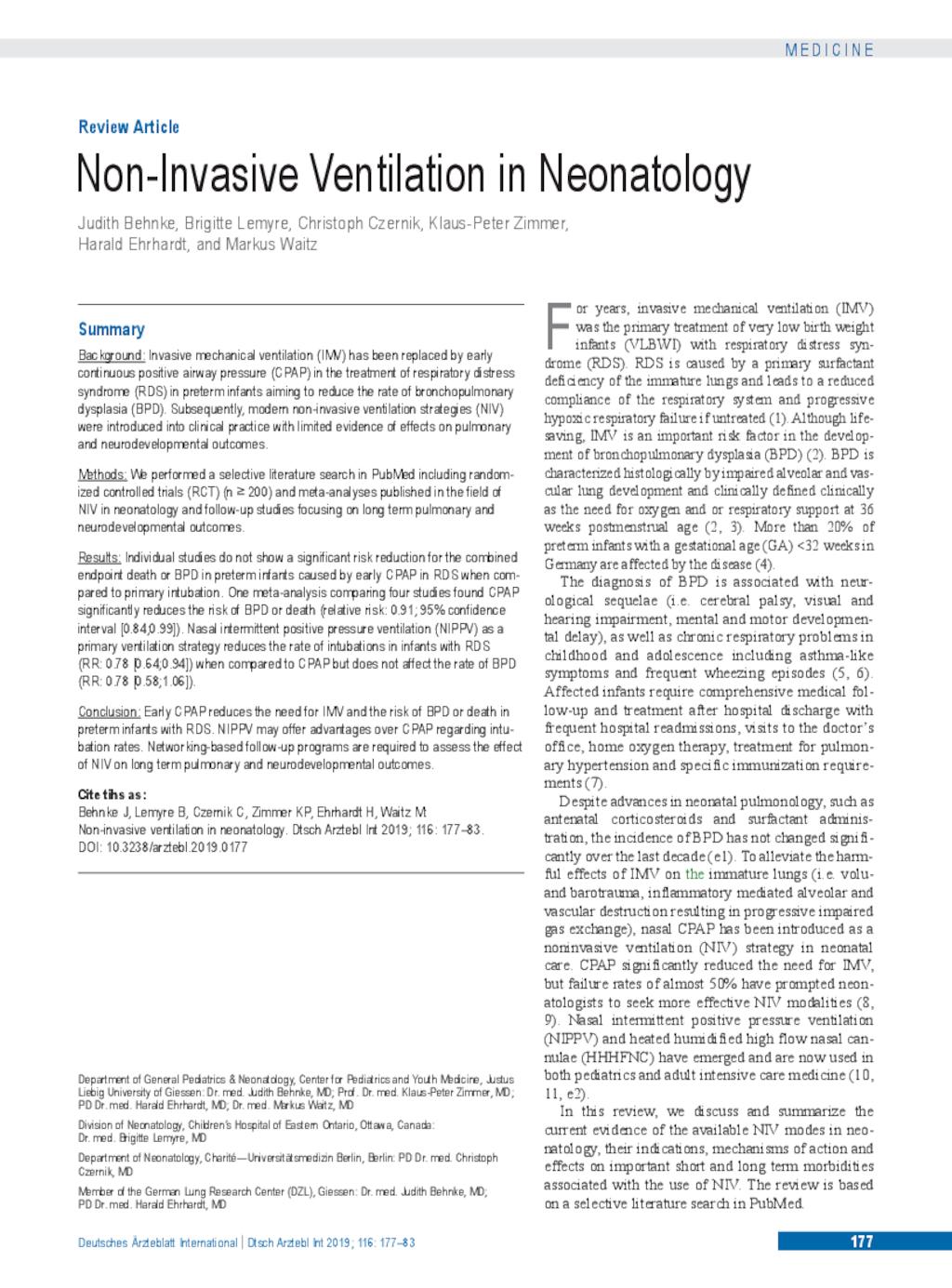