We would like to thank the authors for their contributions to the discussion, which takes into account further data from real-life studies regarding the use of non-vitamin K antagonist oral anticoagulants (NOACs). The data cited by our colleagues Maibaum and Egidi, about the lack of advantages of NOACs as compared to vitamin K antagonists (VKA) with good INR values, support our statement in the section “Differences between the substances” in our article (1). Indeed, the treatment reality of INR values varies between different surveys and studies. Against this background, it should again be noted that INR self-management by patients may increase time in therapeutic range (TTR) and is associated with a lower rate of VKA thromboembolic events, but does not affect frequency of bleeding complications or mortality (2). The differences in the results on bleeding complications and ischemic events between the prospective controlled and randomized pivotal studies and the real-life data, as highlighted by our colleague Kiesewetter, once again demonstrate the limitations of these two approaches for generating results. Furthermore, the author rightly refers to the importance of monitoring liver and kidney values ​​with NOACs, whereby the INR controls with VKA must be much more closely followed, especially in light of the INR-influencing factors of diet and co-medication. This interaction is less pronounced in NOACs. Quantification of the anti-Xa activity or the ecarin clotting time/ diluted thrombin time with NOACs is of therapeutic interest; however, this approach was not chosen in randomized trials, so that there currently is no evidence to support this benefit. Furthermore, the approach of using a decreased INR target range under VKA, which reduces the risk of bleeding, is mentioned as a therapeutic option. However, against the background of possibly of an increased risk of thromboembolism, this approach is not listed in the recommendations of the specialist societies.

Conflict of interest statement
Dr. Altiok has received reimbursement for conference registration fees and travel and accommodation expenses, as well as speaking honoraria, from Daiichi Sankyo. Fees for conducting clinical contract research studies from Bayer were passed on to the University Hospital RWTH Aachen.

Prof. Marx has carried out lecture and consulting services for Bayer, Bristol-Myers Squibb, Boehringer Ingelheim, and Daiichi Sankyo; the University Hospital RWTH Aachen received the honoraria for these activities. He was also responsible for third-party funding received by the University Hospital RWTH Aachen from Boehringer Ingelheim, Daiichi Sankyo, and Pfizer. 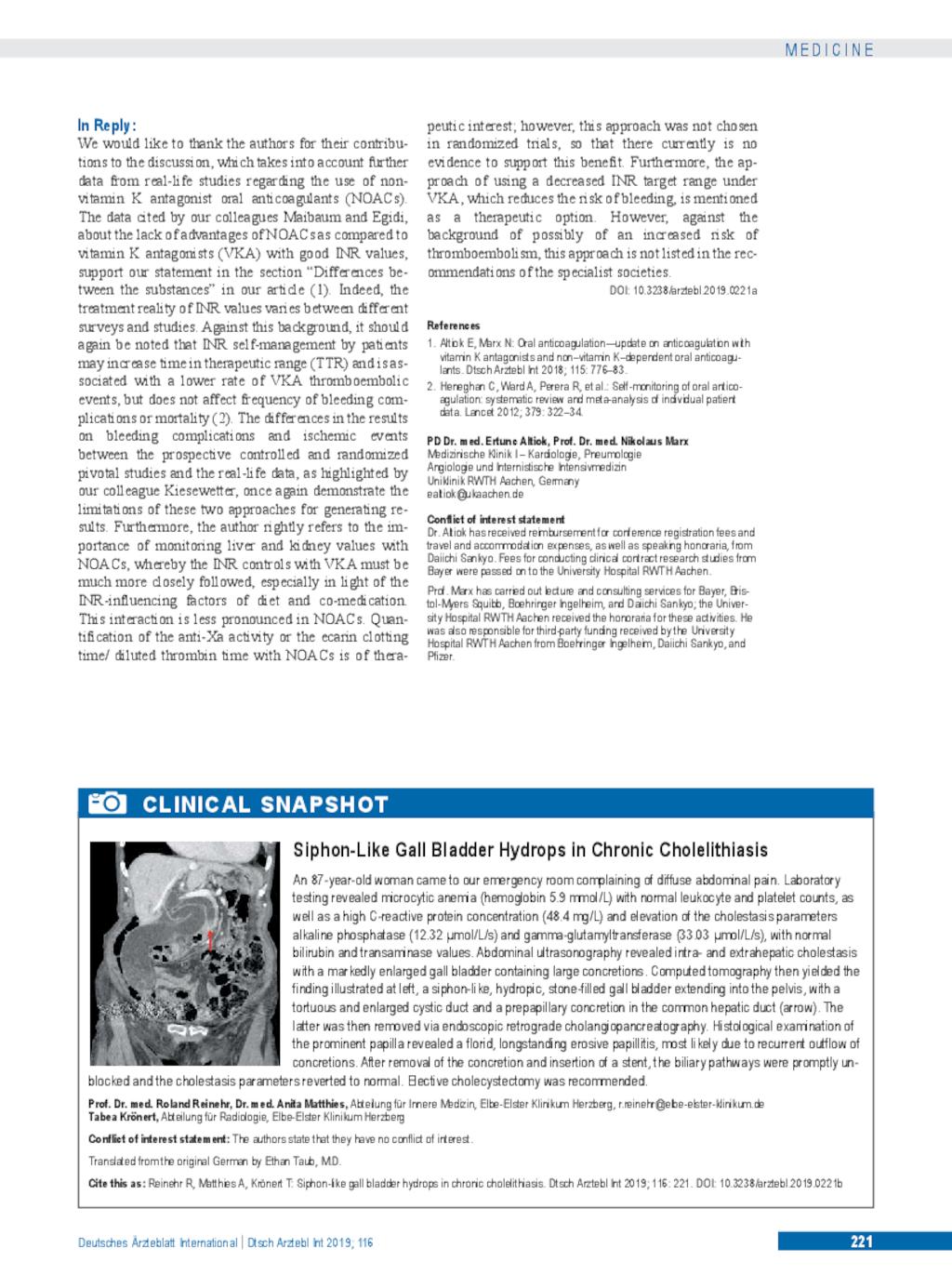