The Cardiovascular Effects of Noise

Background: Traffic noise can induce chronic stress reactions and thereby elevate the risk of cardiovascular disease. The responsible pathophysiological mechanisms are as yet unclear.

Results: Epidemiological studies have shown that noise caused by air, road, and rail traffic has a dose-dependent association with elevated cardiovascular morbidity and mortality. A current meta-analysis commissioned by the World Health Organization concludes that road-traffic noise elevates the incidence of coronary heart disease by 8% per 10 dB(A) increase starting at 50 dB(A) (95% confidence interval [1,01; 1,15]). Traffic noise at night causes fragmentation of sleep, elevation of stress hormone levels, and oxidative stress. These factors can promote the development of vascular dysfunction (endothelial dysfunction) and high blood pressure, which, in turn, elevate the cardiovascular risk.

Conclusion: Traffic noise, and air-traffic noise in particular, is an important cardiovascular risk factor that has not been sufficiently studied to date. Preventive measures are needed to protect the population from the harmful effects of noise on health.

The Nobel Prize laureate Robert Koch is said to have predicted as early as 1910 that “One day man will have to fight noise as fiercely as plague and cholera” (1). The spectrum of disease has changed greatly over the past few decades, with the result that nontransmissible chronic illnesses such as cardiovascular disorders make up a considerable part of the global disease burden (2). Although research efforts in recent years have focussed primarily on classic risk factors such as high blood pressure, smoking, and diabetes mellitus, recently published results point to the influence of environmental factors such as noise in the development of cardiovascular disease (3). Insights from epidemiological studies show that exposure to traffic noise (from aircraft, road vehicles, and trains) is associated with increased cardiovascular morbidity and mortality (4, 5). In Europe, traffic noise is responsible for 18 000 premature deaths, 1.7 million cases of hypertension, and 80 000 hospitalizations each year (6). The World Health Organization (WHO) has stated that the following years of healthy life are lost annually in Western Europe (7):

Altogether, illness induced by traffic noise results in over 1 million disability-adjusted life years (DALYs; i.e. loss of healthy life years) annually in Western Europe. Research into the effects of noise has made significant advances in recent years, particularly with regard to the pathophysiological mechanisms involved in the development of traffic noise–induced cardiovascular disease. A review of the recent literature has thus become necessary.

The definition of noise is sound perceived as annoying. Noise has an objectively (physically) quantifiable dimension in the shape of sound levels or decibels (dB[A]) (Figure 1) and a subjective (psychological) dimension determined by the listener’s individual assessment of the sound source (8). According to Babisch’s noise effects model (9), apart from the direct auditory effects of noise on the organism (damage to the acoustic apparatus by very loud sounds), noise’s non-auditory effects are primarily responsible for triggering a stress cascade (Figure 2). Long-term or short-term environmental noise can cause stress reactions/noise annoyance reactions, mediated by disturbances of sleep, communication, and activity together with the associated cognitive and emotional reactions. These affect the autonomic (sympathetic) and endocrine systems (e.g., elevated catecholamine and cortisone concentrations) and may as a result lead to changes in lipd metabolism, glucose metabolism, and blood pressure regulation that then contribute to an increased risk of cardiovascular illness. The noise-related stress is attributed an intermediary role in the development of noise-induced cardiovascular disease, i.e., the effects of noise on health are determined partly by the extent to which the listener perceives the noise as annoying (10). Data from the large, population-based Gutenberg Health Study (N = 15 010 persons resident in Mainz and the Mainz–Bingen region) show that the noise-related stress reaction to various sources of noise during the day and while sleeping at night, including aircraft (odds ratio [OR] 1.09, 95% confidence interval [1.05; 1.13]), road traffic (OR 1.15 [1.08; 1.22]), and rail traffic (OR 1.13 [1.04; 1.22] at night and per one point increase in noise annoyance) is associated dose-dependently with an increased risk of atrial fibrillation (11). Moreover, in the context of this study it was shown that the risk of depression (prevalence ratio [PR] 1.97 [1.62; 2.39]) and anxiety disorder (PR 2.14 [1.71; 2.67]), comparing no noise annoyance with extreme noise annoyance, rose with increasing total noise annoyance, which in turn may impact negatively on the cardiovascular system (11, 12). However, here only the subjectively assessed noise annoyance was documented, not the objective noise exposure (sound levels).

Epidemiological evidence of the association between noise and cardiovascular disease

Because of the recent increase in traffic, scientific evaluation of the health-related effects of noise is receiving increasing attention. Epidemiological research into the impact of noise has increased considerably in both quantity and quality in recent years. Methods for calculation/standardization of noise exposure have improved, larger populations have been studied, and there has been better correction for confounding variables. Furthermore, phenomena such as habituation, sensitization, conditioning, and exhaustion are adequately represented by the reproduction of daily living conditions in epidemiological studies. The most powerful studies are on the topics of coronary heart disease, myocardial infarction, stroke, and hypertension (eTable).

Because increasing traffic not only represents a noise problem but also leads to greater emission of air pollutants, it is necessary to ascertain the independent effects of these two variables. Despite the high correlation of the two parameters, the assumption is that noise and air pollutants have independent negative impacts on the cardiovascular system (16).

Cohort studies that controlled for air pollutants, socioeconomic status, and lifestyle factors identified a significant association between road traffic noise and the occurrence of myocardial infarctions (17, 18). The data from a large Danish cohort (N = 50 744) showed that exposure to road traffic noise (10-year mean), independent of the air NO2 concentration, was associated with a hazard ratio (HR) of 1.12 [1.03; 1.21] per interquartile range Lden (17). The findings were similar in a Swedish cohort (OR 1.38 [1.11; 1.71] for road traffic noise ≥ 50 vs. <50 dB(A) LAeq,24h [unweighted 24-h level] after exclusion of persons with hearing loss or exposure to other sources of noise (18).

A meta-analysis of 24 studies by van Kempen and Babisch revealed that road traffic noise is associated with an elevated risk of the occurrence of high blood pressure (OR 1.034 [1.011; 1.056], starting at 45 dB(A) and per increase of 5 dB(A) LAeq,16h ) (24). This analysis was restricted to cross-sectional studies, so the power of any conclusions about the causal role of noise is limited. However, large prospective studies have demonstrated that both aircraft noise and road traffic noise exposure are associated with an increased risk of hypertension (25–27), with stronger effects for aircraft noise at night (OR 2.63 [1.21; 5.71] per increase of 10 dB(A) Lnight) than for road traffic noise (RR 1.03 [0.99; 1.07] per increase of 10 dB(A) Lden) (27).

The investigators involved in the NORAH study (Noise-Related Annoyance, Cognition, and Health) of persons resident in the Rhine–Main region (in and around Darmstadt, Mainz, and Worms) found that traffic noise was associated with an increased risk of heart failure or hypertensive heart disease (greatest increase in risk, of 3.1% for rail traffic noise per increase of 10 dB(A) LAeq,24h [2.2; 4.1%]) and of myocardial infarction (greatest increase in risk, of 2.8% for road traffic noise per increase of 10 dB[A] LAeq,24h [1.2; 4.5%]) (28, 29). Analyses of the risk of hypertension, however, showed no significant associations with noise exposure from aircraft, road traffic, or rail traffic, although it must be pointed out that the study suffered from methodological deficiencies in blood pressure measurement and limited inclusion of confounding factors (30).

In conclusion, it can be stated that large studies of high methodological quality that controlled for airborne pollutants, lifestyle factors, and other important confounding factors were able to demonstrate a systematic association of exposure to traffic noise with the risk of cardiovascular disease (Figure 3).

The pathophysiological mechanisms by which noise causes more cardiovascular illness have not yet been fully elucidated and are a topic of ongoing research (Box). The assumption is that long-term noise leads to stress reactions or noise annoyance reactions, which in turn, via activation of the sympathetic nervous system and increased excretion of stress hormones (5, 9), favors the development of oxidative stress and inflammatory processes, resulting in disruption of vascular and endothelial function (32–34). As well as the emergence of endothelial dysfunction and the associated negative impact on blood pressure regulation, the noise-related development of further risk factors such as elevated blood pressure, rises in blood lipids and blood sugar, increased cardiac output, raised blood viscosity, and activation of blood coagulation leads to a higher risk of cardiovascular disease (4).

Epidemiological studies have shown that noise from aircraft, road traffic, and rail traffic represents a significant risk factor for the development of cardiovascular disease. The research involved in these studies has identified important pathophysiological factors that will enable development of drug treatment strategies to minimize the harmful effects of noise on the human organism. Particularly on the basis of the new WHO noise guidelines (3), which, in summary, state an RR of 1.08 [1.01; 1.15] for the occurrence of coronary heart disease, starting at 50 dB(A) and per increase of 10 dB(A) Lden in connection with recommendations for much lower mean noise levels during the day and at night (aircraft noise: 45 dB[A] Lden and 40 dB[A] Lnight; road traffic: 53 dB[A] Lden and 45 dB[A] Lnight; rail traffic: 54 dB[A] Lden and 44 dB[A] Lnight), it is urgently necessary to introduce measures for adequate protection of the population from the negative health effects of environmental noise.

Our goal in writing this article was to give a selective overview of the most important recent research findings, reviewing systematic analyses and large cohort studies in the light of our own experience. This approach entails limitations, particularly due to the selective inclusion of primary studies and meta-analyses that vary with regard to quality of results, controlling for confounding factors, operationalization of endpoints, and statistical methods, making it difficult to compare their findings. Nevertheless, overall the results of the studies presented here reinforce the contention that noise significantly increases the occurrence of cardiovascular disease.

Conflict of interest statement
Prof. Daiber coordinated third-party funding for a research project from the Boehringer-Ingelheim Foundation and the Mainzer Herz Foundation. 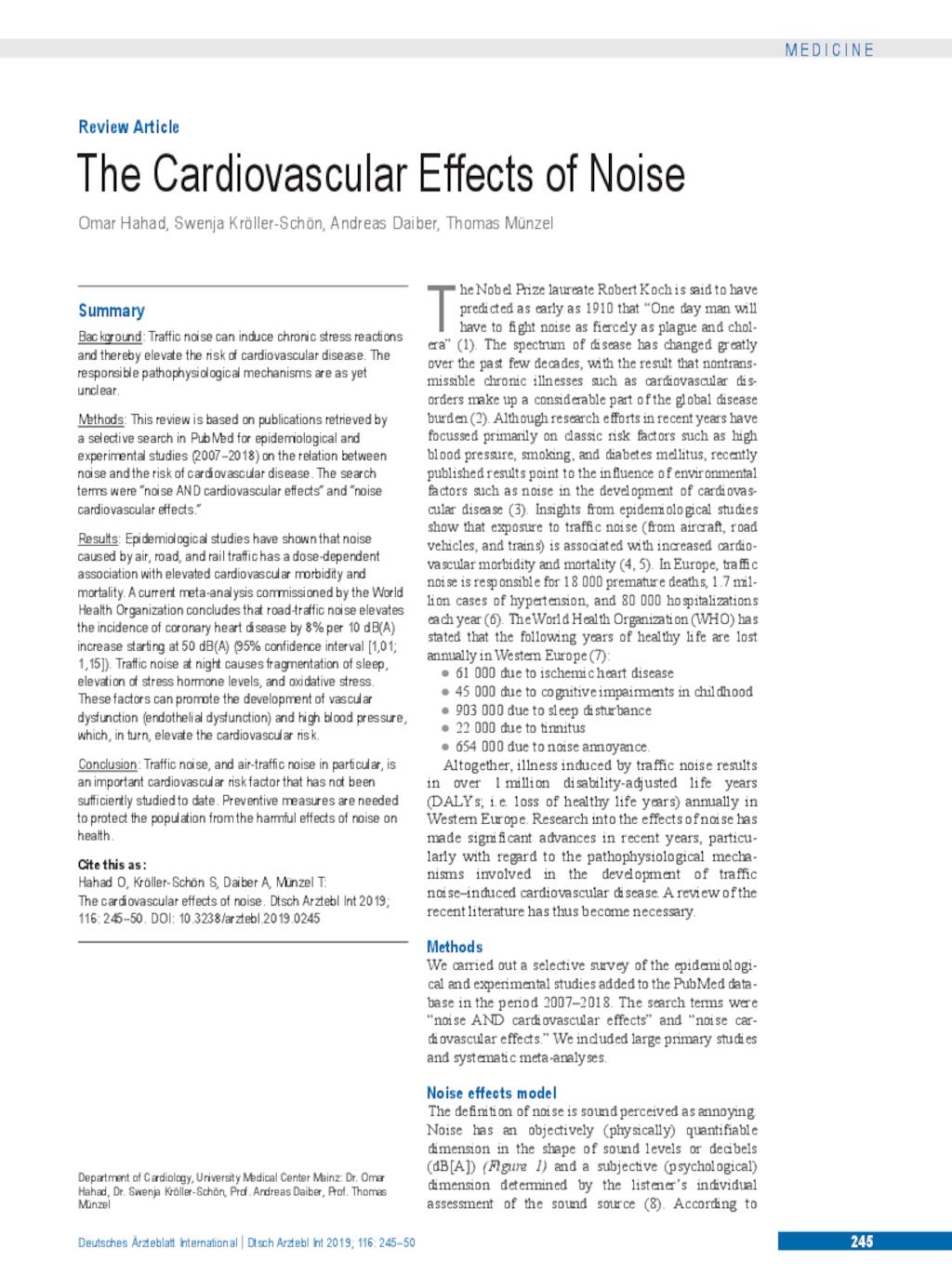