Craniopharyngioma: The Benefits of a Conservative Approach

Dtsch Arztebl Int 2019; 116: 319-20. DOI: 10.3238/arztebl.2019.0319
An editorial to accompany the article “The postoperative quality of life in children and adolescents with craniopharyngioma: results of a prospective multicenter study,” by Maria Eveslage and colleagues, in this issue of Deutsches Ärzteblatt International

Craniopharyngioma, a tumor of the sellar region, is a serious and rare disease. Its rarity has made informative studies with large case numbers hard to perform. One such study is reported in this issue (1). For many years, radical surgery to remove the tumor as completely as possible was the preferred treatment strategy, and little scientific attention was devoted to the ensuing quality of life. The study reported here is a new milestone in this respect as well.

A strategy of limited, hypothalamus-sparing surgery and subsequent radiotherapy has been increasingly used in recent years because of the high risk of adverse sequelae with radical treatment. As the current study shows, this more conservative strategy yields a better quality of life as perceived by the affected children themselves. Both preoperative involvement of the posterior hypothalamus and subsequent surgical damage to it are associated with a lower self-assessed quality of life, while damage to anterior hypothalamic areas is not. A further main finding of the study is that the self-assessed quality of life does not settle the question whether postoperative radiotherapy is best performed right after surgery or only on progression of the residual tumor.

Craniopharyngiomas grow in a critical region of the brain and must therefore be treated to prevent serious and, in the end, perhaps fatal damage. There is no current option for drug treatment. Postoperative radiotherapy is widely used to slow tumor growth. The surgical approach is either transsphenoidal (through the nose and sphenoid sinus) or transcranial (through an opening in the skull), with the goal of either total or subtotal resection. Tumors with a predominant cystic component can also be treated by repeated cyst emptying through an implanted catheter, and hydrocephalus that does not resolve after tumor resection alone can be treated with a cerebrospinal fluid shunt. Harvey Cushing reported the earliest large case series in the first half of the 20th century, describing the typical serious manifestations of the disease itself as well as the marked surgical risk, with over 20% mortality. Cushing himself later preferred less radical resection (2). In the late 1990s, Rudolf Fahlbusch and colleagues in Erlangen, Germany, described a standard surgical strategy and reported the largest series to date with good outcomes and low mortality (1.1% for primary transcranial procedures, 0% for transsphenoidal procedures) in both children and adults (3). A special focus of these investigations was on tumor control, postoperative morbidity and mortality, and endocrine manifestations. From the 1990s onward, Hermann L. Müller of Oldenburg, Germany, coordinated studies on childhood craniopharyngioma and its interdisciplinary management, including an observational study entitled “KRANIOPHARYNGEOM 2000” (4, 5). The ensuing debate on detailed treatment strategies implied the need for a prospective (partially randomized) study; this was the subsequent “KRANIOPHARYNGEOM 2007” study, whose results with respect to quality of life are now reported here.

Treated craniopharyngioma is associated with a high ten-year survival rate of approximately 92%, but hypothalamic damage from the disease or its treatment can have serious manifestations that impair the patient’s quality of life (3). Studies to date have shown that major long-term adverse sequelae, such as adipositas permagna, are mainly due to posterior hypothalamic involvement (whether by tumor infiltration or by operative trauma). In view of the risk of permanent damage and the manifold challenges of long-term patient care, craniopharyngioma is now nearly always treated in an interdisciplinary collaboration from the outset: alongside pediatricians and neurosurgeons, the treatment team can also include radiotherapists, neuroradiologists, endocrinologists, and psychologists. There is much debate over the degree of expertise that should be made a prerequisite to the treatment of this rare disease, and not only with respect to the neurosurgical procedure itself. Restricting the treatment of craniopharyngioma to a few highly expert centers would create difficulties for families that do not live nearby, as repeated or prolonged stays near the treatment center are likely to be needed. It may well be better to create networks for the exchange of clinical experience. The surgical treatment of craniopharyngioma does not require any more sophisticated manual neurosurgical skills than other comparable brain tumor or cerebrovascular procedures in children and adults.

Patients’ descriptions of their own perceived quality of life in terms of the realities of their day-to-day living should play a larger role in the assessment of medical treatment in general. Such considerations are often decisive in determining whether the patient subjectively views the treatment as a success or a failure (6). The study “Postoperative Quality of Life in Children and Adolescents with Craniopharyngioma“ combines a randomized trial on the optimal timing of postoperative radiotherapy after incomplete resection, with an observational arm concerned with the patients’ subjective quality of life. The authors terminated the initially randomized component of the study before its planned end because there was no longer any expectation that a further difference could be demonstrated with respect to the primary endpoint, i.e., the timing of radiotherapy (“stop for futility”).

The authors now present “KRANIOPHARYNGEOM 2019,” a registry study under the aegis of the German Society for Pediatric Oncology and Hematology, which is planned to capture all patients with craniopharyngioma in multiple centers. Valid long-term data on quality of life after radiotherapy can only be obtained with prolonged follow-up. There is no effective treatment for hypothalamic damage at present, and there is thus a need for new interventional approaches to the treatment of hypothalamic morbidity. This is important because, for most patients, the hypothalamic disturbance is due to preoperative hypothalamic infiltration by the tumor, rather than operative damage. Finally, the comparative course of childhood and adult craniopharyngiomas and their histologic subtypes (mainly adamantinous in children, mainly papillary in adults) is a further relevant, but little-studied topic. More data might enable the development of suitable, specific forms of treatment (7, 8).

Conflict of interest statement
Prof. Clusmann has served as a paid consultant to Medtronic on the topic of intracranial laser ablation.

Dr. Höllig states that she has no conflict of interest. 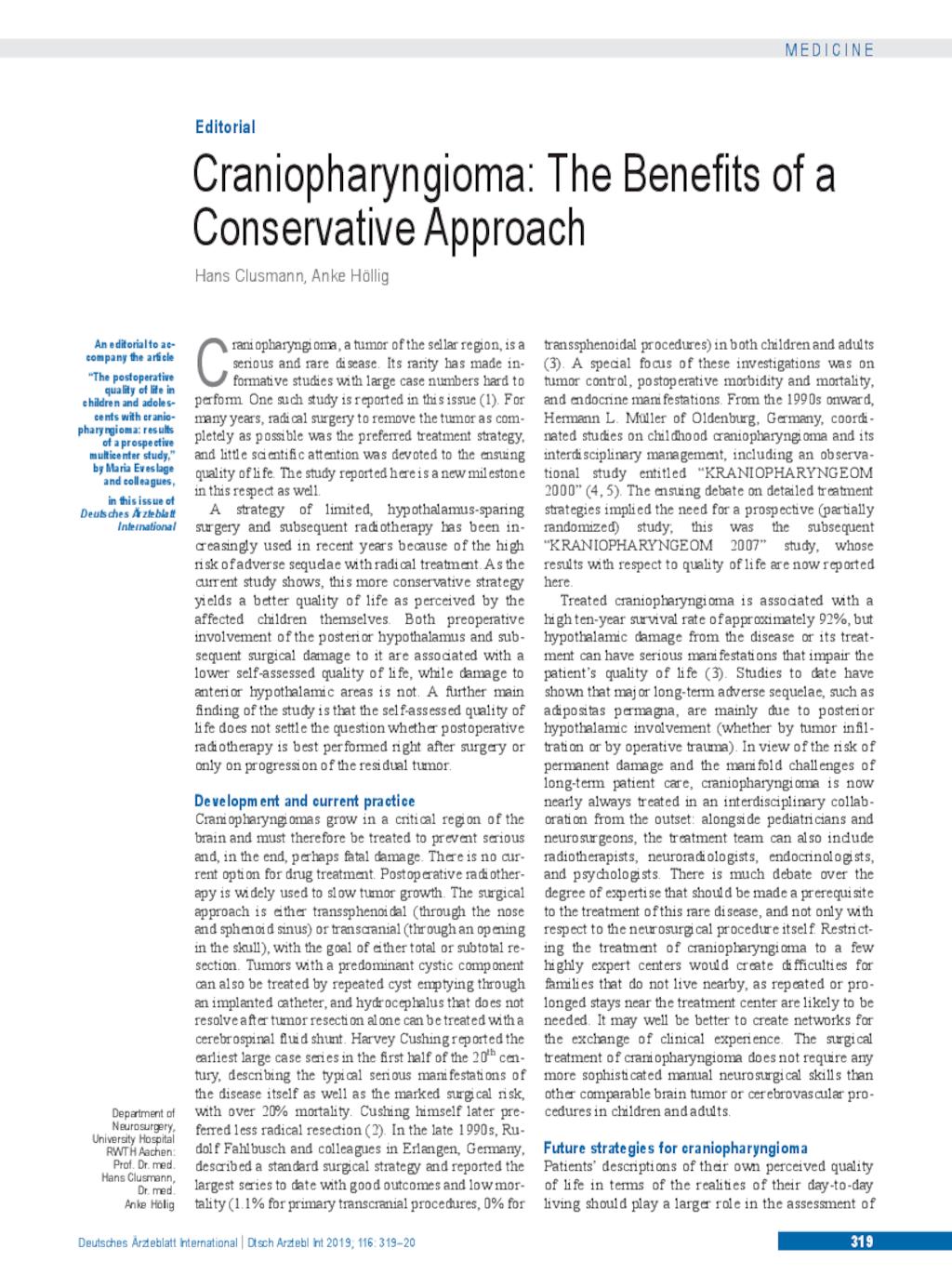