The classification of guidelines according to the rules of the Association of the Scientific Medical Societies in Germany (AWMF) defines the system of the guideline development process with regard to the methodological approach (therefore: “S classes”), not with regard to the quality of the available data (evidence from clinical studies). Thus, a guideline of the S3 class must fulfill the following requirements, which are fulfilled by the S3 guideline on Lyme neuroborreliosis (1):

The hypothetical assumption that CSF testing could be unremarkable in patients with late-stage Lyme neuroborreliosis and that approximately 30% of cases with Lyme borreliosis are found to be seronegative in the late stage of the disease, is not supported by evidence. Furthermore, this assumption contradicts the infection-pathophysiological rationale. During a supplementary conference held on 17 January 2017, the related literature cited by the DBG members was evaluated and discussed in detail by the signees—also in the presence of a mandate holder of the DBG. The above mentioned assumptions could not be substantiated by any of the cited studies.

The lymphocyte transformation test (LTT) for Borrelia is not suitable for routine testing as it lacks sensitivity and specificity. For the available of evidence from studies, please refer to the microbiological guideline on the laboratory diagnosis of Lyme borreliosis (2).

The post-treatment Lyme disease syndrome (PTLDS) is defined as persisting unspecific symptoms which can occur after treatment of Lyme borreliosis. In patients with PTLDS, typically no chronic infection with Borrelia burgdorferi is detected. Consequently, no benefit is to be expected from repeated or long-term microbial therapy; to the contrary, this strategy is associated with a risk of serious side effects. To address this problem, three studies offering class I evidence are comprehensively delineated in the guideline (3–5).

Controlled treatment studies and case series on Lyme neuroborreliosis have found no indication of pathogen persistence after two to three weeks of antimicrobial therapy. In the guideline, a pragmatic approach to potential exemptions is proposed. The publication of Middelveen et al. cited by the DBG members does not contribute to a better understanding of this question at all, because none of the twelve patients in this study suffered from Lyme neuroborreliosis which was confirmed clinically and by CSF testing.

Prof. Rauer owns stock in the ravo Diagnostik company (Freiburg), which manufactures serologic tests for the diagnosis of Lyme borreliosis. He received payment for medical evaluations relating to the topic of the article from various judicial bodies and insurance companies. He received lecture fees from Biogen. 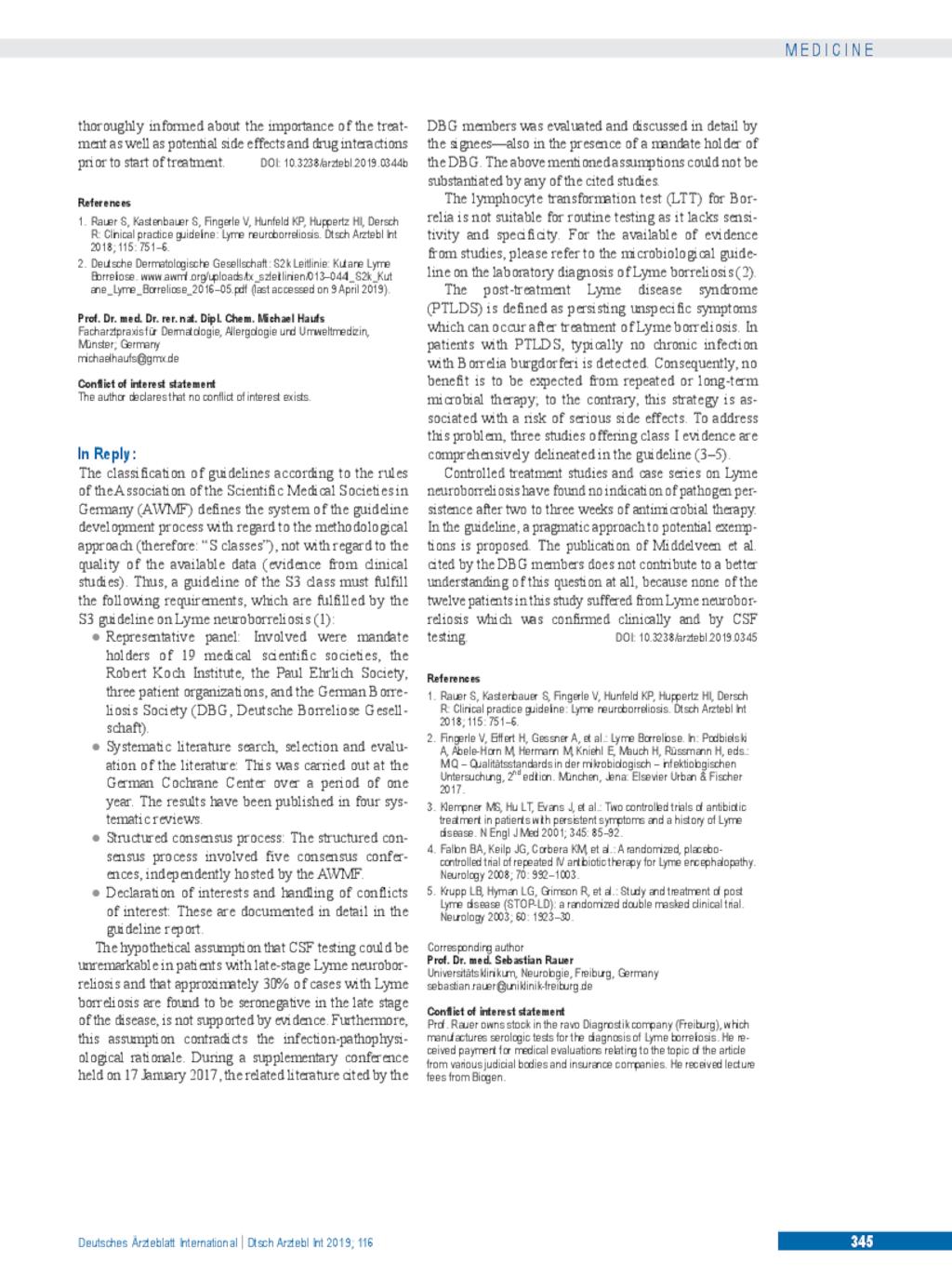