A randomized single-center trial in an elective gastrointestinal surgery setting

Methods: In a prospective, randomized, single-center study, patients undergoing elective gastrointestinal surgery were intraoperatively randomized to skin closure either with an intracutaneous suture or with staples. The primary endpoint—the occurrence of a grade A1 wound infection within 30 days of surgery—was evaluated according to the intention-to-treat principle.

In 1999, the US Centers for Disease Control and Prevention (CDC) in Atlanta, USA, developed an internationally recognized and accepted classification for surgical site infections and devised a guideline for preventing these (7) (Table 1), which was updated in 2017 (8). In Germany, the CDC criteria were adopted and implemented by the Robert Koch-Institute (National Reference Center for the Surveillance of Nosocomial Infections) (9, 10). The World Health Organization in its Global Guidelines for the Prevention of Surgical Site Infection recommends 29 preoperative and intraoperative measures to prevent surgical site infections (11).

In spite of evidence based preoperative antiseptic measures, the patient’s own flora is considered to be the main source for surgical site infections and causes endogenous infections with a ratio of 90% to 10% compared with exogenous infections as a result of contamination with external substances (7). No difference was found regarding the preoperative preparation of the skin, (12). Flushing wounds before suturing leads to a significant reduction in surgical site infections, especially in colorectal surgery (13). Wound healing can be affected, among others, by (9, 14–18):

The treating surgeon can influence most of these factors only to a limited degree. A universally applicable option for optimizing surgical site healing in every patient may be the selection of the “correct” suturing material and the “correct” suturing technique for skin closure. To date, hardly any prospective data exist on the skin closure technique after gastrointestinal surgery. Six randomized trials since 1981 have studied the occurrence of wound infections after using staples or sutures in visceral surgery (19–24). The study populations and designs were heterogeneous, and different suturing techniques and materials were used (25, 26), so no unequivocal results in favor of sutures or staples were collected. A Japanese study showed (19) in a subgroup analysis that using subcoreal sutures in the subgroup of patients who had surgery of the lower gastrointestinal tract resulted in a significantly lower rate of surgical site infections than staples. Another prospective randomized trial from 2016 of 401 patients showed no difference in the occurrence of surgical site infections between subcuticular sutures or staples used in abdominal surgery (20).

Ultimately, on the basis of existing data, no unequivocal recommendation can be made for the optimal skin closure technique after elective gastrointestinal procedures. We conducted a prospective randomized trial that compared the use of continuous intracutaneous sutures and staples with regard to the development of surgical site infections after elective gastrointestinal surgery (27).

The study was conceived as a single center prospective randomized controlled trial with an intervention group and an active control group. In the intervention group the skin was closed by using continuous absorbable intracutaneous sutures (Mososyn 4–0 [glyconate] “suture group”), in the control group, staples were used (WECK Visistat 35W 6.5 × 4.7 mm, “staples group”).

The ethics committee of Philipps University of Marburg approved the study. The study was registered with the German Clinical Trials Register (DRKS 00004542). The study protocol was published (27).

Exclusion criteria were antibiotic treatment within the 14 days preceding the operation and inpatient admission more than 4 days before the procedure. Patients who had already undergone midline or transverse laparotomy were excluded if the same access was reopened for the current procedure.

The primary endpoint of the study was the occurrence of an A1 surgical site infection according to the CDC classification (7) within 30 days after the operation, diagnosed by the treating surgeon. According to the CDC criteria, A1 surgical site infection was defined as an infection of the skin incision within 30 days postoperatively, which affected only skin or subcutaneous tissue (7) (Table 1).

Participating patients were randomized to the suture group or staples group intraoperatively after fascial closure by means of a telephone call 1:1 in the coordinating center for clinical studies of the Philipps University of Marburg. The randomization method was based on a randomization list generated in the center with permuted blocks of random lengths. The results of the randomization was communicated to the treating surgeons only during the phone call preceding fascial closure.

Course of the study

The published protocol described the course of the study in detail (27). The surgical procedure in both groups was unaffected by participation in the study, as the intervention related only to the skin closure. Surgeons were unblinded after the procedure had been completed and the fascia closed.

Skin closure was undertaken either by the primary surgeon or the assistant, in accordance with daily clinical routine.

The sample size calculation was based on a retrospective evaluation of internal hospital data of 387 patients from 2009 and 2011. We assumed an A1 surgical site infection rate of 14% in the staples group and 4% in the sutures group. A sample size of 128 patients per group achieves 80% power in the chi-squared test, with a two-tailed significance level of 0.05. Under the assumption of a dropout rate of 10%, a total of 286 patients were randomized.

Figure
Flow of participants through the study (CONSORT)
Enlarge All figures

The demographic and clinical characteristics of patients in both groups were balanced, only the patients’ age was slightly higher in the sutures group (Table 2). The type of surgery, operative access, length of skin incision, thickness of subcutaneous fatty tissue, intraoperative blood loss, and extraordinary contamination of the surgical site did not differ in the two groups (Table 2).

Univariate logistical regression showed an association between the type of operation and the rate of surgical site infections (P=0.04; likelihood ratio test). A1 surgical site infections manifested most commonly after operations of the lower gastrointestinal tract (colorectal procedures, 32 out of 165 patients, 19.4%), followed by hepatobiliary and pancreatic surgery (8 of 71 patients, 11.3%) and operations of the upper gastrointestinal tract (2 of 44 patients, 4.6%) (Table 3). This association remained significant even if the type of skin closure in the multiple regression was added (data not shown).

Of note is the fact that in the staples group, cases of wound dehiscence increased once staples were removed on the 10th day (21 of 139 patients, 15.1%), which were not classed as surgical site infections according to the CDC classification, although they still represented a wound complication. Wound dehiscence was less common in the sutures group (4 of 141 patients, 2.8%; P=0.0002). This result was notable in the context of the study.

The time required to close the skin was on average 6 minutes longer in the sutures group with a mean duration of 7.4 minutes versus 1.3 minutes in the staples group (P<0.0001). The average inpatient stay was 12 days for both groups (IQR 9–17). The cosmetic result and length of sickness absence were not evaluated because of incomplete data.

None of the evidence-based recommendations issued by health organizations for the prevention and treatment of surgical site infections takes into account the skin closure technique (9–11). Only two multicenter randomized controlled trials (RCTs) compared subcuticular sutures and staples for skin closure after gastrointestinal operations (19, 2). Tsujinaka et al. did not find a significant difference between the two techniques in 1080 patients in 24 hospitals; but a subgroup analysis showed a reduction in the rate of surgical site infections when subcuticular sutures were used after colorectal operations (19). A further multicenter study including 401 patients confirmed this result (20).

The current study is the first to compare prospectively the occurrence of A1 surgical site infections in elective gastrointestinal surgery after using intradermal sutures or staples. The two skin closure techniques were selected intentionally because of their differences with regard to application and tightness of the closure. Both skin closure techniques have advantages and disadvantages. Staples are applied quickly by using a one-way stapler. This reduced the time taken by the surgery (19, 20), as was also obvious in our study. After an appropriate healing period, the staples will have to be removed. The theoretical disadvantage of a stapled scar is the fact that skin closure is not tight/continuous, but point by point. Furthermore, staples often damage hair follicles, sweat glands, and sebaceous glands. With regard to the patient’s own flora as the main source of surgical site infections, tight skin closure without injury to dermal structures might possibly help prevent surgical site infections. For this reason we chose continuous intracutaneous sutures as the comparator group. Intracutaneous sutures are generally accepted for the closure of clean wounds, but are regarded with skepticism in gastrointestinal surgery. Intracutaneous sutures promise tight closure of the epidermis without compromising dermal structures. Dissolvable/absorbable sutures do not have to be removed, which makes them more comfortable for patients. Cosmetic results have been rated positively. The disadvantages of intracutaneous sutures are their low stability/robustness and possible skin perforation with local inflammation.

Of note were the many occurrences of wound dehiscence (15.1%) after removal of staples on the 10th postoperative day, which did not represent a surgical site infection but did represent a surgical site complication. Almost no wound dehiscence was seen in the sutures group (2.8%). When considering any kind of wound complications—infection and dehiscence—then intracutaneous sutures emerge as more beneficial: 23/141 patients (16.3%) in the sutures group versus 42/139 patients (30.2%) in the staples group (OR 0.45; [0.25; 0.80]; P=0.006). Although our study was not a non-inferiority study, the results show that intracutaneous sutures in gastrointestinal surgery are non-inferior to staples with regard to the rate of surgical site infections, and are more beneficial with regard to wound dehiscence.

The limitations of this study include the fact that it is a single center study. Study participants had to meet stringent inclusion criteria; more than 750 patients were screened in order to randomize 286 patients. The study was characterized by a standardized patient selection undertaking of the intervention. Furthermore, the follow-up at four time points, with photographic documentation of the wound findings, was very precise.

Our sincerest thanks go to the patients who participated in our study. Further, we wish to express our thanks for financial funding of our study in the context of the cooperation agreement between the University Hospital of Giessen and Marburg GmbH and the Philipps University of Marburg.

Figure
Flow of participants through the study (CONSORT)
Enlarge All figures

Table 3
Enlarge All figures
Superficial Surgical Site Infection Following the Use of... 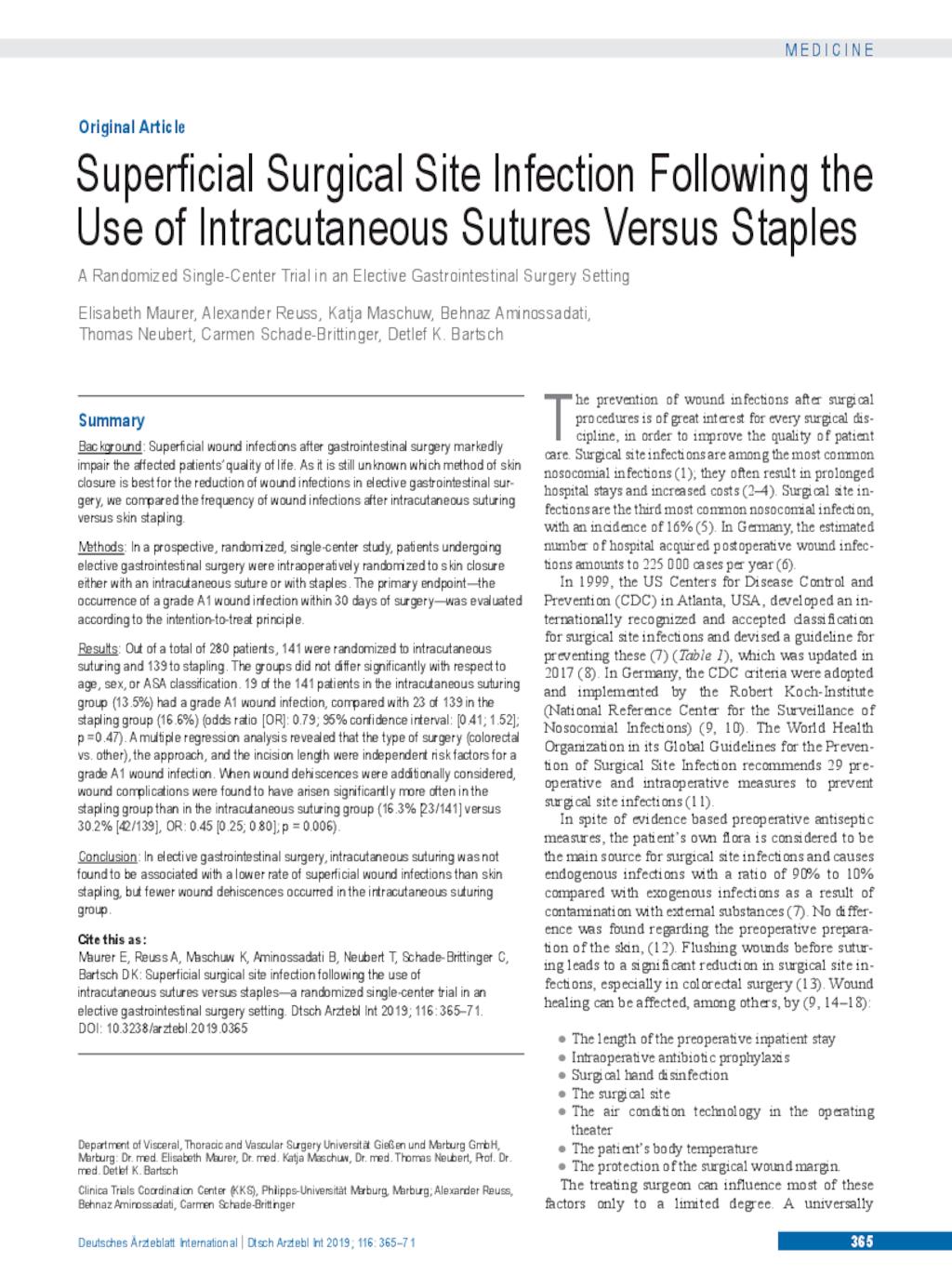