The Long Road of Inquiry Following Sex Abuse by Clergy

Dtsch Arztebl Int 2019; 116: 387-8. DOI: 10.3238/arztebl.2019.0387
Editorial to accompany the article: “Sexual Abuse at the Hands of Catholic clergy—a Retrospective Cohort Study of Its Extent and Health Consequences for Affected Minors (the MHG Study)” in this issue of Deutsches Ärzteblatt International

Deutsches Ärzteblatt, the renowned journal of the German Medical Association, has published an original article about sexual abuse of minors by clergy of the Catholic Church (1). Would that have been possible 20 years ago or earlier? I don’t think so.

For the last 20 years, the Catholic Church has been with its back against the wall regarding the issue of sexual child abuse by clergy or in Catholic institutions. Investigations and commissions to inquire into child sexual abuse in the USA, Australia and Ireland had addressed the issue—on the initiative of and under pressure from affected persons. In 2012, the forensic psychiatrist Leygraf and coworkers (2) published a study based on psychiatric expert opinions about Catholic clergy in German dioceses. To widen the perspective on the issue, one should, once again, take a look at this study which had a simpler design than the recent MHG study. The proportion of clergy with pedophilic problems was small, while clergy with homosexual orientation were common; there was a large proportion of clergy without partner-directed sexual experiences.

History and setting of the MHG study

In 2011, the German Bishops’ Conference decided to review the personnel records of clergy for evidence of sexual abuse; a project, initially awarded to the criminologist Prof. Christian Pfeiffer. This project was terminated by the German Bishops’ Conference in 2013—because, according to Bishop Ackermann, the relationship of trust had been broken. However, the German Bishops’ Conference remained with the back against the wall. Faced with allegations of censorship and concealment, in addition to data protection issues, it re-tendered the project. This was a rather unexpected move. Working groups to be regarded as competent in the field were concerned with the question whether independent research was at all possible under such pressure, before applying for this project.

The aim of the present study was “to work out how the insights from the MHG Study can be translated into clinical practice“. Here, the scope is broad and the challenges are considerable. To, at the same time, understand the study’s limitations, it is advisable to carefully read the detailed eMethods section. It reveals that the epidemiological data were obtained from the analysis of personnel records of clergy. The second important point is that, for data protection reasons, the files were not searched by the research consortium’s academic staff, but by staff of the dioceses—a potential conflict of interest. Information about the inter-rater reliability was not reported in the article. Ultimately, this study is based on acts documented in the personnel records which are considered as sexual abuse of minors—a mixture of reported and unreported offences as well as a rather wider or narrower definition of sexual abuse. The cases of accused clergy peaked between the 1960s and 1980s, i.e. during a period in the past. Here, it should be added that almost 30% of cases were reported for the period up to 1960.

This is important for the discursive placement of the events and shows three things:

The available data do not allow to clarify what the situation is at present. Dreßing et al. highlight in their discussion that there are institution-specific aspects, but also risk constellations for child abuse by clergy, for example sexual moral, attitude towards homosexuality, and dealing with celibacy and secrecy of confession (1). The latter points, in particular, should be investigated in further studies.

The role of the medical community

Dreßing et al. attribute significantly more importance to the role of the medical profession in this field than it has been perceived earlier. There is a strong need to heighten the awareness of sexual violence against children in the medical community. Here, the focus of the activities is primarily on pediatricians and general practitioners, but also on counselling services. It should be acknowledged and perceived as a genuine medical activity that sexual health, as defined by the World Health Organization, requires doctors to address, in a sensitive manner, sexuality and potential sexual problems. This skill should already be taught to medical students, as it is, for example, the case in the model degree course medicine (iMED) at the University Medical Centre Hamburg-Eppendorf (3). It requires only few hours of the compulsory curriculum and leads to significant and testable achievements in students. Of course, the numerous post-graduate further training and advanced training opportunities represent efforts in the same direction. An important milestone was reached when the last German Medical Assembly (Deutscher Ärztetag) resolved to introduce the additional qualification of “sexual medicine” (4). Nevertheless, this issue is not solely the responsibility of experts. It is a civil society and political challenge for all of us to face the issue of sexual child abuse. Key starting points for dealing with this challenge include working through the past—an approach taken, for example, by the Independent Inquiry Into Sexual Child Abuse in Germany (Unabhängige Kommission zur Aufarbeitung sexuellen Kindesmissbrauchs) (5)—, the current care situation in medical-therapeutic and advisory settings and finally the prevention of sexual child abuse.

Translated from the original German by Ralf Thoene, M.D 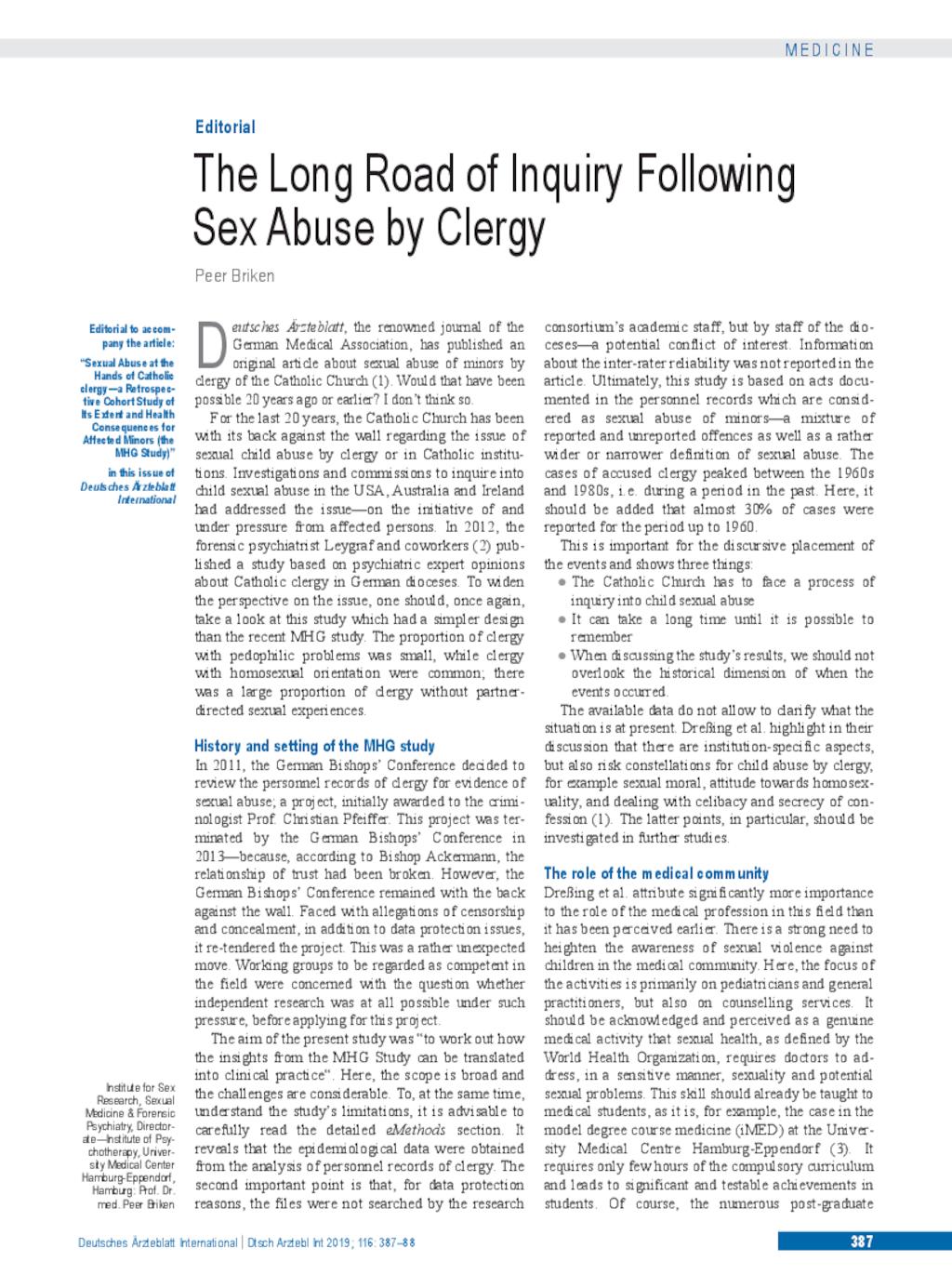