Mortality and Medical Comorbidity in the Severely Mentally Ill

Background: Mentally ill patients die on average 10 years earlier than the general population, largely due to general medical disorders. This study is the first to explore in a large German sample the prevalence, mortality, and medical comorbidity in patients with severe mental illness (SMI). The patients were affected by borderline personality disorder (BPD), psychotic disorders, bipolar disorder, or severe unipolar depression.

Methods: Our database consists of billing data from all adults with statutory health insurance in Germany. Twelve-month administrative SMI prevalence and medical comorbidity were estimated using cross-sectional data from 2016 (age ≥ 18; N = 59 561 310). Two-year mortality was established longitudinally in a randomly selected subset of the billing data (most recent mortality information available for 2012 to 2014; 2012: n = 15 590 107).

Conclusion: Mortality is substantially elevated in all SMI patients. The results underline the need to remove barriers to adequate general medical care, both on the patient and the provider side, to reduce excess mortality.

In a recent meta-analysis, Walker and colleagues (5) revealed that mortality in mentally ill patients is more than twice as high as in the general population, with two third of the deaths being due to natural causes. In total, an estimated 8 million deaths worldwide (14.3%) are due to mental disorders every year and the reduction in life span is estimated at 10 years (median) (5). Some authors have described even greater shortening of life, between 13 and 30 years (6, 7). In Germany, the number of seriously mentally ill adults is estimated at 1–2% of the population, i.e., up to 1 million affected individuals (8). The global burden of mental disorders is a serious public health problem (9, 10). Alongside unnatural causes of death such as accidents and suicide, the increased number of premature deaths is largely attributable to physical illness such as cardiovascular disease and endocrine and metabolic disorders (3, e1). Cardiovascular disease is the leading cause of death in the general German population (11).

To extend the research findings to BPD, we conducted the first population-based registry study using adult data from all statutory health insurance funds in Germany, representing a very large collective (age ≥ 18; N = 59 561 310). Previously, no such study could be conducted in Germany, a country with some of the strictest data protection regulations in the world (12), and until recently no national claims data composed of persons insured by all statutory health insurance funds were available for such analyses. Since BPD has not been included in this context before, in Germany or elsewhere, the present study makes a unique contribution to the understanding of comorbidity and mortality in SMI.

We set out to quantify:

Twelve-month prevalence and medical comorbidity of SMI patients were examined cross-sectionally using the latest available billing data (2016: age ≥ 18 years; N = 59 561 310). Patients who had no contact with the health system in 2016 were not included in the analyses.

Based on clinical and theoretical considerations, a selected range of general medical conditions were specified according to ICD-10 code and relevant risk factors of mortality and included in comorbidity analyses (eTable 1).

The local ethics committee of the Faculty of Medicine, RWTH Aachen University, raised no ethical or professional objections to the research project.

In order to evaluate whether significant ORs were also substantial in terms of effect size, we selected the established cut-offs originally proposed by Chinn (15): OR >1.436 and OR <0.696. Base rates of all medical diagnoses are provided to enhance interpretation of ORs (eTable 1).

Loss of life years was estimated using statistical life tables for the general German population in 2014 (eMethods) (17). The difference in life expectancy between the total population and a particular SMI population was taken as proxy for lost life years.

There were no substantial decreases in comorbidities or risk factors (OR <0.696), but a significant effect was found for psychotic disorders with regard to malignant neoplasms (OR = 0.90; eTable1).

eFigure
Age-dependent mortality in patients with SMI and in patients without the specific SMI, together with the relative risk (SMI vs. no SMI) over the whole adult life span
Enlarge All figures

eTable 3
Estimated loss of life years by age in SMI patients compared with the total population (administrative data of all statutory health insured adults in Germany, age = 18 years*1, 2013 to 2014)
Enlarge All figures

The present study focused on excess mortality and medical comorbidity in people with severe mental illness (SMI), a highly relevant topic with regard to sociopolitical equity and health care participation (19). Analyses of SMI comorbidity revealed many clinically significant associations contributing to excess mortality due to natural causes.

Although the risk of suicide is highly elevated in SMI patients, the excess mortality can mainly be attributed to somatic causes. According to official statistics for the period 2013 to 2014, in Germany around 1.2% of all deaths are documented as suicides (18).

Based on the assumption from previous findings that up to 90% of completed suicides are associated with mental disorders in general (5, 20, 21), we estimated that the SMIs included in our study (which are more severe but less prevalent) accounted for 70% ofcompleted suicides. Thus, our data suggest that 24% of SMI excess mortality per year can be attributed to suicide and 76% to somatic causes (i.e., medical morbidity) or other, unnatural causes (eMethods). In part our findings replicate long-standing data on poor medical health in people with SMI (1–5), and our results suggest good external validity of the data.

Nonetheless, compared with recent reviews, excess mortality seems relatively low, although within the range of most studies. One reason might be that the German social and healthcare systems offer relatively good free general access to mental and medical care. Furthermore, our prevalence estimates are conservative, since SMI patients with zero contact to the health care system are not represented.

The statutory health insurance database is unique in covering the majority of SMI patients in Germany. The proportion of SMI can be assumed to be lower in the privately insured population than in those with statutory insurance (22). Moreover, routine data are not affected by selection bias with regard to recruitment or participants’ willingness to participate in a study.

Nevertheless, routine records and thus administrative prevalences are usually less valid than datasets based on standardized diagnostic procedures (23, e3). The inclusion of only severely ill patients in the current study contributes to higher validity of the diagnoses. As a consequence, however, the findings may not be generalizable to less severe disease courses. Furthermore, we must assume that the true SMI prevalence is higher than reported here due to patient- and healthcare system-related factors such as underutilization, nonrecognition, undertreatment, stigmatization, and inadequate mental health services in certain regions (24).

Potential flaws in SMI diagnostics may impair the validity of associations of SMI with medical comorbidity and mortality: Underdiagnosis, for example, leads to underestimation of association effects in patients who make use of healthcare services. However, in patients who do not use these services, underdiagnosis contributes to neither overestimation nor underestimation of associations. Counterintuitive findings such as lower medical comorbidity (e.g., disorders of lipoprotein metabolism, cardiac arrhythmia) in psychotic disorders than in other SMIs, despite the fact that this group has the highest mortality rates, may be due to underrecognition and undertreatment (25, e3). Assuming that this bias applies to SMI patients in general, medical comorbidity—but not mortality—may be under-estimated.

It is conventional to define SMI on the basis of specific coded diagnoses (26) but one should not neglect the fact that other mental disorders can also be associated with severe distress, role impairment, and disability.

Considering the lack of direct measures of severity (e.g., a score ≤ 50 on the Global Assessment of Functioning scale [27]), we believe that our diagnosis-based approach (including the addition of BPD to conventional SMIs) is the most feasible way to address medical comorbidity and mortality in patients with SMI.

The dataset does not include information on:

Since SMIs are very probably less prevalent in privately insured patients (no statistics available), the findings of the present study are representative only for patients with statutory health insurance (22).

Patients who (within a given year) visit only psychiatric hospital outpatient services before or after hospitalization and patients with exclusively long hospitalizations are not coded in the present billing data. However, it can be assumed that these patients also have at least one contact per year with other psychiatric/general healthcare facilities and thus were not lost in our dataset.

Outlook and implications for care

Medical comorbidity and mortality in the mentally ill are increased by an accumulation of health risks caused, for instance, by socioeconomic problems (e.g., unemployment, poverty, social isolation, imprisonment, homelessness) and associated lifestyle factors (e.g., smoking, alcohol/drug use, poor nutrition, obesity, physical inactivity, unprotected sex, psychological trauma). At the same time, people with chronic mental disorders are on the margins of normal medical care: they use health services only to a limited extent, and there are indications of poor compliance by this group of patients (3, 40).

Focusing on mental health problems often prevents care providers from dealing constructively with the medical illness. Furthermore, for various reasons the principles of inclusion and equity are not guaranteed for this patient group in the medical sector (28).

Other factors related to the communication between doctor and patient may also be relevant. Physicians frequently attribute a patient’s symptoms to his or her mental disorder when they are actually related to a general medical condition. Alternatively, physicians may ignore physical health in the presence of prominent psychiatric symptoms (‘diagnostic overshadowing’) (29, e4). Here, models of collaborative care show promising effects (30–32). Many risk factors for “natural causes of death” (e.g., obesity) can be influenced (6, 33–35, e5), which emphasizes the need for further investigation of interventions to reduce mortality in SMI. In this context, effective treatment strategies for patients with comorbid substance use disorders might be crucial, as increased mortality is likely to be caused to a considerable extent by related physical illness (4).

Furthermore, although psychotropic drugs significantly reduce mortality overall, they can have adverse effects that promote the occurrence of medical comorbidities (36, 37). Examples are (38, e2):

Thus, the pharmacological management of medical illness has to be specifically tailored to SMI patients.

In conclusion, the need for health-promoting interventions is beyond question and should be reflected in all treatment guidelines regarding SMI (39).

The work of Frank Jacobi on the present study was supported by the German Association for Psychiatry, Psychotherapy and Psychosomatics (DGPPN).

eFigure
Age-dependent mortality in patients with SMI and in patients without the specific SMI, together with the relative risk (SMI vs. no SMI) over the whole adult life span
Enlarge All figures

eTable 3
Estimated loss of life years by age in SMI patients compared with the total population (administrative data of all statutory health insured adults in Germany, age = 18 years*1, 2013 to 2014)
Enlarge All figures
Mortality and Medical Comorbidity in the Severely Mentally... 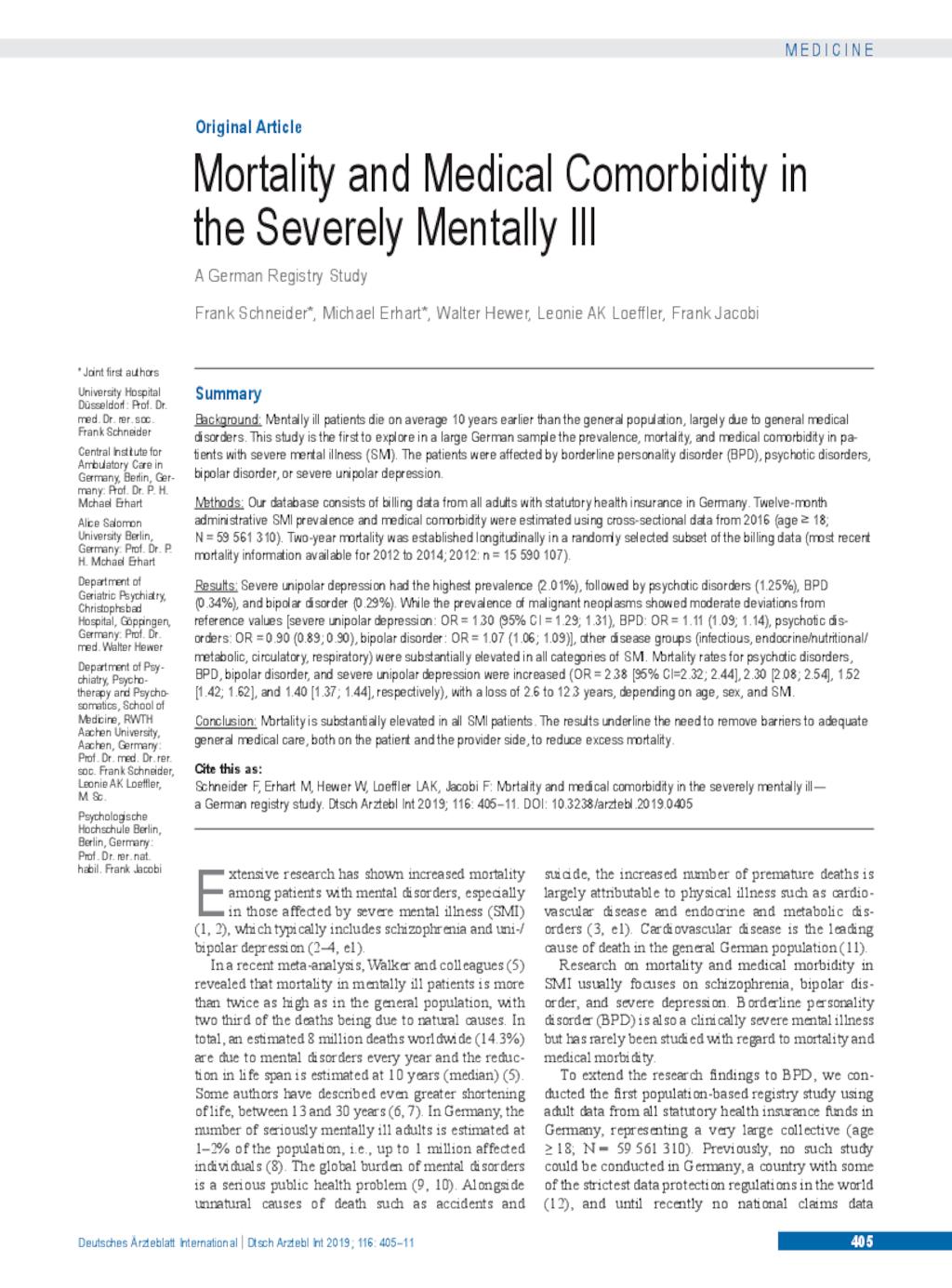