Skewed Recommendations Due to Conflicts of Interest

To compare NOAC with low molecular weight heparin (LMWH) in cancer-associated venous thromboembolism (VTE), a randomized, controlled trial has been published for edoxaban as well as for rivaroxaban, including the methodological weaknesses. For instance, neither trial was blinded, and efficacy was evaluated by including VTE, which was evident solely through imaging as it has no clinical symptoms (1, 2). Even these VTEs were significantly reduced only in one study (1), in contrast to the significant increase of major bleeding (2) as well as clinically relevant non-major bleeding (1, 2). The benefit-to-harm ratio of NOAC in cancer-associated VTE is thus at best unclear.

Nonetheless, the authors present NOAC as an alternative treatment option (3). They have numerous conflicts of interest through financial relationships with NOAC manufacturers. According to the Acknowledgments, two other people played a “significant role” in the article who also receive funds from all NOAC manufacturers.

Several statements of the recommendations are distorted in favor of the pharmaceutical entrepreneurs: for instance, the authors do not mention in the conclusion the increased risk of bleeding with NOAC. When presenting a meta-analysis, they omit in a key statement that the reduction in VTE recurrence under NOAC is only a numerical trend, and that only the increased risk of major bleeding is statistically significant. Such a “spin” of the conclusions, in favor of the sponsor, has also been shown in pharmaceutically funded clinical trials (4).

In the interest of cancer patients, reliable data that demonstrate the superiority of NOAC over LMWH and as an oral alternative to vitamin K antagonists would be welcome. The current study situation is not sufficient for this. Especially for clinical situations with insufficient evidence from trials, recommendations should be made by authors who are free from conflicts of interest through financial ties with pharmaceutical companies.

Conflict of interest statement
Dr. Schott is a member of MEZIS (Mein Essen zahl ich selbst, I pay for my own lunch).

Dr. Schurig is on the board of MEZIS and has received reimbursement for conference participation fees as well as travel and accommodation expenses from MEZIS.

Ms. Dannenberg is on the board of MEZIS.

Dr. Wille is a member of the Drug Commission of the German Medical Association and member of the editorial board of the arznei-telegramm 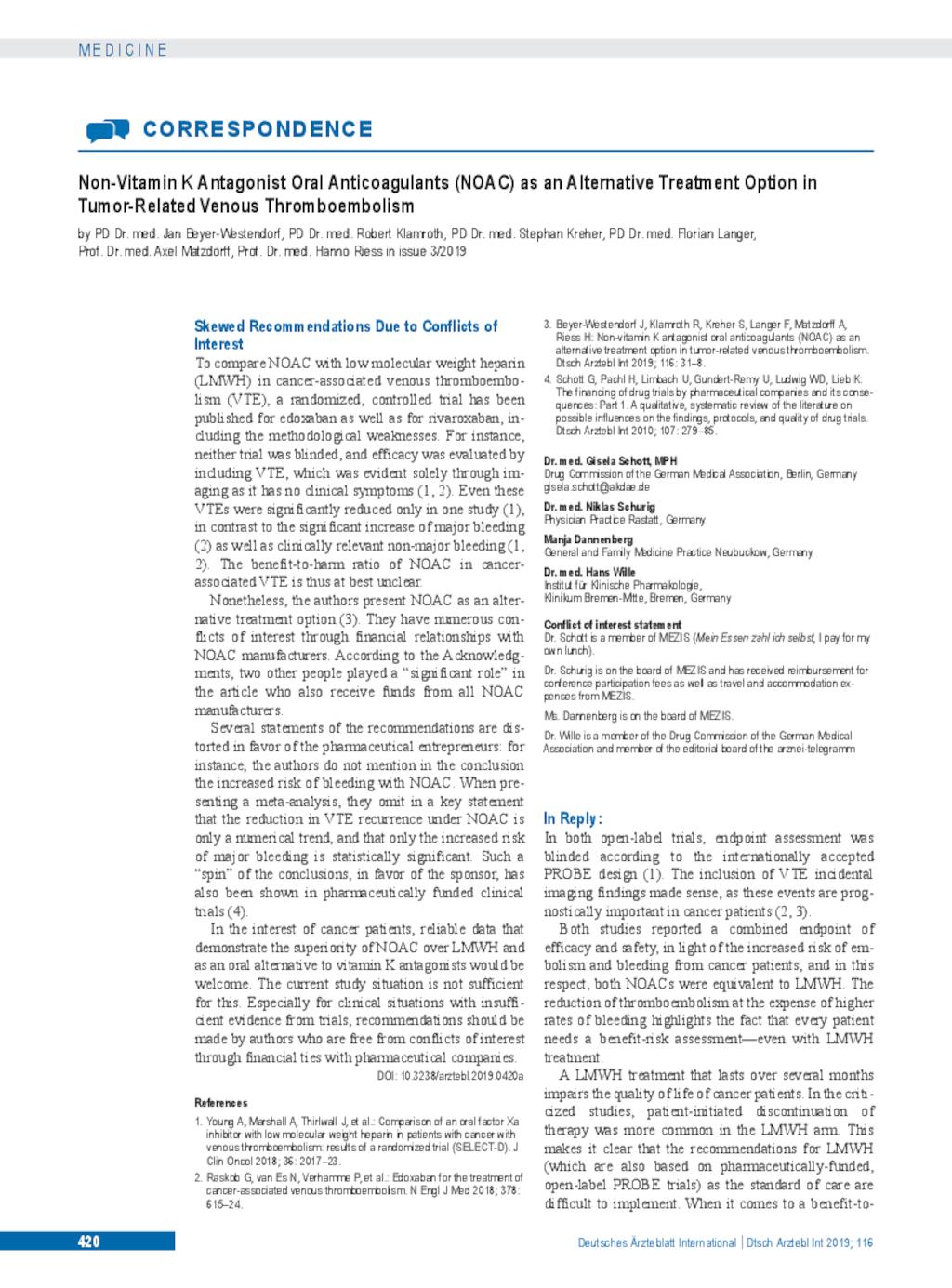