Background: The influenza vaccination rate among older and chronically ill patients in Germany has declined in the past decade in spite of vaccination campaigns.

Conclusion: Fewer than half of all patients with chronic renal failure in Germany are vaccinated against influenza. The vaccination rate was found to be increased only after an appeal for vaccination that was sent directly to the patients. A letter sent to the treating physicians had no positive effect at all.

In the winter of 2017/2018, there were 324 416 cases of laboratory-confirmed influenza infection among residents of Germany (1). Around 20% of these persons—principally the chronically ill and those over 60 years of age—required inpatient treatment (1). These figures underline the importance of vaccinating risk groups against seasonal influenza each year, as recommended by the German Standing Vaccination Committee and numerous professional societies (2–4). The value of this recommendation was shown by the results of a recently published benefit analysis in the USA: the authors concluded that vaccination against influenza avoided more than 100 000 admissions to hospital and circa 8000 deaths in the influenza season 2017/2018 (5).

This negative trend is worrying, particularly in light of the numerous campaigns to increase public awareness of the risk and acceptance of vaccination in recent years. These campaigns focused predominantly on direct persuasion of high-risk patients as to the importance of vaccination. Measures were also taken to encourage primary care physicians to recommend vaccination (10).

These figures clearly illustrate the urgency of effective preventive measures to avoid future epidemics of influenza. In the study presented here, we explored potential strategies specifically for application in patients with chronic renal disease, a group for whom vaccination against influenza is clearly indicated because of the particularly high risk associated with their pronounced multimorbidity (3, 11). After initial analysis of the current vaccination rates on the basis of billing data, we posed the following questions in three independent studies:

1.  Does a recommendation in writing directly from physician to patient have a positive effect on the vaccination rate in patients with chronic renal disease?

2.  Can a written appeal from a regional ASHIP persuade office-based nephrologists to increase their rate of vaccination of chronically ill patients?

3.  Does a direct appeal from a health insurance fund to its members lead to an increase in the vaccination rate among those with chronic renal disease?

First, the billing data of three regional ASHIPs (North Rhine, Schleswig-Holstein, and Thuringia) were analyzed to ascertain the influenza vaccination rates among patients with chronic renal disease. To this end, data from about 12 million statutory health insurees were analyzed.

To answer the questions described above, we then carried out three separate studies:

1.  In a patient-centered randomized controlled intervention study, all patients who had undergone renal transplantation at the Kiel campus of the University Hospital of Schleswig-Holstein (UKSH) up to spring 2016 (n = 460) were randomized into two groups. Following determination of the patients’ vaccination status and attitude to vaccination against influenza in an initial survey, we conducted a second survey to analyze the effect of an appeal from a physician on the vaccination rate and the patients’ attitudes. The appeal came from physicians working in the renal transplantation clinic of the UKSH.

2.  In a physician-centered randomized controlled intervention study, the office-based nephrologists of the North Rhine ASHIP (n = 141) were randomized into two groups. The intervention group were called upon by the ASHIP to recommend vaccination, and the effect was ascertained by evaluating the vaccination billing data for the following year.

3.  In an insuree-centered prospective intervention study, the IKK Südwest health insurance fund sent a vaccination appeal directly to those of their members with chronic renal disease (n = 617). The effect of the intervention was established by analyzing the numbers of vaccinations billed.

Figures 1–3 are flow charts of the three intervention studies. The methods used are described in detail in the eMethods.

During the observation period the influenza vaccination rate for patients with chronic mpairment of renal function ranged from a minimum of 41.1% to a maximum of 46.9%. The vaccination rate for renal transplantation patients varied between 31.7% and 33.7%, that for dialysis patients between 42.7% and 44.7%. As well as these fluctuations over time, there were distinct differences among the ASHIP regions (Table, eTable 1). The groups differed considerably in number of physician–patient contacts. In Schleswig-Holstein, for example, the average of contacts with the patient’s primary care physician or nephrologist was 12.6 for those with chronically impaired renal function, 12.1 for renal transplantation patients, and 35.5 for patients dependent on dialysis. In 79.5% of patients with chronically impaired renal function, influenza vaccination was additionally indicated on grounds of age (>60 years). This also applied to 43.1% of patients who had undergone renal transplantation and to 66.4% of dialysis patients (eTable 2).

Findings of the patient-centered intervention study

Findings of the physician-centered intervention study

Findings of the insuree-centered intervention study

With regard to the secondary endpoint of the study, the intervention had no positive effect on the patients’ assessment of the risk of adverse effects or the severity of influenza as a disease. The increase in the vaccination rate of the intervention group was therefore not due to any modification of the patients’ attitudes. This is a striking finding, because previous studies have presented convincing data to show that insufficiently or inaccurately informed patients have often not been vaccinated (9). Therefore many campaigns—like ours—are informative in nature. Our results show, however, that it is obviously not necessary to change patients’ attitudes in order to increase the vaccination rate. It seems that thinking about vaccination, or just being reminded about it, is more important for the patients.

In the second approach we explored whether an appeal in writing from the regional ASHIP can influence the vaccination behavior of office-based physicians and thus indirectly help to increase the vaccination rate. This intervention showed no positive effect on the patients’ vaccination rate. Since consistently correct coding and billing of the vaccinations given can be expected on financial grounds, this is unlikely to be a false-negative result. It is more likely that the information provided in our study was not conveyed with enough urgency to attract attention in daily practice, or that the appeal was not followed because of hitherto unknown barriers to implementation.

One of the most important vaccination campaigns of recent years in Germany is the “Let’s Beat Flu to It” (“Wir kommen der Grippe zuvor”) campaign, jointly run by the Federal Centre for Health Education and the Robert Koch Institute since 2006 (10). Repeatedly, more than 50 000 primary care physicians have been sent letters urging them to vaccinate their patients against influenza. The effect has not yet been scientifically evaluated; however, our findings in the study presented here suggest that such a campaign does not result in an increased vaccination rate (10, 15). On the basis of our data it would seem appropriate to question the utility of this kind of approach.

In the third approach we tested whether a vaccination reminder from a health insurance fund has an effect comparable to a reminder from a physician. We found that this intervention did indeed significantly increase the vaccination rate of patients with chronic renal disease, but not to the same extent as our patient-centered intervention. Overall, 32 letters had to be sent to achieve one additional vaccination against influenza. This result is in the same order of magnitude as the effect of a centralized reminder system recently tested in Colorado, USA (16). In that study the intervention raised the rate of vaccination against influenza by 3.4% (NNT: 30). Several studies have indicated that influenza vaccination is a cost-effective prophylactic measure, particularly in high-risk patients (17–19). It is estimated that US$ 73 (circa € 65) in direct health-related costs can be saved by each vaccination (20). To what extent these figures are transferable to the German situation is unclear, but in view of the overall cost of an influenza vaccination (circa € 22) the expense generated by our intervention (circa € 25 for printing and postage to achieve one additional vaccination) does not seem excessively high.

Our study suggests that physicians could raise vaccination rates among their patients by adding written prompts to direct verbal reminders. To achieve a nationwide increase in vaccination rates, however, it would seem more pragmatic to establish vaccination reminder systems at the level of the health insurance funds. Such an approach has several potential advantages: An insurance fund covers far more patients than a physician’s office, facilitating widespread implementation. Moreover, redundant establishment of reminder systems would be ruled out. Furthermore, the principle could be extended, as and when required, to other indications, e.g., to combat low rates of vaccination against measles or HPV (21, 22). In the form tested here, the insurance fund approach offers scope for improvement: The wording and timing of the communications could be better adapted to the requirements of the target group, and insurees not vaccinated in the previous year could be prioritized. On grounds of data protection and costs, a key role could be played by digital reminder systems in which the insurees control the data. Any such system should be contained in the electronic medical record.

This approach would, for the first time, largely individualize the dissemination of information about vaccination. Rather than sending the same standard communications to everyone, information material could be tailored to the needs of the respective target group.

Acknowledgments
We are particularly grateful to Sarah Jacobskötter for her painstaking editing of the German manuscript. We also thank Florian Ernst (IKK Südwest) and Dr. Heidrun Thaiss (Federal Centre for Health Education) for their valuable support in carrying out this research.

Data sharing
All of the data on participants in the patient-centered intervention study can be provided to interested researchers in anonymized form. The primary data from the physician-centered and insuree-centered intervention studies cannot be made available. All applicants should enclose a methodologically sound proposal for analysis of the data concerned and guarantee that the data will not be used for any other purpose. Applications should be sent to Dr. med. Kevin Schulte, Medizinische Klinik IV, Rosalind-Franklin-Str. 12, 24105 Kiel, Germany. The data will be available from 3 months to 5 years after publication of this article. 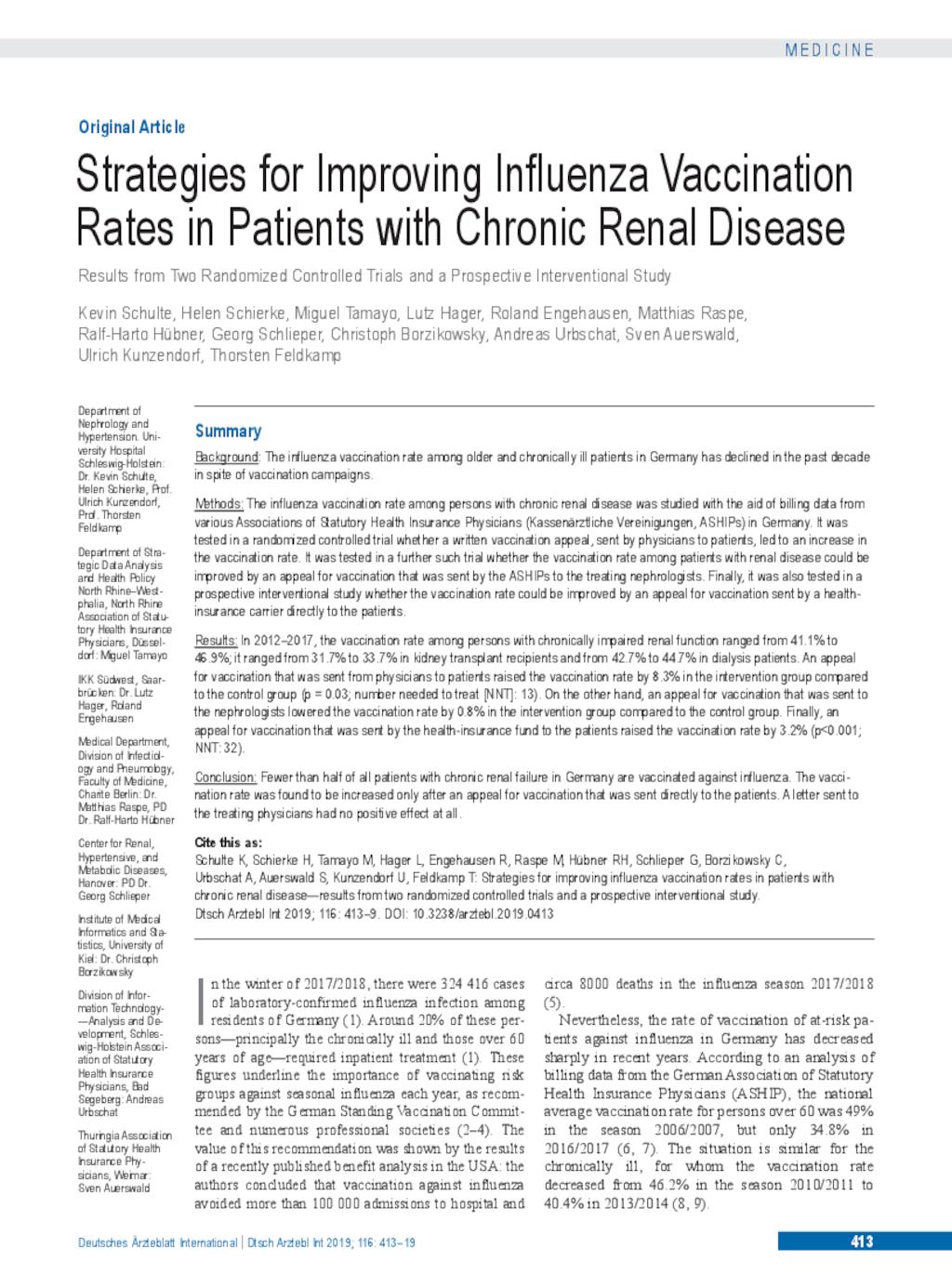