Addiction to Legal Drugs and Medicines in Germany

Dtsch Arztebl Int 2019; 116: 575-6. DOI: 10.3238/arztebl.2019.0575
Editorial to accompany the articles: “Trends in Substance Use and Related Disorders—Analysis of the Epidemiological Survey of Substance Abuse 1995 to 2018” and “The Use of Alcohol, Tobacco, Illegal Drugs and Medicines–An Estimate of Consumption and Substance-Related Disorders in Germany” in this issue of Deutsches Ärzteblatt International

Addictive disorders are one of the most important risk factors worldwide for morbidity and mortality (1). In industrialized countries, almost every second act of violent behavior is committed under the influence of alcohol (2). The Deutsches Ärzteblatt has now published the current figures on drug use and the prevalence of the harmful use of and dependence on legal and illegal drugs (3, 4). The figures show that the legally available drugs alcohol and tobacco remain those most frequently consumed in a harmful or dependent manner. Medication dependence is also a common problem (1), and one that can occur even with non-opioid pain killers (3).

Investigations into the risk factors are lacking

The German Epidemiological Survey of Substance Abuse (Epidemiologisches Suchtsurvey) 2018 provides a detailed analysis of current drug use and its effects (3). It surveyed 9000 individuals aged 18–64 years and recorded their substance use in the preceding 12 months, as well as the presence of harmful use or dependence according to DSM-IV (5). Almost 9% of all respondents were tobacco-dependent, followed by analgesic-dependent (3.2%) and alcohol-dependent individuals (3.1%). At 7.6%, harmful use was most commonly seen with analgesics, even more so than with alcohol (2.8%). These figures highlight the considerable significance of medication dependence, particularly on analgesics. This problem is primarily due to non-opiate analgesics (3). For example, in the case of chronic headaches, symptoms of dependence on paracetamol, caffeine, and ergotamine may emerge (6). Barely any investigations have been conducted as yet into the risk factors for the development of medication dependence of this kind and the related neurobiological mechanisms (6, 7). This gap in research urgently needs to be closed, particularly since, in such cases, medications are also prescribed by physicians.

Of the substances that cannot be bought legally, cannabis was the most commonly used (by 7.1% of all respondents), followed by cocaine/crack cocaine and ecstasy (1.1% each). What appears to be particularly interesting here is the trend over time, since the question arises of a possible increase in cannabis use due to its greater social acceptance. In order to answer this question, nine surveys from the Epidemiological Survey of Substance Abuse from the period 1995–2018 were analyzed (4). This showed an increase in the use of analgesics, as well as cannabis and other drugs not legally available in Germany, whereas the use of tobacco, alcohol, and sedatives/hypnotics declined. While the decline in alcohol and tobacco use was more pronounced among women compared to men, the rise in cannabis consumption and the use of other illegal drugs was also greater among women. However, no increase in harmful use of or dependence on cannabis was identified (4).

Episodic binge drinking on the rise among women

With regard to the drug tobacco, the number of dependence disorders declined by 2–3% in men and women. However, alcohol remains the most commonly consumed drug in Germany. One must also emphasize that even consuming as little as a few cigarettes a day significantly increases the risk for cerebrovascular disease (8). The rise in dependence on alcohol, analgesics, hypnotics, and sedatives seen in 2012 was on the decline in 2018. However, episodic binge drinking rose among women. This is especially concerning, since in particular young people with good acute tolerance to large quantities of alcohol develop a false sense of security and tend toward greater alcohol consumption in the future (9). Indeed, the “ability to hold one’s drink” is one of the best documented and genetically linked risk factors for the development of alcohol dependence: affected individuals apparently lack a warning signal when they have drunk too much, and acute good “tolerance” of alcohol consumption does not protect against its long-term sequelae (2, 9).

For research purposes, more studies are needed on the development and persistence of medication dependence. To date, long-term support for addiction research in Germany has been provided by the German Federal Ministry of Education and Research and the German Research Foundation in the field of substance-related addiction disorders. The research networks that receive funding in this context continue to address the central problem of dependence on legal drugs. However, what is largely lacking—apart from isolated studies (6, 7)—are systematic investigations into the effect of analgesics, as well as the prevention, diagnosis, and treatment of the associated addictive disorders. The authors of the recent articles in the Deutsches Ärzteblatt (3, 4) quite rightly call for greater efforts in terms of the prevention and early detection of addictive disorders. Since a reduction in substance use also reduces the related health risks (10), society is called upon to discuss appropriate measures, including a ban on advertising.

With the support of the German Research Foundation (Project FOR 1617, Project SFB/TRR 265) and the German Federal Ministry of Education and Research (Joint Project “AERIAL” 01EE1406A).

Conflict of interest statement
The authors state that they have no conflicts of interest.

Translated from the original German by Christine T. Rye. 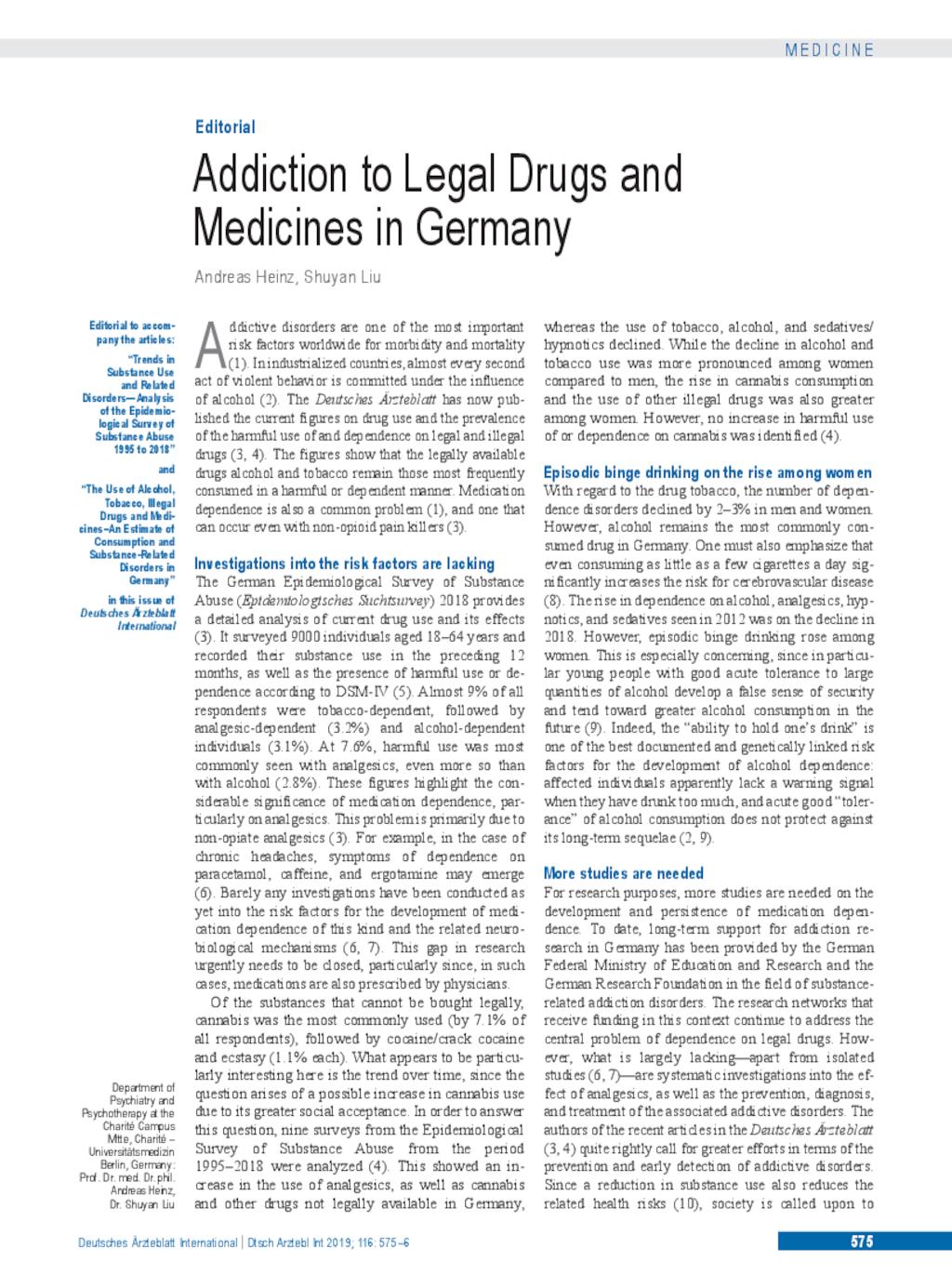