Methods: A total of 484 cancer survivors of working age who were candidates for rehabilitation were recruited and assigned at random to either the intervention group (IG; work-related medical rehabilitation) or the control group (CG). The primary endpoint was self-assessed function in a role one year after the end of rehabilitation, as evaluated with the health-related quality of life questionnaire of the European Organisation for Research and Treatment of Cancer (EORTC QLQ-C30). Further endpoints included symptom and function scales, subjective ability to work, coping with illness, and return to work. Neither the medical personnel nor the subjects were blinded.

Results: One year after the end of rehabilitation, data from 379 subjects who participated in the last follow-up survey were evaluated. The intervention and control groups did not differ significantly either in the primary endpoint of role function (IG = 60.8 vs. CG = 57.6 out of a maximum of 100 points; p = 0.204) or in any of the secondary endpoints. A last observation carried forward analysis yielded comparable results. At 12 months, 28.5% of the subjects in the IG and 25.3% of those in the CG were still unable to work.

With an estimated 18.1 million incident cases in 2018, cancer is one of the leading causes or morbidity worldwide (1). Early detection and improved treatment options have resulted in a rise in the number of survivors (2). Some 1.3 million men and 1.3 million women currently living in Germany have received a cancer diagnosis in the past 10 years (3). Almost half of the survivors are younger than 65 and therefore still working. Work is a central part of life for most of us, not only because it provides an income and material security, but also because it enables contacts and scope for further development and self-fulfillment. For persons with cancer, the return to work is often a sign that their lives are returning to normality. It is therefore perceived as an important step in coping after this life-threatening event (4, 5). Eight out of 10 cancer patients successfully re-enter employment within the first 2 years after the diagnosis (6). In spite of this, however, cancer survivors have a higher risk for unemployment than healthy controls, and more of them report restrictions to their work participation (7, 8). Furthermore, having survived childhood cancer is associated with a greater probability of unemployment in adulthood (9).

The study was approved by the ethics committee of the University of Lübeck (no. 14–289) and the data protection officer of the DRV. The study was registered in the German Clinical Trials Registry (no. DRKS00007770). A detailed explanation of the method and intervention can be found in the eMethods section and the study protocol (17).

We included cancer patients aged 18 to 60 years from all oncological indication groups (ICD-10 codes C00–D48: Neoplasms), who had successfully completed their initial cancer treatment and for whom at least one scale of the screening instrument “Beruf und Arbeit” (Work and Occupation; SIBAR) indicated a need for work-related medical rehabilitation (SIBAR I: at least 8 points; SIBAR II: very stressful; SIBAR III: very helpful) (21). All participants had a score of ≥ 70% on the Karnofsky Performance Status Scale (22) and a preliminary positive social medical prognosis of at least 3 h/day for the ensuing 6 months.

The primary outcome measure was self-assessed role functioning a year after the rehabilitation had been completed. Role functioning was captured by using the health-related quality of life questionnaire of the European Organisation for Research and Treatment of Cancer (EORTC QLQ-C30) (24). The role functioning scale employs two items to capture the degree to which affected persons feel restricted in their work and leisure activities. A minimum difference of 10 points between CG and IG was interpreted as clinically relevant (25).

The secondary outcome measures were the scales of the EORTC QLQ-C30 for physical, emotional, and cognitive functioning, general health, and pain (24), as well as the fatigue module EORTC QLQ-FA13, which records physical, emotional, and cognitive fatigue as well as problems in daily life and social consequences of fatigue (26). Furthermore, data were collected on how participants were coping with their illness (Freiburg Questionnaire of Coping with Illness [FKV] [27]), their subjective ability to work (Work Ability Score [28]), and the concrete point in time when participants returned to work. All the described outcome measures were documented by means of participants’ self-reports.

We used mixed-effects models to calculate treatment effects. We estimated the effects by controlling the relevant value in the initial survey and the rehabilitation centers, which were modeled as fixed effects. In order to describe differences between groups, we calculated standardized mean differences (SMD) (29) (small effect: SMD ≥ 0.2; medium effect: SMD ≥ 0.5; large effect: SMD ≥ 0.8 [30]). To compare reintegration into work, we determined hazard ratios (HR). Furthermore, we calculated average adjusted predictions that reflected the predicted probability for the occurrence of an event (return to work) within 1 year (31). The time until return to work was depicted using Kaplan–Meier curves (32). To describe the heterogeneity that was associated with the clusters, we determined the intracluster correlation (ICC) for each outcome measure (33, 34). All participants were analyzed on an intention to treat basis (25). We analyzed the data for the participants of the final follow-up (17, 36) and conducted an analysis, for which the missing values were substituted by the value at the last available observation point (last observation carried forward, LOCF) (17, 36). Differences between groups were considered significant if the probability of a two-sided error was less than 5%. We used STATA 15 for our calculations.

We recruited a total of 484 rehabilitants and randomized 165 groups (80 groups in the IG) (Figure 1). The average cluster size in both intervention arms was three persons per week of arrival. One year after completing the rehabilitation program, 379 rehabilitants participated in the follow-up survey (78.3%) (197 persons in the IG). These persons were divided into 151 groups (75 groups in the IG). Table 1 shows the sample statistics for both treatment groups at the initial survey. The characteristics of the two groups showed no significant differences. The distributions of the scores were graphically tested and found to be symmetrical (Figure 1, Table 1).

In total, the difference of the therapeutic dose between intervention and control arms amounted to 16 h (IG: 79 h; CG: 63 h). The overall duration of the rehabilitation programs in treatment days was comparable in both groups (IG: 24.7 days; CG: 23.8 days) p=0.128). The rates of rehabilitants who underwent the recommended minimum dose of work-related diagnostic evaluation (at least 60 min), intensified social counseling (at least 90 min), work-related psychosocial groups (at least 240 min), and work-related functional capacity training (at least 360 min) were 99.0%, 94.4%, 87.3%, and 90.4%. In the mean, the agreed minimum doses of the work-related therapies were delivered in all centers.

Role functioning (our primary outcome measure) after 1 year was rated around 4 points more favorably by the intervention group. The difference is clinically not relevant and does not attain significance. The secondary outcome measures also showed no clinically relevant advantages for the IG (Tables 2, 3, eTable 2). The differences were similar in the LOCF analysis (Tables 2, 3).

Time to return to work

With regard to the effectiveness of multiprofessional interventions in inpatient oncological rehabilitation, a systematic review based on two studies did not find any difference between IG and CG with regard to health-related quality of life after 1 year (5). The effects of multidisciplinary interventions on patients’ return to work reported by Boer et al. were not confirmed by our study. The return rates in our study were similar to those in the CG in that review article (5), but it should be borne in mind that the target group of our study was greatly restricted by the defined inclusion criteria. At the start of rehabilitation, the initial scores on the function scales of the EORTC QLQ-C30 were some 35 to 50 points below those of a healthy standard population of the same age (37, 38) and self-rated work ability was extremely low (39).

Our study results reveal a fundamental challenge in oncological rehabilitation. A successful return to work mostly takes place months after the inpatient rehabilitation program was completed, and one quarter of rehabilitants had still not returned to work 1 year later. Persons who had not returned to work after a year were found to have lower quality of life and lower self-rated work ability, as well as greater symptoms of fatigue, at all four measurement points than persons who were back at work (data not shown). The early identification of persons with an unfavorable prognosis for work participation seems important (4), but the currently available programs and rehabilitation strategies—and this includes the work-related medical rehabilitation that we implemented—do not appear sufficient to enable the members of this group to return to work. Useful refinements of rehabilitation services for such persons might include provision of further support, e.g., by a case manager—particularly because the return to work will usually take place a number of months after the end of the rehabilitation program. Such ongoing support should enable the structured planning of the return to work and, wherever possible, embrace all those involved in the reintegration process, including employers and occupational physicians (5). It is also conceivable that the modules described and studied by us will achieve the desired additional effect only by virtue of a second phase of rehabilitation.

Our study results are subject to certain methodological limitations. First, the participants and physicians were not blinded. We thus cannot exclude the possibility that the more positive short-term results for patients in the IG were a result of their awareness that they were participating in a new and special program. Furthermore, transfer effects owing to joint activities during inpatient rehabilitation cannot be ruled out. Second, the work-related elements of the program comprised an additional service. The two treatment arms differed not only in content but also in intensity. The differences observed in the short term, up to 3 months after the end of rehabilitation, may also be explained by a non-specific increase in the therapeutic dose. Third, the work environment (job description and requirements, working hours) was not documented. Heterogeneity of the work environment could be a potential moderator, but this was not considered in the subgroup analyses. The same is the case for disease stage and comorbidities. Fourth, no organic and laboratory medical health parameters were captured; consequently, the effects of the rehabilitation measures on these parameters are not known.

Besides these limitations, however, we would also like to emphasize the strengths of our study. First, the chosen study design reduced the risk of biased estimated effects and ensured that the two treatment groups were structurally identical. Second, the decision in favor of cluster-randomized allocation to the IG or CG had the advantage that possible transfer effects, which are impossible to avoid in the inpatient rehabilitation setting because of common services and activities were reduced by the joint randomization of patients admitted at the same time. Third, it was possible to present the treatment dose and adherence to treatment in a transparent fashion (19).

In conclusion, implementation of a work-related medical rehabilitation program in the oncology setting—such as we did in four centers—probably does not improve cancer patients’ chances of job reintegration. Future research projects should investigate the extent to which patients who will not manage to reintegrate into the workplace can be identified early in the rehabilitation process. Furthermore, it should be determined to what extent the concrete individual workplace and occupation are actually the cause of the delayed return to work and whether it is possible that a second rehabilitation period might be indicated to support reintegration into the workplace.

We thank the German Pension Insurance for financial funding and the participating rehabilitation centers Klinik Bavaria in Freyung, Paracelsus-Klinik am See in Bad Gandersheim, MediClin Rose Klinik in Horn-Bad Meinberg, and AMEOS Reha Klinikum in Ratzeburg for their support and commitment to conducting the study.

Conflict of interest statement
Dr. Zomorodbakhsch, Dr. Schmielau, Dr. Biester, Dr. Krüger, and Dr. Presl hold positions as senior physicians or in the management in the participating rehabilitation centers. The remaining authors declare that no conflict of interest exists.

The authors declare that the primary data cannot be shared as the data protection concept of the study and the patient consent forms do not cover this. 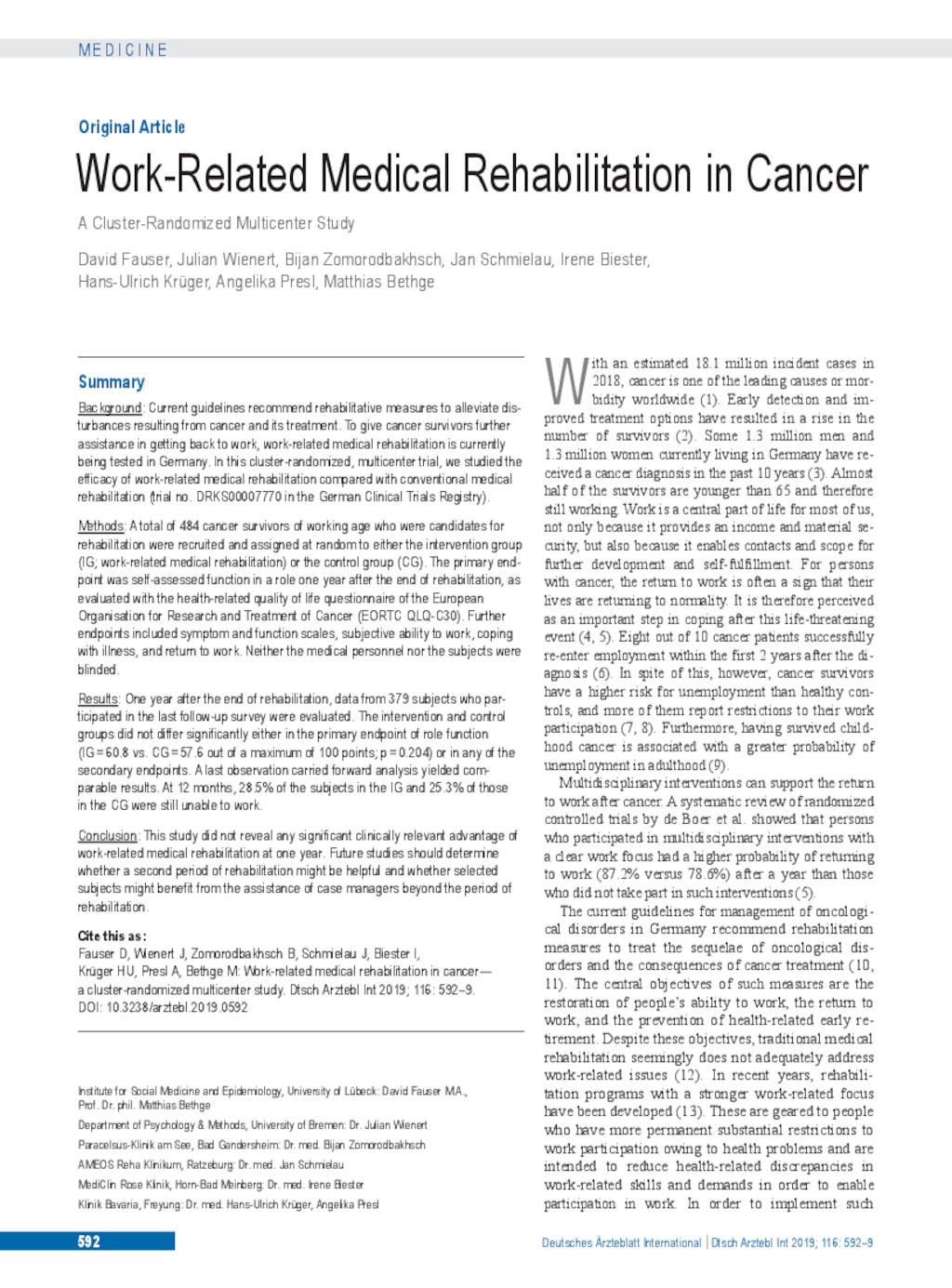