DÄ internationalArchive39/2019Hospitalization and Intensive Therapy at the End of Life

Hospitalization and Intensive Therapy at the End of Life

Background: Germany has more intensive care unit (ICU) beds per capita than the USA, but the utilization of these resources at the end of life is unknown.

Conclusion: Use of intensive care services during terminal hospitalizations increased across all age groups, particularly the elderly. The increased need for end-of-life care in the ICU calls for improvements in educational, policy, and reimbursement strategies. It is unclear whether ICU care was appropriate and compliant with patient preferences.

Healthcare systems in high-income countries are challenged by a growing population of elderly patients with increasing comorbidities and rising demand for technologically advanced care. These trends raise questions about the appropriate use of intensive care services at the end of life.

When faced with a serious illness, most people prefer to die at home (1). In contrast, intensive therapy signifies some of the most aggressive aspects of care, which can potentially worsen the experience of death for patients and their families and may increase burnout and distress among ICU personnel (2, 3). On the other hand, intensive care can stabilize an acute life-threatening condition and some intensive palliative treatments may be better performed in an ICU when patients are in crisis. Importantly, providing high-quality end-of-life care requires skills in decision-making and communication and the collaboration of a well-functioning interdisciplinary team (2).

Details of study methodology can be found in the eMethods. In short, we used the German diagnosis-related groups (DRG) statistics for the analysis of hospitalizations with and without intensive care. We used the population and deaths statistics of the German Federal Statistical Office and data on hospital/ICU beds from the Federal Health Monitoring Service. We identified patients of all ages between 2007 and 2015 and excluded cases with unknown age and sex (Figure 1). We opted for a conservative approach to identify ICU treatment by codes for operations and procedures (OPS codes 8–980, 8–98c, 8–98d, 8–98f, = intensive care complex treatment). Use of intensive care services during terminal hospitalizations was determined by the number of patients who died in hospital and received ICU care at any time during their hospital stay. We calculated annual population-based incidences and standardized these to the German population structure according to the age and sex distribution as of 31 December 2007 based on nationwide population data of the Federal Statistical Office for 2007–2015.

Trends in hospitalization and intensive care use from 2007–2015

Among hospital patients receiving intensive care, median age increased from 69 [interquartile range, IQR 57–77] to 71 [58–79] years (eTable 2). Hospital length of stay declined from median 14 [8–24] to 13 [7–22] days. The proportion of patients receiving mechanical ventilation increased from 25.0% to 30.5%, and for mechanical ventilation > 4 days from 15.6% to 16.2%. The proportion of patients with multimorbidity (≥ 2 comorbidities) increased from 55.2% to 57.5%. There were increases in congestive heart failure, renal disease, chronic pulmonary disease, and peripheral vascular disease, while myocardial infarction and malignancy decreased (eFigures 1 and 2). The use of palliative care services was very low but increased from 0.1% to 0.7% (eTable 2). Documentation of intensive care cases with increased complexity rose rapidly after the more rigorous OPS code 8–93f was introduced in 2013 to describe cases with increased complexity and higher costs (eFigure 3a).

Figure 3
Development of hospital deaths involving ICU care in Germany from 2007 to 2015. The numbers of deaths are expressed in thousands (k)
Enlarge All figures

eTable 2
Demographics, comorbidities, and resource use for hospital patients with intensive care treatment
Enlarge All figures

Trends in discharge dispositions of survivors

eFigure 4
Hospital deaths per year stratified by age group. The bars represent the years from 2007 to 2015. The numbers of deaths are presented in thousands (k)
Enlarge All figures

These findings raise questions about the potential reasons for the growth in use of intensive care treatment. Population demographics is unlikely to be the major contributor, because age- and sex-standardized incidence rates also increased. Another possible explanation is increasing morbidity and disease severity: ICU patients are getting sicker and older (9), which may account for an increasing demand for intensive care in hospitals (10). Moreover, economic incentives may play a role. In the DRG system, hospitals’ profits increase exponentially with the numbers of days when mechanical ventilation is used and staffing ratios are low (11). This economic incentive may explain why ICU capacity and occupancy rates are increasing steadily in hospitals of all sizes (12), although the total number of hospital beds is going down (13), and may have accelerated the increase in “complex” intensive care cases we observed after introduction of the more rigorous yet better financed OPS codes 8–98f.

In 2012, the number of ICU beds in Germany was 31.8/100 000 (14), more than in the USA and double the European average (15). Importantly, this development goes along with one of the lowest nurse-to-patient ratios in Europe (16). In England, where financial incentives and societal perspectives are different, analysis of hospital discharge data showed that only 5.1% of deaths involved intensive care and there was almost no use of intensive care services in patients aged ≥ 85 years (17).

The question to what extent intensive therapy would be desired by informed patients or contributes to overtreatment—which in turn worsens the burden on the treatment team and increases healthcare costs—cannot be answered based on the administrative data we analyzed. However, our data describe important trends with implications for patients, relatives, health care professionals, and policy makers. Further prospective studies are needed to evaluate the benefits and harm of ICU utilization at the end of life.

Broadening the view to other countries, one sees that in the USA, for example, the use of mechanical ventilation among hospitalized nursing home residents with advanced dementia doubled from 2000 to 2013 without improving survival (8). At the hospital level, an increase in the number of ICU beds over time was associated with increasing use of mechanical ventilation for these patients (8).

In a German single-center survey among relatives of patients with sepsis, 23% stated that the intensity of treatment had not been consistent with the patients’ wishes (23). However, the prevalence of advance directives is only 9–13% in patients who die in the ICU in Germany (24, 25). Although advance directives are rarely specific enough to enable definitive decisions regarding treatment intensity at the end of life (26) and may have little or no impact on the intensity of the therapy provided (25, 27), the low prevalence of advance directives indicates that awareness of the importance of such directives is low in the general population. This may contribute to increasing use of intensive care services during terminal hospitalizations. In the USA, it is assumed that the increasing demand for ICU treatment with stable staffing levels and resources will have negative implications for all ICU patients and will increase demands on ICU treatment providers still further (28).

Taken together, our data show the growing demand for end-of-life care in the ICU and suggest an opportunity to implement and strengthen palliative care in the hospital and particularly in the ICU (2). Given that most critically ill patients have lost decision-making capacity, decisions to change the goal of treatment or not to admit patients with a poor prognosis lie in the hands of physicians and family members. For some patients, palliative treatments may be better performed in an ICU and by trained and experienced ICU clinicians. However, end-of-life care demands interdisciplinary collaboration, decision making, and communication with the family. Acquisition and implementation of the corresponding skills will require additional educational programs, better reimbursement, and increased staffing levels (11).

The strength of this study is its representativeness, based as it is on nationwide administrative data. In addition, we selected a conservative approach to identify use of ICU care. The coding is strictly supervised by government agencies and routinely cross-checked by trained physicians of the medical service of the health insurance companies in Germany (MDK).

This study also has important limitations:

We cannot provide information on severity of critical illness, clinical decision making, or patients’ presumed or actual preferences. Therefore, we cannot assess whether use of intensive care at the end of life was appropriate and compliant with patient preferences. Nevertheless, the fact that end-of-life care in the ICU increases in older patients is important.

We cannot differentiate whether a hospitalized patient died during or after the ICU treatment. Although our approach allows understanding of ICU utilization during terminal hospitalizations, it does not permit identification of the proportion of patients who die in the ICU. We can neither retrace transfers between ICU and ward nor know the underlying medical and ethical decisions.

There may be selection bias in that patients who died within 24 h of admission to the ICU were not included as per OPS coding prerequisites. This may lead to underestimation of hospital deaths after use of intensive care.

Since the patients are anonymized, multiple hospital admissions for individual patients and transfers between hospitals cannot be identified. This is not a limitation for exploring terminal hospitalizations but restricts our ability to examine repeat admissions and transfers.

Finally, coding of healthcare services and comorbidities may contain inaccuracies, be influenced by coding incentives, and change over time. These incentives may have led to increased coding of intensive care services in general with high relevance for monetary reimbursement. Therefore, the interpretation of trends based on the DRG statistics data remains tentative. Further prospective data are needed to better understand the underlying mechanisms of the observed increase in use of ICU services during terminal hospitalizations.

In the context of growing availability of ICU beds in Germany, we found an increase in hospital deaths among patients who received intensive care across all adult age groups, particularly the elderly, from 2007 to 2015. This increase in end-of-life care in the ICU calls for increased efforts to identify and implement patient preferences and develop policy and reimbursement strategies to improve the quality of care for these patients as their life draws to an end.

Acknowledgment
The authors acknowledge Dr. Hannah Wunsch, who provided helpful comments during the writing of the draft.

Funding
This study was supported by the Federal Ministry of Education and Research (BMBF) through the Center for Sepsis Control and Care (CSCC; FKZ: 01EO1002 and 01EO1502) via InfectControl2020 (FKZ: 03ZZ0819B).

Conflict of interest statement
Prof.Reinhart is a partner in InflaRx Jena and a consultant for Adrenomed Henningsdorf Berlin.

Figure 3
Development of hospital deaths involving ICU care in Germany from 2007 to 2015. The numbers of deaths are expressed in thousands (k)
Enlarge All figures

eFigure 4
Hospital deaths per year stratified by age group. The bars represent the years from 2007 to 2015. The numbers of deaths are presented in thousands (k)
Enlarge All figures

eTable 2
Demographics, comorbidities, and resource use for hospital patients with intensive care treatment
Enlarge All figures 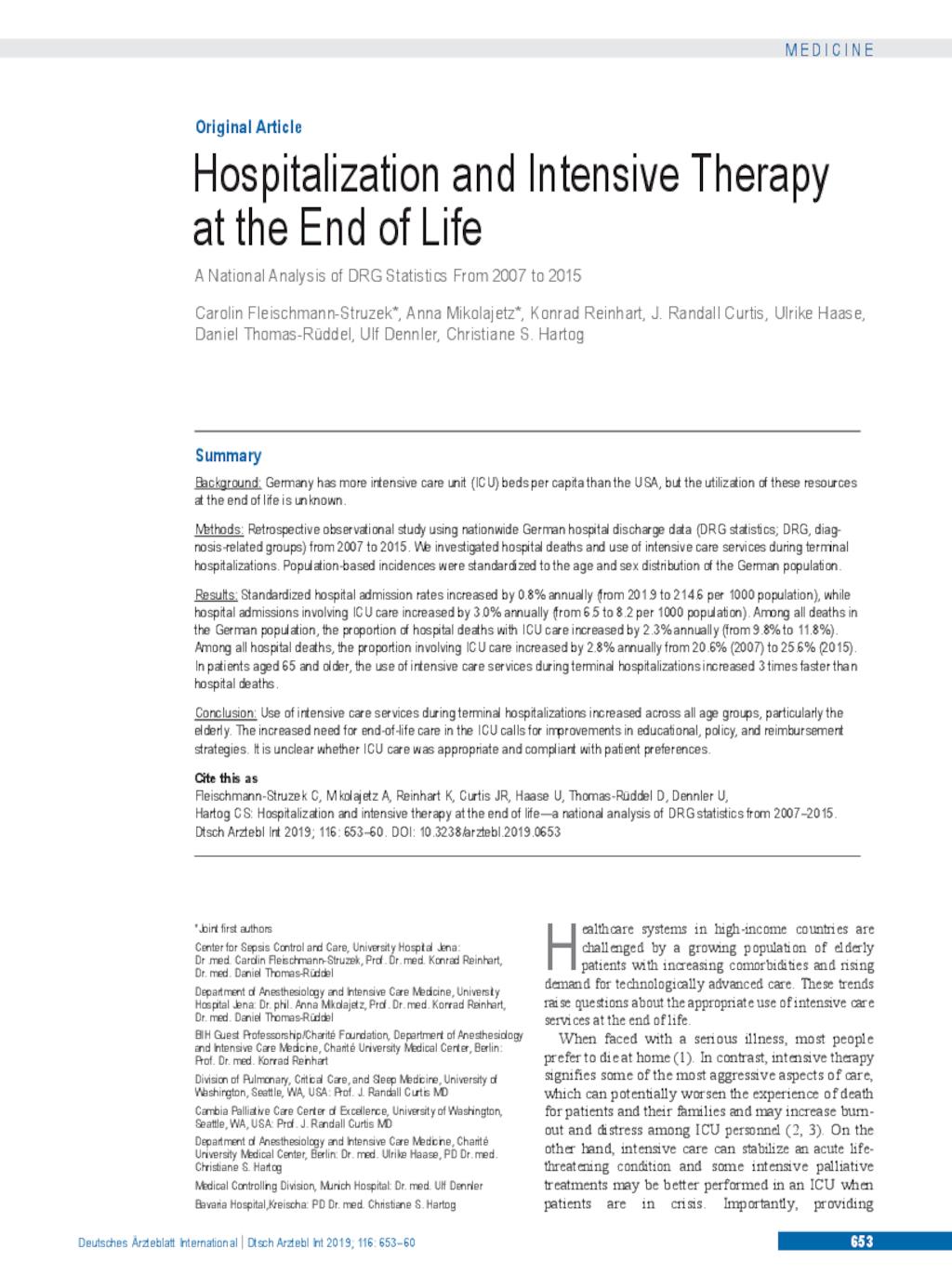