It was by no means the authors’ intention to criticize the Catholic Church or cause it harm, as the correspondence may imply. Rather, our study aimed to factually describe sexual crimes committed by Catholic priests or of which these priests were suspected, and which those in positions of responsibility in the Catholic Church dealt with inadequately and which, in some cases, had been systematically concealed (1). It is these internal events that have still not been uncovered in detail and cleared up that cause massive harm to the creditability of the Catholic Church—and not the publication of study results. Our study discusses in detail study options but also methodological limitations, some of which were imposed on the authors by the Church itself.

Indeed, numerous questions remain unanswered. Our article explicitly mentions the need for further studies. The subject of possible false accusations was also discussed in the article—and it raises concerns in the authors if an assumption is articulated that a payment of 5000 Euros in the context of the process of compensation in acknowledgment of the suffering that was caused to victims of sexual abuse might be a substantial stimulus for false accusations. This process was analyzed in detail in the context of the MHG Study (2). It was found that many victims did not feel they were being taken seriously during the process and experienced the amount of moneys paid as demeaning. A recent review article on the subject of the credibility of victims of sexual abuse emphasizes that the vast majority of accusations reflect the truth (3). A recent study on undiscovered cases of sexual abuse calculated a number of up to 114 000 victims—notably higher prevalence rates of sexual victimization of children at the hands of Catholic clergy (4). On the basis of this finding we can assume that in addition to the very small number of false accusations, there is a much larger number of victims who to date have not even come forward about their experiences.

It is true that similar studies in other institutions have thus far not been undertaken but are urgently required. The Protestant Church is currently planning such a study. However, the Catholic Church commissioned the MHG Study, parts of which are discussed in our article, only after massive public pressure. There is no institution with a similarly high moral high ground as the Catholic Church. For this reason, it is not appropriate to point the finger at other institutions. The authors The authors are in complete agreement with the deliberations of Prof. Briken in the accompanying editorial, that the medical profession should attend to the results of the MHG Study (5).

All authors received study support and reimbursement of travel expenses from the VDD and the German Bishops’ Conference. 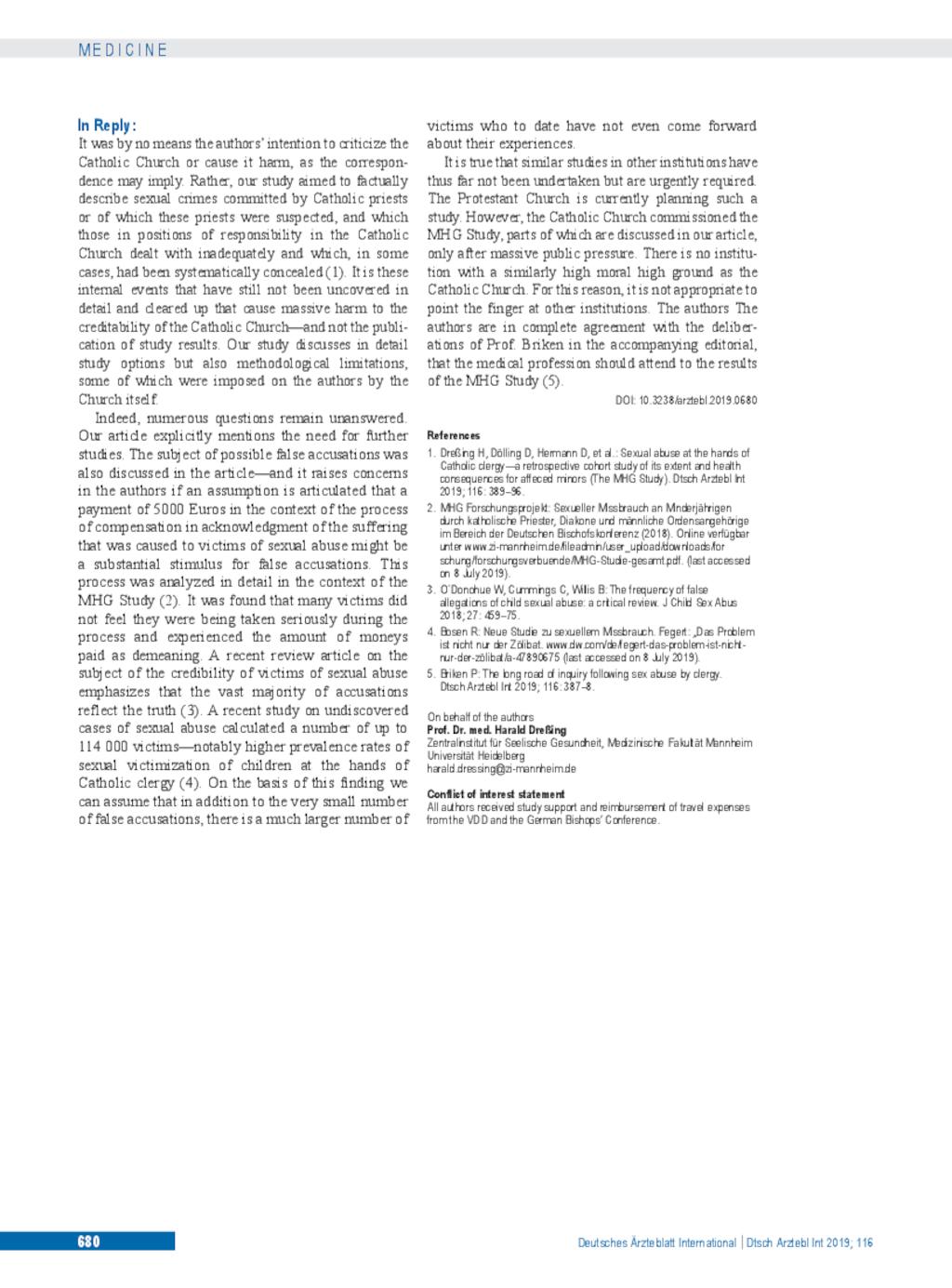