The Frequency and Timing of Recurrent Stroke

Background: Stroke is among the leading causes of death in Germany and one of the main reasons for handicap and disability. The risk factors for stroke include hypertension, metabolic disorders, and diabetes. An estimated 250 000 persons sustain a stroke in Germany each year. German data on the occurrence of stroke, and of recurrent stroke in particular, are still inadequate. The main objective of this study was to determine the frequency and timing of recurrent stroke.

Methods: The analyses were based on routine data of the AOK statutory health insurance fund in the German federal state of Lower Saxony. Inpatient billing and diagnosis data were used to identify initial and recurrent strokes (ICD-10 I60–I64). The derived incidence and prevalence were standardized for age and sex. The risks of recurrence and mortality were estimated with Kaplan–Meier analyses and Cox regressions.

Altogether, the currently available data on stroke rates, especially with regard to recurrent stroke, are unsatisfactory. In the study by van den Bussche et al. (7), 11.2% of the study population had a recurrence within 12 months. In the patient cohort of the Erlangen Stroke Registry, the recurrence rate was 15% over the 2-year follow-up period (9). A recent study in the USA found a recurrence risk of 9.5% within 5 years after transient ischemic attack (TIA) or mild ischemic stroke (10).

The present analysis aimed to determine the rate and the timing of recurrent stroke after an initial stroke event. Further points of interest were analysis of the incidence and prevalence of stroke events and calculation of mortality after incident stroke.

The present study is based on GKV routine health insurance data from the 2.7 million members of the AOK statutory health insurance fund in the German federal state of Lower Saxony. Routine data include various data that are collected for billing purposes (11). Routine data provide an opportunity to undertake a multitude of different analyses in the context of health services research (12–15).

Initially, all insurance scheme members with a stroke diagnosis in 2010 and 2011 were selected. Because stroke is a severe acute illness that requires inpatient treatment as swiftly as possible, we used only inpatient diagnostic data (main diagnosis: stroke) in this study. All data relating to treatment before and after hospital admission or to partial inpatient treatment were removed to avoid the danger of classifying any follow-up treatment and referrals as new events.

This definition of a stroke event has also been used by Federal Health Monitoring at the RKI and other authors (3, 7, 16, 17). Individual studies have also included TIA (3), but TIA was excluded from our analysis.

To date no standardized approach has been adopted to define stroke recurrence in studies of routine data or registries. Authors have used different criteria or have not explicitly reported the criteria. The routine-data study by van den Bussche et al., for example, used a minimum period of 7 days between discharge after the initial stroke and readmission (7). International (registry) studies have mostly used a minimum period of 21 days between initial event and recurrence. Infarction within 21 days after the initial cerebral insult is categorized as a recurrence only if a different region of the brain is affected (18–20). These criteria were adapted in the context of our own study:

In all analyses, only those insurance scheme members were included who had continuous insurance cover throughout the relevant time period. No age limits were imposed. Only patients who had not had a stroke event in the pre-observation period from 2005 to the observed event in 2010/2011 were classified as incident cases. In the context of the long-term follow-up of patients with incident stroke, only those were included who had been continuously insured, without gaps in cover, until the end of the follow-up period (December 2016) or until termination of their insurance scheme (death or switch to another insurer). The maximum follow-up period was therefore 7 years. As this means different patient populations for the prevalence and incidence analyses, we standardized the documented incidence and prevalence rates according to the German standard population as in the 2011 census (21). Figure 1 shows how insurance scheme members were selected and the specific populations under analysis.

We used the statistics software package SPSS 25 for data evaluation and analyses. Information on the study population is presented descriptively. To determine the probability of recurrence and mortality over time, we undertook Kaplan–Meier survival analyses and Cox regression analyses. The level of significance was set at p ≤ 0.05.

Prevalence and incidence of stroke

Altogether we found 14 313 insurance scheme members who had sustained an incident cerebral insult in 2010 or 2011. The age and sex distribution and the stroke types were almost identical with the prevalence results. The ICD-10 coding showed that 2.4% of the events were subarachnoid hemorrhage (I60), 9.3% were intracerebral hemorrhage (I61), 2.6% were other nontraumatic intracranial hemorrhages (I62), 81.2% were cerebral infarctions (I63), and 4.4% were stroke events not specified as hemorrhage or infarction (I64). Relevant underlying disorders/risk factors were observed in many cases: 69% of patients had hypertension, 33% had diabetes mellitus, 31% had hyperlipidemia, 13% had atrial fibrillation, and in 4% of patients carotid stenosis had been diagnosed in the preceding year. The standardized 1-year incidence of stroke was 292 cases per 100 000 population (290 cases/100 000 population in 2010 and 294 cases/100 000 population in 2011). Table 1 shows stroke incidence and prevalence by age and sex.

Frequency and timing of stroke recurrence

We used a complementary Cox regression to analyze the influence of stroke type on the probability of recurrence. We selected subarachnoid hemorrhage (I60) as our reference category. Age and sex were further variables. Women were found to have a lower risk of recurrence than men (hazard ratio [HR] 0.871; p = 0.002). Furthermore, the risk increased with each additional year of life (HR 1.016; p <0.001). The risk of recurrence after intracerebral hemorrhage (I61) (HR 0.838; p = 0.270) and other nontraumatic intracranial hemorrhage (I62) (HR 0.774; p = 0.184) was not significantly reduced compared with subarachnoid hemorrhage. Significantly lower probabilities of recurrence were determined for cerebral infarction (I63) (HR 0.715; p = 0.019) and stroke events not specified as hemorrhage or infarction (I64) (HR 0.683; p = 0.032).

Our Kaplan–Meier survival analyses of mortality (Figure 3) showed that 30 days after an incident stroke, 6.8% of patients had died; after 90 days, this rate had risen to 9.4%. Looking at the longer term, the 1-year and 5-year mortality rates were 17.0% and 45%. In the context of complementary Cox regression analysis with the variables age, sex, type of stroke, and type of treatment/care, the influence of stroke type on the mortality rate and the influence of care delivered in a stroke unit were studied. Women had a lower risk of death (HR 0.837; p <0.001). The mortality increased steadily with the patient’s age at the time of the initial cerebral insult (per life year) (HR 1.07; p <0.001). The risk of death was significantly lower for other nontraumatic intracranial bleeds (HR 0.653; p = 0.001), cerebral infarctions (HR 0.776; p = 0.016), and strokes not specified as hemorrhage or infarction (HR 0.768; p = 0.025) than for subarachnoid hemorrhage. The difference between mortality for intracerebral hemorrhage and for subarachnoid hemorrhage did not attain significance (HR 1.162; p = 0.175) (Table 2).

Table 2
Cox regression for the outcome mortality*
Enlarge All figures

The present study investigated, on the basis of routine health insurance data, the incidence and prevalence of stroke, the frequency of stroke recurrence, the interval between initial insult and recurrence, and mortality after the initial stroke event. No previous studies of stroke in Germany have covered all of these aspects. Our study presents recent findings on stroke events in Germany and thus adds to the existing literature.

The results show a mean incidence and prevalence of 292 cases/100 000 population and 336 cases/100 000 population, respectively, for the period 2010/2011. The risk of recurrence was 3.4% within 90 days, 7.4% within 1 year, and 19.4% within 5 years. While the recurrence risk within the first year after a stroke is highest, it then falls up to the third year after the event and remains almost constant thereafter. The mortality risk after stroke is 6.8% after 30 days, 9.4% after 90 days, 17.0% after one year, and 45% after five years. Bleeding events were associated with higher mortality. Mortality was lower in patients who were treated in a stroke unit.

The findings on incidence and prevalence are consistent with previous estimates, although the results of the various analyses cannot be compared directly because of differences in inclusion criteria and in the age structures of the study populations (3, 4, 7–9, 22). Furthermore, the frequency of stroke events can change over time, e.g., owing to changes in lifestyle or improved options for prevention of stroke (17, 23). Additionally, analyses have shown that stroke rates differ by social status (5). The social structures of the populations should therefore also be considered when comparing studies.

To date, little information is available on the rates of stroke recurrence in Germany. This study adds comprehensive analyses of the rates of recurrence and mortality, for individual stroke types and overall, to the current literature. Two analyses of routine data found that 11.2% and 11.4%, respectively, of stroke patients experienced a recurrence within 12 months (7, 8). Data from the Erlangen Stroke Registry show that for ischemic stroke, the risk of recurrence was 11% within 1 year and 15% within 2 years after the initial cerebral insult (9, 23). Data from registry studies in other countries are available (18, 20, 24, 25). A meta-analysis of registry studies published in 2011 found a 30-day recurrence risk of 3.1%. The cumulative risks for recurrence after 1, 5, and 10 years were 11.1%, 26.4%, and 39.2%, respectively (23). Data on the time that elapses between initial stroke and recurrence are sparse. An Asian study reported an average interval of 58 months (26).

The principal strengths of the present study are the large sample size and the long follow-up period. However, it also features limitations arising from the use of GKV routine data. These routine statutory health insurance data include only services and diagnoses reimbursed by the GKV. The greatest disadvantage is the lack of clinical information, such as diagnostic or laboratory data, as well as details of stroke severity, quality of life, and impairments (12). Further uncertainty relates to the validity of the diagnoses. The data merely show that the billing hospital assigned a stroke diagnosis. The clinical-neurological investigations on which this diagnosis was based are unknown. Even though the indication of stroke makes incorrect coding of the diagnosis unlikely, misclassification of the different stroke types cannot be ruled out (7). Comparisons show that the classification into the different stroke types resembles that in other studies. Moreover, we may have underestimated incidence and prevalence, as stroke events that did not result in hospital treatment were not included in the analyses. Although the severity of a stroke event means it is unlikely that patients receive merely outpatient care, persons who died directly as a result of their stroke and therefore did not receive inpatient treatment were not included in the data. Similarly, recurrences that occur during the initial inpatient stay (early recurrences) cannot be reflected in routine data. Furthermore, questions arise with regard to the representativeness and generalizability of the results. In the present analysis, we evaluated data from the AOK statutory health insurance fund for Lower Saxony. By standardizing incidence and prevalence rates, we at least adjusted for some sources of bias. Slight selection bias owing to specific characteristics of the insurance clientele at a given point in time cannot be ruled out, however (2, 13, 28).

The present study investigated the rates of stroke recurrence and the incidence and prevalence of stroke events on the basis of routine health insurance data. The recurrence rate was found to be 7.4% after 1 year and 19.4% after 5 years. Specialized stroke care was associated with lower mortality. Long-term treatment and close monitoring of risk factors are essential to minimize the risk of recurrence. In view of ongoing demographic trends, stroke care will become increasingly important.

Translated from the original German by Birte Twisselmann, PhD 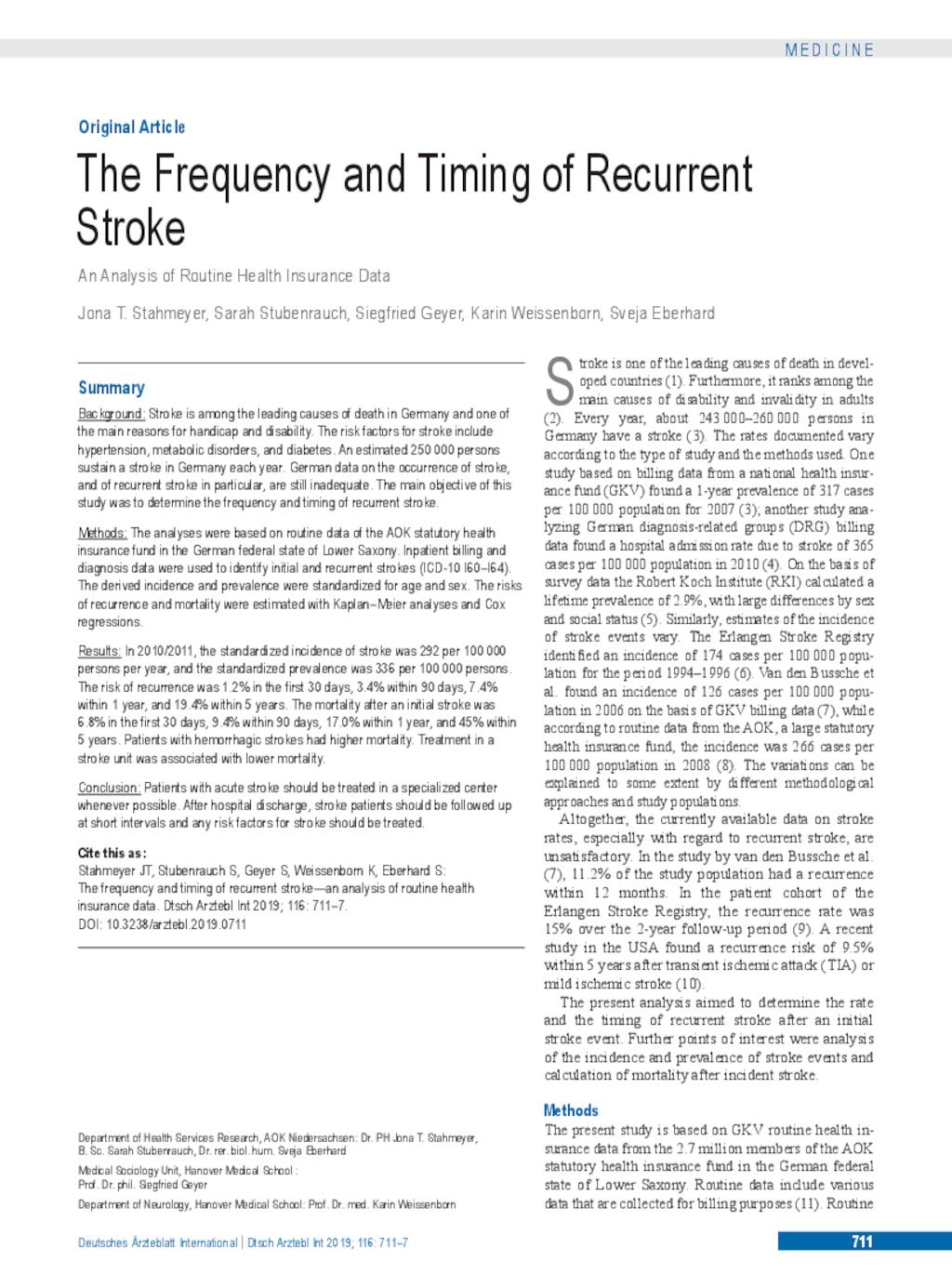