Background: The in-hospital mortality after visceral surgery in Germany is unknown.

Methods: In this retrospective, descriptive analysis, nationwide hospital billing data based on diagnosis-related groups (DRG) over the period 2009–2015 were studied to determine the in-hospital mortality, complications and their management, and deaths after documented severe complications (failure to rescue, FTR) after visceral surgery in Germany. Organ-system subgroups were defined and subdivided into frequent operations (inguinal hernia repair, appendectomy, thyroid operations, cholecystectomy), colorectal operations, and complex operations (surgery of the esophagus, pancreas, liver, and stomach).

Conclusion: In Germany, in-hospital mortality after visceral surgery is not uncommon, with a frequency of nearly 2%. Improved complication management after complex operations appears necessary. A limitation of this study is the identification of complications from anonymized billing data.

Surgery represents a fundamental pillar of treatment for a multitude of diseases. In the case of life-threatening indications such as appendicitis (1) or cancer therapy (e.g., treatment of colorectal liver metastases [2]), a surgical approach is often superior to conservative treatment strategies or, indeed, without alternative. As with all treatments, surgery is also associated with a certain level of morbidity and mortality. From experience, patients and treating physicians alike harbor anxiety about the occurrence of complications in surgical procedures (3). This can result in curative therapies being declined or delayed (4). In addition, recommendations advise that, as part of their consultation and information, patients should be informed about the potential risks of surgery (e.g., mortality, complication rate), as well as the anticipated hospital time (5). There are numerous studies in the literature describing morbidity and mortality following surgical procedures (6–8). These data often do not originate from the German healthcare system or are based on selected patient groups. This produces a problem for physicians working in Germany in terms of data interpretation. In order to obtain a Germany-wide, valid analysis of morbidity and mortality following visceral surgery, nationwide invoicing data for the years 2009–2015 were analyzed for hospital mortality, complications, and survival following severe complications, i.e., failure to rescue (FTR). The failure to rescue index refers to the proportion of patients that die following severe but essentially treatable complications during their hospital stay (9). On the basis of the data presented in this article, patients can be provided with valid information on the morbidity and mortality of relevant surgical procedures, particularly in terms of surgical procedure-specific risks. The data can also be used to generate hypotheses on how the treatment of patients in Germany can be improved.

A retrospective descriptive analysis of Germany-wide individual case data was carried out on the basis of diagnosis-related group (DRG) statistics. Hospital treatment cases with a German “Operations and Procedures Code” (OPS code) for a visceral surgery procedure were selected. Procedures according to OPS code (eTable 1), age, sex (eTable 2), hospital identifier, length of hospital stay, reason for discharge, and diagnoses according to ICD-10-GM (eTable 3) were anonymously assigned to each treatment case. All treatment cases from the period 2009–2015 were included. Data were retrieved with the help of the research center of the German Federal Statistical Office. Case data with missing, incomplete, or implausible values were excluded from the investigation in a first step. On the basis of the documented OPS codes, treatment cases were then analyzed in terms of comorbidities and complications (eTable 1, eTable 3).

Typical visceral surgery procedures were grouped according to organ system and increasing complexity, as well as frequent and complex surgery (Table 1). Frequent surgical procedures include:

Colorectal surgery was recorded as a single group, since, according to the authors, these are procedures that are technically advanced but nevertheless frequently performed. Case data with combinations of frequent surgical procedures (e.g., cholecystectomy and appendectomy) or several complex/extended procedures during one hospital stay were excluded, since it was not possible to generate a meaningful hierarchy between the primary and follow-up procedure. Therefore, 0.06% (frequent procedures) and 0.38% (advanced/complex procedures) were excluded from the subgroups. If a procedure in both the group of frequent and the group of advanced/complex surgical procedures (e.g., cholecystectomy and esophagectomy) was documented for a treatment case, the complex procedure was deemed to be the main procedure for the present study. Statistical analysis was per-formed using Stata 14 (StataCorp LP, College Station, Texas, USA). Documented comorbidities, complications, length of hospital stay, and hospital mortality were analyzed for each treatment case. The following events were defined as severe complications:

Interventions indicating a complicated course (mechanical ventilation >24 h or transfusion of more than five red blood cell concentrates) were also included in this group. The FTR rate is calculated from the incidence of severe complications and the observed hospital mortality of patients with severe complications. The respective 95% confidence interval (95% CI) was calculated according to Tsai et al. (10).

Approximately half of all operated patients were aged under 54 years. Of the operated patients, 52% were female and 48% male. Patients in the complex surgery group (liver/pancreatic/esophageal/gastrointestinal surgery) were older on average compared to patients in the frequent procedures group. The percentage of patients aged over 75 years in the complex surgery group was between 15.8% and 33.6% versus 6.1% and 14.5% in the frequent surgery group. The most common comorbidities included arterial hypertension (29.9%), diabetes mellitus (9.2%), and obesity (7.9%) (eTable 2).

The risk of complications rose in colorectal and complex procedures compared to frequent procedures: severe complications occurred in over a third of patients operated in the complex gastrointestinal and esophageal surgery group (36.7% [36.21; 37.19]/37.8% [37.19; 38.41]).

In summary, a comparison of simple and complex surgical procedures shows that the overall complication rate for complex procedures is around 10-fold higher compared to simple procedures (Table 2).

The failure to rescue rate is generally used as an indicator of hospital quality (16). The FTR rate here describes the management of complications by comparing the proportion of patient deaths following the onset of a severe but essentially treatable complication with the complication rate. The percentage of patients to whom failure to rescue applies depends on the size of the hospital, the number of procedures performed per hospital, surgeon experience, as well as other variables such as a hospital‘s safety structure and management (6, 9, 17). As with mortality, the data from visceral surgery presented in this article show a significantly higher rate of complications and FTR in complex surgical procedures compared to simple and frequent procedures. However, one must conclude, albeit with restrictions, that the causal link between the occurrence of the complication and the death of the patient cannot be reliably demonstrated on the basis of the data here, despite the fact that this is assumed in the literature (9).

While hospital mortality was 1.9% relative to the total collective, it is 8.5% if one considers complex surgical procedures in isolation. Colorectal and complex visceral surgical procedures account for 23% of all surgical procedures in Germany. A total of 90.6% of all postoperative deaths occur following these two types of surgery. Therefore, a general improvement in care can be achieved particularly effectively through progress in these subgroups.

Of course, an adequate preoperative risk assessment and optimization should be carried out for all patients (18, 19). However, the primary success factor in reducing hospital mortality is not only the avoidance of complications, but, more particularly, also the competent and successful management of the ones that do occur (9). Compared to other surgical disciplines, one sees the strongest link between the management of complications relative to hospital volumes and postoperative mortality in visceral surgery (20).

Hospital mortality for pancreatic (10.1%) and esophageal procedures (9.5%) is higher in Germany compared to other European countries (pancreas 3.6%, esophagus 3.9–4.7%) and North America (pancreas 6.8%, esophagus 4.7%) (21–25). For this reason, current minimum spending by the German Joint Federal Committee for these procedures has now become a subject of discussion (22, 26, 27). The findings presented here demonstrate that hospital mortality is also high in complex liver and gastrointestinal surgery. A study on 9000 patients (a cohort study using the US Nationwide Inpatient Sample database) showed a hospital mortality rate following elective surgical procedures for gastric cancer of 3%. In the case of emergency surgical procedures, mortality was 8% (28). Another analysis of data from the NSQIP (American National Surgical Quality Improvement Program) revealed a 30-day mortality rate following oncological gastrectomy of 4.1% (29). Various oncological gastrointestinal procedures were pooled in the data, yielding a hospital mortality rate of 11.7%. In a US cohort study, hospital mortality following oncological liver surgery was 2–4% (Germany 7.7%) (7). A comparison between the US studies and the German data is possible only to a limited extent due to the sometimes varying modes of patient data selection and evaluation. An improvement in complication management is needed nevertheless, especially following complex surgical procedures. Therefore, other studies are required in order to achieve an improvement in patient treatment.

The retrospective nature of the present study represents a limitation. In addition, a distortion of diagnosis-related-group data due to incorrect or selective hospital coding is theoretically possible. However, it should be possible to minimize this aspect via a review of the documentation by the medical service of the health insurance companies in Germany (Medizinischer Dienst der Krankenkassen, MDK). The US data also show that administrative data is readily comparable to the medical data (30). The use of the institution identifier to distinguish individual hospitals can also lead to a certain degree of inaccuracy in the number of hospitals. There is a possibility that two or more hospitals submitted their data under the same code number (31). It must also be borne in mind that no causal links can be generated in this retrospective study.

A further limitation lies in the fact that it is not possible to draw any conclusions on a change in the frequency of complications or the rate of FTR over the study period. However, studies dealing specifically with individual procedures show no change in mortality in recent years for complex and colorectal procedures (13, 21, 22).

A major advantage of the present analysis is the complete and non-selected picture it provides of the German health system across all patients. The rate of excluded cases due to lacking data was extremely low at under 1%.

In summary, it can be concluded that, in an international comparison, mortality in frequent visceral surgical procedures in Germany is similarly low. Approximately 90% of all deaths following surgery are related to advanced or complex procedures. Since FTR reflects the quality of care in the management of complications, one should evaluate which measures are needed in terms of infrastructure and personnel in order to reduce the FTR rate following complex procedures.

Acknowledgments
We would like to thank Prof. Dr. Stefan Störk (German Center for Heart Failure, Würzburg) for his help in responding to expert comments. 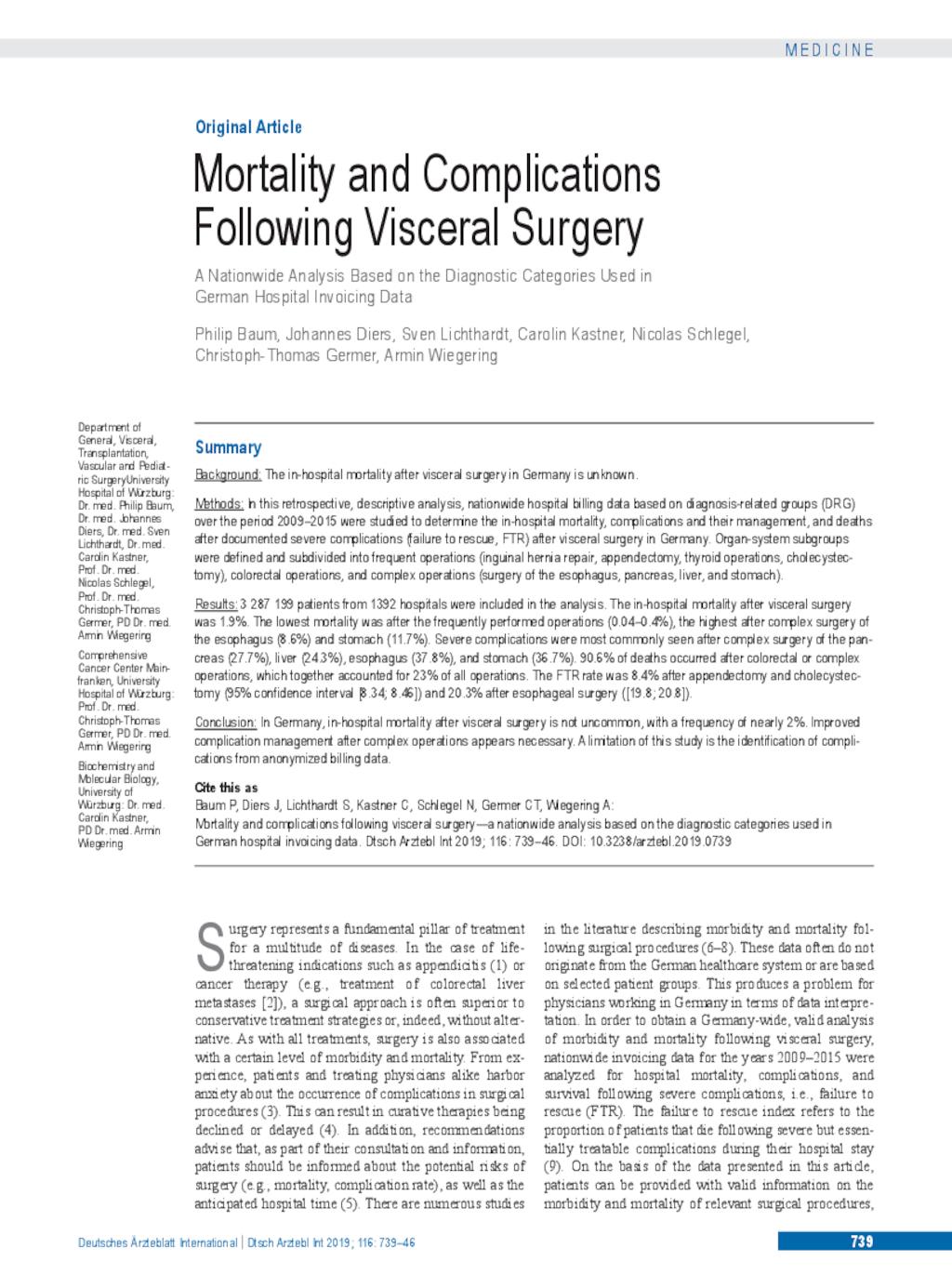