A particular challenge for the health service

A health-care system that is highly normed and specialized on many levels, with flat-rate payment for many services, often takes less than adequate account of persons with intellectual and developmental disability (IDD) or multiple impairments. This is especially true in the case of intellectually impaired adults.

In view of this situation, the review article by Tanja Sappok and coauthors on the following pages, which contains a broad overview of the medical care of intellectually impaired persons, is very welcome. The authors provide a highly detailed discussion of the clinically relevant aspects of somatic medicine for the intellectually impaired on the one hand, and of psychiatry and psychotherapy on the other. The intersection between these two broad areas in this population is particularly important and is clearly explained (1). The authors also point out the opportunities for continuing medical education in the field. Presenting this requires a larger framework that has fortunately been made available here.

In most persons who are severely intellectually disabled, the cause of the developmental disturbance can be identified (e.g., genetic disease or perinatal hypoxia-ischemia). Moreover, diseases and disorders that are commonly associated with IDD—such as epilepsy, sensory dysfunction, motor dysfunction, and behavior problems (so-called challenging behaviors)—are more common in this group than among persons who are only mildly or moderately intellectually disabled (4).

The identification of the genetic cause of IDD in an individual patient, or its attribution to a particular genetic syndrome, can have major implications for the potentially associated abnormalities of organ development and predispositions to particular diseases, thus pointing the way to corresponding preventive interventions. Furthermore (as we have learned, for example, from Cornelia de Lange syndrome), a single clinical phenotype may reflect an underlying abnormality in any of a variety of different genes; the phenotype itself may also be highly variable, i.e., there may be a phenotypic spectrum (5). These facts have a major influence on clinical decision-making.

As reported in a recent systematic review, the life expectancy of persons with intellectual disabilities is 20 years less than that of the population at large in high-income countries (6). One may be inclined, at first, to attribute this to the diseases that accompany intellectual impairment and the syndromes in which it arises, such as epilepsy, cardiac malformations, and their sequelae. The authors of the present review, however, conclude that the pattern of causes of death in the intellectually impaired differs from that of the typically developed population in such a way as to imply that some deaths in this group are, in fact, preventable. For example, a comparative study from Australia revealed concrete, preventable causes of death in 38% and 17% of cases among persons with and without intellectual impairment, respectively (7).

Clinical experience suggests that life-threatening conditions in intellectually impaired persons often arise because of a lack of recognition, or incorrect attribution, of pain. The specific, expert knowledge is often lacking that would enable rapid, correct diagnosis followed by prompt treatment—for example, in a patient with tuberous sclerosis and a painful, life-threatening hemorrhage from a renal angiomyolipoma (the most common cause of death in this neurocutaneous syndrome). Systematic and specific communication with the patient, and assessment of his or her painful condition in a manner tailored to the special needs of persons with intellectual disability, can thus make the difference between life and death (8).

Despite this, patients’ families and significant others often complain of suboptimal communication in the hospital, saying that doctors and nurses have difficulty engaging with the way intellectually disabled persons communicate, while themselves tending to communicate in a standardized fashion, without taking the abilities of the individual patient into account. Nor do they take enough time with patients or make use of the patients’ communication aids (9).

A further problem is that, for diverse reasons, physicians—even those with experience in the field—often wrongly assess the intellectual and communicative abilities of patients with intellectual impairment.

In both the inpatient and the outpatient settings, the spatial arrangements, the personnel and procedures, and, above all, the specialized competence of the staff must be suited to the treatment of persons with IDD. Interdisciplinary teams must be ready to confront the kinds of problems that arise frequently in this context, such as epileptic seizures or problem behavior.

It is, above all, the marked heterogeneity of intellectual impairments that makes it difficult to conduct empirical studies whose findings would underpin evidence-based diagnosis and treatment.

The goal of providing adequate care in the general health-care system for intellectually impaired patients can only be achieved if the knowledge that physicians need to treat these patients is already imparted in medical school. Additional certification of expertise in “medicine for persons with intellectual or multiple impairment,” analogous to certification in other medical fields, might also help these patients considerably. In Germany, the new medical centers for adults with impairment (Medizinische Zentren für Erwachsene mit Behinderungen, MZEB) are already places where the requisite experience can be obtained. The availability of an additional certification in this area would also be expected to increase the attractiveness of the field for young physicians deciding on the direction of their careers (10). 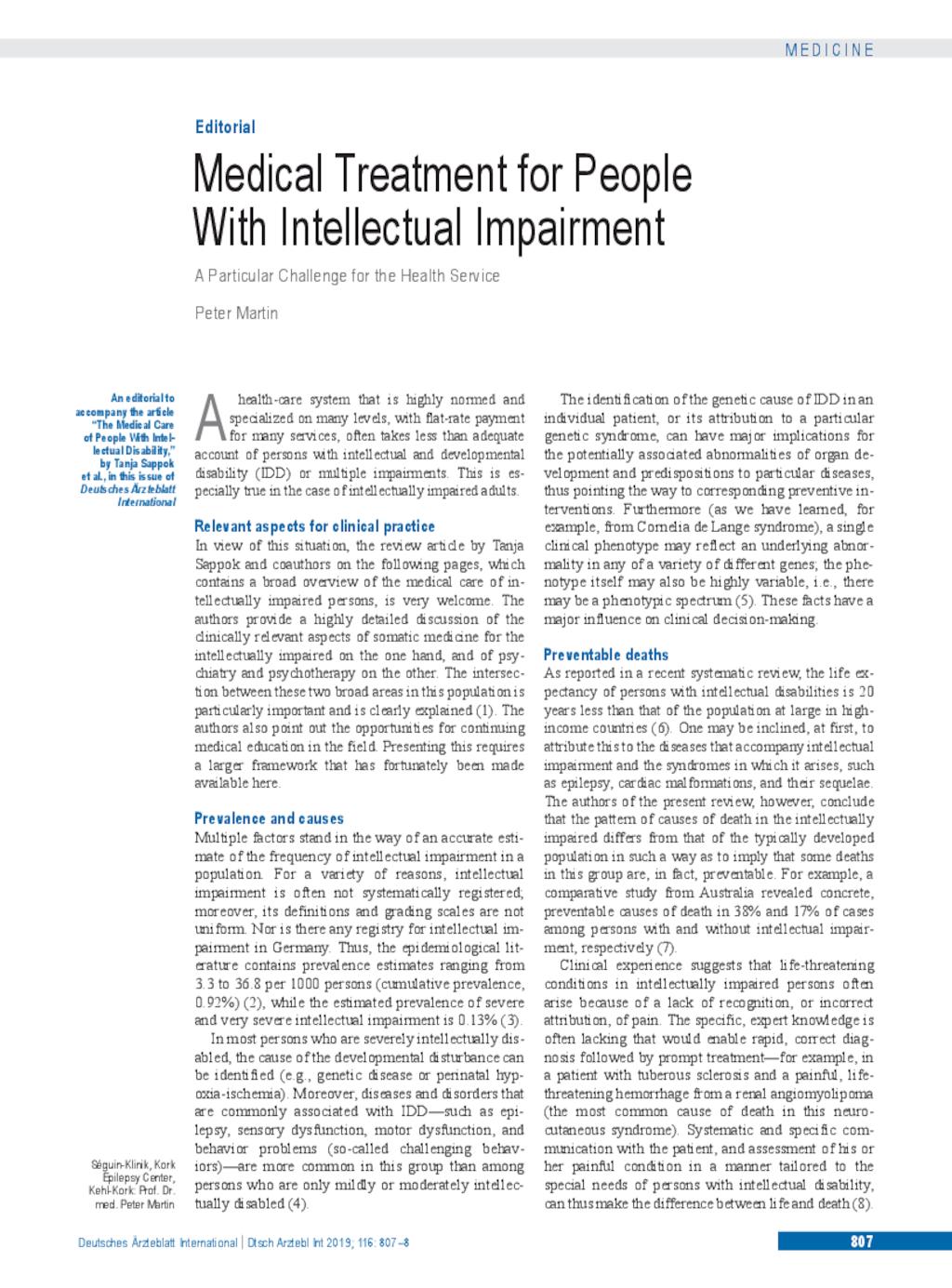