Sport and Physical Activity in Epilepsy

Background: For many years, people with epilepsy were advised not to engage in sports. In this systematic review, we investigated whether persons with epilepsy exercise less than the general population, and what effect physical activity has on epilepsy.

Methods: A literature search was carried out in PubMed and the Web of Science, and 14 269 studies were entered into the selection process. The selected studies were assessed for their methodological quality and accordingly assigned an evidence level.

Conclusion: There is no reason to forbid persons with epilepsy to participate in sports; they should, rather, be encouraged to do so. The decision on a particular type of sport should, however, be taken individually in each case.

Epilepsy is a common neurological disorders with a lifetime prevalence of 7.6 per 1000 persons (e1). In addition to recurrent seizures, epilepsy is also associated with comorbidities such as cognitive and psychological problems, as well as social difficulties (e2). Despite the known positive effects of sports and physical activity on quality of life and general disease prevention (e3), patients with epilepsy have long been discouraged from participating in sports activities (e4). This recommendation is likely based on the fear that sporting activity may cause injuries, potentially induce seizures, and have a negative effect on disease course.

However, over the past few decades, studies have shown that sports-related injuries are not more common in these patients compared to the general population (e5). Therefore, the questions arise as to whether patients with epilepsy avoid sports and take less physical exercise than the general population on the basis of unverifiable rationales and prejudices (e6) and whether this leads to further disadvantages for this group.

In 2016, the International League Against Epilepsy (ILAE) published a consensus paper that recommends safe sports participation for patients with epilepsy (e7). It is unclear which positive effects of sports on actual disease activity these patients are being deprived of. Therefore, the aim of this systematic review is to answer the following questions:

The literature search was conducted on 31 January 2019, in the PubMed (Medline/PubMed Central) and Web of Science databases. The following search terms were used: (epilepsy OR “AED” OR seizure OR antiepileptic OR epileptic) AND (exercise OR “physical activity” OR sport OR training OR “physical effort” OR “physical therapy”). Longitudinal and cross-sectional human studies, as well as case studies, were included. Diagnosed epilepsy and endpoints on physical activity of any form were used as additional inclusion criteria. With regard to activity habits, only controlled studies were included.

A total of 14 269 studies were found and included in the selection process, which is presented in the Figure. The studies were selected and evaluated by two independent reviewers (FvdB, CR).

Interventional studies were assessed according to the risk-of-bias principle (e9). Seven assessment categories were analyzed per study:

The risk for each bias in both assessment instruments could be classified as high, unknown, or low. High and unknown risk were assigned one point and low risk no points, thereby achieving an overall score for each study. The higher the score, the worse the methodological quality. Case studies, epidemiological studies, and interview-based studies were not assessed for methodology. Methodological quality assessments were performed for 10 interventional studies and 25 cross-sectional studies.

The included studies were assigned an evidence level (e11). Studies with a comparison group—i.e., with a healthy or diseased control group or with a sample divided into active and inactive, or with group observation over several time points—were classified as evidence level “2.” All studies without a comparison group in the cross-section were classified as level “3.”

In all, 42 studies were included in the systematic review. These studies can be divided into seven groups:

Altogether, 15 studies investigated physical activity in patients with epilepsy compared to healthy individuals. Of these, six evidence-level “2–” studies showed that individuals with epilepsy are less physically active (1–6). In addition, five studies (n = 4 evidence-level “2–” and n = 1 “2+”) reported lower physical fitness (in relation to various aspects such as VO2max, blood pressure) compared to healthy controls (7–11). In contrast, the results of three other studies (evidence level “2–”) revealed no differences between groups in terms of physical activity (12–14). However, a further study (“2+”) found an association between physical fitness (activity) early in life and a reduced risk of epilepsy in later life (15).

In all, 17 studies investigated the effect of physical activity on comorbidities such as anxiety and depression, as well as quality of life. Ten of these studies (“2−” n = 8, “3” n = 2; survey-/interview-based studies, combined studies, studies on one-time physical effort) showed physical activity to have a positive effect (4, 9, 12, 14, 16–21). The results of six interventional studies (n = 2 evidence-level “1–”, n = 4 “2−”) revealed a similar picture. Only one evidence-level “2−” combined study found no association (e12).

Altogether, 21 studies investigated the effect of physical activity or one-time exertion on seizure frequency. Two studies reported no seizures during a one-time physical activity (22, 23) (evidence level “2−”). In three studies, a reduction in epileptiform discharges during physical exercise testing was achieved (2, 24, 25) (“2−” n = 1; “3” n = 2). However, two of these studies found a rebound effect, with an increased number of discharges during the recovery phase compared to the resting phase (24, 25). Two interventional studies (“1−”) found a statistically significant reduction in seizures as a result of completing the exercise program in the epilepsy exercise groups (p <0.01; p <0.001) (26, 27). A survey-based study identified a statistically significant association between increased physical activity and a reduced number of seizures (p <0.05) (“3”) (e13). One further study revealed a trend towards a correlation between a higher frequency of seizures and lower physical activity (“2−”) (5).

Three survey-based studies reported a heterogeneous picture in terms of the effect of physical activity on seizures, with sports triggering seizures in some patients and not in others (“2−” n = 2; “3” n = 1) (6, 8, 28). The effect of physical activity on seizure frequency was similarly inconsistent in four interventional studies (“1−” n = 1, “2−” n = 3) (29–32). In summary, a total of 49 patients (with focal and/or generalized epilepsy) took part in three of these studies (29–31). The frequency of seizures remained unchanged by the intervention in 12 subjects. Frequency during/after training diminished in 25 subjects and rose in 12. A further interventional study (“2−”) identified no change in seizure frequency in the exercise group following a Kempo karate program (33). Four case studies described only individuals in whom sports/physical activity induced seizures (“3”) (34–37). The eResults section provides the study results in greater detail. The results of studies with the highest level of evidence (“1−” and “2+”) referred to in this review are additionally shown in Table 1.

The median number of points for the survey-based studies was four, for the combined cross-sectional studies it was 4.5, and for the studies on one-time physical activity it was four (maximum possible number of points, highest risk). The results are presented in detail in eTables 1a and 1b.

Only five studies could be classified as evidence level “1−” and “2+.” However, one must bear in mind that sports intervention studies are generally unable to achieve a “1+” evidence level due to their design.

The methodological quality of all studies included is overall low across all study types. The evaluability and quality of the studies is limited due to:

A number of limitations arise as a result of poor patient accessibility as well as the peculiarity of this group. Comparability is overall limited, particularly in the case of studies on seizure frequency, due to the differing intervention programs, exercise intensities, and duration/frequency of the programs.

In addition, most studies amalgamated various syndromes and types of seizures, which needs to be viewed critically, particularly in terms of seizure frequency, since this can differ between syndromes. Therefore, reliability in terms of the effect of physical activity on seizure frequency remains limited. Results from animal models are clearer due to the number of studies and their comparable design: physical exercise reduced the number of recurrent seizures in the majority of animals (e14).

Potential mechanisms for a possible anticonvulsive effect include increased release of hippocampal brain-derived natriuretic factor (BDNF), increased neurogenesis in the cornu ammonis 1 (CA1) region of the hippocampus, and increased sprouting of mossy fibers (e14). Without exception, all studies included in this investigation demonstrated a positive effect for physical activity on various aspects of comorbidity and quality of life. Despite their low methodological quality, the absence of a negative effect in these studies demonstrates the relevance of exercise in this context (studies with evidence levels 1−, 2−, 3).

The occurrence of isolated cases—as well as subjective reports made by patients—suggests that sports may induce seizures or worsen seizures in general. Potential pathophysiological mechanisms could be linked to, e.g., hyperventilation-induced hypercapnia or a rise in body temperature, although systematic investigations on this mechanism are still lacking.

When providing individual counseling on safety during sports activity, one can use clearance to drive a motor vehicle as an approximate guide. As in the assessment of fitness to drive, one should take the following factors into consideration when recommending a particular activity and intensity (for example, running or cycling) (e7):

In case of doubt, types of sport that carry no significant risk, such as team sports, dancing, and golf, can be recommended for all patients with epilepsy. An individual risk assessment should always be carried out for moderate-risk types of sport such as alpine skiing, gymnastics, and swimming, as well as high-risk sports such as climbing, motor sports, and surfing (e7). The same applies to cycling, since here—in contrast to driving motorized vehicles (including e-bikes)—neither a clear legal basis nor guidelines are available for guidance. With cycling, however, there is a significant risk of injury, given that the cyclist is exposed in a virtually unprotected manner; therefore, patients with epilepsy should only be allowed to return to cycling following a critical consideration of their status.

As a general rule, clearance to engage in sports in or on water in epilepsy requires special evaluation due to the risk of peri-ictal drowning. Here again, individual decisions need to be made on the basis of the described factors. Having said that, Ryan and Dowling showed that, of 482 deaths from drowning among patients with epilepsy, only 25 cases were directly related to seizures (e15). Nevertheless, caution is generally advised in water sports. Tools that may be helpful in the assessment of individual risk include additional investigations such as stress EEG, although there are currently no diagnostic data available to guide clinical decision making. In general, however, the overall risk of injury in patients with epilepsy does not appear to be higher compared to healthy individuals (e5, e15)—indeed, sports-related injuries occur less frequently in epilepsy patients (e5).

There is no rationale to support a general ban on sports for patients with epilepsy. As a general rule, an individual risk assessment should be performed for each particular case. However, it is possible to find a type of sport with a favorable risk profile for the vast majority of patients. In this context, epilepsy rehabilitation sports groups could also offer an entry point. Despite the scant number of studies to date and the heterogeneity of their results, there is rather evidence to support the assumption that sport activity does not lead to an increase in seizures, but—if it has any effect at all—results in a reduction in the number of seizures.

The remaining authors state that they have no conflicts of interest. 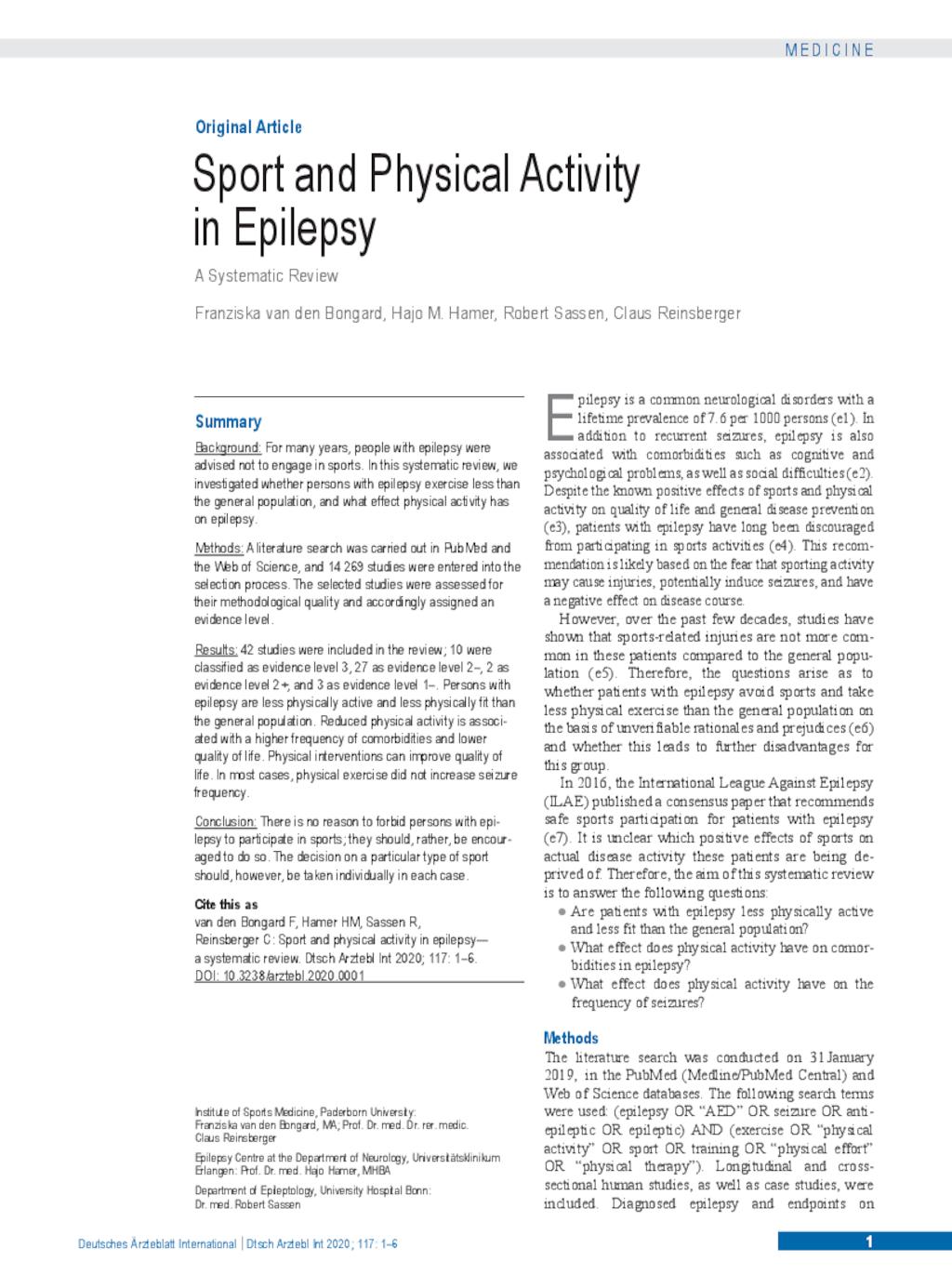