We thank Mr. Klick for his comments regarding the prognosis and prevention of osmotic demyelination syndromes (ODS). We agree that earlier and better detection of ODS using magnetic resonance imaging (MRI) has not been the decisive basis for improving the disease prognosis. As discussed critically in our article (1), the increased use of MRI has led to the detection of many ODS patients who are oligosymptomatic and/or have symptoms only visible by morphological imaging, and their inclusion in the overall prognosis makes it appear to be better than in previous years. Nevertheless, modern intensive care medicine has an increasing number of early rehabilitation approaches that also play a part in improving the prognosis. Having a good long-term outcome is now more frequent, even for patients with initial severe clinical impairment (2). The most relevant influence on prognosis, however, is the careful preventive therapy in the form of a slow electrolyte and osmolality correction, as described in our section Therapy, and we would also like to thank Mr. Klick for highlighting the importance of prevention.

We thank Prof. Lübbecke for his practice-oriented questions. With respect to producing the 3% NaCl solution, it makes sense from our point of view to carefully measure the quantities mentioned. While an emergency preparation is usually not necessary, there is nothing to be said against the proposed formula if this is the case. With respect to the initial infusion rate, a correction of 1.5–2 mmol/L/h can be considered for severely affected patients for a maximum of 3 h. The infusion rate can then be adjusted to the sodium deficit (for correction up to 120 mmol/L) (0.5 × kg body weight × [120 minus current serum sodium mmol/L]). This correction can be continued for a maximum of 12 mmol/L/24 h. Overall, however, it is usually better to do nothing than to do too much if necessary. Therefore, a quick potassium correction that exceeds the maximum infusion rate mentioned is not necessary. Any neurological complications (e.g. epileptic seizures) must of course also be treated with an anticonvulsant in addition to sodium and/or potassium correction.

We would also like to thank Dr. Lichtenstein for his critical remarks on the overly-brief etiology of ODS. We agree about the importance of clarifying the underlying cause in patients with ODS, as we addressed in the article (1). While we would have liked to have intensively examined and discussed the etiological background of hyponatremia, this would have required its own review. Here it is important to note the frequency of hyponatremia and to refer to the various reviews on this topic (3–5), as well as the article mentioned by Dr. Lichtenstein. 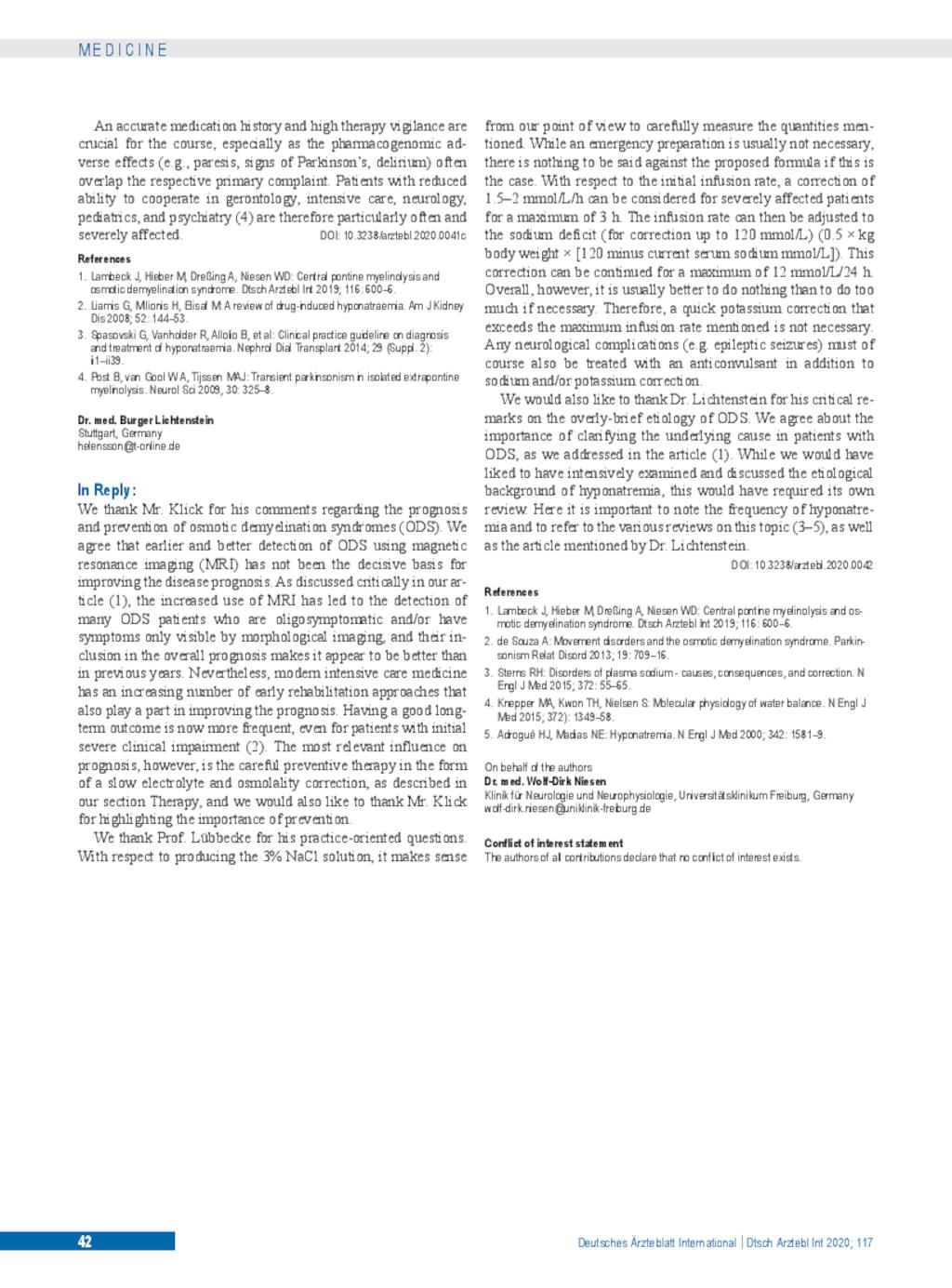