The Association Between Orthogeriatric Co-Management and Mortality Following Hip Fracture

An observational study of 58000 patients from 828 hospitals

Methods: This observational study was based on health insurance claims data from 58 001 patients (79.4% women) aged ≥80 years admitted to the hospital with hip fracture between January 2014 and March 2016. They were treated in 828 German hospitals with or without orthogeriatric co-management. The outcome measure was cumulative mortality with adjustment of the regression analyses.

Conclusion: A multidisciplinary orthogeriatric approach is associated with lower mortality and a longer index stay in hospital after hip fracture.

Fragility fractures occur mainly in very old people and cause a high disease burden (1, 2). The fracture type with the most serious consequences in this age group is hip fracture (3,4). Although the prognosis has improved over recent decades, mortality following hip fracture is still high (5,6): the excess mortality during the first year after fracture (compared with control populations) ranges from 8.4% to 36% (7). Hip fracture patients are often frail with several comorbidities. Therefore, the fracture often represents only one of a number of medical problems. These problems are often beyond the scope and expertise of orthopedic surgeons. To deal better with the special needs of these patients, models for collaborative care of patients with fragility fractures have been developed in which orthopedic surgeons and geriatricians work together (8–10).

A number of clinical trials have investigated the effects of different forms of multidisciplinary co-management on outcomes (e.g., physical function, length of stay, discharge destination). A randomized controlled trial (RCT) from Norway, for example, demonstrated better physical function 4 months after hip fracture in the group that received comprehensive geriatric care (11).

The sample sizes of the existing individual RCTs are not sufficient to detect differences in mortality. Three systematic reviews of RCTs, however, reported that mortality was lower, albeit nonsignificantly so, in hip fracture patients who received orthogeriatric co-management (12–14). Moreover, several observational studies have compared newly established orthogeriatric units with historical cohorts (15–18). Most of these report a mortality advantage for hip fracture patients treated in the orthogeriatric units. The numbers of cases in these studies were low, however, and the results may have been biased by temporal trends and other factors such as case selection.

Recently, three observational studies from Australia, Denmark, and Italy with larger cohorts of hip fracture patients have been published. They all reported lower 30-day mortality rates amongst the patients with orthogeriatric co-management (19–21).

The basic data set consisted of 131 258 patients aged ≥65 years who were admitted to German hospitals with a hip fracture between 1 January 2014 and 31 March 2016 and insured by the Allgemeine Ortskrankenkasse (AOK). The AOK is Germany’s largest health insurance company and covers nearly one-third of Germany’s 82.5 million population. Patient-related data were provided by the Research Institute of the AOK (Wissenschaftliches Institut der AOK, WIdO).

Hip fractures were identified using the hospital admission diagnoses S72.0 and S72.1 (ICD-10). Our a priori evaluation strategy restricted analyses to patients aged ≥80 years, because they are by definition regarded as geriatric patients. However, the same analyses were also performed in hip fracture patients aged 65–79 years to find out whether the results were consistent in younger patients.

To avoid the potential influence of low sample sizes on treatment quality and improve comparability between the two groups, we excluded patients treated in hospitals with fewer than 80 hip fracture cases per year.

The number of hip fractures per hospital per year was estimated on the basis of the number of patients with hip fracture in the data set and the market share of the AOK. A sensitivity analysis that also embraced patients from the excluded hospitals changed the results only marginally (data not shown). The data preparation procedure is presented in Figure 1.

It might at first sight seem simplest to conduct analyses based on whether or not the patient received complex early geriatric rehabilitation treatment and thus an OPS8-550 code. This would be incorrect, however, because for the code OPS8-550 to be assigned, the orthogeriatric treatment must extend over a period of at least 14 days. Classification on the basis of the individual OPS8-550 coding would introduce immortal time bias (survivorship bias) (22). Identifying which hospitals provided orthogeriatric co-management based on the coding of patients treated in the hospitals overcame this problem. Patients who changed treatment type, e.g., were transferred from a hospital with to a hospital without orthogeriatric co-management, were excluded (Figure 1).

The dependent variable was cumulative mortality at 30, 60, 90, and 180 days after hospital admission due to a hip fracture.

Age (in years) at the time of the fracture and sex were documented in the claims database. Information about care needs (yes/no) and nursing home status was available only on a quarterly basis. For adjustment and stratification of the analyses, we used information from the quarter before the fracture (Q-1).

Assessment of the need for care is compulsory under German law (Social Code XI). Allocation to one of the three levels of care (valid up to the end of 2016) can be used as a surrogate marker of functional impairment (23).

The number of hip fracture patients per hospital per year was used as a surrogate for the size and/or the expertise of the trauma surgery unit. Time to surgery has been shown to influence mortality (24). Therefore, time from hospital admission to surgery was determined and used as a covariable.

Because reimbursement for OPS8-550 procedures depends on good documentation at the treating hospital, the coding of comorbidities seemed to be particularly comprehensive in these patients. There was thus a danger that using conventional comorbidity scores might bias the results. Instead, we employed a medication-based comorbidity score (25), based on medical prescriptions in the quarters before and at the time of the fracture.

To control for confounding, we included all covariables in the analysis models (see eMethods for a detailed description of the statistical methods)

When the index hospital length of stay and any periods of subsequent inpatient rehabilitation were summed, the mean total stay in hospital was 41.4 [41.2; 41.6] days for the hospitals with and 39.3 [39.1; 39.5] days for those without orthogeriatric co-management (Table 1).

Patients from hospitals with orthogeriatric co-management were less likely to die following hip fracture than patients from hospitals without orthogeriatric co-management. The difference in mortality was greatest immediately after admission and decreased during the next 6 weeks (Figure 2a). After 6 weeks, mortality by day was about the same in both groups.

Figure 2
Association of orthogeriatric co-management (OGCM) with mortality (a) and cumulative mortality (b) within 180 days after hospital admission in patients with hip fracture, adjusted for age, sex, care needs in the quarter before the fracture (Q-1), nursing home status in Q-1, number of hip fracture patients per hospital per year, days from hospital admission to surgery, and a medication-based comorbidity score
Enlarge All figures

Table 2
Association of orthogeriatric co-management with cumulative mortality at 30, 60, 90, and 180 days after hospital admission in patients with hip fracture aged = 80 years
Enlarge All figures

Further analysis showed that patients aged 65 to 79 years were also at less risk if they were treated in hospitals with orthogeriatric co-management (rate ratio for adjusted 30-day mortality risk: 0.86 [0.76; 0.96]). However, both the relative and the absolute risk reduction were lower than in patients aged ≥ 80 years (eTable 2a, b; eFigure 2).

Treatment of hip fracture patients in hospitals where orthogeriatric co-management was available was associated with considerably lower mortality. We also observed the lower mortality in subgroups: in both women and men, in different age groups, and in patients with and without care needs. In contrast, orthogeriatric co-management was of only marginal benefit for nursing home residents.

Our results confirm those of recently published observational studies using routine data from Australia, Denmark, and Italy, in which the reduction in mortality was even somewhat stronger (19–21).

The lower mortality amongst patients treated in hospitals with orthogeriatric co-management probably resulted from a number of different factors:

The lower daily mortality rates in hospitals with orthogeriatric co-management were limited to the first 6 weeks after hospital admission (Figure 2a). This suggests that the observed difference in mortality was caused by something that happened during this specific time window. The obvious difference between the two groups is the presence or absence of interdisciplinary care in hospitals with or without orthogeriatric co-management. We found no excess mortality later than 6 weeks in the group from hospitals with orthogeriatric co-management that had survived that long. In other words, the survival advantage from the first 6 weeks persisted beyond that time. We estimate that the attributable fraction accounts for about 30 avoided deaths per 1000 hip fractures.

The strengths of the study are the large dataset covering about one-third of all incident hip fractures in Germany in the study period, the exact documentation of the time at risk, and information about care needs and nursing home status on an individual basis. These data are fundamental to the reimbursement of, for example, complex early geriatric rehabilitation and are checked closely. A further strength are the robust findings, which were observed in a similar way in nearly all subgroups and even in younger and not necessarily geriatric patients.

Second, orthogeriatric co-management is still a new form of care in the German health system and several hospitals only began providing this type of care during our observation period. To exclude the influence of temporal trends, we categorized these hospitals as providing orthogeriatric co-management during the whole observation period. In both cases, we chose rather conservative forms of data analysis.

Third, selection bias from the exclusion of patients who changed treatment type cannot be completely excluded. Furthermore, it was not clear to us why the proportion of patients from nursing homes was higher in hospitals without orthogeriatric co-management. This imbalance, however, did not drive the results; on the contrary, the association between orthogeriatric co-management and mortality was more pronounced if residents from nursing homes were excluded.

To take account of potential confounders, we stratified analyses and adjusted for known risk factors such as age, sex, nursing home status, and time from hospital admission to surgery. As in all observational studies, however, residual confounders, e.g., socioeconomic status, cannot be excluded.

This work was supported by the German Federal Ministry of Education and Research within the consortium project Prevention and Rehabilitation of Osteoporotic Fractures in Disadvantaged Populations 2 (PROFinD 2) (grant no. 01EC1404A).

Because this study comprised analysis of anonymized routine data, it was not considered necessary to request approval from the ethics committee of the University of Ulm.

Prof. Becker has received consultancy payments from Lilly and lecture fees from Amgen, Pfizer, and Nutricia. He has received study support (third-party funding) for Mobilise-D, a project of the European Innovative Medicine Initiative (IMI) that is partly supported by pharmaceutical and technology companies.

Prof. Liener has received consultancy payments from Lilly and lecture fees from Amgen.

Prof. Hartwig has received consultancy payments and lecture fees from Amgen and Lilly, as well as reimbursement of congress registration fees and travel costs from Amgen. 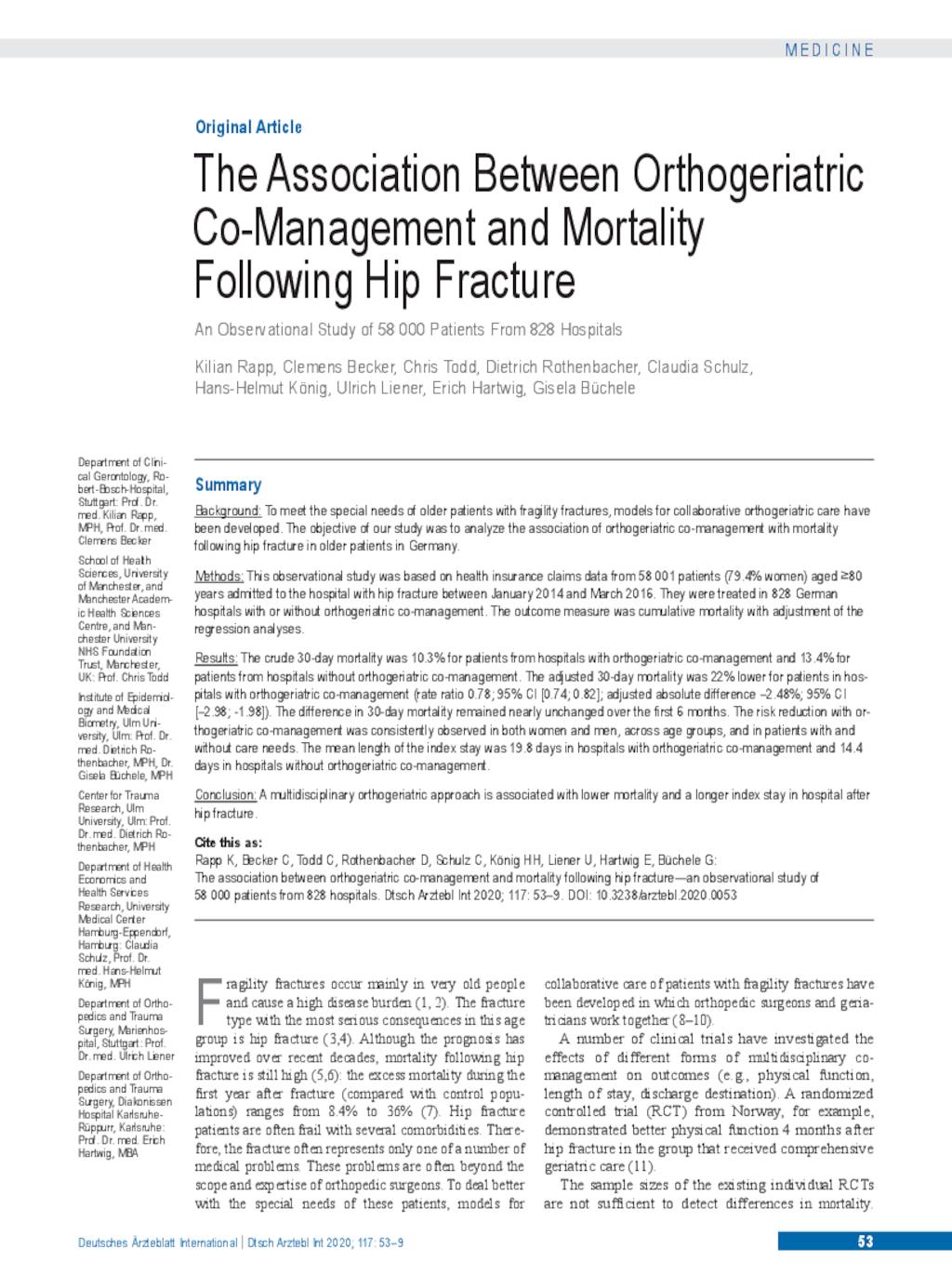