Background: The percentage of organ donors among the German population is very low, and the supply of organs does not meet the demand. Relatively few organ explantations are performed in Germany, compared to other countries. The central element leading up to organ explantation is the donor’s consent. This can be expressed either orally or in writing, in the form of an advance directive or organ donor card. The goal of this study was to find out how many patients in hospital resuscitation rooms had organ donor cards on their person.

Methods: The study population encompassed all 2044 patients treated in the trauma surgery resuscitation room at the Essen University Hospital from 1 February 2017 to 31 March 2019. The data were retrieved from protocols of patient possessions made on admission. The measures taken to enhance data quality were sensitization of the documenting nursing staff and documentation by the first author himself. The literature led us to expect a card-carrier rate of 36%.

Results: Over the entire period of the study, 17 organ donor cards were found (0.8%; 95% confidence interval, [0.5; 1.3]). The figures in all patient subgroups were markedly below the expected 36%. The low rate of carrying organ donor cards could not be explained by a poor quality of documentation.

Conclusion: The organ donor card system as it currently exists in Germany is inadequate. These cards are not carried in the emergency situations for which they were developed.

For some patients living with diseases that cannot be cured, organ transplantation is the only treatment option available in the long term (1). Despite ongoing research into other therapeutic approaches, such as organ replacement technologies, donated organs are still required for many of these patients (2).

As of 31 December 2018, 9407 patients were on the active organ transplant waiting list in Germany; altogether 14 135 patients were waiting for organs to become available for transplantation in all Eurotransplant member states. In 2018, 1183 patients waiting for an organ were taken off the active waiting list in Germany. These patients had died or were no longer eligible for transplantation. According to the Eurotransplant International Foundation, this applied to 1896 patients in all Eurotransplant member states (3). In Germany, there were only 955 organ donors in 2018, compared to 1296 organ donors in 2010. However, this was still more than the 797 deceased organ donors recorded in 2017 when the organ donor numbers reached their nadir (4). The low rate of posthumous organ donation is associated with deficits in the identification and reporting of potential organ donors by the hospitals responsible for organ procurement. With optimum identification and reporting of potential donors, it would have been possible to triple the numbers of organ donations in 2015 (5). In the international organ procurement statistics, Germany ranks at the bottom of the list in terms of organ procurements per million inhabitants. For example, in Spain 46.9 organs were procured from deceased donors per million inhabitants in 2017; with 9.7 organ procurements per million inhabitants, Germany lagged far behind (6). This low rate of organ procurements in Germany is in stark contrast to the results of a survey conducted by the German Federal Center for Health Education where 84% of the respondents stated that they have a positive attitude towards organ donation and 41% stated that they would agree to have an organ removed after their death (7). However, only 36% of the respondents reported that their decision about organ donation had been documented on an organ donor card (7). Eleven years earlier, a survey among civil servants of the German city of Essen found an even lower rate of only 20% of organ donor card holders (8).

The reasons for the low organ donor rates are complex and not fully understood. In 2018, 67% of all persons identified as possible organ donors actually became organ donors; in 24% of cases, organs could not be harvested because the family of the deceased organ donor did not give their consent. In addition, organ procurement was prevented by medical factors (e.g. cardiac arrest) and other circumstances (e.g. body not released by public prosecutor) in 7% and 2% of cases, respectively (4). Potential organ donors fulfil all medical requirements for organ donation; essentially, only the consent to organ procurement is missing. It is common that organ donation is refused by family member, although 90% of relatives do not know the deceased’s attitude towards organ procurement (9).

Therefore, it is crucial to find out about the consent of potential organ donors (e.g. patients with primary brain damage) early in the course of treatment. One possibility to document this consent is an organ donor card. Therefore, this study looked for organ donor cards which patients in the trauma surgery resuscitation room of the University Hospital Essen carried with them. According to the German Federal Center for Health Education (Bundeszentrale für gesundheitliche Aufklärung, BZgA), 36% of survey respondents stated in 2018 that they had an organ donor card. This rate served as a reference for comparisons in this study.

This study is based on data (age, sex, organ donor card) obtained from the records of patient belongings (“valuables record”) of all trauma surgery resuscitation room patients of the University Hospital Essen between 1 February 2017 and 31 March 2019. The standard procedure is to create a paper-based valuables record for each patient treated in the resuscitation room. The data extracted from these records were documented electronically and analyzed using the SPSS statistical software package. The collection of anonymized data was regarded as presenting no concern and approved by the ethics committee.

Altogether, the valuables records of 2326 resuscitation room patients created during a period of 28 months were analyzed. Since the consent to organ and tissue procurement documented on an organ donor card is only legally valid if the person is 16 years or older, patients younger than 16 years or of unknown age were excluded (10). Consequently, the total study sample on which the analyses are based consists of 2044 included resuscitation room patients.

Initial data collection started in July 2018. Valuables records were screened retrospectively over a period of 18 months up to 1 February 2017. It became quickly apparent that the rates of documented organ donor cards fell far short of the expected rates. We therefore decided to create a second patient sample in order to rule out that poor documentation quality was responsible for this finding. For a period of 8 months, starting 1 August 2018, the nursing staff of the trauma surgery emergency department was asked to pay special attention to organ donor cards and to document these in the valuables records. In collaboration with the director of the nursing staff of the trauma surgery emergency department, this request was communicated in three ways:

The prospective study sample was obtained over a period of 8 months. While data from the second, prospective sample were collected, a minor, but not the expected increase in the rates of documented organ donor card carriers was noted. In order to rule out incomplete documentation by the nursing staff, it was then decided to create a third patient sample in which the valuables records were to be completed by the first author of this study. The aim of this approach was to improve documentation quality by excluding that the documentation by the nursing staff had been incomplete in the first two patient samples. It was decided to collect data from this third sample from 1 March 2019 to 31 March 2019 between 7 am and 5 pm on workdays. Cases documented during this period outside of these hours were allocated to the prospective second sample. Table 1 shows the characteristics of the three patient samples.

It can be assumed that organ donor cards are carried along in a wallet or purse or similar personal effects or at least are to be found together with, for example, the patient’s driver‘s license, identity card and other chip cards. For this study it is of interest to know whether patients left their wallet or similar accessories (hereinafter referred to as “wallet”) at home or whether these were seized by the police or handed over to family members. In persons not having a wallet on them, it is very likely that no organ donor card will be found even if they are organ donor card holders. Therefore, it is advisable to create a subgroup of the total study sample based on the presence of a wallet. Given the heterogeneity of the terms, the presence of a purse, driver’s license, identity card, EC card, credit card, or health insurance card was used as a surrogate marker for the presence of a wallet with typical content. In patients carrying 2 or more of these items with them, it was assumed that this was a wallet with typical content (group 1). The presence of only one of these items was categorized in a medium category (group 2), and the absence of any of these items was considered equivalent to the absence of a wallet (group 3). In group 1, it can be assumed that in persons carrying an organ donor card in their wallet this would have been found. However, this does not apply to patients in group 2 and group 3. It is possible that a wallet handed over to family members or the police contained an organ donor card.

Table 1 shows that the number of organ donor cards detected increased following the start of the prospective part of the study in early October 2018. This finding indicates that the increased attention paid by the nursing staff to the presence of an organ donor card led to an increased detection and documentation of these cards.

The rates of persons carrying an organ donor card are extremely low and well below the expected rates. Even though training of the nursing staff was effective and resulted in significant increases compared to the previous study sample, this approach did also not achieve satisfactory organ donor card carrier rates. Card documentation by the first author in the interventional sample showed that incomplete documentation by the nursing staff was unlikely.

Furthermore, it was demonstrated that carrying an organ donor card was associated with carrying a wallet. Many resuscitation room patients, however, are admitted without wallet. But even in the group of patients highly likely to carry a wallet, the organ donor card prevalence was extremely low with an upper limit of the 95% confidence interval of 3.5%.

Our study was not designed as a multicenter study and the hit rate was low, but the patient sample was very heterogeneous. Although confounding is therefore unlikely, it appears advisable to repeat this study at other sites. Despite the fact that the period of documentation by the first author was very short, it was long enough to rule out incomplete documentation by the nursing staff.

In its present form, the system of organ donor cards in trauma surgical emergency patients is capable of improvement and rather ineffective. Essentially, resuscitation room patients are precisely the patient population organ donor cards are intended for: persons with an increased likelihood of death from traumatic brain injury, potentially no longer able to express their will. This study, however, showed that in exactly these cases the prevalence of carrying an organ donor card was extremely low.

It was not the aim of this study to discuss the consequences of a missing organ donor card in resuscitation room patients. It is, however, conceivable that in the further clinical course, the absence of this document may result in lower consent rates among potential organ donors. This, again, could result in a lower organ procurement rate.

Since people rarely carry this card with them, the current version of the German organ donor card is of little use. Public awareness campaigns could help to promote the need to carry an organ donor card at all times. One possible alternative to the documentation of the personal attitude towards organ donation on a card is an online database. It would allow all citizens to document their consent (or refusal) online and eliminate the need to carry a donor card; treating doctors could easily access this information at any time. In addition, an opt-out solution could be discussed in this context.

Conflict of interest
Prof. Jöckel is Chairman of the Board of the University Medicine Essen Foundation (“Stiftung Universitätsmedizin Essen“) which operates the “Initiative Stiftung Über Leben”.

The remaining authors declare no conflict of interest. 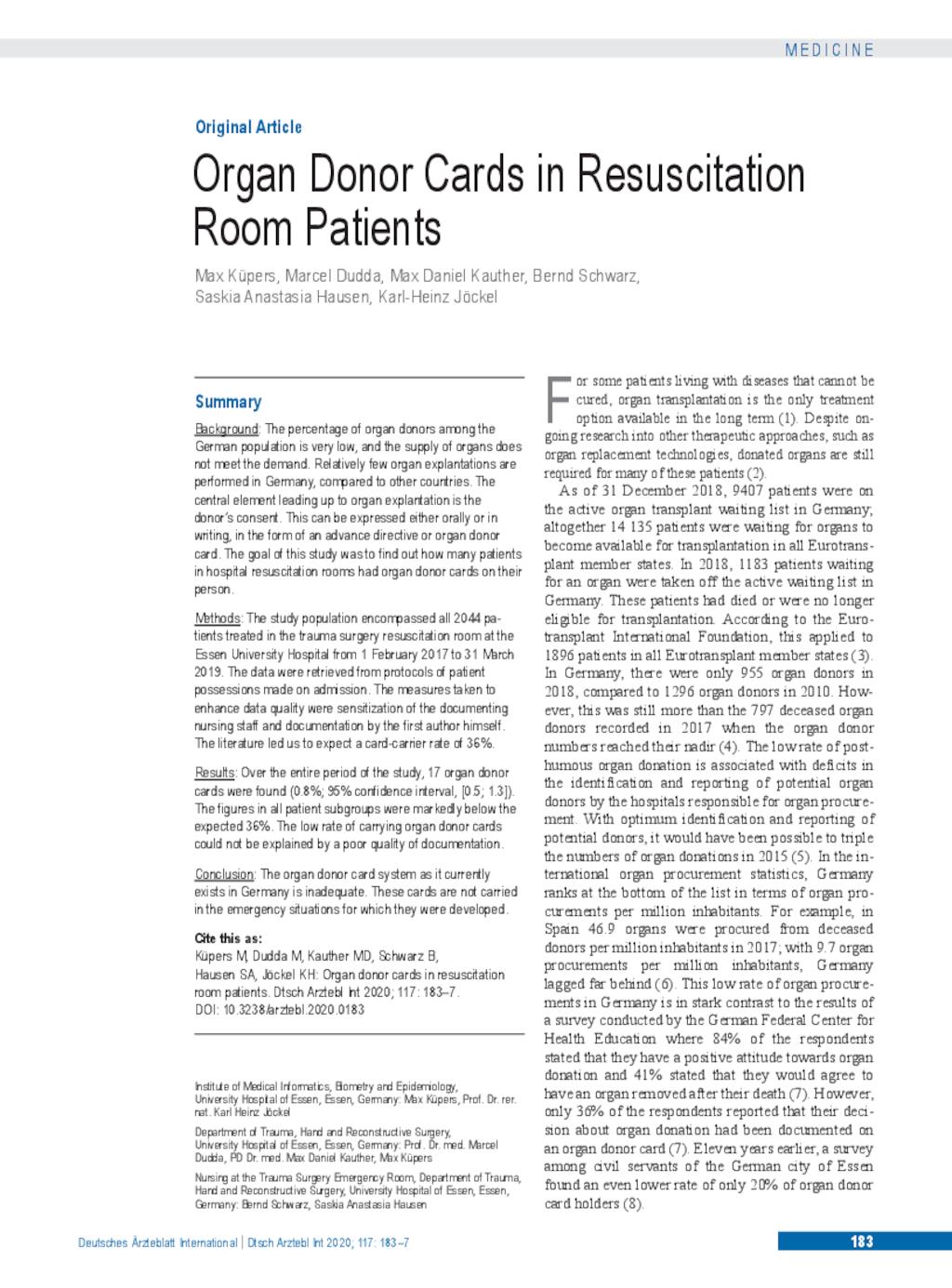