In our current study using data from the German Study on Tobacco Use (DEBRA), we reported that in Germany, e-cigarettes are currently the most common smoking cessation aid, initiated by smokers themselves (1). In order to weight up the opportunities and risks of e-cigarettes for tobacco cessation, it is important to distinguish tobacco smoke from nicotine in traditional cigarettes.

Tobacco smoke contains some 5000 chemicals, of which at least 98% have carcinogenic, cardiovascular, or respiratory effects. Tobacco smoke harms almost every organ in the human body and is the biggest avoidable risk factor for a multitude of disorders, which may result in reduced quality of life and premature death. The nicotine in tobacco is primarily responsible for the development of dependency and withdrawal symptoms, but compared with tobacco smoke it has a relatively low potential for causing harm. A clinical study of more than 3000 patients with chronic obstructive pulmonary disease, for example, did not find any association between the use of nicotine replacement therapy over a time period of up to five years and cardiovascular disorders or other serious events (2).

The aim of smoking cessation is primarily to stop tobacco consumption and the associated inhalation of tobacco smoke completely and permanently. Unfortunately, tobacco abstinence is extremely difficult because nicotine is so addictive. Pharmacological treatments aim to alleviate symptoms that arise primarily as a result of nicotine withdrawal and thus help to prevent a relapse. This is also the approach of nicotine replacement therapy, an established support method whose efficacy has been confirmed in more than 130 clinical studies in more than 64 000 smokers.

In principle, e-cigarettes resemble nicotine replacement therapy: the nicotine in the tobacco cigarette is substituted without the harmful adverse effects of tobacco smoke. The difference to nicotine replacement therapy—which is based mainly on patches, chewing gum, or nicotine mouth spray—is that the amplifier effect of nicotine intake is largely retained and that the method of nicotine administration is not uncoupled from the effect of the nicotine. Furthermore, e-cigarettes are by no means risk-free, but several orders of magnitude less harmful than tobacco smoke (3). Many studies from different countries have shown—in the same way as our recent study from Germany (1)—that e-cigarettes are popular among smokers as a smoking cessation aid. Our data also show that half of the smokers in Germany who use e-cigarettes as cessation aids use liquids not containing nicotine (1).

The first randomized controlled trials of the efficacy and safety of e-cigarettes in tobacco cessation showed that e-cigarettes compared with placebo can increase tobacco abstinence in the long term without causing serious adverse effects were seen in the study period. In the latest and so far largest study, e-cigarettes were even superior to nicotine replacement therapy in terms of abstinence from tobacco products. But this study also showed that a large proportion of consumers still used these e-cigarettes one year on.

Conflict of interest statement
Prof Kotz is the elected representative of the German College of General Practitioners and Family Physicians involved in updating the S3 clinical practice guideline “Screening, Diagnostics, and Treatment of Harmful and Addictive Tobacco Use”

Prof Batra has received funding from Pfizer into a third-party account. He is a behavioral therapist and has developed his own tobacco withdrawal program (“non-smoker in 6 weeks”). He is the coordinator and director of the named S3 guideline “Screening, Diagnostics, and Treatment of Harmful and Addictive Tobacco Use” (AWMF registry No 076–006).

Dr. Kastaun declares that no conflict of interest exists. 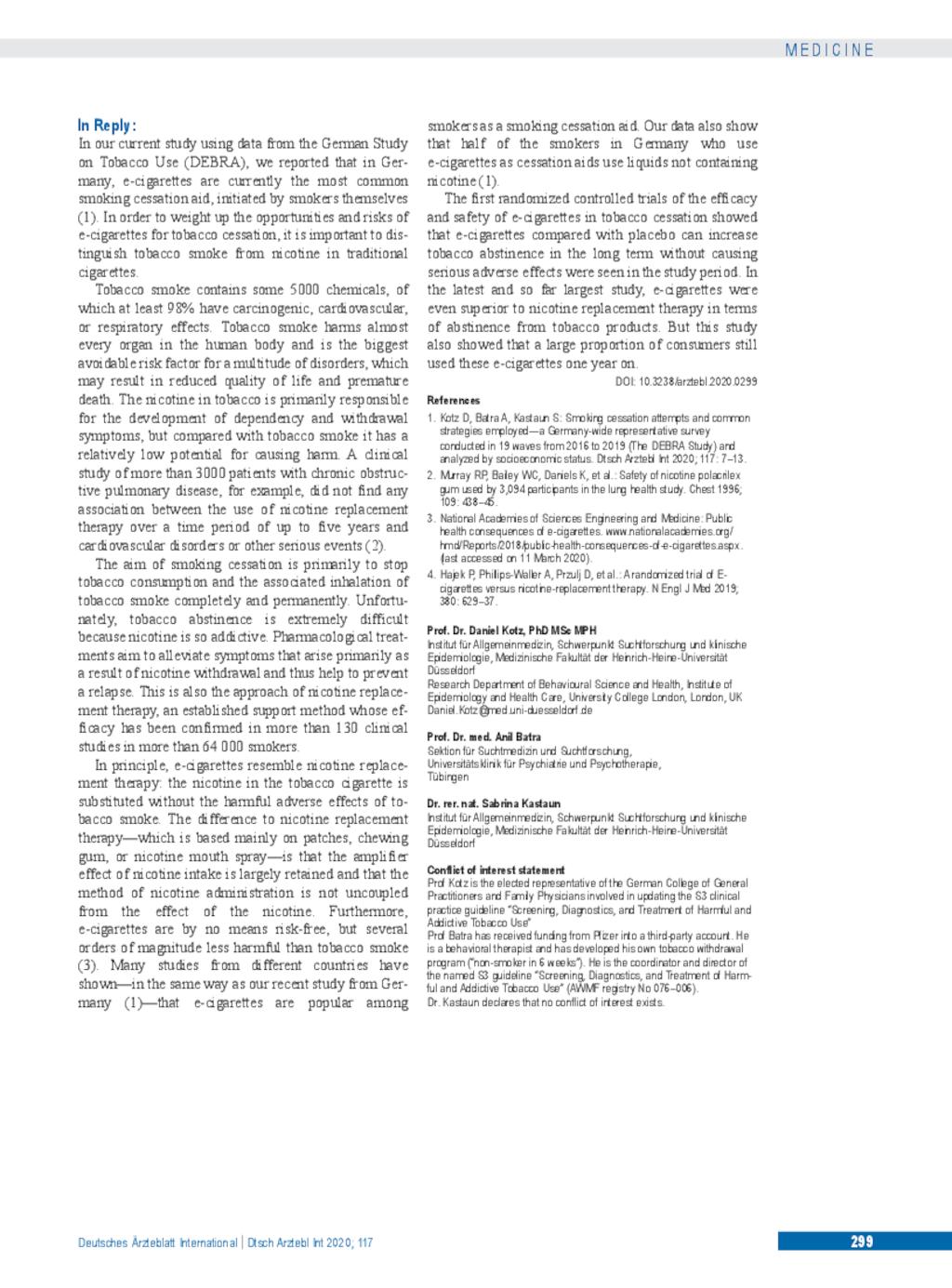