A comparison between vitamin K antagonists and direct oral anticoagulants

My aunt, who had to take anticoagulants, died from a brain hemorrhage—should I still . . .?” This reaction, which all doctors will have heard in some shape or form when they advise a patient to take oral anticoagulants for the long term, articulates patients’ fear of hemorrhage as a relevant adverse effect of this treatment. Indeed, the fear is justified as has been shown by data from clinical studies of the effectiveness and rates of adverse effects of anticoagulant treatment using vitamin K antagonists (VKAs) or direct oral coagulants (DOACs) (1, 2, 3, 4). Although especially the rate of intracranial hemorrhages, a high percentage of which result in lasting physical disabilities or even death, is notably lower for the new DOACs than for treatment using VKAs, the long term use of DOACs has also been associated with instances of life-threatening or fatal hemorrhage (5).

The increased risk of hemorrhage is counterbalanced by the undisputed benefit of long term anticoagulant treatment. In patients with atrial fibrillation, it was possible to drastically reduce the rate of cardiogenic thromboembolism—which without anticoagulant prophylaxis is responsible for 20–30% of all ischemic cerebral infarctions (6). In order to balance this clearly confirmed therapeutic benefit of anticoagulant long-term treatment on the one hand with the therapy-associated risk of hemorrhage on the other hand on an individual basis, information on the clinical course after a hemorrhage has occurred and on the effectiveness of possible therapeutic approaches are of great relevance.

Lindhoff-Last and co-authors showed in their registry study (7) over a period of almost four years the clinical course and therapeutic approaches in 193 patients who developed a hemorrhage that required treatment during therapy with vitamin K antagonists (n=97) or a DOAC (n=96). Using the bleeding event as the primary inclusion criterion makes this registry study representative for patients with anticoagulant related hemorrhages. This approach distinguished this study from clinical registration trials, which exclude patients at higher risk for a bleeding event. The 30-day death rates of 17.5% in the VKA group and 8.3% in the DOAC group confirm the high risk of anticoagulant-induced hemorrhage. The omission of a more detailed evaluation of individual risk factors for the bleeding events that occurred is a limitation of this otherwise methodologically sound study.

In evaluating the effectiveness of different antidote strategies, the authors presented only data on prothrombin complex concentrates (PCCs). This is a consequence of the recruitment period 2014–18, when the specific antidotes idarucizumab and andexanet alfa were not yet available or to a limited degree only. The mean bleeding times in the VKA group were clearly reduced by administration of PCC, those in the DOAC group slightly, but the high death rates in both groups underline once more the importance of the initial bleeding event itself for patient outcomes. In this way the study results reinforce once more the high importance of individual assessment of a patient’s bleeding risk before starting long-term treatment with oral anticoagulants. 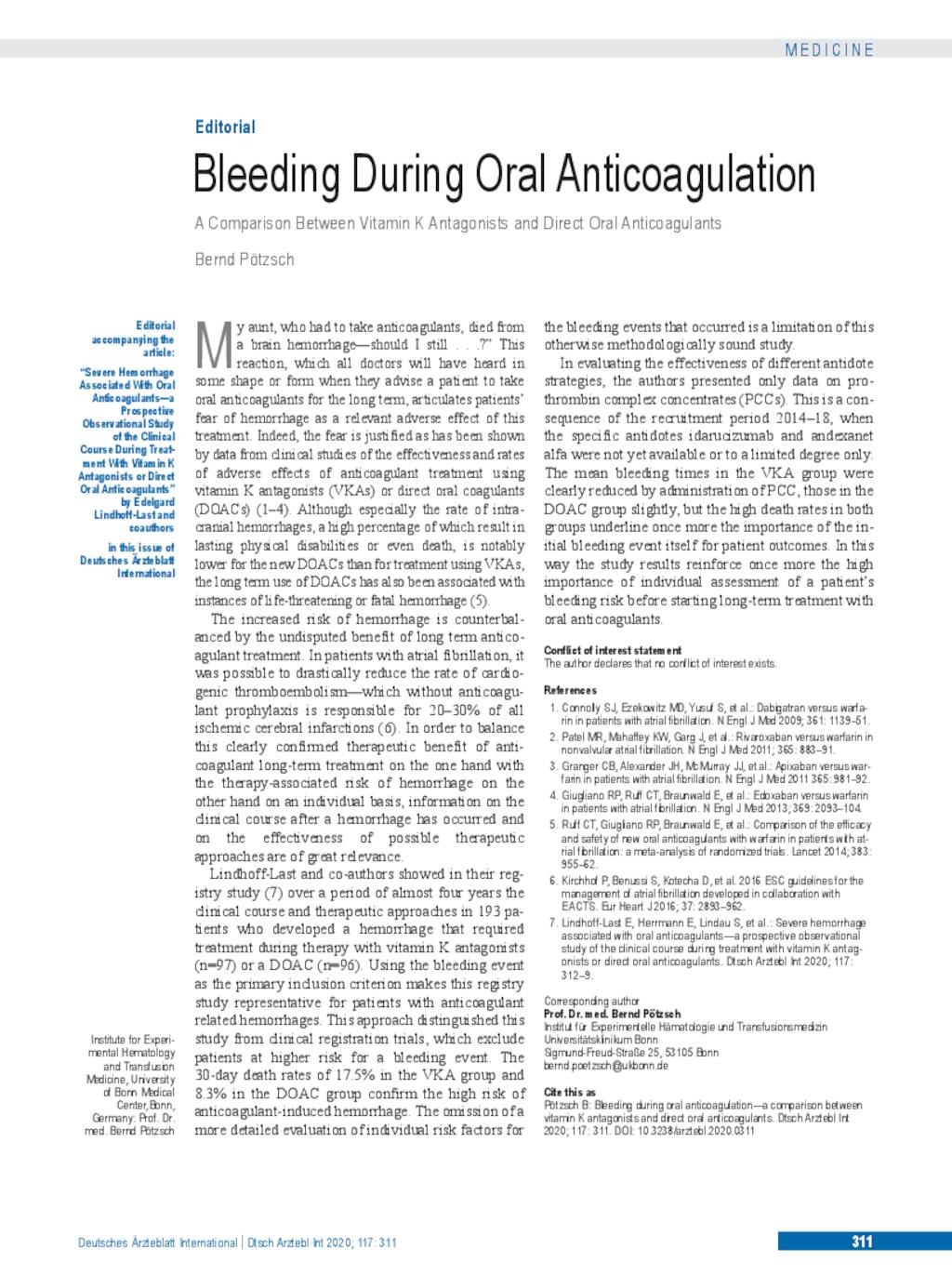