Background: Few data have been published to date on outcomes after the common clinical experience of severe hemorrhage in orally anticoagulated patients.

Methods: A prospective, multicenter observational study was carried out to investigate outcomes and management in a series of consecutive patients who sustained a severe hemorrhage under treatment with vitamin K antagonists (VKA) or direct oral anticoagulant drugs (DOAC). The primary endpoint was in-hospital death up to and including day 30 after hospital admission. The secondary endpoints were the duration of bleeding, in-hospital death due to hemorrhage (as defined by the study physician examining the patient’s records), the use of antagonists, the extent of supportive measures used to stop the hemorrhage, and an assessment of causality. Consecutive patients were recruited until a predefined number of patients was reached in both groups.

Patients with nonvalvular atrial fibrillation or venous thromboembolism require anticoagulation with a vitamin K antagonists (VKA) or direct oral anticoagulant (DOAC) in therapeutic doses (1, 2, 3, 4, 5). Meta-analyses of Phase III studies found that the efficacy of DOACs in preventing stroke or recurrent venous thrombosis was comparable to that of VKAs. Intracranial hemorrhage, fatal hemorrhage and clinically relevant non-severe hemorrhage occurred significantly less frequently in DOAC-treated patients compared to VKA-treated patients, while gastrointestinal hemorrhage was more commonly observed among patients treated with rivaroxaban, edoxaban and dabigatran compared to VKA-treated patients (6, 7). Since the conduct of the pivotal studies retrospective or single-arm prospective registries on the management and outcome of severe hemorrhage have been published, showing differences in the outcomes of patients treated with DOAC versus VKA (eTable 1, 8, 9, 10, 11, 12, 13, 14).

eTable 2
Characteristics of patients on inclusion in the registry: daily doses of DOAC-treated patients. ASA score
Enlarge All figures

eTable 3
Site of bleeding, summarized as “other bleeding sites“ in Table 2
Enlarge All figures

The management of major bleeding in patients on oral anticoagulation therapy is still challenging. Prothrombin complex concentrates (PCCs) are the antidote of choice for VKA-treated patients with severe hemorrhage. Even though specific antidotes are available, PCC is commonly used to treat severe hemorrhage in DOAC-treated patients, despite the limited evidence supporting the effectiveness of PCC in this patient population (8, 10, 11, 15, 16, 17).

There is a lack of prospective data comparing the management and outcomes in patients experiencing major bleeding during treatment with DOACs or VKAs in everyday clinical practice.

We therefore initiated the RADOA (Reversal Agent use in patients treated with Direct Oral Anticoagulants or vitamin K antagonists) registry project designed to evaluate the outcome and management of consecutive DOAC- or VKA-treated patients who were admitted to hospital with severe hemorrhages or conditions requiring urgent intervention. The registry also allows to analyze effective management strategies which can be used to control severe hemorrhage.

The RADOA registry is a prospective, observational, non-interventional, open-label, investigator-initiated multicenter German registry, documenting the management of severe hemorrhages and/or urgent interventions in patients treated with VKA or DOAC. The aims and design of this registry have already been described elsewhere (18).

The registry does not allow to calculate the prevalence rates for the various types of hemorrhage. Furthermore, comparisons between the various treatment groups (VKA vs. DOAC) are not confirmative but explorative; both noticed and unnoticed confounders may occur.

Patient recruitment continued until the predefined sample size was reached in each group. The clinical course and the outcome were prospectively documented up to and including day 30 after hospital admission. The participating centers were hospitals with interdisciplinary teams on-call 24/7 to treat anticoagulation-associated hemorrhage in their emergency departments and intensive care units. The study protocol was reviewed and approved by all relevant institutional ethics committees (IECs). An external independent monitor performed all checks (100%) of the source data on site.

Patients with major bleeding while receiving VKA or DOAC therapy were included in the registry. The modified definition of the International Society of Thrombosis and Haemostasis (ISTH) for non-surgical patients was used for hemorrhage classification (19) (definitions of major bleeding episodes in the eBox).The characteristics of the included patients are detailed in Table 1.

In 2014, the first patient was included in the registry. The majority of patients was recruited between January 2016 and March 2018.

Since the clinical condition studied represented a medical emergency, it had to be ensured that obtaining the informed consent of the patient for inclusion in the registry did not interfere with or delay the provision of acute care. Therefore, the patients’ written informed consent was only obtained after completion of acute treatment. This procedure was approved by all ethics committees. In patients who could not provide their written consent due to their poor state of health, the consent was obtained from their legal representative. Data of patients who were unconscious or died before a legal representative had been named were also included in the registry. This procedure was expressly approved by the ethics committees to prevent significant distortion of outcomes as the result of exclusion of the most severely affected patients. The study complies with the Declaration of Helsinki.

The primary endpoint was the in-hospital mortality up to and including day 30 after admission to hospital. The secondary endpoints were:

1. The time to the cessation of bleeding after hospital admission

2. The mortality associated with major bleeding

3. The use versus non-use of reversal agents with regard to the clinical outcome

4. The level of hemostasis with regard to supportive treatments

5. The efficacy of dialysis in patients treated with dabigatran, and

6. The causality of serious adverse events with regard to anticoagulants.

Hemostasis was considered achieved when the bleeding improved instantly, when the use of red blood cell transfusions, factor concentrates and/or antidotes was no longer required and/or when the local investigator documented that the bleeding had ceased completely (see definition of hemostasis in the eBox).

In patients with severe hemorrhage, sample-size estimation was based on the total length of the two-sided 95% confidence intervals for the incidence of the primary endpoint. These were estimated using the PASS software (NCSS, LLC. Kaysville, Utah, USA). For a sample size of 90 patients in each group (either VKA or DOAC), the total width of the confidence interval was 13.5%, assuming an incidence of the primary endpoint of approximately 10% or less. It was 12% if an endpoint incidence below 7.5% was assumed, ensuring acceptable accuracy.

The primary statistical aim was to evaluate in-hospital mortality up to and including day 30 after hospital admission with two-sided 95% confidence intervals, using the Clopper-Pearson method. All comparisons of the primary endpoint and secondary endpoints were explorative and were not adjusted for multiple testing.

The log-rank test was used to estimate and compare the cumulative incidence curves for the primary endpoint of in-hospital mortality. As a sensitivity analysis, the odds ratio (OR) of the Fisher‘s exact test was compared to the odds ratio of a multivariable logistic regression analysis, taking into account indication, sex and body weight as potential confounders.

The secondary endpoint of bleeding-associated mortality was characterized by 95% confidence intervals and compared between treatment groups. In addition, competing risk models as described by Aalen-Johansen were used with a two-sided Gray test to estimate and compare cumulative incidence curves for bleeding-associated deaths and deaths due to other causes were used as competing risks.

Additional secondary exploratory analyses are shown in the Tables 1–3. Dichotomous and categorical variables were described by number and proportions and compared using a two-sided Fisher‘s exact test. Furthermore, risk differences were described using 95% score confidence intervals. Continuous and ordinal variables were described using the median (1st to 3rd quartile) and compared using two-sided Mann–Whitney U tests or Kruskal-Wallis tests. As a sensitivity analysis, a stratified Mann-Whitney U test was used to compare bleeding duration in the various patient groups according to site of bleeding (intracranial, gastrointestinal or other anatomical sites). Statistical analysis was performed using the R software, version 3.5.0 (R: Foundation for Statistical Computing, Vienna, Austria).

The patients’ mean age was 79 years; the demographic characteristics of the two treatment groups were comparable with regard to age, sex, indication for anticoagulation, known renal disease, and severity of the condition (Table 1).

Figure 1
Cumulative incidence curves of hospital mortality up to and including day 30 after hospital admission (two-sided log-rank test taking into account the time to death: p = 0.053)
Enlarge All figures

5. None of the 4 patients treated with dabigatran received hemodialysis. Two patients received idarucizumab.

The second important insight from the RADOA registry was that PCC administration in DOAC-treated patients with major bleeding was associated with a 66% reduction in bleeding duration. Thanks to the RADOA registry, prospective data on the efficacy of PCC in this situation have become available for the first time.

The specific antidote for reversal of anticoagulation with factor Xa inhibitors, andexanet alpha, is not available in many hospitals. In contrast, PCC is available in a hospital setting (at least in Europe) and most clinicians are familiar with the use of PCC in patients experiencing major bleeding while receiving anticoagulation therapy. In addition, the cost of andexanet alfa may be too high for many hospitals.

We are well aware that the typical limitations of a non-randomized observational registry also apply to the RADOA registry. In everyday clinical routine, registry data can be influenced by variations in indications. In addition, it is the severity of the hemorrhage that determines whether or not an antidote is administered. Therefore, any attempt to compare different treatments could be challenged.

On the other hand, conducting randomized studies in patients with major bleeding while on oral anticoagulation is difficult and a placebo group as a comparator would be unacceptable from an ethical point of view in this life-threatening situation.

The results indicate that there is an urgent need for further research in this clinically relevant field. Well-designed randomized trials comparing andexanet alfa with PCC for the treatment of major hemorrhages in patients on DOAC therapy could help to improve patient care in this life-threatening situation in the future.

Prof. Lindhoff-Last received lecture fees and consulting fees from Bayer, Boehringer Ingelheim, Bristol-Myers Squibb/Pfizer, Daiichi-Sankyo, Portola, CSL Behring, and Aspen. She received external funds for the conduct of a clinical contract study from Bayer and DAIICHI Sankyo, for a research project which she initiated from Bayer AG, Bristol-Myers Squibb/Pfizer, Daiichi-Sankyo, and CSL-Behring.

Prof. Nowak-Goettl served as a paid consultant for Bayer Vital and Boehringer Ingelheim.

Prof. von Heymann served as a paid consultant for Daiichi Sankyo and Grünenthal. He received lecture fees and reimbursement of travel expenses from Bayer, Biotest, Bristol-Myers Squibb, CSL Behring, Daiichi Sankyo, Grünenthal, Leo Pharma, Mitsubishi Pharma, NovoNordisk, and Pfizer. In the conduct of a clinical contract study, he was responsible for external funds from Daiichi Sankyo.

Figure 1
Cumulative incidence curves of hospital mortality up to and including day 30 after hospital admission (two-sided log-rank test taking into account the time to death: p = 0.053)
Enlarge All figures

eTable 2
Characteristics of patients on inclusion in the registry: daily doses of DOAC-treated patients. ASA score
Enlarge All figures 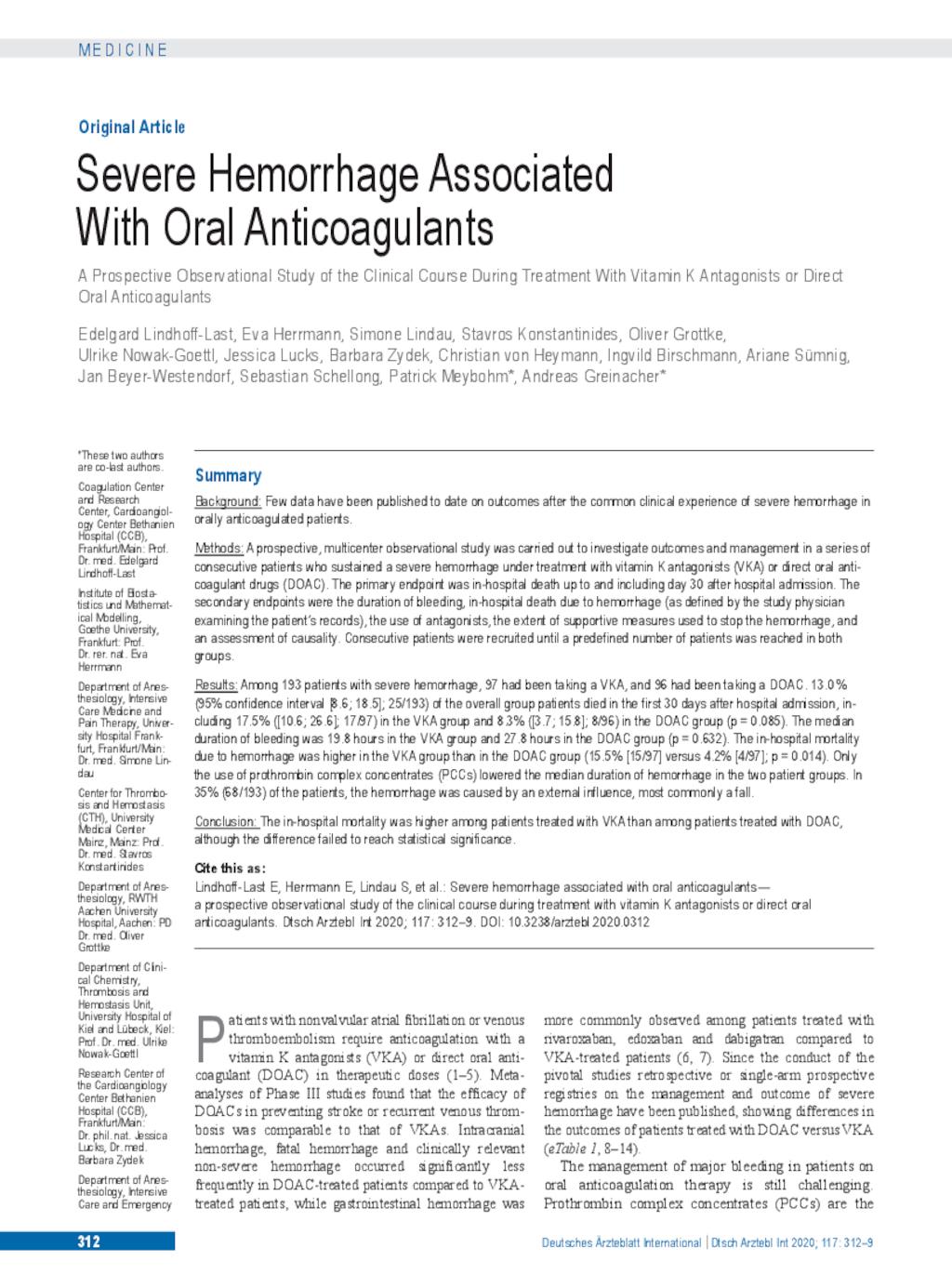