Hospital Admission in Children and Adolescents With COVID-19

SARS-CoV-2 infections in children are usually mild and are associated with a low rate of hospitalization and intensive care (1, 2). No data have yet become available on pediatric inpatients in Germany; however, such data are urgently needed for epidemiological modeling and better understanding of the disease in this age group.

The German Society for Pediatric Infectious Diseases (DGPI), supported by other professional associations, has been collecting the data of all children and adolescents admitted to hospital for treatment of COVID-19 since 18 March 2020. After confirmation of SARS-CoV-2 infection, the informed consent of a custodian is obtained and data on age, clinical symptoms, coinfections, comorbidities, treatment, and outcome are entered in the registry. The study plan was approved by the ethics committee of TU Dresden.

Data on 128 children and adolescents were collected from 66 hospitals between 18 March 2020 and 4 May 2020. Ninety-six (78%) had already been discharged. Sixteen patients (13%) required intensive care. Eighty-five pediatric hospitals actively reported that they had not yet treated any patients with COVID-19. An index patient was identified for 38% of the patients, and in 85% of these cases it was one of the parents (Tables 1 and 2).

Table 1
Pre-existing illnesses, treatments, and outcome of children and adolescents with COVID-19 admitted to hospital in Germany*
Enlarge All figures

A coinfection was present in 10% of cases: in three patients viral (respiratory syncytial virus [RSV], Epstein–Barr virus [EBV]) and in nine patients bacterial. Sixty-four patients (50%) were female. Forty-seven patients (37%) were infants, including 13 neonates (10%). Thirty-seven (29%) were 1 to 5 years old, 18 (14%) were schoolchildren up to 10 years old, 14 (11%) were aged 11 to 15 years, and 12 (9%) were over 15 years of age. The infants included three premature babies (born at 26–32 weeks of gestation), all of whom had no or only mild symptoms and did not need intensive treatment. Underlying diseases were present in 26% of the patients overall, but in 50% of those who received intensive care.

The most frequently occurring clinical symptoms were fever/general symptoms (67%), upper respiratory tract infection (41%), bronchitis/bronchiolitis (16%), and gastrointestinal symptoms (17%). Pneumonia occurred in only 15% of the patients, sepsis or sepsis-like clinical findings in 6%, encephalitis in 2%, and acute respiratory distress syndrome (ARDS) in another 2%. In 17% of cases no symptoms were documented. SARS-CoV-2 was found in the cerebrospinal fluid of one patient with encephalitis (without pleocytosis).

Invasive ventilation was necessary in 5% of cases. Extracorporeal membrane oxygenation (ECMO) was not needed in any of the patients. One single patient was given targeted antiviral treatment with hydroxychloroquine. The median length of hospital stay was 3 days (range 1 to 26 days).

A total of 9657 patients up to the age of 19 years with COVID-19 were registered in Germany up to 4 May 2020. The number of children and adolescents admitted to hospital in the DGPI survey seems low compared with the data of the Centers for Disease Control and Prevention (CDC) (2), which assume a hospitalization rate of 5.7–20% for pediatric patients—particularly since a relevant proportion were probably admitted for other reasons. Comparable, however, are the high proportion of infants, the frequently mild course of the disease, the preponderance of symptoms of upper respiratory tract infection, and the proportion of patients with pre-existing illnesses. The proportion of deaths (1/102 [Germany] versus 3/148 [USA]) is also similar.

In contrast to other epidemic viral respiratory infections, the primary source of infection with SARS-CoV-2 appears not to be other children. Most children in this study were infected by their parents; the CDC data (2) also indicate that 90% of children with COVID-19 contract the disease from household contacts. A study conducted in Iceland showed that child care facilities and schools were not the source of chains of infection (3). In a French study, adolescents infected only 10.9% of the members of their households during an outbreak of COVID-19 (4). This matches well with the report that the viral load is no higher in children than in adults (5). In Germany, our observation may have to do with the primary chains of infection, which in the first wave of infection arose predominantly from persons returning from high-risk regions, and also with the early closure of schools and child care facilities. Important policy decisions on health and social matters are currently being made using assumptions based on the epidemiology of, for example, influenza, where children represent a significant reservoir for infection of adults. As yet, there are no valid data that confirm or even suggest this to be the case for the transmission of SARS-CoV-2.

It is also striking that the proportion of children and adolescents remained constant at around 3% during the first few weeks of the spread of SARS-CoV-2 in Germany, although this age group makes up 13% of the population. Whether this arises from less testing in young people or genuinely results from a lower infection rate may first emerge from serology studies.

This first evaluation of the DGPI survey features limitations. Although the participation of almost 50% of the pediatric departments in Germany is impressive, reporting bias (including the preferential documentation of particularly severe cases) cannot be excluded. Furthermore, the indications for testing are not uniform. The number of cases is still too small to permit generally valid conclusions. However, the number of cases documented is rising rapidly week by week, so robust epidemiological data on children and adolescents with COVID-19 admitted to hospital in Germany can be expected to become available in the foreseeable future.

Table 1
Pre-existing illnesses, treatments, and outcome of children and adolescents with COVID-19 admitted to hospital in Germany*
Enlarge All figures 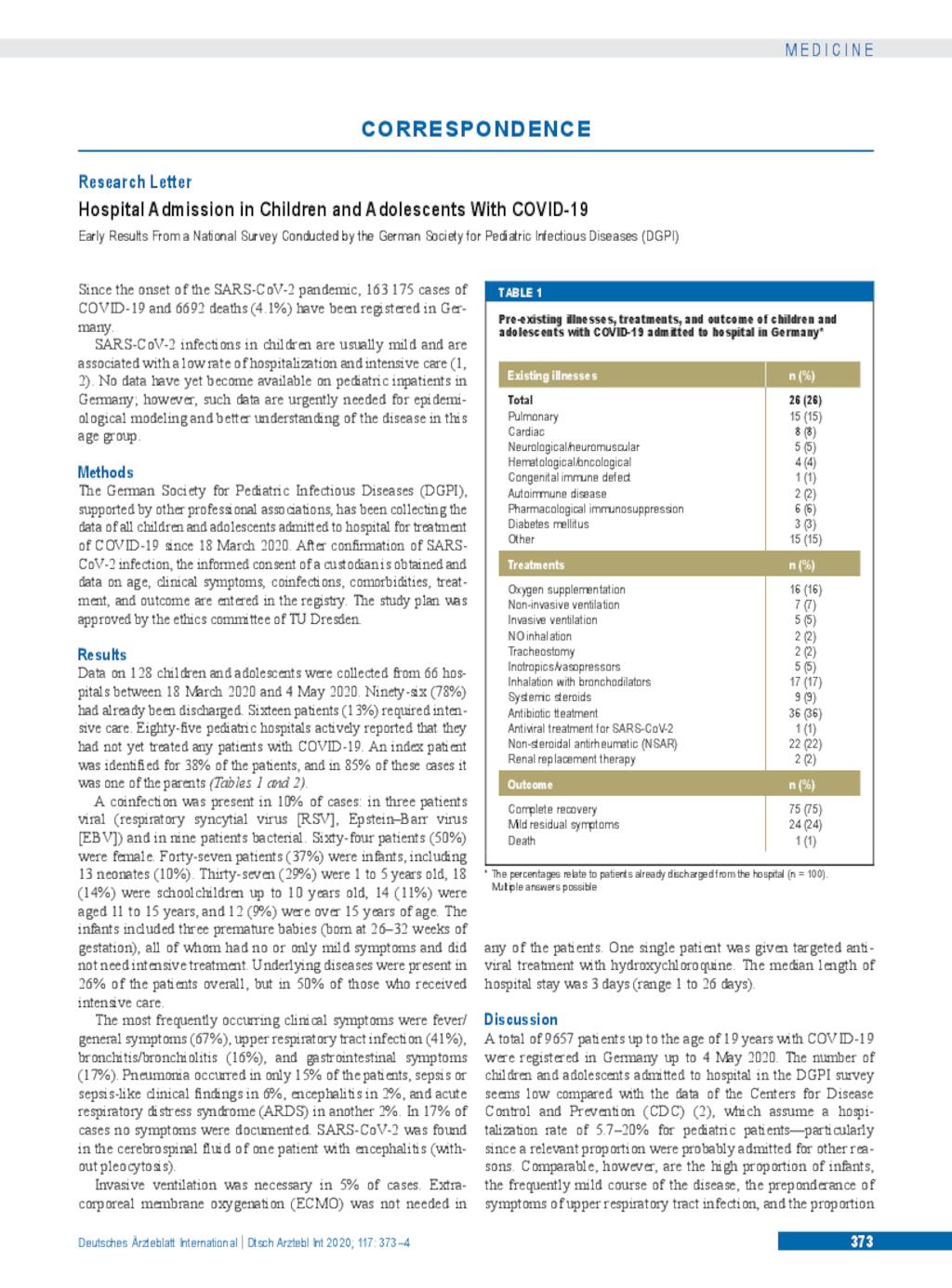