The Prevalence and Effects of Stalking

Background: In 2003, we carried out the first epidemiological study on the frequency and effects of stalking in Germany that was based on a random population sample. We repeated the study with the same design in 2018 in order to assess any potential alterations over time in the frequency of stalking and of psychological problems in the affected persons. As far as we know, this is the first replication study of this kind to be carried out anywhere.

Methods: 1000 women and 1000 men were randomly chosen from the residents’ registration data of Mannheim, Germany. Each one of them received, by mail, a comprehensive questionnaire about stalking, as well as the WHO-5 Well-Being Index and the German version of the Patient Health Questionnaire (PHQ-D).

Conclusion: Stalking remains a major problem that must be taken seriously. Physicians and psychologists should be well informed about it in order to help affected persons who turn to them for medical and psychological assistance.

The word “stalking,” adopted from hunting terminology, was first used in the USA in the 1990s to describe a complex pattern of behavior. Some years later, soon after the turn of the century, stalking came to be perceived as a meaningful problem for the healthcare system in Germany. Legislation followed in 2007; stalkers can be prosecuted under § 238 of the German Criminal Code. Stalking presents physicians and psychologists with many challenges, e.g., in the counseling and treatment of the victims of stalking and the diagnosis and therapy of stalkers (1). Medical/psychological expertise is also of great importance in assessing the risk of violent escalation of stalking behavior. It is not at all uncommon (>70% of cases, according to [2]) for persons who kill an intimate partner to have previously come to attention for stalking their future victim, and the homicide risk in this context is particularly high for rejected stalkers (3). Notably, physicians and psychologists are themselves at higher risk of stalking than the general population in their working life and should be in possession of the skills to enable them to react professionally in such situations (4).

Owing to differences in definition, sampling, and survey methods, together with considerable uncertainty about how many cases go unreported, data on the prevalence of stalking vary widely (5). However, all epidemiological studies are in agreement that stalking is a widespread phenomenon and that women are stalked much more frequently than men (5–10; Table 1). A particular problem is presented by violent behavior in the context of stalking (11). The results of a systematic literature review suggest that the lifetime prevalence of experiencing stalking ranges between 8% and 25% (12). In Germany, a recent representative study of unreported stalking in the age group 16 to 40 years found a stalking prevalence of 15% (13).

Stalking is a potentially traumatic experience. The victims of stalking have an elevated risk of mental illness (15). A number of studies have reported a high prevalence of depressive disorders and post-traumatic stress disorder, although they come to no general conclusions on the relevance of the type and duration of stalking in this respect (16, 17, 18, 19, 20). Stalking often escalates to involve sexual and physical violence, and may in isolated cases be a risk factor for homicide (21). The economic consequences of stalking are considerable, including loss of productivity owing to time off work, treatment costs in the healthcare system, and legal costs (22). It should be noted, however, that the cited studies merely show associations, not causality, while any calculations of consequent costs rest on the assumption of a causal connection.

In this study we set out to compare the prevalence and effects of stalking in a German population sample from 2018 with our own results from 2003. To our knowledge, no previous study anywhere in the world has explored these parameters over an extended period of time with exactly the same study design. Longitudinal investigation is important, for instance, in assessing the efficacy of the measures that have increasingly been introduced in recent years, in Germany and elsewhere, to combat stalking. The following questions were of particular interest:

In October 2018, we selected 1000 women and 1000 men between the ages of 18 and 65 years at random from the residents’ registration data of the city of Mannheim. Each of these persons was sent a comprehensive questionnaire on the topic of stalking (23), together with the WHO-5 Well-Being Index (24, 25), the German version of the Patient Health Questionnaire (PHQ-D) (26, 27), and a letter explaining the goals of the study. The methods are described in detail in the eMethods supplement. For the purposes of this study, stalking had taken place if there had been multiple episodes of harassment or unwanted contact featuring multiple behavior patterns over a period of at least 2 weeks that made the victim anxious or fearful.

The principal findings of the comparisons between the data from 2003 and 2018 are presented in Table 2.

After adjustment for double selection and undeliverable questionnaires, letters and questionnaires were sent to 1985 contactable persons in 2003 and 1930 persons in 2018. The response rate in 2018 was, at 23.0%, much lower than in 2003 (34.2%). With regard to the representativeness of the samples, there was no statistically significant difference between the percentage age distribution of the population of Mannheim and the study sample of persons born between 1953 and 2000. In both 2003 (58.9%) and 2018 (64.1%), women were somewhat overrepresented in the study sample relative to the population as a whole. The two samples did not differ significantly in average age or in sex distribution.

The relevance of the stalking behavior patterns recorded here is underlined by the finding that explicit threats were uttered in 54% of cases in 2003 and 66% in 2018. The overall proportion of cases involving physical and/or sexual violence is similar in the two surveys (over 50% in each case) (Table 2).

With regard to their current mental wellbeing, in both 2003 and 2018 the victims of stalking showed statistically significantly lower levels of wellbeing (WHO-5) and statistically significantly higher levels of anxiety and depression, even after adjustment for sociodemographic variables (PHQ-D; all p-values ≤ 0.001[Table 3]). Stalking victims also differed at diagnostic level, in both 2003 and 2018, from those who had not been stalked: In 2003 the criteria for a diagnosis of at least one psychiatric disorder were fulfilled by 50% of the victims but only 22.5% of the non-victims; in 2018 the figures were 46.5% and 24.4%, respectively (Table 3). However, the mental wellbeing of stalking victims did not differ between 2003 and 2018 (Table 2).

Supplementary analyses showed that longer duration and greater frequency of stalking events were both, independent of each other, associated with higher PHQ-D depression scores (p-values ≤ 0.05 [eBox]).

To our knowledge, this study is the first population-based replication study on the frequency and effects of stalking. The same study design was used to investigate this topic in both 2003 (14) and 2018, enabling description of any changes in the findings. Awareness of stalking has increased greatly since 2003. The police and courts, for example, have changed how they deal with stalking: the specific offense of stalking was added to the German Criminal Code in 2007. In addition, specialized counseling centers for victims of stalking have been opened.

This replication study was intended to answer questions of scientific and practical interest: Has the prevalence of stalking changed in the past 15 years? Has the health status of victims of stalking improved? Do they think the police and courts currently have sufficient powers?

First, however, the limitations of the study should be mentioned: The response rate, although satisfactory for surveys of this type on each occasion, was much lower in 2018 than in 2003. This reflects a general international trend towards lower response rates in social science studies (28). With regard to the age distribution, both samples were largely representative, but in both cases more women than men took part. A further limitation is the fact that the samples were drawn from the population of a fairly large western German city, which, like the low response rate, restricts the generalizability of our findings. However, the prevalence closely matched the findings of studies from other countries. Furthermore, the cross-sectional nature of the survey means that no causal connection between stalking and mental health can be concluded. For example, it cannot be excluded that some of the identified stalking victims were suffering psychic stress beforehand, and persons with psychic stress are at elevated risk of becoming victims of stalking (29). Moreover, such individuals may have a lower threshold for perceiving events as threatening and reacting with anxiety. Clear conclusions can be reached only by means of longitudinal studies, which can explore to what extent the risk of mental disorders is increased by stalking among persons whose mental health is initially good. A longitudinal study of this kind by Diette et al. (30) integrated data sets on girls and women from three large studies from the USA. The authors showed that from the age of 18 years onward, becoming a victim of stalking increased the risk of later mental disorders by a factor of 2.7–3.9. However, our study’s disadvantage of being a cross-sectional survey of stalking experience and mental wellbeing is shared by the vast majority of published research. Longitudinal studies need very large data sets to be able to investigate the incidence of mental disorders prospectively. This necessarily involves dispensing with precise analysis of the characteristics of stalking and the victims’ reactions, which we were able to accomplish.

The results of our replication study support the assumption that stalking remains an important problem in Germany. The lifetime prevalence of stalking in the 2018 sample was 10.8%, close to the figure of 11.6% in 2003. The prevalence of stalking has therefore hardly decreased over a 15-year period, although the powers of the police and the criminal justice system against stalkers have been strengthened. The sex distribution of both perpetrators and victims of stalking has also changed very little, and so-called (ex-)partner stalking remains the main problem. We found no grounds for the plausible assumption of increased prevalence owing to enhanced attention to stalking in the media, which speaks in favor of the prevalence of stalking—like that of other criminal offenses—being quite stable.

Both in 2003 and in 2018, the mental disorders of stalking victims were more severe than those in persons who had not been exposed to stalking. In both surveys, the former had significantly worse scores for overall wellbeing, anxiety, and depression (WHO-5, PHQ-D). Moreover, the chance of fulfilling the criteria for a mental disorder diagnosis according to the PHQ-D was higher in victims than non-victims by a factor of 3.5 in 2003 and 2.7 in 2018. In contrast, there was no difference in the corresponding outcome measures between stalking victims in 2003 and in 2018. Characteristics of the severity of stalking, such as frequency and duration, seem to be associated with elevated depression in the victims. Thus no improvement in the situation can be identified on the basis of our results, and the data confirm the findings of studies from other countries with regard to the elevated prevalence of mental disorders in victims of stalking (16, 17, 18, 19). Despite the increased availability of counseling and treatment, care still needs to be optimized. The legal powers against stalkers, strengthened during the period between the two surveys, were viewed as inadequate by just over half of the victims in 2018, against 45.5% in 2003. In both surveys, a strikingly high proportion of the stalking victims had insufficient knowledge of the scope for legal action (53.2 % in 2003, 47.9 % in 2018).

In conclusion, our study has shown that the provision of counseling and information for those exposed to stalking remains insufficient. The victims still regard the legal powers against stalkers as inadequate. Whether the reform of § 238 of the Criminal Code will achieve any improvement remains to be seen, but how it is implemented in practice will be crucial.

Physicians and psychologists should be aware of the clinical aspects of stalking and familiar with risk assessment (see “The Clinical Perspective”). Those caring for victims of stalking must always bear in mind the possibility of escalation and the need for dynamic risk assessment (31, 32, 33).

The anti-stalking rules presented in the Box are valid for all constellations and should be followed in the care and treatment of all stalking victims. The manual published by Gallas et al., for example, can be used in cases where more intensive care is needed (34).

The study was supported by Weisser Ring e.V. 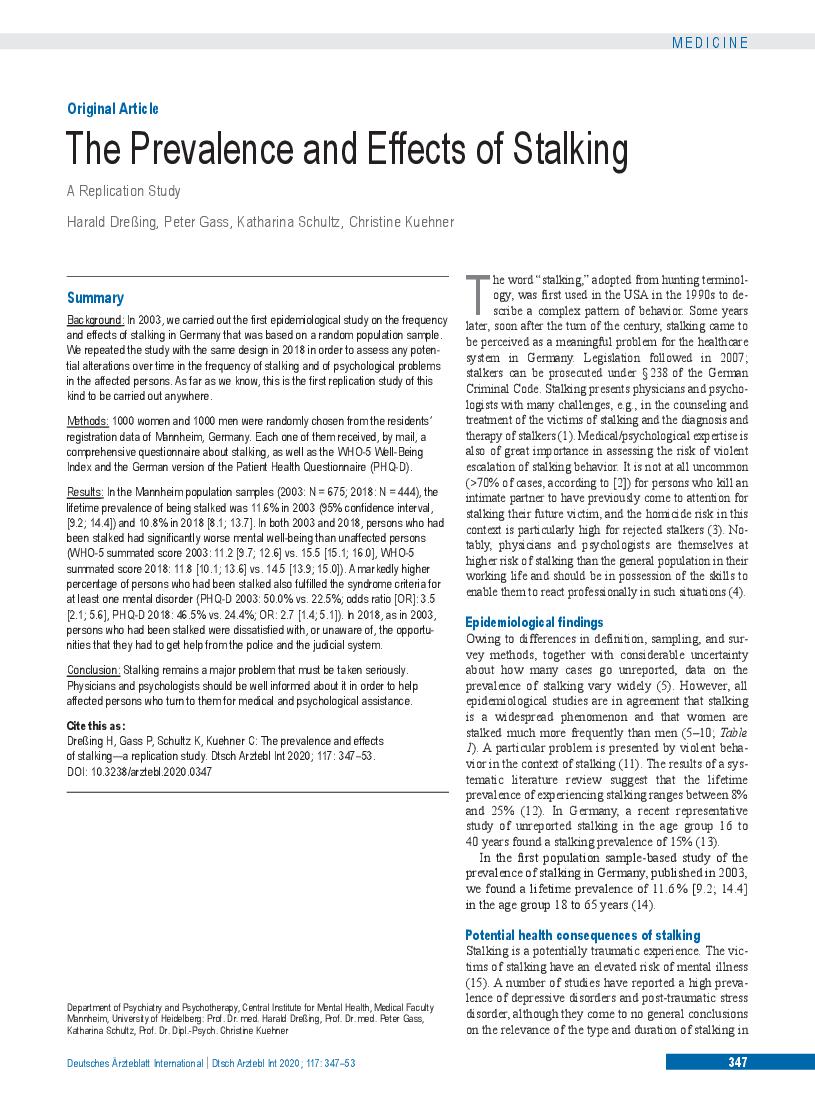