Background: Identifying regions with low life expectancy is important to policy makers, in particular for allocating resources in the health system. Life expectancy estimates for small regions are, however, often unreliable and lead to statistical uncertainties when the underlying populations are relatively small.

Methods: We combine the most recent German data available (2015–2017) with a Bayesian model that includes several methodological advances. This allows us to estimate male and female life expectancy with good precision for all 402 German districts and to quantify the uncertainty of those estimates.

Results: Across districts, life expectancy varies between 75.8 and 81.2 years for men and from 81.8 to 85.7 years for women. The spatial pattern is similar for women and men. Rural districts in eastern Germany and some districts of the Ruhr region have relatively low life expectancy. Districts with relatively high life expectancies cluster in Baden-Wuerttemberg and southern Bavaria. Exploratory analysis shows that average income, population density, and number of physicians per 100 000 inhabitants are not strongly correlated with life expectancy at district level. In contrast, indicators that point to particularly disadvantaged segments of the population (unemployment rate, welfare benefits) are better predictors of life expectancy.

Conclusions: We do not find a consistent urban–rural gap in life expectancy. Our results suggest that policies that improve living standards for poorer segment of the population are the most likely to reduce the existing differences in life expectancy.

Comparisons of such large areas are certainly informative. Appropriate planning of health services, however, requires analysis at a finer geographic scale. Small-area estimates are therefore crucial in identifying marginalized regions. This is particularly important with regard to Art. 72 [2] of Germany’s constitution, which empowers the federal government to enact legislation to provide equivalent living conditions.

To improve the identification of such regions, we estimated—based on age-specific mortality rates—life expectancy at the district level for women and men in Germany.

Our article has two substantive goals. First, we wanted to provide reliable estimates for small areas by using methods that do not suffer from instability and high uncertainty when the underlying populations are small. Standard estimators are vulnerable to random statistical fluctuations when there are only a few deaths from which to estimate mortality in small populations. In addition, our statistical approach also produces estimates of the underlying uncertainty. Such estimates of uncertainty are valuable for assessing whether differences in life expectancy between two districts are real or merely the random outcome of small numbers of deaths in districts of modest size. To our knowledge, no such interval estimations of life expectancy at the district level in Germany have yet been published.

Second, we wanted to examine whether there are specific patterns of correlation between social and economic indicators at the district level and local life expectancy. It is well known that poor, disadvantaged, and less (formally) educated people have lower life expectancy than those with higher income, better economic prospects, or a university degree (5, 6, 7). This is likely due not only to income and resources per se, but also to the higher prevalence of unhealthy lifestyles such as poor diet, smoking, and excessive drinking or to occupation-specific hazards among people with lower income or lower level of education (8, 9). By producing district-level estimates for life expectancy in Germany and investigating their correlations with social and policy variables, we hope to provide useful data and a solid foundation for future, more detailed, analyses.

Annual death counts span slightly less than two orders of magnitude. In 2017, for example, there were 449 deaths in Zweibrücken and 34 339 deaths in Berlin. Slightly more than half of all districts had between 1200 and 2700 deaths in 2017.

We use a new relational model to estimate mortality rates by age and sex in each district. Relational models, such as the Brass logit model (12), have been widely employed for populations with sparse data, and were also partly used for estimation of life tables in Germany’s component states after the register-based census in 2011 (13). The relational TOPALS model that we used was proposed by de Beer (14), and has good statistical properties even in very small populations (15, 16).

Based on the given death counts and person-years lived, this distribution assigns higher probability to e0 values that are more likely according to the model. Its median serves as the point estimate of life expectancy at the district level. We represent the uncertainty of our estimates by means of the interval between the 10th and 90th percentiles, which spans 80% of possible values for local e0. Mathematical and statistical details can be found online at http://german-district-mortality.schmert.net.

Figure 1 displays estimates of life expectancy and of 80% probability intervals for each district and both sexes. We highlight the 10 largest cities and the districts with the highest and lowest life expectancies for women and men. Based on the estimated mortality rates for the years 2015–2017, men in Bremerhaven had the shortest life expectancy, while men living in the district surrounding Munich (Landkreis) could expect to live around 5 years longer. We found the lowest life expectancy for women in the Salzland district of Saxony–Anhalt, the highest in the Starnberg district, southwest of Munich. The eTable provides a list of all districts, arranged by federal state, with point estimates and 80% interval estimates. The light blue and light red bars in Figure 1 indicate these 80% probability intervals. Because of the larger populations these bars are narrower for the largest cities than for less densely populated districts. The width of the interval estimates varies from 0.14 years for Berlin to 0.55 years for Ansbach and Osterode am Harz; the median is 0.36 years.

Figures 2 and 3 give a good impression of the distribution of life expectancy across districts in Germany. eFigures 1 and 2 show the same maps for men and women with the rankings of the individual districts. District ranks should be interpreted cautiously due to overlapping interval estimates, but they indicate the approximate position among the 402 rural districts. An alphabetical list of districts by federal state is given in the eTable. Paler shades, denoting districts with lower life expectancy, are found more frequently in the east than in the west, especially for males. However, also in western Germany there are districts with comparably low life expectancy, especially districts in the Ruhr region, such as Dortmund or Gelsenkirchen.

It is well known that economic development, local conditions, and the availability of medical services can play important roles in life expectancy (17, 18). We now go on to explore what correlations exist between district-level life expectancy and social and economic indicators from the INKAR database (INKAR, Indikatoren und Karten zur Raum- und Stadtentwicklung [Indicators and Maps for Spatial and Urban Planning]) (19).

The correlations between population density, physician density, and life expectancy are relatively low. It is interesting, however, that these correlations point in different directions in the east and the west: in eastern districts life expectancy rises slightly with increasing population density and physician density, while in western districts it declines slightly. Therefore only in eastern Germany does living in an urban area or a more densely populated region confer an advantage with regard to life expectancy.

The data in Figure 4 also demonstrate that economic indicators are much stronger predictors of life expectancy than population density or the number of primary-care physicians per 100 000 residents. This contradicts speculation in the popular press (21) that differences in the proximity to medical care could explain regional differences in health and mortality.

The positive relationship between GDP and life expectancy across countries has been well known since the 1970s (17). The same pattern is visible in our analysis of districts: higher GDP per capita coincides with higher life expectancy.

Correlations between life expectancy and population density, physician density, and GDP are relatively low, however, compared with economic indicators that focus on the most disadvantaged residents of a district. As seen from the bars in the lower section of Figure 4, indicators such as unemployment rate, housing subsidies, and other measure of public assistance have notably higher correlations (all negative) with district-level life expectancy. It is also interesting to note that local unemployment and public subsidies are more strongly related to lower life expectancies in western Germany.

In our opinion the simple correlations illustrated in Figure 4 clearly show it is not the average economic conditions in a region that influence life expectancy, but rather the circumstances of persons at the lower end of the socioeconomic spectrum.

It is important to mention a few methodological limitations: Our estimates are based on the current population and death counts in each district, and could consequently be affected by selective migration. For instance, migration of particularly healthy people may reduce life expectancy in their home district and increase life expectancy in their new district. Neither our data nor our methods can control for this. In addition, models like ours that pool information across small units in order to lower variability tend to pull statistical outliers with small populations towards regional and national means. This is a classic bias–variance trade-off, and in some cases it may cause too much smoothing for a “real” outlier with a small population. Without a longer time series or additional information to identify such outliers, this is an unavoidable risk.

Although cross-sectional, aggregate data do not permit causal inferences, we explored bivariate correlations between district-level life expectancy and macrofactors often discussed in the media, such as population density or physician density. Our results indicate that these factors are notably less important than economic indicators that focus on poorer population segments, such as the unemployment rate or welfare payments.

Life expectancy summarizes the entire age profile of mortality in a single number. Thus, further analyses focusing specifically on infant and childhood mortality or mortality in higher age groups might yield different results. By providing all data, code, and results at http://german-district-mortality.schmert.net/ we encourage and enable other researchers to thoroughly understand our model, to reproduce our findings, to update them with new data, and to use them for independent analyses. Important examples of wider-reaching research initiatives would include more detailed examination of mortality by age and the integration of lifestyle factors such as smoking prevalence, alcohol consumption, or physical activity (22). 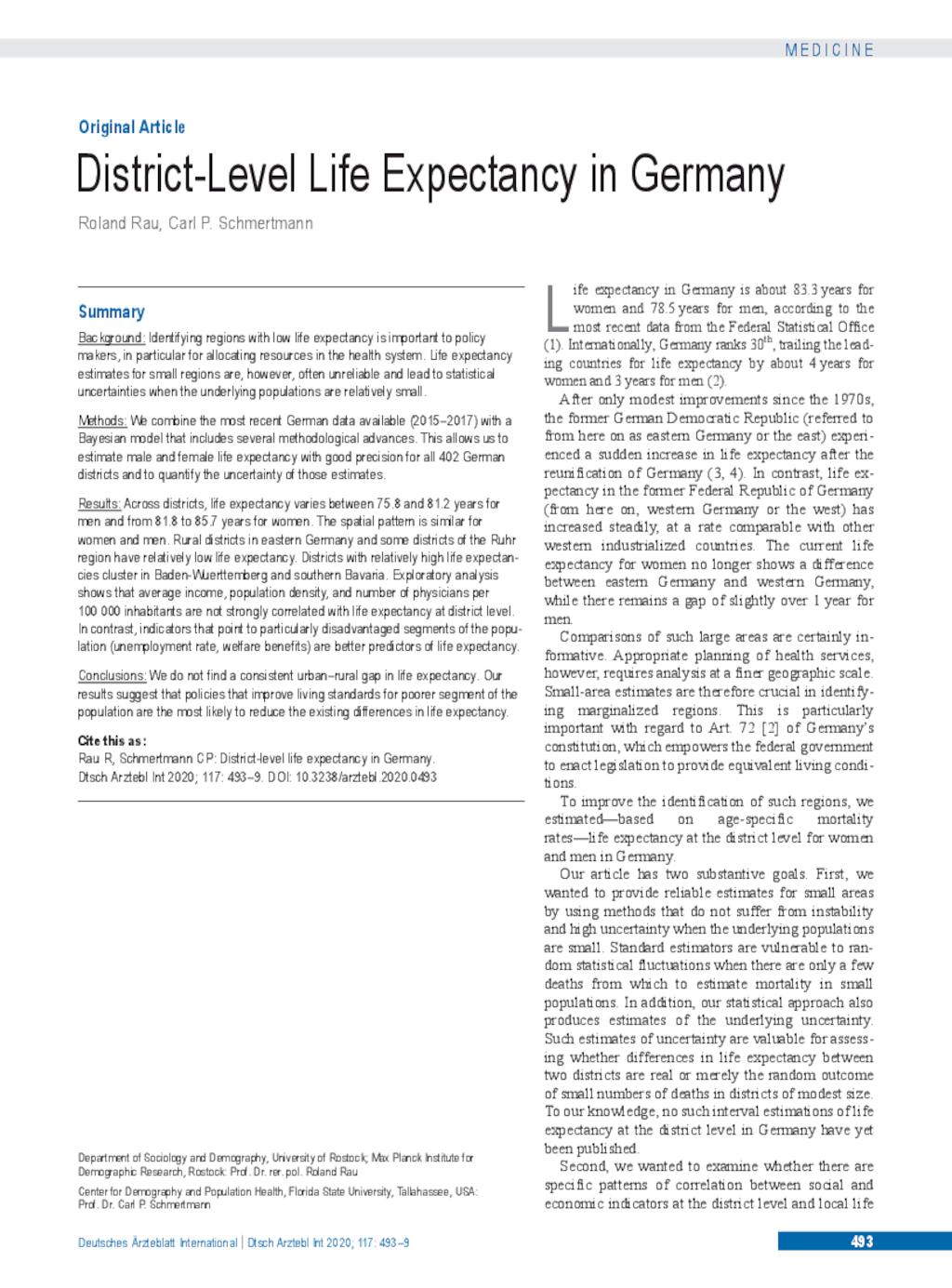