Hydrochlorothiazide (HCT) is one of the most commonly prescribed medications in Germany. In 2017, a total of 22.0 million packs were prescribed; 95% of these were pack size N3. In October 2018, the European Medicines Agency (EMA) and the Federal Institute for Drugs and Medical Devices (Bundesinstitut für Arzneimittel und Medizinprodukte, BfArM) in a “Dear Doctor” warning letter (Rote-Hand-Brief) expressed safety concerns with regard to HCT-containing medications. These concerned a dose-related increased risk for dermal basal cell and squamous cell carcinomas (1). The present article aimed to study antihypertensive prescription regarding antihypertensive medications, especially of diuretics containing HCT and thiazide-like ingredients (TZ diuretics).

The analyses are based on data from the German Institute for Drug Use Evaluation (Deutsches Arzneipruefungsinstitut e.V., DAPI). This institute receives anonymized claims data from community pharmacies regarding dispensed medications, which were prescribed at the expense of the statutory health insurance scheme. The institute’s database includes claims data of a representative sample of more than 80% of community pharmacies, distributed over all Germany’s regions. This sample was extrapolated to 100%. In the data analysis, all sales of all antihypertensive substances from January 2017 to December 2019 were included (Anatomical Therapeutic Chemical Classification System, [ATC]: antihypertensives [C02], diuretics [C03], beta blockers [C07], calcium channel blockers [C08], and ACE inhibitors/sartans [C09]). To study the TZ diuretics, we included all mono and combination preparations. To quantify the differences in dispensing behaviors we calculated differences in mean monthly sales before and after October 2018. We used bootstrapping using 1000 replications to determine 95% confidence intervals (R version 4.0.0).

Sales of HCT in the first three quarters of 2018 remained steady, at a mean of 1.78 million packs per month (Table). After the “Dear Doctor” warning letter was published in October 2018, sales of all TZ diuretics (including HCT) fell continuously. HCT accounted for most of the sales of all TZ diuretics (93.5% before and 87.3% after October 2018). Of the five TZ diuretics offering an alternative to HCT, xipamide, indapamide, and chlorthalidone before October 2018 sold the largest numbers; their sales remained almost constant from January to September 2018 (Table). After October 2018, sales of these substances rose notably. In all classes of antihypertensive medications, increases were posted before and after October 2018 when comparing average monthly sales (Table). In the second half of 2019, monthly sales of TZ diuretics fell by 347 200 packs, whereas sales of all other substance classes increased by 766 200 packs. Most of these were accounted for by ACE inhibitors/sartans and calcium channel blockers. Overall, 418 900 more packs were sold.

The potentially carcinogenic effects of HCT are presumed to be due to the photosensitizing effect of the sulfonamide structure, which, however, is also present in TZ diuretics and the loop diuretics furosemide and piretanide (2). In its position statement of 20 December 2018 the Drug Commission of the German Medical Association (Arzneimittelkommission der Ärzteschaft, AkdÄ) recommended no general therapeutic switch for all patients treated with HCT, but that the indication and risk should be considered individually (3, 4, 5). Furthermore, the recommendation was to switch to other TZ diuretics (such as chlorthalidone and inpadamide). Three studies were published (2) that investigated the association between indapamide and skin cancer risk. Two of these studies found an increased risk for malignant melanoma, but none of the studies showed an increased risk for developing non-melanoma skin cancer.

In spite of these uncertainties, the publication of the named studies and the “Dear Doctor” warning letter in October 2018 have probably changed prescribing behaviors in Germany. Sales of all TZ diuretics fell notably. The increase in sales of alternative diuretics (indapamide, chlorthalidone, and others) accounted only for about 22% of the drop in sales of packs of HCT. Drug shortages (for example, Hygroton, Inda-PUREN) were an added complication to prescribing these medications. In the first six months of 2019 an estimated 840 000 fewer patients may have received a TZ diuretic than before October 2018. The assumption that forms the basis of the calculation of the patient numbers—that each patient receives one pack (N3) per quarter—is understandable but only an approximate estimate, among other reasons because of possible splitting of the tablets. The increase in sales of loop diuretics by some 48 000 packs per month did not balance out the drop in TX diuretics by 280 000 packs. For this reason it can be assumed that in a relevant number (some 700 000) of patients who had previously been treated with HCT, the diuretic component of the antihypertensive treatment scheme was dropped.

Prescription numbers of antihypertensive substances have been growing continuously for years. It is therefore not surprising that the drop in prescriptions of TZ diuretics was exceeded by the increased sales of other substances. In absolute terms, the overall increase in all antihypertensive substances could have compensated the drop in sales of TZ diuretics. The great fall in sales of HCT and all TZ diuretics implies that in many patients, HCT treatment was stopped and no alternative diuretic was prescribed. Which antihypertensive therapy was prescribed instead in the individual case cannot be determined because no pseudonymized patient data exist and therefore medication profiles of individual patients were not followed over time. Whether the assumed changes in medication regimens will trigger an increased rate in hypertension or heart failure–associated complications remains to be seen.

Table
Comparison of average monthly sales (in thousands of packs) of thiazide diuretics and other antihypertensive substances before publication of a “Dear Doctor” warning letter with sales in the first and second half of 2019
Enlarge All figures
“Dear Doctor” Warning Letter (Rote-Hand-Brief) on... 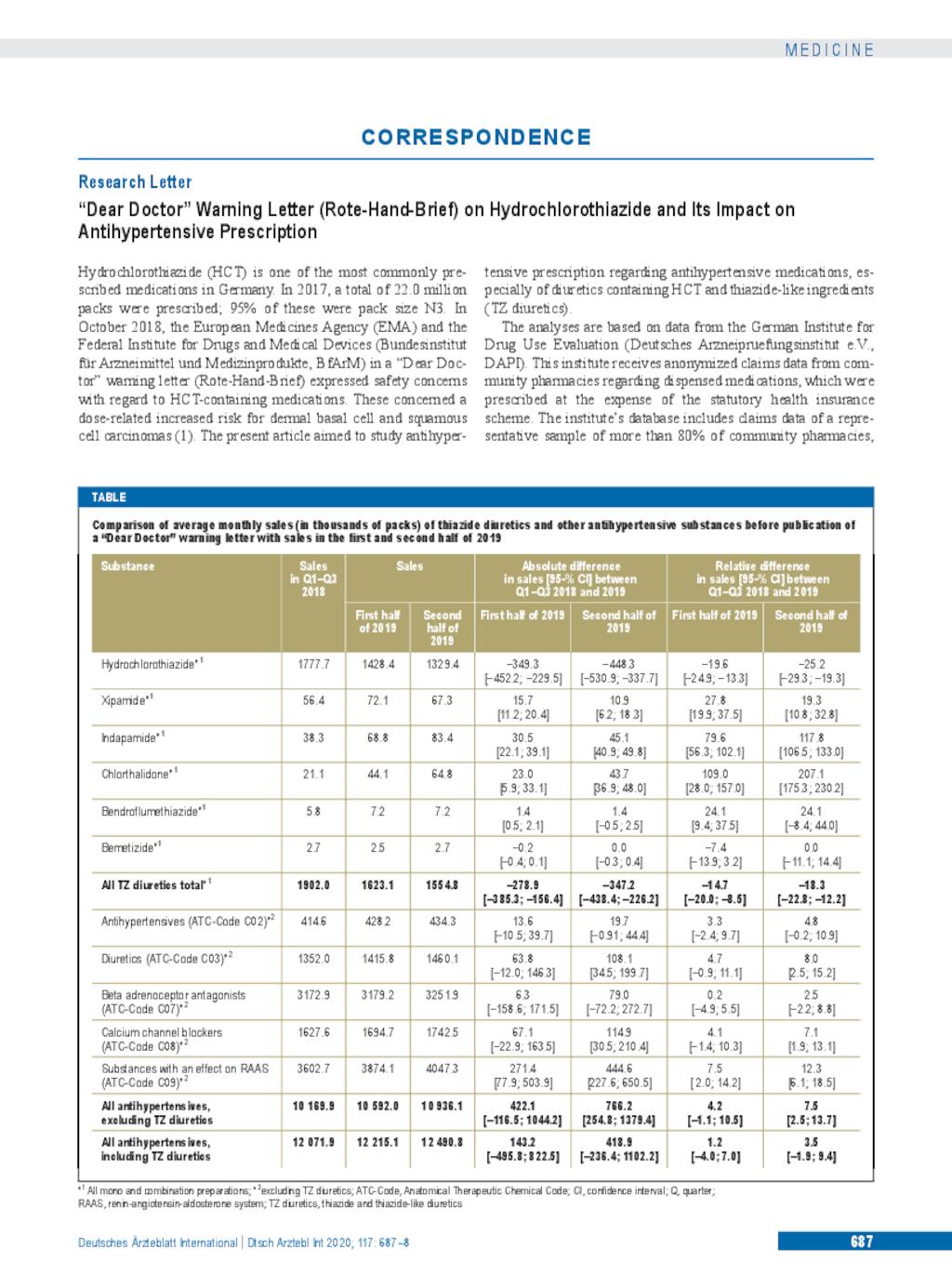