In our descriptive, observational register, only consecutive patients with major bleeding who had received either direct oral anticoagulants (DOAC) or vitamin K antagonists (VKA) were included. The main inclusion criterion was occurrence of a major bleeding event during oral anticoagulation, not the achievement of a laboratory target range. The aim was to map everyday clinical practice with regard to major bleeding in anticoagulated patients in Germany (1).

In the currently valid guidelines (2, 3), the therapeutic INR range for anticoagulation with VKA is recommended to be between 2.0 and 3.0 for venous thromboembolism and nonvalvular atrial fibrillation. The INR value was > 3.0 for 38% of the patients in the registry. Prof. Kiesewetter and Dr. Müntefering rightly point out that these high INR values ​​probably contributed to some of the bleeding. Having an INR that is too high despite correct prescription is unfortunately a frequent problem in everyday clinical practice, due to the narrow therapeutic range of VKAs; therefore, it is also reflected in our registry data. Although 25.8% of the patients treated with VKA had an INR value in the target range between 2.0 and 3.0, and 33% of the patients had an INR value < 2.0 at admission, major bleeding events also occurred in these patients. The results of our registry agree with other registry data from the literature (4) and show that, for older patients, having an INR value in the desired target range does not necessarily protect against a major bleeding event.

It is not possible to state how much more frequently major bleeding occurred with simultaneous administration of platelet aggregation inhibitors or non-steroidal anti-inflammatory drugs (NSAIDs) in an observational study that does not relate to the total population of orally anticoagulated patients. Table 1 of the article (1) shows that 24.4% of the patients also received aggregation inhibitor and / or NSAID. There were no differences in this regard between patients who received DOAC or VKA.

The subgroup analysis showed no significant differences with regard to the various bleeding types between patients treated with rivaroxaban or apixaban. However, neither the number of patients nor the study design is suitable for making a valid statement about this.

The descriptive analysis of our registry showed that tranexamic acid was used for 9.3% of VKA patients, and for 14.6% of DOAC patients (eTables 9a and 9b of the article [1]).

Department of Immunology and Transfusion Medicine,

Prof. Herrmann declares that no conflict of interest exists. 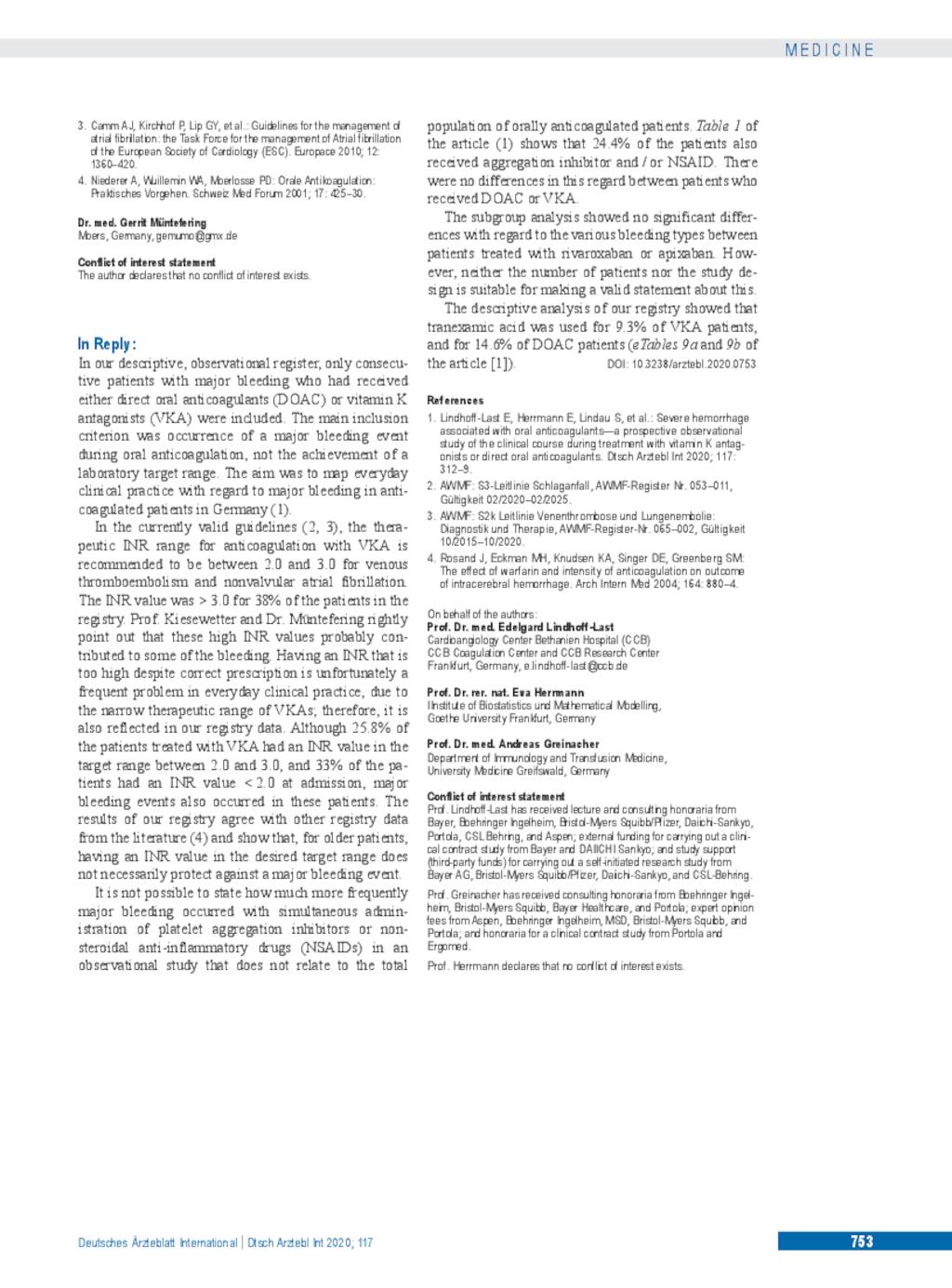