Compared to the first wave, the second wave of SARS-CoV-2 manifests itself strongly in newly reported cases, but less so in death counts. However, already the increasing case numbers put the mitigation strategy at risk, because with case numbers being too high, local tipping points are crossed, which makes the control increasingly difficult, impedes the targeted protection of the vulnerable people, and leads to self-accelerating spread (1, 2). Importantly, a tipping point is reached when case numbers surpass the test-trace-and-isolate (TTI) capacity of the local health authority, thus potentially long before hospitals are overwhelmed (1): When TTI breaks down, testing and tracing can only be carried out insufficiently and with considerable delay, which leads to more and more missed chains of infections. Thereby increasingly more SARS-CoV-2 carriers remain unnoticed, and thus transmit the virus inadvertently—also to people at risk. As unaware carriers are strong drivers of the spread of SARS-CoV-2, the case numbers start to rise more quickly, and the spread spills over to the vulnerable population. In the following, we present evidence for a second wave and the crossing of this tipping point.

In Germany, as in many other countries, the emergence of the second wave has been questioned, because only the case numbers have been rising since July, while hospitals were not overwhelmed and death numbers stayed almost constant (Figure 1). We investigated this apparent discrepancy using age-stratified case and death reports (3), and an age-dependent infection fatality rate (IFR). The IFR is derived from a meta-analysis of seroprevalence studies and extensive PCR tracing programs (4). Approximately, the IFR increases by a factor of 10 for every 20 years of age, being about 10% at age 82 . From this age-dependent IFR we predict the temporal evolution of the COVID-19-associated deaths by delaying each age group’s observed weekly cases by two weeks and multiplying by the IFR. Details and additional results are provided online (5).

Figure
The number of weekly COVID-19 cases (left), and the number of predicted and actual COVID-19- associated deaths are displayed for each age group
Enlarge All figures

The temporal evolution of the predicted COVID-19-associated deaths (color) matches the actually observed ones (black) well in each age group (Figure, right). Even the absolute numbers match, suggesting a low initial fraction of unobserved SARS-CoV-2 infection chains. This age-stratified analysis plausibly resolves the apparent discrepancy between the total reported infections and deaths: The rise in reported cases has been mainly driven by younger generations (younger than 60), who contribute only little to the absolute death counts, whereas the elderly (60+ years) managed to maintain low case numbers until recently. However, in September cases among the elderly started to increase steeply. This finding is not confounded by increased testing, because the test numbers in that age group stayed almost constant (3). This spill-over to the elderly strongly suggests a failure to protect the vulnerable people due to an increased number of unaware SARS-CoV-2 carriers. Moreover, this loss of control over the spread, is also marked by the increase of the reproduction number R since begin of October (Table). The spill-over and the increase of R are clear signatures of crossing the tipping point to uncontrolled spread. During summer 2020, the age groups 60+ apparently were protected well: If the virus had been spreading independently and equally among all age groups, an estimated 1.61% (95% confidence interval [1.29; 2.02]) of the infected would have died (calculated from the IFR in [4]). However, the case fatality rate (CFR) was only 0.39 % in August (Table). Now, with the strongly increasing number of infections among the elderly (Figure), the CFR will most likely increase soon. This indicates that protecting the people at risk might be possible whilst case numbers are low, but likely fails under high COVID-19 incidence.

Table
Comparison of observed and predicted deaths
Enlarge All figures

For the coming two weeks, the already reported cases clearly predict that the number of weekly deaths will almost double. Beyond two weeks forecasts are difficult, because the death counts depend on the not-yet-reported cases. To account for this uncertainty, we display two future scenarios, where in (A) we assume a linear increase, and in (B) an exponential increase in cases (methods in [5]). The resulting forecasts range between 500 and 800 weekly deaths in early November, but case numbers might even grow faster in case the second wave fully unfolds.

If the test-trace-and-isolate (TTI) system is overwhelmed and stops to function as a powerful means of control, mitigation of the spread breaks down and the rise of case numbers accelerates (1). Thus, the current development in Germany puts the past successful management of the pandemic seriously at risk. To re-establish control and to avoid crossing the tipping point when the TTI capacity is exceeded, case numbers have to be lowered without further delay. Otherwise the control of the spread and the protection of vulnerable people will inevitably require much more restrictive measures – at latest when the hospital capacity is reached.

Figure
The number of weekly COVID-19 cases (left), and the number of predicted and actual COVID-19- associated deaths are displayed for each age group
Enlarge All figures 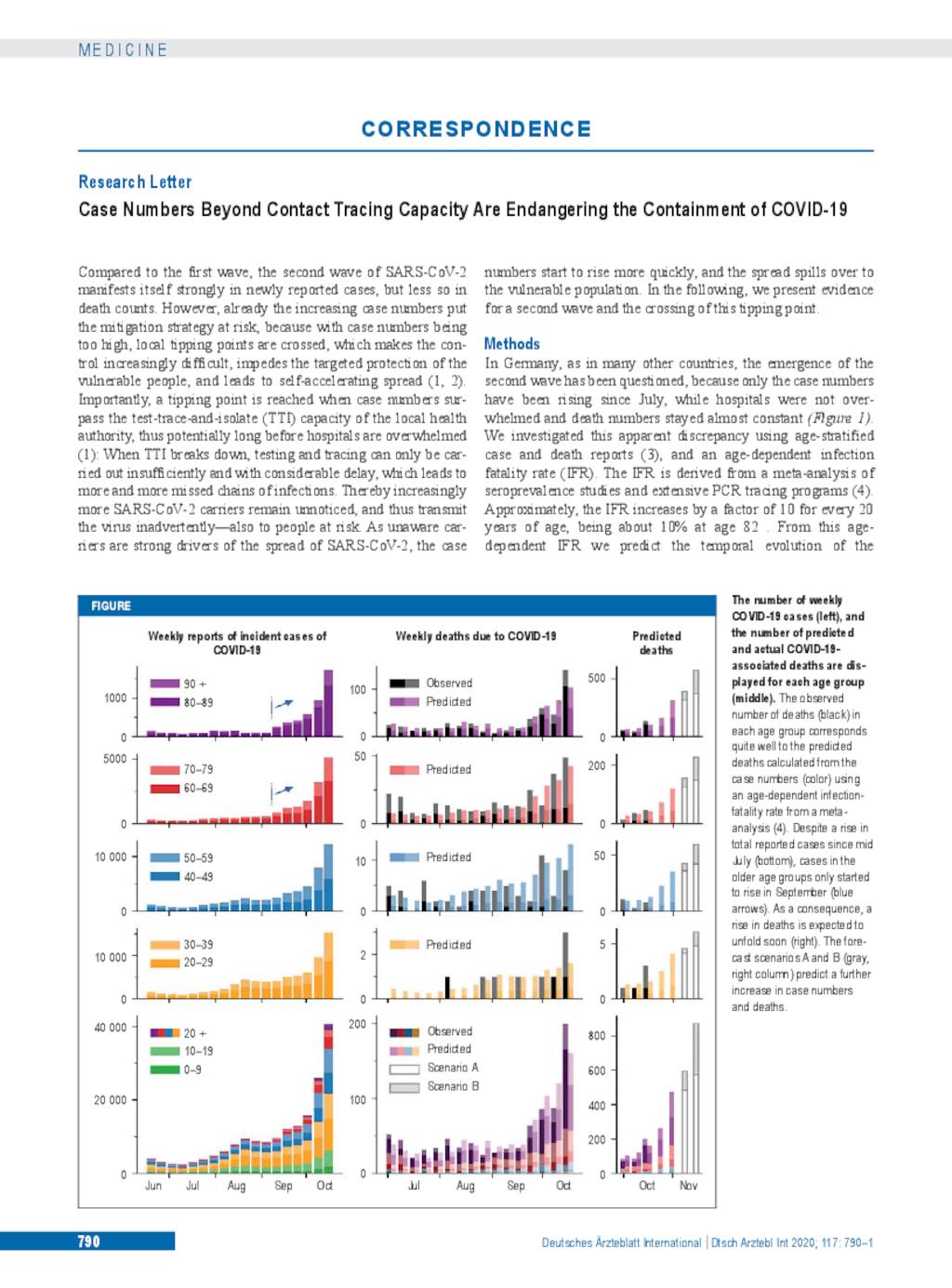