When the COVID-19 pandemic took off in March 2020, the available data from China remained insufficient to estimate the risk of SARS-CoV-2 infection for pregnant women and neonates (1, 2). To be able to counsel and treat pregnant women on the basis of data generated in Germany, the research network of the German Society of Perinatal Medicine (DGPM) initiated the COVID-19 Related Obstetric and Neonatal Outcome Study (CRONOS). Information on the study is available at www.dgpm-online.org und from the German Clinical Trials Register (DRKS00021208). On the background of case numbers of infections rising once again, we present the initial results of the registry, which has been in existence since 3 April 2020.

All German maternity hospitals were invited to participate in the CRONOS registry. Obstetricians and neonatologists from 121 German hospitals and from Kepler University Hospital Linz, Austria, accepted this invitation. Ethics approval was obtained (University Hospital Schleswig-Holstein (UKSH) in Kiel, file number D 451/20). A reporting form was developed using the cloud-based electronic data capture platform of the service provider castoredc.com (Amsterdam, Netherlands). Women with confirmed SARS-CoV-2 infection during pregnancy were included. In addition to COVID-19 specific symptoms and treatments, pregnancy and birth specific events and neonatal outcomes were documented. The data were entered by each treating hospital. After patients had given informed consent, the further course of the pregnancy, the postpartum period, and the neonatal period were observed up to six week post partum. The data presented here were retrieved up to 1 October 2020. We used the software package Prism 8.3.0 (GraphPad Software, San Diego, USA) for our statistical analysis.

98 of the 122 hospitals participated actively in the registry. These hospitals provided care during the preceding year for 185 787 patients, and thus >20% of births in Germany. Between 3 April 2020 and 1 October 2020, 247 cases were registered by 65 hospitals. The affected pregnant women were mostly (71%) younger than 35 and mostly (79%) had a body mass index (BMI) <30 kg/m2. 38% of women were going through their first pregnancy. An underlying medical condition requiring long term medical treatment was documented in 11.8% of pregnant women. Important parameters of mother and child regarding SARS-CoV-2 infection and outcomes are shown in the Table. 14 (5.6%) women were treated in intensive care for COVID-19. Most of these patients did not have any particular risk factors. Five patients were either obese, presented with hypertension, or had a combination of these risk factors. 10 of the 14 women were infected during their third trimester. In 9 out of 14 cases, the SARS-CoV-2 infection affected the decision to affected the decision to deliver or the mode of delivery. 205 women have since recovered from SARS-CoV-2 infection. 185 have given birth. Four neonates (2.2%) tested positive for SARS-CoV-2 by polymerase chain reaction (PCR) on their first or second day of life; all were discharged into their home environment. A follow-up survey after the neonatal period in 56 families did not yield any case of neonatal infection.

The CRONOS registry data imply a mostly favorable course of SARS-CoV-2 infection in those pregnant women in Germany who were included in the study. The high rate of asymptomatic patients in the CRONOS registry can be explained by the introduction of comprehensive screening in hospitals (3) and is reflected in the positive outcomes. That said, in the group under study, rates of premature births and cesarean deliveries seemed slightly higher than the German average in previous years—but lower than is reflected in international data (4). Although intrauterine transmission of the virus with neuronal involvement of the neonate has been reported recently (5), such an event seems very rare.

A limitation of this study is the fact that no conclusions can be drawn on the actual prevalence in pregnant women in Germany because of the cohort study design. Similarly, owing to the currently low case numbers, no final conclusions can be drawn regarding risk factors for severe maternal courses and neonatal infections. However, known risk factors such as diabetes, hypertension, and obesity should prompt special attention, especially in infections occurring during the third trimester. The CRONOS data provide important information for counseling and caring for pregnant women and their newborns. Further hospitals have been invited to participate, with the aim of documenting all SARS-CoV-2 positive pregnant women in the population of Germany.

The remaining authors declare that no conflict of interest exists according to the guidelines of the International Committee of Medical Journal Editors.

Table
Characteristics and outcomes of mothers and babies infected with SARS-CoV-2
Enlarge All figures
Pregnancy and SARS-CoV-2 Infection in Germany—the CRONOS... 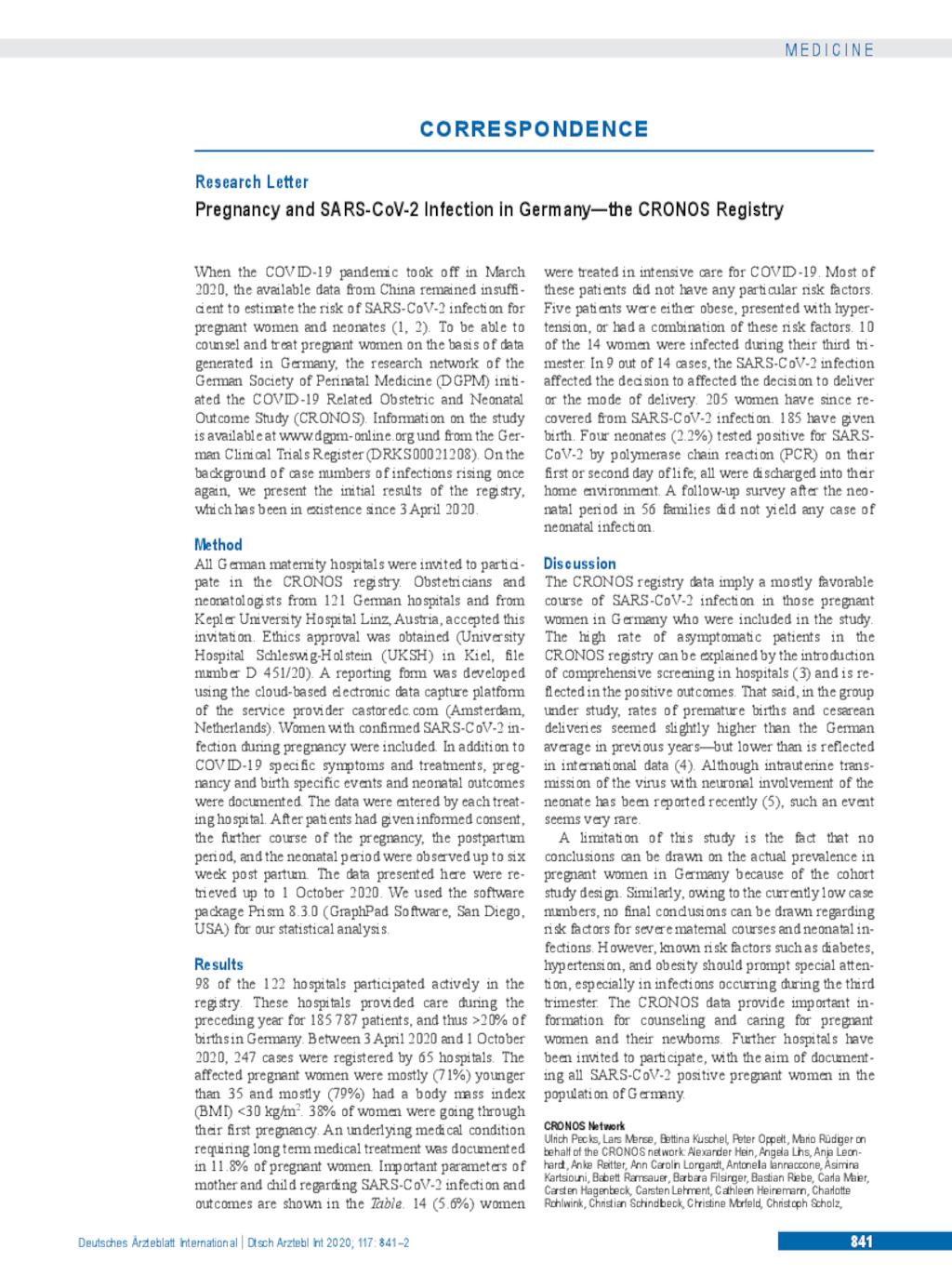