Newborn screening is known to be the most successful means of secondary prevention. Horst Bickel, the man who discovered the phenylketonuria (PKU) diet, pointed out at a very early stage that his diet had the best therapeutic effect in patients whose disease was diagnosed early. The PKU screening method (Guthrie test) he first introduced in his laboratory in Marburg in 1961 was implemented in the German Democratic Republic in 1969 and universally adopted in the Federal Republic of Germany in 1971. In the meantime, the Federal Joint Committee (Gemeinsamer Bundes­aus­schuss, G-BA) has increased the number of target disorders to 18 (including cystic fibrosis, hip dysplasia, hearing disorders, and congenital heart defects), and the addition of further conditions (sickle cell anemia, spinal muscular atrophy) is anticipated. Overall, around 1‰ of newborns are affected by diseases that, although incurable, will not necessarily lead to complications or late sequelae if state-of-the-art treatment is initiated at an early stage. However, we must not allow the great success of newborn screening to blind us to the need for adherence to standards of ethics and quality assurance (1).

Against this backdrop, Lüders et al. summarize the screening results from all 11 screening laboratories in Germany for the period 2006 to 2018. During this time, 12 metabolic and endocrine disorders were covered by the extended neonatal screening program (2). The authors’ analyses showed identification of almost 7000 children with target disorders among more than 9 million births (0.3‰ with hypothyroidism, 0.1‰ each with PKU and medium-chain acyl-CoA dehydrogenase deficiency) and revealed that the rate of positive screening results (recall rate), initially representing suspicion of the diagnosis concerned, improved from 0.9% (positive predictive value [PPV] 7.7%) to 0.37% (PPV 21.1%) over the study period, although the recall rate for adrenogenital syndrome (AGS) is still 0.13% (PPV 5.8%).

A less satisfactory finding is that 21% of the 6014 children who needed therapy did not begin their course of treatment within 2 weeks (this figure includes 8% for whom data on time of treatment initiation were missing). Thus 342 children with hypothyroidism, i.e., 12% of those with this disorder or 44% of the children whose treatment was delayed, were not started on L-thyroxine in the first 2 weeks of life as required by the pediatric guidelines. Since data on confirmatory diagnostic examinations were lacking in around 240 children strongly suspected of having hypothyroidism, and also 29 children with hypothyroidism had false-negative screening results, there seems to be room for improvement in the provision of endocrinological care.

One of the authors’ findings is depressing. Owing to deficiencies in the tracking system, approximately 54 000 children (around 20%) were lost to follow-up, 10% of whom had positive screening results. No subsequent investigations were documented in these cases. It is likely that the problems experienced in tracking, as well as in timely treatment initiation, occur more commonly in children whose parents have not been adequately informed about newborn screening or are of low socioeconomic status.

Without comparison with a centrally organized system, the present study does not prove that newborn screening can be implemented very successfully in a federal structure—although many of the quality parameters bear comparison with data from other countries. In Germany’s federally organized system of newborn screening, there are differences among the states in the number of target disorders (24 in Hesse), in tracking (supervised centrally at a “screening center” in Bavaria), and in funding (private, public, or, as in Hesse, from a body created and defined by state law).

The authors emphasize the large discrepancies among the screening laboratories with regard to the proportion of cases (1.1% to 37.3%) for which data on confirmatory diagnostic testing are missing. Tracking is mostly left to the laboratories themselves, with the degree of success dependent on the effort they invest. No specific funding for tracking is currently in place. In around half of the countries in Europe (including Austria and Switzerland), newborn screening for metabolic and endocrine disorders is centralized (3).

In addition to the considerable advantages for the affected children and parents, the economic benefit of newborn screening is immense (4). For example, the provision of lifelong nursing home care for an unscreened or untreated PKU patient costs around € 2 500 000, while someone who receives timely treatment for PKU and goes on to work for 40 years will, at a conservative estimate, contribute about € 500 000 in taxes and health insurance payments. From the public health perspective, this preventive approach should be maintained in this era of increasing commercialization of medicine, and should be linked with the duty to provide better care for children with chronic illnesses (5)—if patients are not to come to be seen as “consumers” (6, 7).

Two conclusions can be derived from the findings of Lüders et al. (2):

The authors’ analyses yield arguments in favor of compiling annual quality reports at national level for all screened disorders specified by the pediatric guideline (plus cystic fibrosis, hip joint dysplasia, hearing disorders, and congenital heart defects). The researchers who evaluated the newborn screening programs of 37 European countries in a study published in 2012 reported that even then, auxiliary advanced training programs in congenital metabolic diseases for pediatricians existed in some 40% of the nations concerned (8). No such courses have yet been set up by the medical associations of the German federal states. In my view, establishment of the auxiliary qualification “Advanced Pediatric Metabolic Medicine” is necessary in order to equip the emerging centers for rare diseases (with their increasing numbers of adult patients) with qualified medical staff.

To fulfill the requirements of scientific standards, quality assurance, and demand-oriented service, the screening programs of the future will need to be provided with rational resources and structures permitting care concepts that do not exclude children from socioeconomically disadvantaged families. The principle “benefits outweigh harms” (9)—e.g., not screening children for diseases that first manifest in adulthood—must underlie the discussion of “genomic/molecular screening” (10). 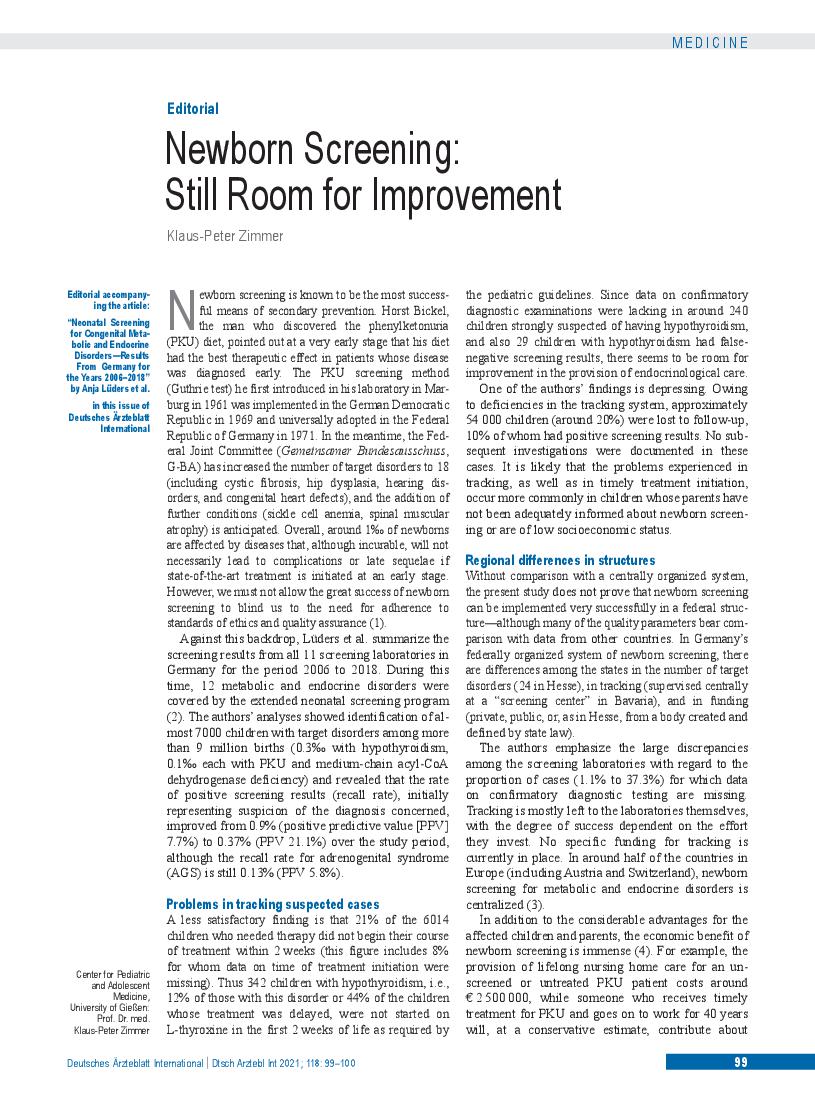