Anger et al. conclude on the basis of the StuDoQ data that patients with colorectal cancer who had surgery on a Monday and pancreatic cancer patients operated on a Tuesday have a significantly higher mortality, among others. Usually, these procedures are elective; this means that in future court actions brought for medical errors, patients will be able to bring a case against their surgeon for undertaking their surgery on the wrong day. Under certain circumstances the allegation might arise of gross negligence with a shift in the burden of proof. The surgeon would have to prove that the same complication would have occurred even if the procedure had been done on a different weekday. Such evidence can hardly be produced. The article results in unpredictable legal consequences—it was published on behalf of the quality center of a renowned specialist medical society; the publication was sent to every doctor licensed to practice in Germany.

The authors obviously succumbed to the magic of large numbers. In cohorts of several thousand patients, it is easy to prove statistical significance. But this is not the same as clinical relevance. One could design further such studies and investigate whether the result depends on the last digit in the hospital’s post code or the second letter in the name of the respective city. The risk adjustment in the study under discussion is not described with enough precision. It is a well known limitation of multicenter observational studies that it is barely possible to find homogenous cohorts—especially if study participation is not done for the purpose of neutral quality assurance but the granting (or non-granting) of a certificate.

It is a great shame that this publication, which cannot be taken entirely seriously, can cause such harm to German surgeons. The hospitals participating in the StuDoQ registry deserve better.

1.
Anger F, Wellner U, Klinger C, et al.: The effect of day of the week on morbidity and mortality from colorectal and pancreatic surgery—an analysis from the German StuDoQ register. Dtsch Arztebl Int 2020; 117: 521–7 VOLLTEXT
Risk Adjustment Was Imprecise 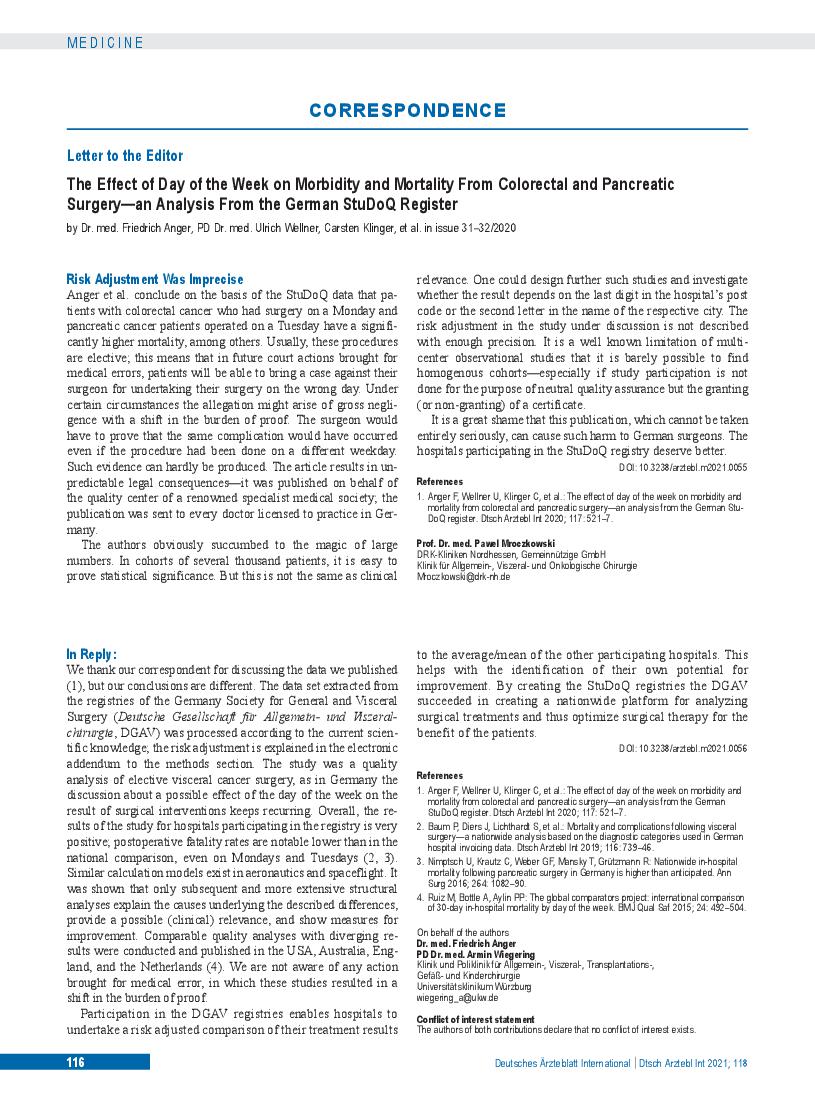