A retrospective analysis and comparison with cyclists

Methods: In a retrospective study, accidents with e-scooters and bicycles that occurred from June 2019 to June 2020 were registered and analyzed with respect to demography, accident mechanisms, diagnostics, patterns of injury, emergency medical care, operations, and inpatient hospitalizations.

Results: 89 persons sustained e-scooter accidents (mean age 33.9 years, standard deviation [SD] 14 years); 435 persons who sustained bicycle accidents (mean age 42.5 years, SD 17 years) served as a comparison group. E-scooter accidents more commonly occurred at night (37% versus 14%), and 28% of the persons who sustained them were under the influence of alcohol (cyclists: 6%). 54% of the injured e-scooter riders suffered trauma to the head or face; 14% had a severe head injury and 16% had a severe facial injury. Fractures of the upper limbs were more common than fractures of the lower limbs (18% versus 6%). On initial assessment in the emergency room, injured cyclists were more frequently classified as needing immediate treatment than injured e-scooter riders (7% versus 1%).

Conclusion: The head, face, and upper limbs are the most commonly affected parts of the body in e-scooter accidents. Compared to bicycle accidents, e-scooter accidents more commonly occur on weekends and in association with alcohol. From a medical point of view, abstaining from alcohol consumption and wearing a helmet when using an e-scooter is strongly recommended.

In June 2019, the rental of electrically powered scooters (e-scooters) was started in major German cities. Studies from the USA, where for several years electric scooters have already become part of city life, notably show a large number of cases of associated fractures (26–32 %) and head injuries (28–40%) (1, 2, 3). These observations have also been confirmed in studies from Europe (Denmark, Copenhagen) and also, as of May 2020, from Germany (Frankfurt) (4, 5).

However, the wide variety of regulations in force abroad makes comparison with the German road traffic situation difficult. Given the enormous popularity and similar use of bicycles in Germany (6), a direct comparison between e-scooter and cycle accidents would appear worthwhile. A need for this study is justified, firstly, by the fact that so far there has only been limited research on the integration of e-scooters on German roads and, secondly, by the ongoing debate about this form of transportation.

The aim of this study is to analyze the frequency of dical cosultations, the circumstances of the accident event, typical injury patterns, and accident severity involving e-scooter users in an urban area in Germany and to compare these parameters with those of cyclists.

Details were recorded from patient records regarding the time of the accident, circumstances of the accident event, diagnosis, and treatment. Where aspects were not clear from the documentation, they were listed as “not specified”. “Not specified” with respect to the variable “alcohol-intoxicated patient” was regarded as a non-intoxicated patient.

This is a descriptive analysis without alpha-error adjustment reporting case numbers of a sample taken from the total population of Hamburg. 95% confidence intervals (CI) were calculated for a total population of 1.8 million inhabitants of Hamburg with a sample size of 524. Continuous variables were described using mean and standard deviation. The Shapiro-Wilk test was applied to test for normal distribution. Either the t-test or the Mann-Whitney U test was used, depending on whether or not there was normal distribution. Categorical variables were compared using Fisher’s exact test.

The study was approved by the ethics committee of the Hamburg Medical Association (PV7262).

Epidemiology and circumstances of the accident event

Table 1
Circumstances of the accident event*
Enlarge All figures

93% of the patients were actual riders of the e-scooters; 7% tripped over an e-scooter as pedestrians. In the majority of e-scooter accidents, a fall without further details (79%) was the cause of injury. Collisions with other road users was significantly less frequent for e-scooter riders (2%) than for cyclists (18%). In 6% of cases, lacerations in the ankle region were sustained during initial scooter push-off (Table 1).

E-scooter riders and cyclists presented primarily on foot in the emergency department/outpatient clinic. While both groups needed to make use of the rescue services in about 30% of cases, 7% of cyclists, but no e-scooter rider, were brought into the emergency department accompanied by an emergency physician. Cyclists tended to be categorized as more severely injured (p = 0.021) as assessed by the Manchester Triage System (Table 1). The Manchester Triage System distinguishes between five categories of severity, with the need for medical attention ranging from 1 “immediate” to 5 “non-urgent” (7).

54% of e-scooter riders and 46% of cyclists reported an impact to the head or face. No e-scooter user was documented as having worn a helmet (Table 1).

Twelve percent of the e-scooter riders sustained a traumatic brain injury (TBI) and 2% an intracranial hemorrhage (ICH). Apart from soft-tissue injuries in 33% of e-scooter accidents, injuries to the face also included fractures of the facial bones which were diagnosed in 16% of cases. Whereas head injuries were seen somewhat more often in cyclists, e-scooter riders tended to have sustained more fractures and soft-tissue injuries to the facial bones (p = 0.058) (Table 2).

Injuries to the chest, abdomen and spine did not occur to any clinically relevant degree in e-scooter riders, while chest injuries in particular were more often seen in cyclists (p = 0.039)(Table 2).

More severe soft-tissue injuries of the extremities were seen in the malleolar region of the e-scooter riders with partial (subtotal) division of the tibialis posterior tendon in 6% of cases.

While 2% (8 cases) of the cyclists were severely injured casualties, with two fatalities, no such severe injuries were seen among the e-scooter riders.

Wound care was required significantly more often in e-scooter riders in 46% of cases than in cyclists in 27% of cases (p < 0.001). Plaster casts or braces were applied to an equal extent in 30% and 31% of cases, respectively (Table 3).

In the majority of cases, patients were discharged into outpatient care after primary treatment. In both groups, about one third of cases required hospital admission. There was an indication for surgery in 28% of e-scooter and in 24% of cycling accidents. The exact frequencies regarding diagnostics, treatment and discharge modality are listed in Table 3.

This study presents the largest study population to date involving injuries to e-scooter users in Germany. Altogether, 89 patients were included in the study over a period of one year and compared with 435 cyclists injured over a period of four months. A total of 50 e-scooter-associated accidents were registered during the corresponding four months, with accidents involving the use of cycles being unsurprisingly about nine times more frequent.

A striking feature is the large number of clinically relevant head and facial injuries diagnosed in 46% of the e-scooter cases. In May 2020, Störmann et al. from Frankfurt reported 38% head and facial injuries in their study population involving 76 injured e-scooter users (5). Studies from the USA, New Zealand, and Denmark present similar numbers (eTable). The proportion of head and facial injuries in the foreign studies was also between 20 and 46% (3, 4, 8, 9). Whereas a helmet was worn in 4–6% of cases in other countries (Denmark, USA, and New Zealand) (1, 4, 8), there was no documented helmet wearer among the e-scooter users in our patient population from Hamburg. In a study from Brisbane, Australia, published in 2019, 46% of the injured e-scooter riders had worn a helmet. A comparison of the subgroups demonstrated a significant reduction in the severity of the head injuries among the helmet users (10). The difficulty here obviously lies in the provision of helmets as part of the e-scooter hire scheme and the lack of compulsory helmet use in Germany.

The influence of alcohol also appears to be a risk factor contributing towards the large number of head injuries in e-scooter riders. Among the 25 alcohol-intoxicated patients, 23 (92%) sustained an injury to the head or face. In addition, 12 of 31 patients (39%) with a fracture were under the influence of alcohol. The combination of impaired driving ability and the construction of e-scooters appears to have a significant impact on the severity of the accident. The proportion of intoxicated riders in our patient population of e-scooter users was very high at 28% but is consistent with the figures of other studies from Europe and Australia (Copenhagen 37%, Brisbane 28%) (4, 10). The only other available study from Germany did not provide any details about alcohol consumption (5). Studies from California, USA, report a considerably smaller proportion of intoxicated riders at 5–18 % (3, 9, 11). One reason for this could be cultural differences combined with a severe penalty for intoxicated riding (12, 13).

The proportion of 18 to 40-year-olds among the e-scooter riders of 72% was somewhat higher than in other studies (60–64 %) (3, 4). Just over one half of e-scooter riders were injured at the weekend, which would indicate leisure-oriented use. Whereas e-scooter users sustained a fall primarily with no external cause, the more frequent collisions of cyclists with other road users are possibly due to having to share the road with cars.

One particular injury noticed in the present study had previously not been associated with the use of e-scooters and was probably caused by a sharp-edged kickstand or other parts of the scooter deck. A (subtotal) division of the tibialis posterior tendon was diagnosed in two cases with soft-tissue injuries in the region of the medial malleolus. Injury to this tendon can have long-term consequences for the patients (14).

Limitations of this study include

Given that many patients also presented in the emergency department with minor injuries, we may safely assume that we identified a large spectrum of e-scooter-related injuries. Another limitation may be the absence of data for cyclists collected during the winter months, so snow- and ice-related falls were not included.

Overall, there was a large proportion of head and facial injuries and a relatively large number of injured patients with alcohol intoxication among the e-scooter users. From a medical and traumatological point of view, legislation on the compulsory use of helmets should be urgently considered, and compliance with current blood alcohol limits should be enforced. The same applies for cyclists. We also discovered an increased risk of injury to the tibialis posterior tendon from sharp-edged components of the e-scooter. 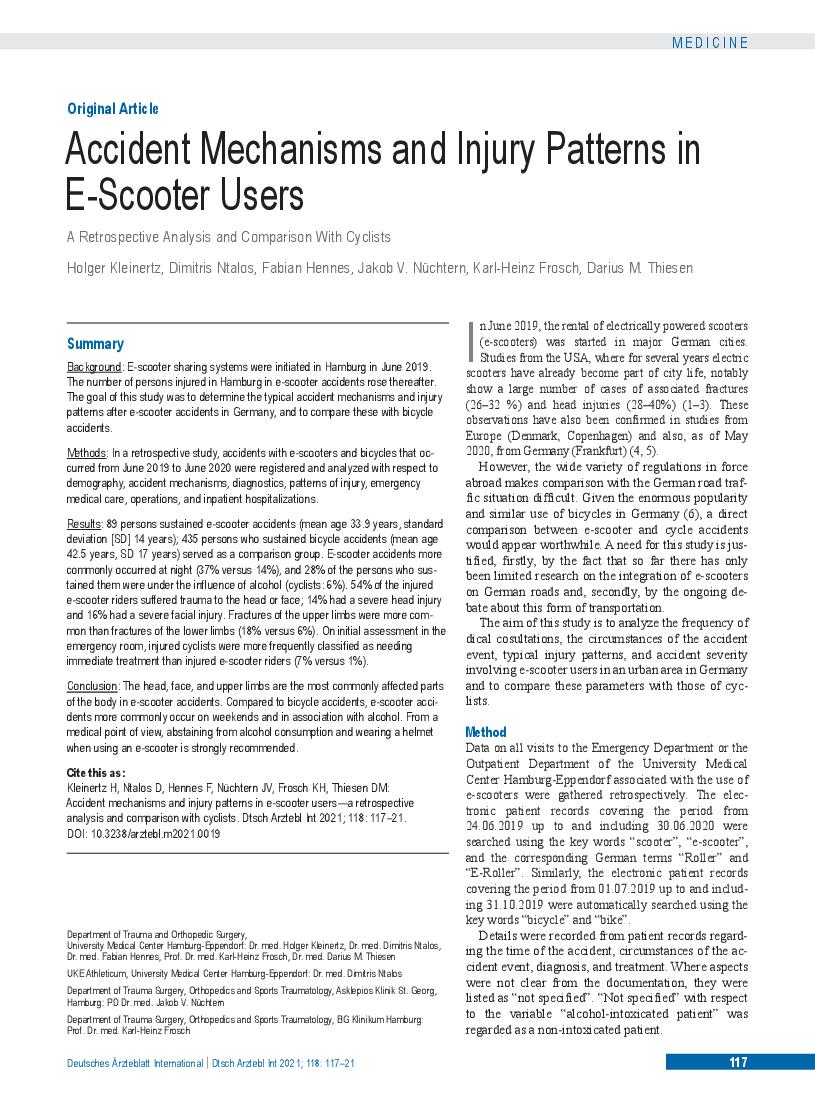