Sexual violence in the context of war and displacement is one of the gravest human rights violations, which often causes posttraumatic disorders in those affected (1) and, as a result, remains comprehensively concealed by survivors themselves and their social environment, where the violence occurred or where they live (2). Sexual violence includes any kind of psychological or physical violence that attacks sexual characteristics or sexuality in one or more persons. Especially in regions where conflict prevails or post-conflict regions, distinction is made between rape and/or multiple perpetrator rape, sexual torture practices, genital mutilation, sexual degradation, and the threat of sexual violence (1). According to what is known today, the overwhelming majority of those affected are girls and women, but more recently, a growing number of reports has documented the existence and extent of sexual violence against men and boys in the context of war and displacement (3,4). Academic studies investigating experiences of systematic sexual violence and the possible consequences for the mental health in refugees are lacking to date.

Descriptive analyses of mental stress in refugees with experiences of sexual violence are presented on the basis of data from a cross sectional study in a reception facility for asylum seekers in Saxony. In the period from May 2017 through June 2018, out of a total of 1316 newly arrived adult residents, 562 persons (response rate 42.7%) were interviewed about their experiences of sexual violence and depressive (PHQ-9), somatoform (SSS-8), and posttraumatic stress disorders (PCL-5). The questionnaire was available in 10 different languages (Albanian, Arabic, English, Farsi, French, Kurdish, Russian, Tigrinya, Turkish, and Urdu), translated both ways. Detailed information on the course of the study can be found in Nesterko et al (5). Experiences of sexual violence were assessed via two items of the life events checklist “sexual assault (rape, attempted rape, or being forced to engage in any kind of sexual activity with violence or the threat of violence)” and/or “other unwanted sexual experiences.”

The results of our survey provide for the first time data on the rates and possible mental health outcomes of sexual violence in male and female refugees seeking asylum in Germany. The prevalence rates we determined should, however, be considered on the background of potential selection bias. Overestimates owing to the selectivity of the sample is one possibility, as are underestimates owing to the fact that the phenomenon is strongly taboo. Because of the rather explorative nature of the results, there is a need for systematic and differentiated further research into the topic. For methodological reasons it was not possible in the context of this survey study to assess and analyze accordingly the different forms of sexual violence and the exact time at which it occurred. Future research should investigate this aspect in greater detail. Studies should focus on sex/gender related specifics.

The results of our study show that male refugees may be less often affected than female refugees, but still to a comparably substantial degree. It seems reasonable to assume that the form of the violent act (for example, rape versus sexual torture), the number of assaults (repeated versus once), and information about the times and places where sexual violence was experienced (before, during, after the flight, and in the country of origin, transit countries, in the safe country of current residence) would provide valuable information enabling us to understand better the psychological consequences and their treatment in survivors of sexual violence. Future research should therefore focus in a disorder-specific way on possible protective and risk factors and symptom courses. Furthermore, greater attention should be paid to the topic in somatic medicine, as survivors often initially present with somatic symptoms and may need medical care for these in addition to trauma-sensitive psychotherapeutic care.

The overriding task for both clinicians and scientists lies in lifting the taboo off sexual violence—that is, asking directly and specifically whether sexual violence has occurred, paying special attention to male survivors, reducing stigma for all survivors, and developing and providing specific healthcare services. 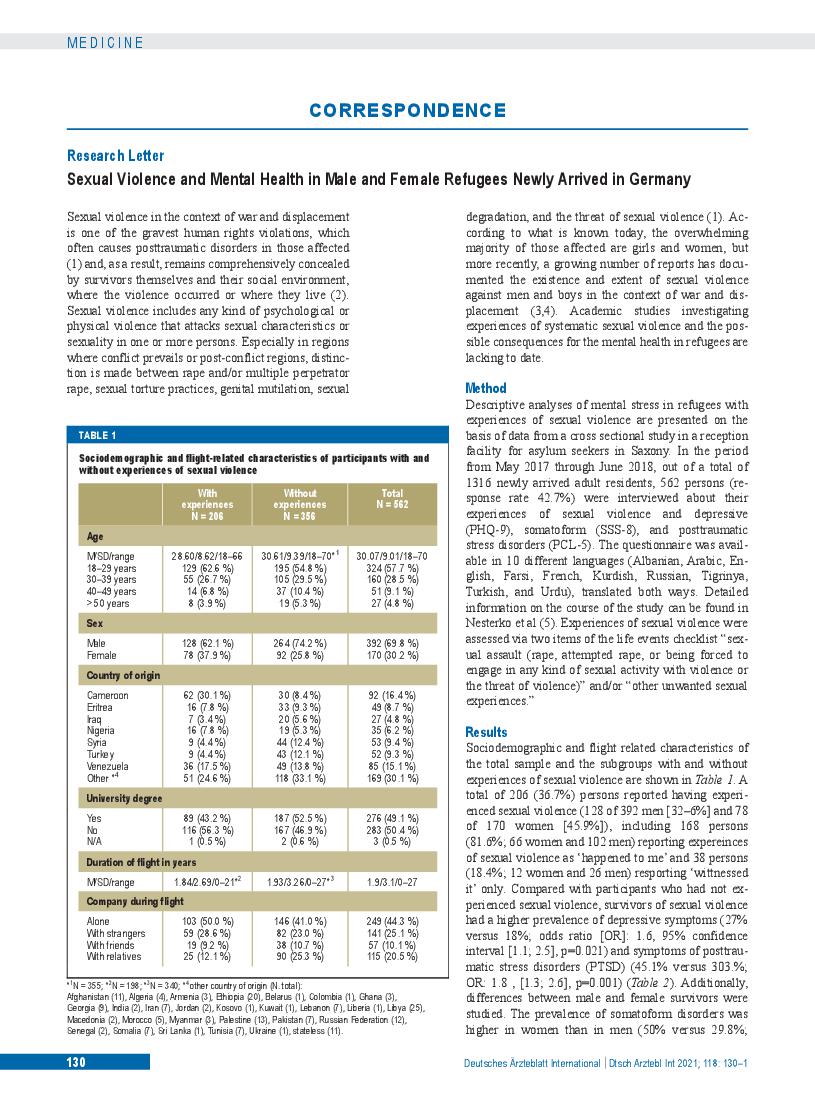