DÄ internationalArchive12/2021From Recommendation to Implementation—Recommendations of the German Clinical Practice Guideline and Choice of Antidepressants for Children and Adolescents: Analysis of Data From the Barmer Health Insurance Fund

From Recommendation to Implementation—Recommendations of the German Clinical Practice Guideline and Choice of Antidepressants for Children and Adolescents: Analysis of Data From the Barmer Health Insurance Fund

In 2013 the first German Clinical Practice (S3) guideline for the treatment of depression in children and adolescents was published. The guideline recommends pharmacological treatment with SSRIs beginning in the 9th year of life in cases where psychotherapy is not possible or is not sufficient. The present study investigates on the basis of health insurance data the prescribing behavior practice regarding antidepressants for depressed minors of physicians in private practice before and after publication of the S3 guideline.

Our analysis is based on person years—that is, the sum of individual years during which children and adolescents aged 8–17 years were insured with the Barmer fund in the respective calendar years before the guideline was introduced (2008–2012) and after its publication (2014–2018) (a total of 7,658,629 person years).

Absolute and relative frequencies of prescribed antidepressants before and after publication of the guideline and their difference were calculated with 95% confidence intervals (normal distribution approximation). A multiple linear regression model for the frequency of guideline recommended prescriptions relative to a) the calendar year, b) an indicator variable of whether the calendar year fell before or after the introduction of the guideline (= 0 for 2008–2012, = 1 for 2014–2018), and c) an interaction between these two variables was determined, in order to check for a possible jump or a steeper increase after the guideline.

The analyzed health insurance fund data showed a rise in first prescriptions. The proportion of guideline recommended antidepressants increased after the guideline had been published. This trend also existed before the guideline, but the increase after publication reached significance. Overall it should be considered that contraindications or comorbidities may be an obstacle to the prescription of SSRIs; a completely guideline conform prescribing practice is therefore not expected for any point in time (particularly relevant comorbidities were, however, excluded from our analysis).

Possible alternative explanation models for the bigger increase in guideline conform antidepressants in 2014–2018 that might be discussed are:

Groundbreaking scientific publications and internationally published guidelines. SSRIs have been recommended as the medication of choice in children and adolescents for 20 years, and since 2005 this has been the case especially for fluoxetine (3);

Licensing changes: fluoxetine was approved in 2006 for the treatment of moderate and severe depressive episodes in minors and to date remains the only licensed SSRI for this indication (2).

The crucial factors of influence for the prescription of SSRIs as the medication of choice pre-date both observation periods. The bigger increase in prescription numbers according to guideline recommendations could be explained with the publication of the S3 guideline. 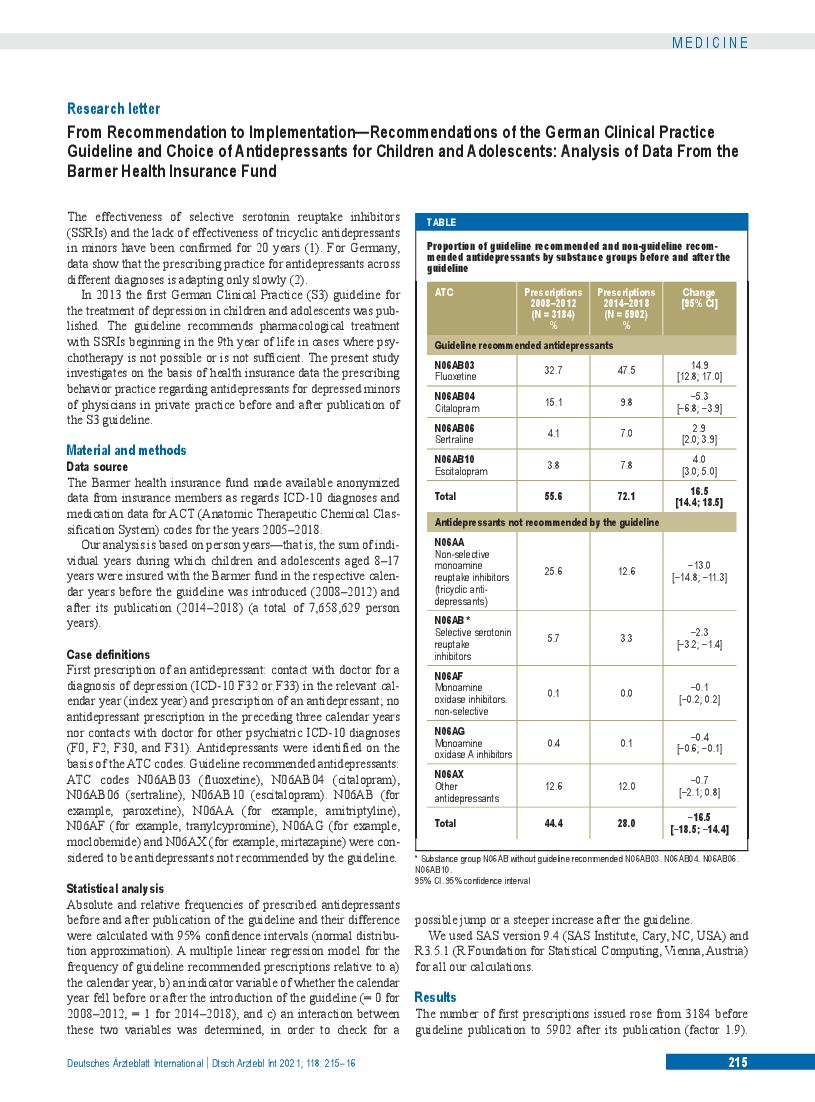