Most of the initial socioepidemiological studies of the COVID-19 pandemic are from the United Kingdom and the USA. The findings indicated in many cases increased risks for SARS-CoV-2 infection and severe COVID-19 disease courses in socioeconomically deprived population groups (1). In Germany, however, the observed pattern to date has been a different one. Nationwide analyses from the first SARS-CoV-2 wave in the spring of 2020 showed that in the socioeconomically advantaged regions of Germany, more laboratory confirmed SARS-CoV-2 infections had been notified than in socioeconomically deprived regions, and that this had been the case especially during the early outbreak (2). To date it has not been investigated to which extent this pattern also applies to—or was different in—the second SARS-CoV-2 wave in Germany since the autumn of 2020; this contribution will analyze this question. The results could contribute to identifying population groups for targeted infection protection and prevention measures in the pandemic.

The analyses are based on the COVID-19 cases notified to the Robert-Koch-Institute (RKI) in accordance with the Infection Protection Act (data as at 13 January 2021, 00:00 hrs), from which the incidence was calculated as the number of laboratory confirmed cases of SARS-CoV-2 infection per 100 000 population notified within one (calendar) week. The analyses were done for the period starting shortly before the second SARS-CoV-2 wave in Germany from week 36/2020 to week 1/2021 (31 August 2020 to 10 January 2021).

To analyze socioeconomic differences we linked the notification data with the German Index of Socioeconomic Deprivation (GISD) (3). The GISD measures the extent of socioeconomic deprivation in the populations in the different regions of Germany and is a multidimensional index including education, employment, and income indicators. Using a regional measure is necessary as the notification data do not include any individual socioeconomic characteristics. Data were linked at the level of the 401 rural districts and city districts, which on the basis of the index values for 2014 were classified into three categories: low (quintile 1), moderate (quintiles 2–4), and high deprivation (quintile 5). To compare the incidence rates between the deprivation categories directly, they were age standardized to the 2013 European Standard Population.

In the period under study, the RKI received notifications of 883 405 women and 781 608 men with laboratory confirmed SARS-CoV-2 infection, which included information on age, sex, and district. The weekly incidence for both sexes was low up to week 40 (28 September to 4 October 2020), it rose substantially afterwards, marking the start of the second wave of SARS-CoV-2 in Germany. Differentiated by socioeconomic deprivation, it was observed that the incidence initially increased more in less deprived districts than in districts with higher deprivation until week 45 (2 November 2020 to 8 November 2020) (Figure). Women and men in less deprived districts therefore were at higher risk of infection at the start of the second wave of SARS-CoV-2 than people of the same age in more deprived districts. During the course of the second wave, however, this pattern reversed, since the rise in less deprived districts decreased, whereas it continued in the more deprived districts. This observation was particularly pronounced for women. From week 40 (30 November 2020 to 6 December 2020), the incidence for both sexes was highest in the more deprived regions. This was also the case for the final weeks of 2020, when fewer cases were notified because of the holidays. The Table shows that this reversal of socioeconomic differences occurred in all age groups until notification week 1/2021 (4 January 2021 to 10 January 2021) and that the differences ultimately were largest in very old age.

Table
Incidence of a laboratory confirmed SARS-CoV-2 infection (cases per 100 000 population) during the second wave of SARS-CoV-2 by week of notification, age, and socioeconomic deprivation
Enlarge All figures

It should be borne in mind that the present analysis is an ecological study. Causality cannot be inferred from this, and an ecological fallacy cannot be excluded. Furthermore, confounders, such as testing behavior, may have contributed to the identified associations, if these also vary socially and over time.

The identified inequalities in the risk of infection with SARS-CoV-2 should be assessed on the background of pre-exiting health inequalities in the population, which imply serious social inequalities in the risk for severe disease courses of COVID-19 (4). Risk factors for severe COVID-19 courses include—in addition to older age—certain comorbidities, such as cardiovascular disorders, chronic pulmonary disorders, diabetes mellitus, or some cancers. Cigarette smoking and adiposity/obesity are also under discussion as risk factors. For many of these disorders and risk factors it has been proven that they are particularly common in socioeconomically deprived groups (4, 5), which is seen at the individual as well as the regional level (3). Increased infection risks in deprived groups can thus increase health inequalities. Deprived population groups should therefore be given particular consideration in the further development of infection protection and prevention measures, so as to promote health equity during and after the COVID-19 pandemic.

Table
Incidence of a laboratory confirmed SARS-CoV-2 infection (cases per 100 000 population) during the second wave of SARS-CoV-2 by week of notification, age, and socioeconomic deprivation
Enlarge All figures
Socioeconomic Differences in the Risk of Infection During... 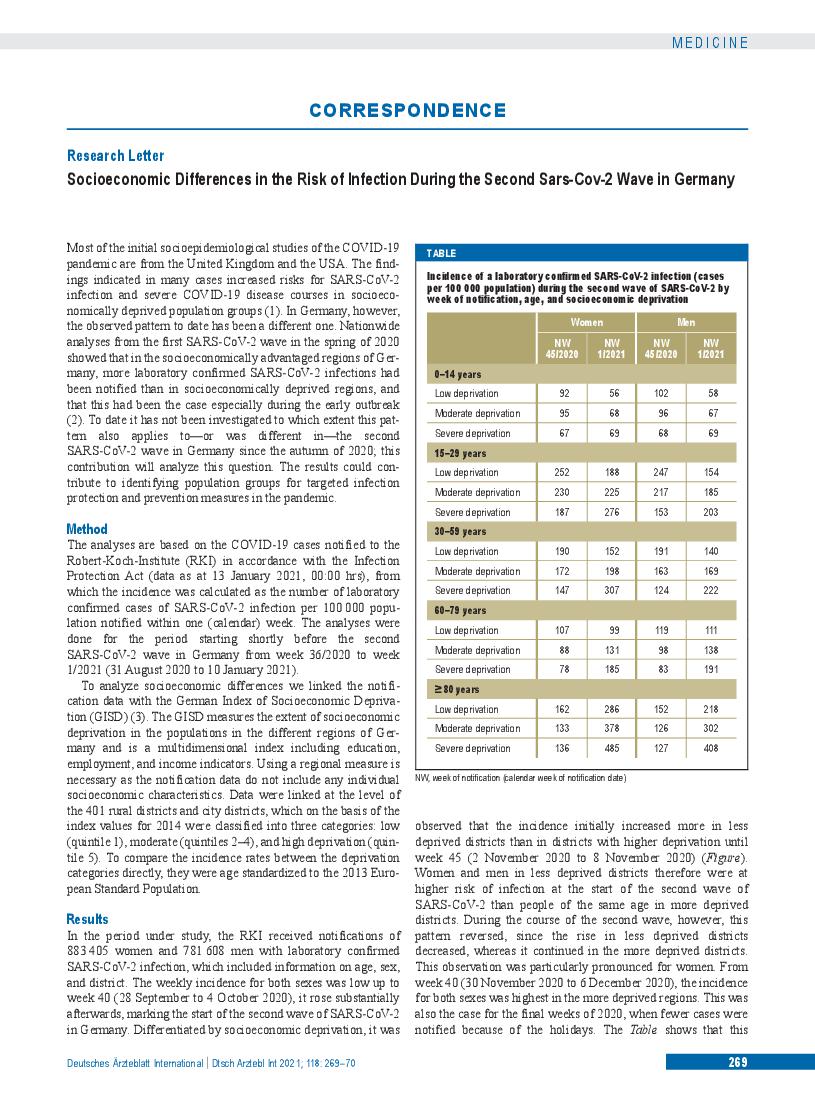