An 11-year-old boy (a soccer hobbyist) presented to our department with a 1-month history of knee pain in the absence of any trauma event that he could recall. There were no B symptoms and no evidence of inflammation or nocturnal pain. The boy reported that playing soccer the previous day had caused exercise-related pain in the right knee to recur. The diagnostic work-up showed a clinically unremarkable, freely movable knee with no knee joint effusion or signs of internal damage. However, there was pain on palpation of the proximal tibia. Radiography revealed a fracture of the proximal tibial diaphysis that was in the process of healing, with early periosteal reaction and dorsal callus formation consistent with a stress fracture (Figure a). After 4 weeks of avoidance of sport, rest, and analgesia, which represent the standard treatment—complemented if necessary by orthoses—the fracture was healed. A follow-up radiograph confirmed bone healing and showed marked callus formation and periosteal reaction (white arrows, Figure b). Stress fractures are rare in children/adolescents, but occur most frequently in the proximal diaphyseal/diametaphyseal tibia (sports involving sudden stops), followed by metatarsal fractures (endurance sports). From a pathophysiological perspective, repetitive trauma results in increased osteoclast activity that exceeds lamellar bone formation. The resulting resorption cavities ultimately lead to fractures. The fracture can initially only be visualized using magnetic resonance imaging, and on radiography only with a delay after healing.

Figure
a) Radiographs 4 weeks after symptom onset;
b) Follow-up radiograph at 6 weeks following diagnosis
Enlarge All figures
Stress Fracture of the Proximal Tibia in an 11-Year-Old Boy 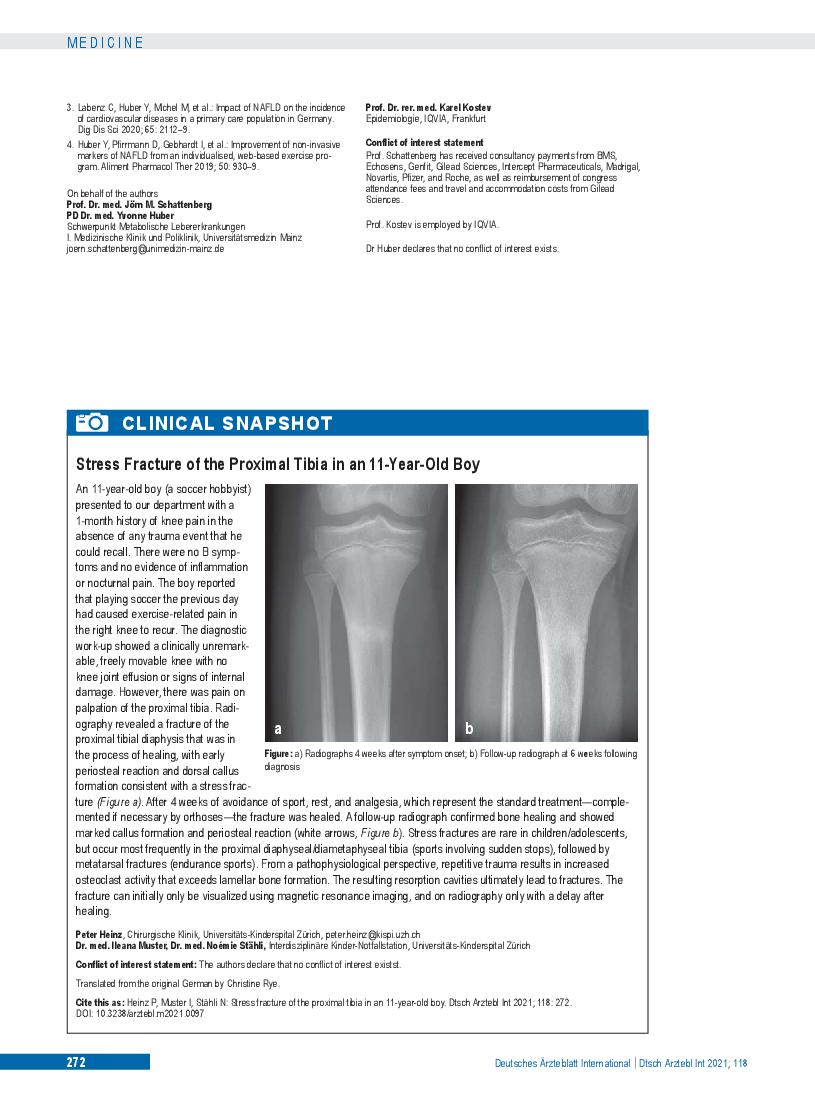