Incidence and Mortality of Proximal and Distal Colorectal Cancer in Germany

Trends in the Era of Screening Colonoscopy

Background: The use of colonoscopy has increased and colorectal cancer (CRC) incidence has decreased after the introduction of screening colonoscopy in Germany. However, it remains unknown to what extent progress has been achieved in the prevention of cancer in the proximal colon, distal colon, and rectum.

Conclusion: The results support the assumption that the increased use of colonoscopy has contributed to substantial reductions in the incidence of distal CRC incidence and the mortality from cancers in the entire colon and rectum.

Colorectal cancer (CRC) is among the most commonly occurring cancers, with approximately 1.9 million new cases and 0.9 million deaths globally in 2018 (1). Despite a recent decline in both incidence and absolute case numbers, CRC still accounts for close to 60 000 cases and 25 000 deaths per year in Germany (2). In contrast to most other cancers, a number of screening examinations are available (including fecal occult blood tests, flexible sigmoidoscopy, and colonoscopy). Both randomized controlled trials (RCTs) and observational studies have shown that these procedures have the potential to substantially reduce CRC incidence and mortality (3, 4, 5, 6).

Table 1 shows the history of CRC screening options in Germany. Starting in October 2002, colonoscopy was offered as a primary screening examination covered by statutory health insurance. Up to 2019 screening was opportunistic, i.e., there was no organized invitation system. In the period from 2010 to 2016, more than 50% of the population in Germany aged 50 years or over reported having had a colonoscopy in the previous 10 years. Approximately half were primary screening examinations and the other half were carried out for diagnostic purposes (7).

We have already shown that CRC incidence declined substantially between 2003 and 2012, the first decade during which screening colonoscopy was offered (8). In this article, we have updated our previous analysis of trends in CRC incidence (up to 2016) and mortality (up to 2018). We paid particular attention to trends in the incidence of cancer in different subsites of the colon and rectum, as there is uncertainty and ongoing debate whether colonoscopy is equally effective in preventing proximal and distal CRC. We additionally analyzed trends in stage distribution at the time of diagnosis since the introduction of screening colonoscopy.

Estimates of the national incidence of CRC (ICD-10 codes C18, C19, and C20) in the period 2000 to 2016 were made on the basis of figures from the German Center for Cancer Registry Data (ZfKD) (2). The mortality rates for the years 2000 to 2018 were derived from data from the Federal Health Monitoring System based on cause-of-death statistics (9). Furthermore, we used anonymized data from the individual cancer registries (eTable 1) to analyze trends in stage distribution between 2000 and 2016.

We calculated age-standardized incidence and mortality rates among men and women on the basis of the European Standard Population for 1976 and estimated average annual percent changes (AAPCs) using Joinpoint regression.

Analyses of CRC mortality were also conducted for all sites combined (C18–C20) and for colon cancer (C18) and rectal cancer (C19–C20) separately.

Further details of the evaluation techniques can be found in the eMethods.

eTable 2
Average annual percent change in incidence of and mortality from colorectal cancer in Germany, stratified by sex
Enlarge All figures

We found large declines in CRC incidence and mortality for the periods concerned, most pronounced in the age groups for which screening colonoscopy was offered. While the incidence of rectal cancer and in particular distal colon cancer decreased strongly, for cancers in the proximal colon no reduction in incidence was observed over time for men and only a moderate reduction for women. Nevertheless, a major shift toward detection at earlier stages was observed for proximal cancers.

Comparison with data from RCTs and observational studies

In Germany, the use of colonoscopy has increased considerably since the introduction of screening examinations in 2002 (7, 24, 25). The observed downward trends in incidence and mortality were particularly pronounced for those aged ≥ 55 years, to whom screening colonoscopy was offered. This finding is in line with evidence from randomized trials and observational studies of endoscopic screening. Moreover, we also found a reduction, albeit less pronounced, in cumulative CRC risk in persons < 55 years. This may be explained by increasing use of colonoscopy in the age group 40–54 years, particularly among those with a family history of CRC (26).

Furthermore, the substantial differences in incidence trends between cancers of the distal colon and proximal colon support suggestions of higher effectiveness of screening colonoscopy in preventing distal than proximal cancers. Several factors may contribute to the lower effectiveness of colonoscopy in the proximal colon. These include, for example, lower detection rates of proximal neoplasms, and a higher proportion of serrated lesions in the proximal colon; the latter are more difficult to detect and tend to develop more rapidly into CRC than adenomas, the most frequently occurring precursors of CRC (27, 28).

As for stage distribution, there was a trend towards an increase in the proportion of stage I cancers. At the same time, the proportion of stage IV cancers decreased. This stage migration was most pronounced for proximal cancers. Earlier detection may therefore have contributed to the reduction of mortality from proximal colon cancer, despite the absent or only modest reduction in the incidence of proximal colon cancer. Unfortunately, the available mortality data do not allow reliable distinction between proximal and distal CRC. However, the marked reduction in overall colon cancer mortality (ranging from 35% to 45% in all age groups between 55 and 84 years) is unlikely to have been achieved if mortality from proximal colon cancers (which accounted for the majority of colon cancers in 2016) had not declined as well. Nevertheless, given the high proportion of cases with missing or unknown stage (38–56%), the findings on trends in stage distribution need to be interpreted with caution. Furthermore, stage migration (particularly from stage II to stage III) may have played a part, due to a more extensive scrutiny of lymph nodes in recent years (29). In our study, a considerable increase in stage III rectal cancers was particularly striking.

The role of other factors

Along with screening colonoscopy, the increased use of diagnostic colonoscopies may have played a role in the observed trends. Equally, the guaiac-based fecal occult blood test (gFOBT) offered since 1977, may have contributed to the reduction in mortality. Furthermore, the trends in incidence may have been influenced by changes in the prevalence of protective factors such as regular intake of aspirin (30, 31) and physical activity (32) and risk factors such as smoking, alcohol consumption, and overweight (32). It is, however, highly unlikely that these factors have played a major role, as such a pronounced decrease in incidence would have required drastic positive shifts in these factors, for which there is no evidence (33, 34). On the other hand, advances in CRC treatment (35) may have contributed to the decline in CRC mortality, particularly in view of the fact that mortality decreased more sharply than incidence.

To our knowledge, this study represents the first comprehensive nationwide analysis of trends in CRC incidence and mortality in Germany, as well as stage distribution by sex, age, and tumor site, since Germany became one of the first countries to introduce colonoscopy as a primary screening test in 2002.

In evaluating the study, however, some limitations need to be borne in mind. First, due to legal considerations the cancer registry data could not be linked with the data from the screening colonoscopy program. This precluded comparative analysis of CRC incidence, mortality, and stage distribution between those who underwent screening colonoscopy and those who did not. Second, since over 60% of deaths from colon cancer were registered as overlapping or unspecific neoplasms, we were unable to differentiate proximal from distal cancers when analyzing mortality. Finally, in a high proportion of cases—which steadily decreased over time—the stage was missing or unknown. Analyses of stage-specific incidence were therefore not conducted as they would have been highly biased.

Our study shows substantial decreases in CRC incidence (between 2000 and 2016) and CRC mortality (between 2000 and 2018) in Germany. Both detection and removal of precancerous lesions and early detection of cancers on either screening or diagnostic colonoscopy, which are now performed in a majority of older adults (36), are likely to have made major contributions to the observed trends. The different patterns in incidence between the different tumor sites suggest that colonoscopies have been more effective in detecting and removing precancerous lesions in the distal colon and rectum than in the proximal colon. Enhanced awareness on the part of endoscopists and further improvement of their training in the detection of precancerous lesions (36), including serrated lesions in the proximal colon, allied with advances in technology, may help to strengthen prevention of proximal cancers in the future. Even stronger reductions of CRC incidence and mortality could be achieved, however, if the existing screening options, i.e., fecal immunochemical tests or colonoscopy, were taken up by a larger proportion of the target population (25, 37, 38). This could be most effectively achieved by an organized screening program combining readily understandable information with low-threshold access to effective screening options (39, 40).

eTable 2
Average annual percent change in incidence of and mortality from colorectal cancer in Germany, stratified by sex
Enlarge All figures
Incidence and Mortality of Proximal and Distal Colorectal... 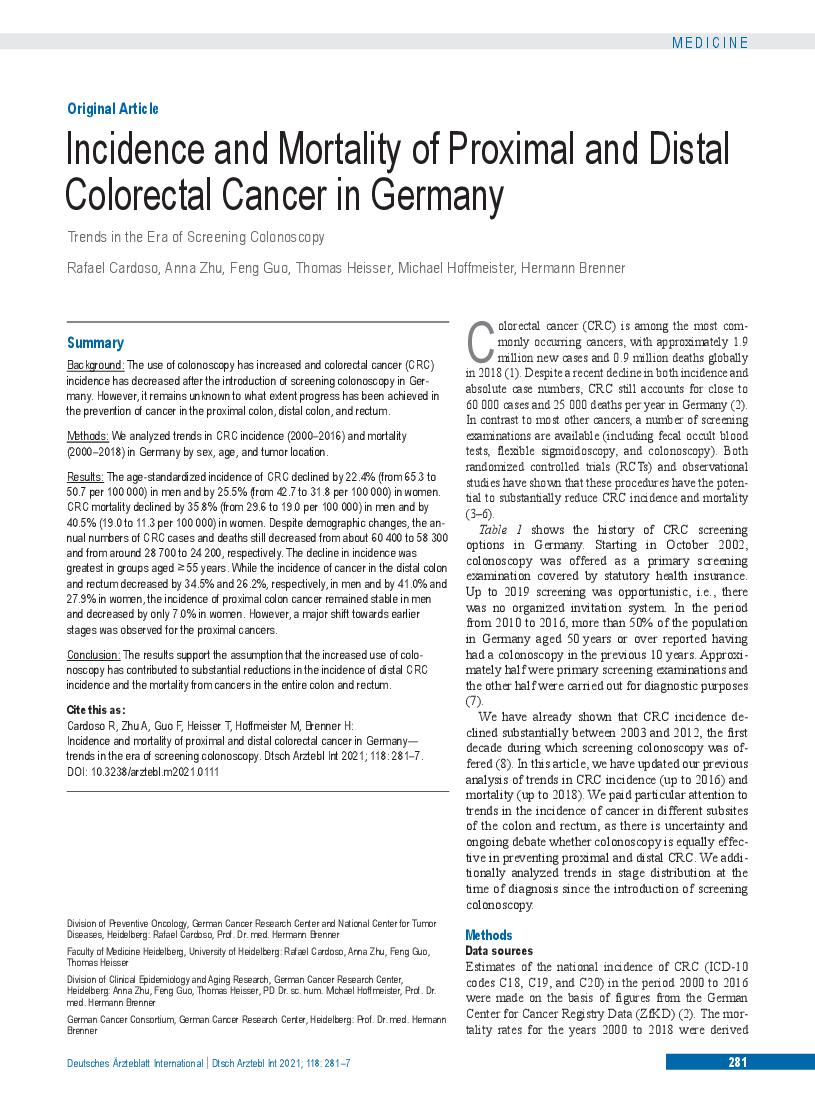