The mortality of patients with COVID-19 varies substantially from region to region. In a German observational study of 10 021 patients, the death rate was 22% for hospitalized patients and 53% for ventilated patients (1). Lower mortality might be expected in the second wave due to increasing experience and improved treatment options. Because no detailed comparative data are available on patient characteristics and treatment in identical settings in Germany, we set out to compare the mortality and other clinical endpoints among first- and second-wave COVID-19 patients treated in hospitals in and around Rosenheim, regarded as a first-wave hotspot.

Adults resident in the region of Rosenheim who were admitted to hospitals of the RoMed Group with SARS-CoV-2 infection were registered in a prospective multicenter database (CovidDB; ClinicalTrials.gov identifier: NCT04344171; www.covid-db.com). This project was approved by the ethics committees of the University of Giessen and Ludwig-Maximilians University of Munich. The first wave was defined as the period 1 March 2020 to 30 June 2020, the second wave as 1 October 2020 to 31 January 2021. Inclusion was confined to patients with PCR-confirmed SARS-CoV-2 infection. The characteristics recorded comprised anthropometric, respiratory, and clinical parameters, laboratory findings at the time of admission, and comorbidities. The treatments documented were anti-inflammatory (especially systemic steroids), antiviral, antibiotic, anticoagulant (prophylactic, therapeutic) medications and inhibition of thrombocyte aggregation, together with nasal high-flow oxygen (NHF), non-invasive ventilation (NIV), invasive mechanical ventilation, ECMO, and dialysis. Management and treatment procedures adhered to in-house standards based on German national recommendations. The defined endpoints for the whole cohort were length of hospital stay, length of intensive care unit stay, duration of ventilation, and vital status. Patients with and without intensive treatment were analyzed separately, as were those with and without ventilation. The latest admissible date of discharge from acute hospital care was 26 February 2021. The waves were compared using Fisher’s exact test and the Mann–Whitney U test.

Five hundred twenty-six patients with SARS-CoV-2 were hospitalized during the first wave, 623 during the second wave; five patients declined to participate in the study and were not included for analysis. The two groups differed in age (median 73 [range 23–97] vs. 75 [range 18–99] years; p = 0.041) and in Charlson score, but showed no differences in sex distribution, symptoms, vital signs, laboratory findings, and blood gases at the time of admission. Medications, respiratory support, and the clinical course are summarized in the Table, while the mortality figures are shown in the Figure. Six patients were still being treated at the closing date of the study, but even if they had died the mortality would still have been lower in the second wave.

Table
Comparison of patients in the first and second waves: medication, respiratory support, and clinical course
Enlarge All figures

In this study of patients treated in non-university hospitals, both overall and intensive care mortality were lower in the second wave, similar to the findings of a study in the Netherlands (2). In contrast, a French study (3) and a German survey of registry data (4) found no improvement in intensive care mortality or in the prognosis of ventilated patients, although the proportion of intensive care admissions fell from 30% to 14%. Given the detailed characterization of the patients in our study, the observed reduction in mortality can hardly be attributed to group differences. In fact, both median age and the Charlson score were slightly higher in the second wave. The study design does not permit any conclusions as to causal links between treatment strategies and clinical course. An important part may have been played by the increased frequency of the administration of systemic steroids in the second wave, particularly in patients who required oxygen. The use of remdesivir and hydroxychloroquine, however, is unlikely to have made any meaningful contribution to the difference in mortality. Notably, NHF and NIV were used more often. This could have led to a reduction in transfers to intensive care and intubations (4). Correspondingly, NHF has become a regular component of the therapeutic algorithm for acute hypoxemia and COVID-19 (5). Moreover, intermittent prone positioning of alert patients under mild sedation may have been effective. Mortality was also lower for invasively ventilated patients in the second wave, despite the absence of essential modifications in ventilation strategy, with the exception of low end-expiratory pressure in patients with high lung compliance. Besides the growing experience in the management of COVID-19 patients, a role may have been played by intensified anticoagulation. On the other hand, high stress at times when several intensive care patients were admitted simultaneously may have contributed to the higher mortality in the first wave. In a Cox regression analysis, carried out for orientation, the difference in mortality risk was only marginally eliminated after adjustment for age, laboratory, and respiratory parameters, left heart failure, steroids, anticoagulation, intensive care treatment, intubation, NHF, NIV, and treatment limitations (HR 0.683; 95% confidence interval [0.462; 1.012], p = 0.057). Overall, the lower mortality in the second wave is most likely explained by a comprehensively improved treatment concept that is difficult to operationalize, including anti-inflammatory and anticoagulant medication and reduced intubation rate. The fact that this was a relatively small local study may limit the generalizability of the results, but on the positive side, the catchment area, sites, physicians, and resources remained stable. In conclusion, hospitalized patients in a region of southern Germany hit hard by the first wave of COVID-19 showed improved survival in the second wave. This was particularly true among those who required intensive care and mechanical ventilation. The differences correspond to changes in medication practice, more frequent use of NHF and NIV, and a lower intubation rate.

Table
Comparison of patients in the first and second waves: medication, respiratory support, and clinical course
Enlarge All figures
Comparison of the First and Second Waves of Hospitalized... 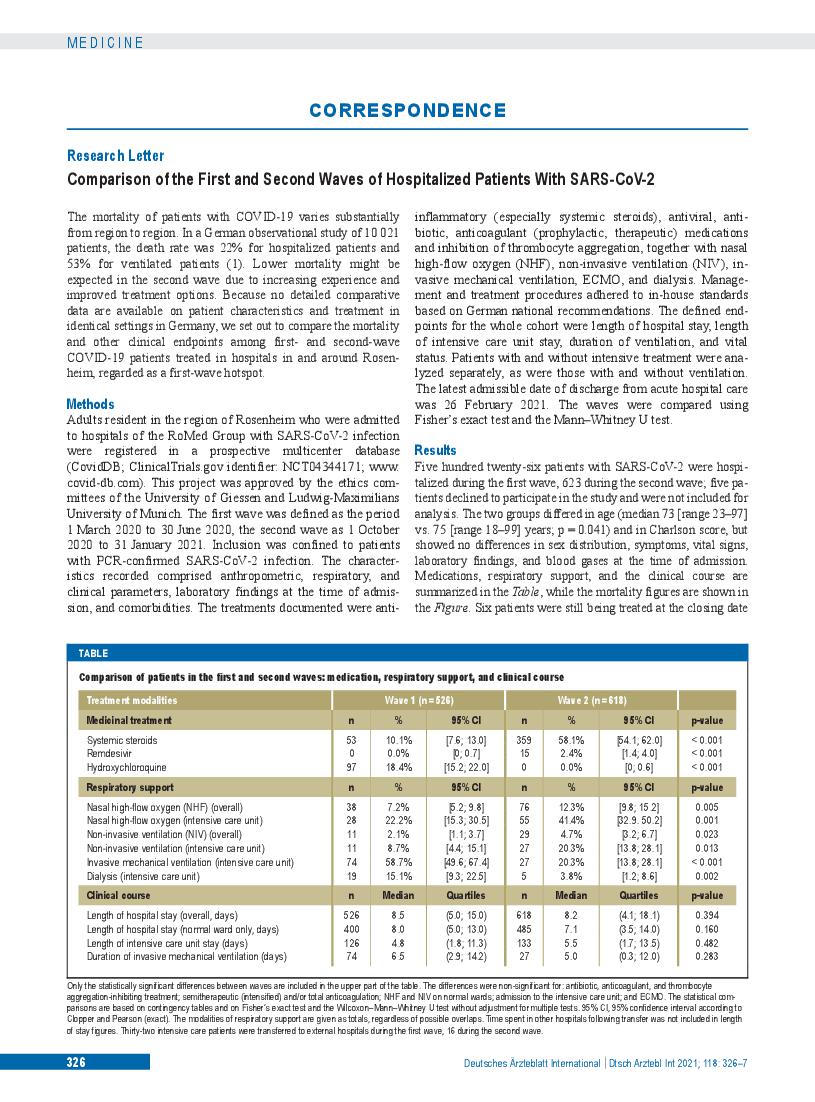