In the German federal state of Saxony, the COVID-19 pandemic began with the confirmation of the first case on 2 March 2020. A state-wide “lockdown” featuring a curfew and contact restrictions was imposed from 23 March to 19 April 2020. Research in other countries has shown that the pandemic has had a negative impact on the diagnosis and treatment of cancer (1, 2).

Clinical cancer registries have a legally defined mandate to document the diagnosis and the course of treatment of all malignant diseases. Physicians treating patients found to have cancer are obliged to report all cases, as are pathologists. There are four separate registries in Saxony. On the basis of these data, our aim was to explore how the number of new cases of cancer changed during the first wave of the COVID-19 pandemic.

All cases diagnosed in the period 2017–2020 and reported to Saxony’s clinical cancer registries (ICD-10 C00–C96 without C44, D00–D09 without D04) were included for analysis. The patients had to be at least 18 years old at the time of diagnosis with their principal residence in Saxony. For each calendar week from January to September 2020, we related the number of diagnoses observed with the number of cases expected. The number of cases expected was calculated on the basis of the observed weekly case numbers in the years 2017–2019 by means of dynamic harmonic regressions with ARIMA errors (ARIMA, autoregressive integrated moving average).

Comparison of the expected and observed reports of new cancers showed a marked decrease during the lockdown. This continued—albeit to a lesser extent—in the following 2 months (Figure). The number of new cases registered was particularly low in week 15 (6–12 April), at 55.1% of the expected total. Over the observation period as a whole, the documented number of new cancers amounted to 93.6% of the total expected.

Looking at the individual regions, the catchment area of the Zwickau clinical cancer registry (CCR) stands out; this area includes the districts Vogtlandkreis, Erzgebirgskreis and Zwickauer Land, where infection rates were particularly high. Case numbers stayed low—for some cancers markedly so—after the end of lockdown. Overall, the number of new cancers reported to the Zwickau CCR (88.4% of expected) was lower than at the other three registries (Chemnitz 97.5%, Dresden 94.1%, Leipzig 91.7%).

Various factors may explain the observed decrease in diagnosed cases. One possibility is that patients made fewer visits to physicians because they feared infection or did not want to impose an additional burden on the healthcare system. Utilization of services funded by statutory health insurance fell sharply in early March 2020 and did not begin recovering until late May (3). Furthermore, it is feasible that fewer patients were referred for further diagnostic workup, or that diagnostic examinations were postponed. Finally, the restriction of cancer screening services may have contributed to the decrease in diagnosed cancers. In the spring of 2020, mammography, screening colonoscopy, and skin cancer screening were offered to a considerably reduced extent or not at all (4).

The numbers of cases diagnosed recovered somewhat in the summer (weeks 29–35), but not enough to compensate entirely for the reduction earlier in the year. By the end of September, the total number of cancers for the year so far was 6% less than expected.

To our knowledge, this is the first comprehensive analysis of the impact of the COVID-19 pandemic on CCR reporting in Germany. An evaluation of data from selected pathology reports in the federal state of North Rhine–Westphalia (5) showed that the number of cases documented in April 2020 was lower than in any other month from January 2019 to September 2020. CCR data have the advantages that they are practically complete and are documented according to international principles, meaning that the data quality can be assumed to be very high. It cannot be excluded, however, that at least a portion of the observed decrease in diagnoses is due to a change in the reporting behavior of the service providers. The increased organizational demands on hospitals and physicians’ offices due to the pandemic may have led to diagnoses being reported to the registries late or not at all. However, the chosen observation period enabeled the coverage of late registrations, so no great amount of bias is plausible. Reliable statements going beyond week 40 are not yet possible. Experience has shown that cases diagnosed in the last quarter of the year are reported to the cancer registries up to several months later, and this tendency has probably been potentiated by the pandemic in 2020. Analysis without taking account of delayed reports would bias the results.

To what extent, if at all, the pandemic has also exerted an effect on treatment, the outcome thereof, and long-term patient survival remains unknown pending further comprehensive analyses of cancer registry data, billing figures, and systematic surveys of service providers.

This project was partly funded by tax revenues on the basis of the budget enacted by the State Parliament of Saxony.

Figure
New cancers reported to the clinical cancer registries in Saxony
Enlarge All figures
Documented New Cases of Cancer in the Clinical Cancer... 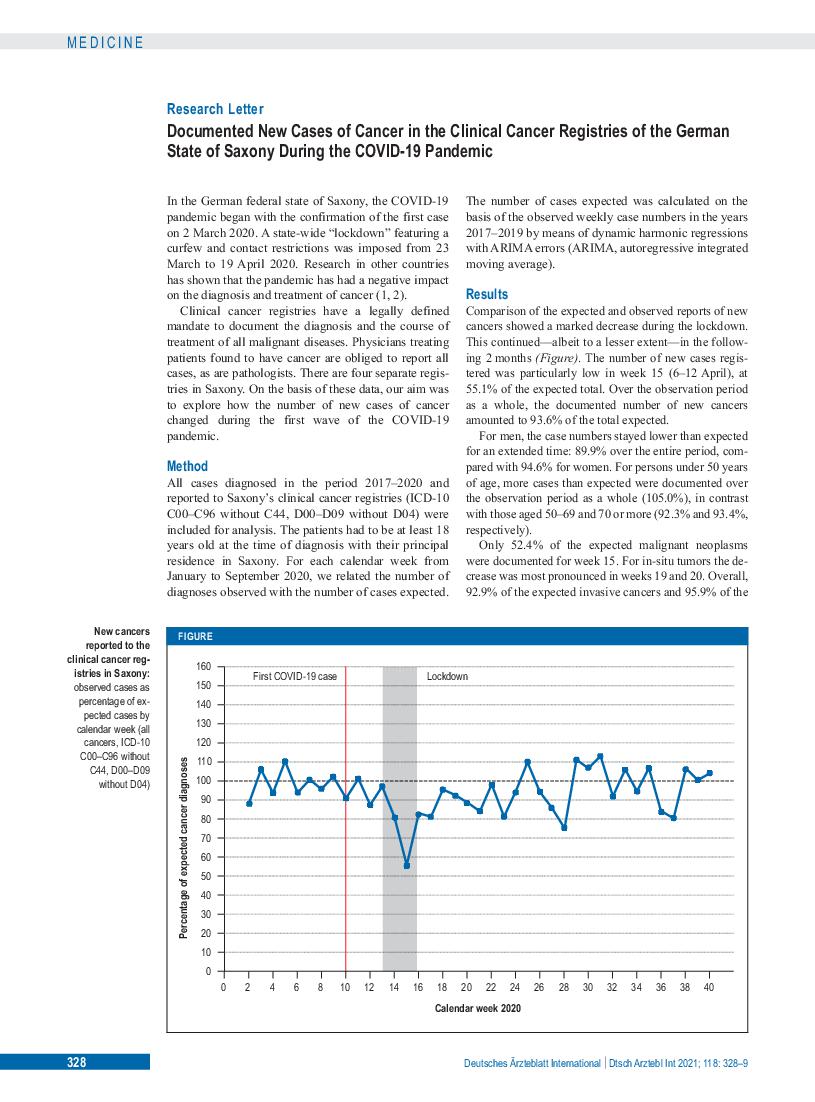