Background: In Germany, the 12-month prevalence of methamphetamine use among persons aged 15 to 34 is 1.9%. An increasing number of newborns are being born after a prenatal methamphetamine exposure (PME). In 2014, in the German state of Saxony, approximately four out of 1000 newborns were affected.

Methods: This systematic review (Prospero registration number CRD42017060536) includes publications that were published between January 1990 and November 2019. The purpose was to determine the effects of PME on the peri- and neonatal condition of the affected children and on their further long-term development. Observational studies with a control group were included in the review and examined for their methodological quality.

Results: 31 publications, which dealt with two prospective and six retrospective cohort studies, were included in the review. The studies involved a total of 4446 mother–child pairs with PME, compared with 43 778 pairs without PME. A meta-analysis revealed that PME was associated with, among other findings, lower birth weight (SMD = –0.348; 95% confidence interval [−0.777; 0.081]), shorter body length (SMD= –0.198 [−0.348; −0.047]), and smaller head circumference (SMD= –0.479 [−1.047; 0.089]). Some differences between the groups with and without PME persist into the toddler years. Moreover, children with PME much more commonly display psychological and neurocognitive abnormalities, which are more severe in children growing up in problematic surroundings (discord, violence, poverty, low educational level of the parent or caregiver). A limitation of this review is that not all studies employed an objective or quantitative measure of methamphetamine use.

Conclusion: The documented effects of PME on child development necessitate early treatment of the affected expectant mothers, children, and families. Emphasis should be placed on structured and interdisciplinary preventive measures for methamphetamine use.

Compared to the European Union (EU), Germany (D) holds a middle-ranking position with regard to the lifetime prevalence of methamphetamine (MA) use in the 15 to 64 years age group (D: 3.6%, EU: 3.7%); in the twelve-month prevalence among the 15– to 34-year-olds, Germany occupies a top position (D: 1.9%, EU: 1.0%) (1). Given its high addictive potential and its popularity especially among young adults, MA is gaining increasing attention among the substances regulated by the German Narcotic Drugs Act (Betäubungsmittelgesetz, BtMG) (2). Consequently, the 2019 report of the Drug Commissioner of the Federal Government of Germany highlights above all the need for prevention (2).

MA use is associated with high-risk sexual behavior and early pregnancies (3). Reliable data on the prevalence of amphetamine use during pregnancy are scarce. In an English study (N = 149), urine of pregnant women was tested for substances, including amphetamines; positive amphetamine results were found in n = 5, corresponding to an absolute share of 3.3% and about one-third (31.3%) of the women who tested positive for drugs (4). In the state of Saxony, the number of hospitalized newborns with prenatal MA exposure (PME) significantly increased over a period of four years from below 1/1000 newborns (2010) to about 4/1000 newborns (2014) (5).

In recent years, children with PME have been followed up systematically. These studies focused on the effects of PME on the physical and neurocognitive development in early childhood. Some of these studies were considered in the clinical practice (S3) guideline “Methamphetamine-related Disorders“ (6). The aim of this review is to systematically summarize the available data on the effects of PME on child development and to conduct a meta-analysis where appropriate.

This systematic review addresses the following question (7): What are the effects of prenatal MA exposure on the peri- and neonatal condition and long-term development of the affected children?

The inclusion criteria were defined based on this research question and are listed in eTable 1. Neuroimaging studies were not included.

The review protocol was registered in the International Prospective Register of Systematic Reviews (PROSPERO) database (ID: CRD42017060536). Detailed information about the search method and data extraction is presented in the eMethods 1 section, the search strings in the eMethods 2 section.

The review results were reported in accordance with the „Preferred Reporting Items for Systematic Reviews and Meta-Analyses“ (PRISMA) statement (9).

Descriptive information about the studies

The study by van Dyk et al. (10) as well as the Infant Development, Environment, and Lifestyle (IDEAL) study (which is covered in the publications [11–34]) are prospective cohort studies. Furthermore, new subpopulations were sampled from the IDEAL study population to address specific research questions. Consequently, overlapping may occur between mother-infant pairs. For each study time point and outcome, only the respective first IDEAL publication was used as the basis. This results in a study duration of up to seven and a half years (16, 32). Across all 25 cohort (sub-) studies, 3729 mother-infant pairs with PME were compared to 8717 pairs without PME (eTable 2).

Effects of PME, both cognitive and physical, were noted in the various phases of child development (Figure 2).

Effects of PME on postnatal condition

Pregnant women with MA use had their first prenatal visit five weeks later than pregnant women without MA use (26). Infants with PME were less mature at birth; in five of six studies, the gestational age of newborns with PME was significantly lower compared to newborns without PME; the range of age differences was 0.3 to 2.2 weeks (26, 37, 38, 39, 40). The effect of PME on gestational age, as revealed in the meta-analysis, is shown in eFigure 1 based on the standardized mean difference (SMD; SMD = −0.613; 95% confidence interval: [−1.448; 0.222]).

The effects of PME on intrauterine growth were noticed at birth. Neonates with PME were found to have lower values than the control group in six studies for:

Effects of PME on neurocognitive and motor development

At various points in time, evidence of negative effects of PME on cognitive development was found. At the age of 4 years, children with PME performed poorer on social ability and hand and eye coordination and had a lower overall performance on the Griffiths Mental Development Scales; in contrast, these children had no significantly greater difficulties with locomotion, practical reasoning as well as hearing and speech (10). Furthermore, at the age of 7.5 years, children with PME had greater cognitive deficits, such as learning and concentration difficulties (16). These results persisted even after adjusting for socioeconomic status and maternal educational attainment (10, 14, 16).

Effects on attention were observed at the age of 5.5 years. Children with PME had a higher reaction time in the Connors‘ Continuous Performance (CCP) test for the diagnosis of attention-deficit/hyperactivity disorder (ADHD) (14) and were less accurate in their reactions in the Dots test (15). This also held true after adjustment for socioeconomic status and maternal education (15). The reaction time according to the CCP test was statically significantly higher for children with frequent prenatal ME exposure (>3 times per week) (g = 0.097 [−0.331; 0.525]). In addition, they made more mistakes in the test (g = −0.5551 [−0.984; −0.119]) (15).

At the age of one year, children with PME performed poorer in grasping tasks (28); one study showed lower scores in the Psychomotor Development Index—an effect that remained stable until two years of age (34). Using the Mental Development Index, however, no difference between children aged 1 to 3 years with PME and without PME was found (28, 34).

Other effects of PME

Galland et al. found no significant effects of PME on the sleep behavior of newborns (17). Furthermore, the behavioral effects observed in the later life of these children were inconclusive and overall more sporadic (eBox 2). In eTable 3, all effects, both statistically significant and non-significant, are presented, including the direction of the effect.

Results of the quality assessment

The following methodological shortcomings were considered in the summary assessment of study quality (eTabelle 2):

Further details on study quality are presented in eBox 3.

In recent years, the effects on PME on child development were investigated in various studies and are summarized in this review.

Based on case reports with cerebral imaging findings, effects of PME on the development of central brain areas, such as the superior and posterior corona radiata, could already be assumed (e1). The results of the analyzed cohort studies illustrate the clinical relevance of PME. For example, children with PME had a smaller head circumference at birth and during the first years of life; in addition, they were more commonly affected by neurocognitive problems. Since not all studies adequately adjusted for additional tobacco and alcohol consumption as well as low socioeconomic status—which have a negative impact on long-term development—, it is not possible to attribute the effect on PME alone in all cases. Similar effects have already been described for prenatal exposure to other drugs (e2). Newborns had a smaller head circumference after exposure to methadone and marihuana, while exposure to cocaine and methadone affected cognitive and motor development (e3). With regard to functional consequences of PME on child behavior, the available studies are inconclusive: At the age of five years, mostly an internalizing behavior was observed, whereas at the age of seven years externalizing behavior was predominant (eTable 3).

Implications for prevention and management

When the setting in which a child grew up was considered in the analyses, it was found that a social environment characterized by quarrelling, violence, poverty, and low educational attainment of the primary caregivers was associated with a more pronounced manifestation of the effect of PME on behavioral development later in life (e4), even after adjustment for socioeconomic status and educational attainment, as in the IDEAL publications (e5). This is relevant given that many of the affected mothers are single moms, have a lower social status and are more inclined to depression or lack of perspective (e6).

In order to prevent MA consumption during pregnancy and to ensure that children with PME grow up in a stable social environment, withdrawal therapy with the goal of maternal abstinence should be started as early as possible in pregnancy (e7) and include interventions addressing individual reasons for ME use (e8). From the study data, risk profiles (e.g. social status and depression) can be derived and used to approach expectant mothers (e9). Multi-professional care networks can help identify drug use in pregnant women early on and convince them of the need for screening. (e10), as this is the ideal setting for withdrawal interventions (e11). Initial results of an evaluation of an integrated care system for mother-child pairs with PME have shown that a bond between mother and child can be established in a perinatal center (e11). However, studies evaluating the effectiveness of an MA withdrawal program during pregnancy and guidelines on how to conduct such a program are missing (e12).

This registered systematic review was assessed for completeness using the AMSTAR check list. In addition, the PRISMA checklist was used for the preparation and reporting of this review (e13). Yet, there are still some methodological limitations of this review which should be highlighted. Not all studies established the exposure to MA in an objective, quantified manner. Furthermore, specific effects of PME were not detected in all IDEAL cohorts to the same extent. Some of the methodological limitations (eBox 4) resulted in high heterogeneity (I²) on the calculated total effects of PME (Figure 3).

Acknowledgement
The preparation of the manuscript was in part supported by the German Federal Ministry of Health (BMG, Bundesministerium für Gesundheit) (funding code: ZMVI1–2517DSM212). The authors thank Solveig Pohl and Christin for their support with the quality assessment. 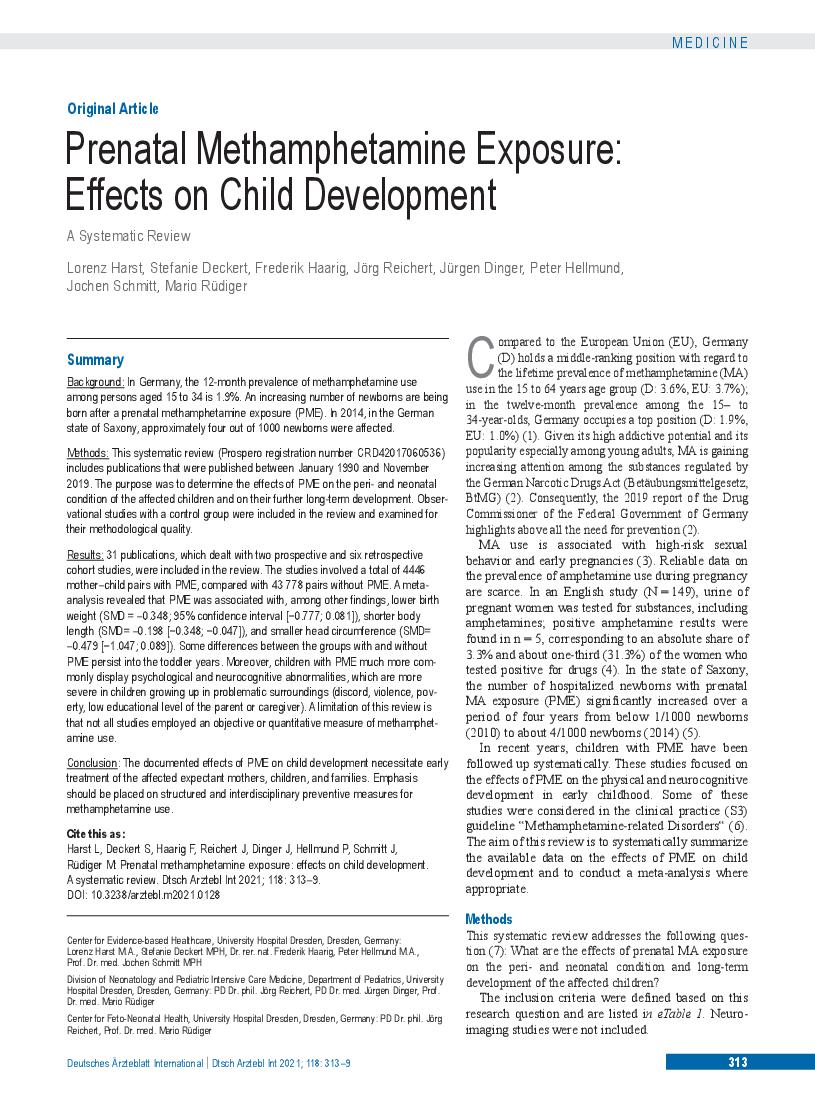