Background: Regional deprivation can increase the risk of illness and adversely affect care outcomes. In this study, we investigated for the German state of Rhineland–Palatinate whether spatial-structural disadvantages are associated with an increased frequency of ischemic stroke and with less favorable care outcomes.

Methods: We compared billing data from DRG statistics (2008–2017) and quality assurance data (2017) for acute ischemic stroke with the German Index of Multiple Deprivation 2010 (GIMD 2010) for the 36 districts (Landkreise) and independent cities (i.e., cities not belonging to a district) in Rhineland–Palatinate using correlation analyses, a Poisson regression analysis, and logistic regression analyses.

Results: The age-standardized stroke rates (ASR) ranged from 122 to 209 per 100 000 inhabitants, while the GIMD 2010 ranged from 4.6 to 47.5; the two values were positively correlated (Spearman’s ρ = 0.47; 95% confidence interval [0.16; 0.85]). In 2017, mechanical thrombectomies were performed more commonly (5.7%) in the first GIMD 2010 quartile of the regional areas (i.e., in the least deprived areas) than in the remaining quartiles (4.2–4.6%). The intravenous thrombolysis rates showed no differences from one GIMD 2010 quartile to another. Severe neurological deficits (National Institutes of Health Stroke Scale ≥ 5) on admission to the hospital were slightly more common in the fourth quartile (i.e., in the most deprived areas), while antiplatelet drugs and statins were somewhat less commonly ordered on discharge in those areas than in the first quartile.

Conclusion: These findings document a relationship between regional deprivation and the occurrence of acute ischemic stroke. Poorer GIMD 2010 scores were associated with worse care outcomes in a number of variables, but the absolute differences were small

Regional deprivation, i.e., deficiencies in material and social resources at the regional level, can have substantial negative consequences for the health status of different segments of the population and is associated with a large number of diseases (1, 2). Multidimensional indexes of multiple deprivation (IMD) have proved to be suitable instruments for the analysis of regional inequalities in health. In our country, the German Index of Multiple Deprivation (GIMD) has been used to analyze a number of epidemiological issues and questions of healthcare research (2).

At the level of the individual and at the level of region of residence, unfavorable socioeconomic conditions are associated with an elevated risk of stroke (3). A person’s socioeconomic circumstances as early as childhood are linked to their risk of stroke later in life (4, 5, 6). Furthermore, studies have shown connections between regional deprivation and poorer care after a stroke (7, 8). No research into regional deprivation, stroke incidence and stroke care has yet been carried out in Germany.

We used data from diagnosis-related groups (DRG) statistics (9) and the “Acute Stroke” quality assurance project in the German state of Rhineland–Palatinate to investigate whether multiple deprivation at the level of districts and independent cities (i.e., cities not belonging to a district) in this state correlates with the rate of hospital admissions for treatment of ischemic stroke and with elements of a lower quality of care for acute ischemic stroke.

The state of Rhineland–Palatinate is made up of 12 independent cities and 24 districts (hereinafter referred to collectively as districts). We analyzed the DRG data of all patients resident in Rhineland–Palatinate who were assigned a main diagnosis of ischemic stroke (ICD-10 code I63: cerebral infarction) in the period 2008 to 2017. Patients with “discharge code 06” (transfer to another hospital) were excluded to avoid multiple documentation. For patients admitted to more than one hospital, only the last hospital was counted. The code I63 includes patients with a first or subsequent ischemic stroke. Recurrent strokes during inpatient treatment were coded as secondary diagnoses and were not included for analysis. Treatments in stroke units (code 8.981/8–98b in the German catalog of operations and procedures [OPS]) and recanalization therapy (systemic thrombolysis: OPS 8–020.8; mechanical thrombectomy: OPS 8–836.80) were identified from the DRG data.

Quality assurance procedures for all inpatients with acute stroke have been mandatory in Rhineland–Palatinate since 2006. The details documented are age, sex, postal code of place of residence (since 2017), vascular risk factors, previous strokes, investigation and treatment delays, diagnostic and therapeutic procedures, secondary prophylactic measures, severity of neurological deficit (National Institute of Health Stroke Scale, NIHSS), and degree of functional deficit (Barthel index) (10). The districts were identified on the basis of the postal codes; if the same postal code was used for more than one district, the patient was assigned to the district with the higher population. A total of 10 071 patients with ischemic stroke were documented in 2017. Of these, 624 were excluded because of a missing or erroneous postal code or residence outside Rhineland–Palatinate and a further 419 owing to double registration (eight criteria identical). The population for analysis thus comprised 9028 patients (recurrent strokes: 25.2%).

The study was approved by the ethics committee of the Rhineland–Palatinate Medical Association (application number: 2019–14656, retrospective).

The GIMD 2010 is based on data from 2010 (exception: data on the Bundestag election 2009) and comprises seven domains: income, unemployment, education, district revenue, social capital, environment, and security (11-14). The GIMD 2010 scores relate to the districts in which the patients’ residence is located.

The 36 districts were divided into four quartiles according to GIMD 2010, with the lowest GIMD 2010 scores in the first quartile (least deprivation; reference).

A Poisson regression analysis was carried out to establish the association between the incidence of stroke and the GIMD 2010 quartiles, with the incidence rate modeled at district level depending on the GIMD 2010 adjusted for age (10-year age classes) and sex, calendar year, and a binary variable “independent cities/districts”. For analysis of the OPS data, available only in aggregated form, differences between GIMD 2010 quartiles were calculated with 95% CI.

Logistic regression, adjusted for age, sex, and the parameters for which univariate analysis revealed associations (stroke severity [NIHSS] and diabetes mellitus), was performed to analyze the quality assurance data, which were available in the form of individual data sets. The analyses of the DRG statistics were conducted using the statistical package SAS, version 9.4, and the quality assurance data were evaluated with the statistics software R (version 3.1.1.).

Our analyses show a statistically significant association between regional deprivation and hospital treatment of ischemic stroke in the German state of Rhineland–Palatinate.

The increasing overall number of ischemic strokes corresponds with the general epidemiological trend against the backdrop of higher life expectancy. However, the age-standardized incidence of first strokes is decreasing in the western industrialized countries (20). Consideration of our finding of a slight rise in the age-standardized stroke rate must be tempered by the fact that our analysis included both first and recurrent strokes. We used DRG data because these, in contrast to the figures from the State Statistical Office, avoid double registration of transferred patients. The gold standard for the calculation of stroke incidence is a population-based stroke register like the one maintained for Rhineland–Palatinate in Ludwigshafen (21). The incidences derived from billing data are higher than those from population-based stroke registers. One reason for this is the misplaced incentive, in the DRG system, to assign the diagnostic code for stroke even in the case of doubt. However, this effect is presumably constant across regions and thus can be assumed to have no influence on the association we observed. The hospitalization rate for acute stroke is around 95%, so hospital data embrace nearly all patients.

One essential factor in the association between regional deprivation and stroke incidence is that vascular risk factors such as diabetes mellitus, obesity, and high blood pressure are found more frequently in deprived areas (22, 23). As found in other studies (7, 8, 18, 19), diabetes mellitus was over-represented in the more greatly deprived regions of our study

The severity of the neurological and functional deficits increased slightly, yet significantly, with the degree of regional deprivation. Some (24, 25) but not all of the studies on this topic (8) report similar associations. The documentation of the NIHSS by large numbers of physicians has to be treated with caution; however, agreement with the results of the Barthel index, which is assessed by nursing staff, supports the present findings.

The studies to date have shown varying results with regard to the impact of socioeconomic factors on the quality of care in acute stroke (3, 7, 8, 26, 27, 28). Even in prosperous countries (7, 26, 27, 28), associations have been found between regional deprivation and lower standards of care, e.g., a lower lysis rate (7, 27) or a lower rate of prescription of oral anticoagulants in the event of atrial fibrillation (28). In contrast to intravenous thrombolysis, mechanical thrombectomy was carried out more frequently in the least deprived regions; the absolute differences, however, were small. It may be that medical innovations are implemented sooner in socioeconomically advantaged areas. The time from symptom onset to inpatient admission did not increase in line with the deprivation index—a sign that spatial distance from the treatment center is probably not an important parameter. Patients in regions belonging to the fourth GIMD 2010 quartile were given thrombocyte aggregation inhibitors and statins somewhat less frequently than those in the first quartile; the absolute differences were, however, small.

The strengths of our study include the high case numbers and the analysis of both billing data and quality assurance data. The limitations comprise the lack of data on risk factors such as smoking and on the quality of treatment of risk factors; the lower documentation rate of patients in more deprived regions for quality assurance purposes; the inclusion of both first strokes and recurrences; and the relatively large size of the territorial units considered.

We are grateful to Dr. med. Christoph Burmeister, MPH, director of the SQMed Quality Assurance Agency of Rhineland–Palatinate, for his support of the project and to Cornelius Grau for his assistance in data evaluation.

Conflict of interest statement
Dr. Bartig has been contracted by Boehringer Ingelheim to perform analyses of the German Diagnosis-Related Groups system.

The remaining authors state that no conflict of interest exists. 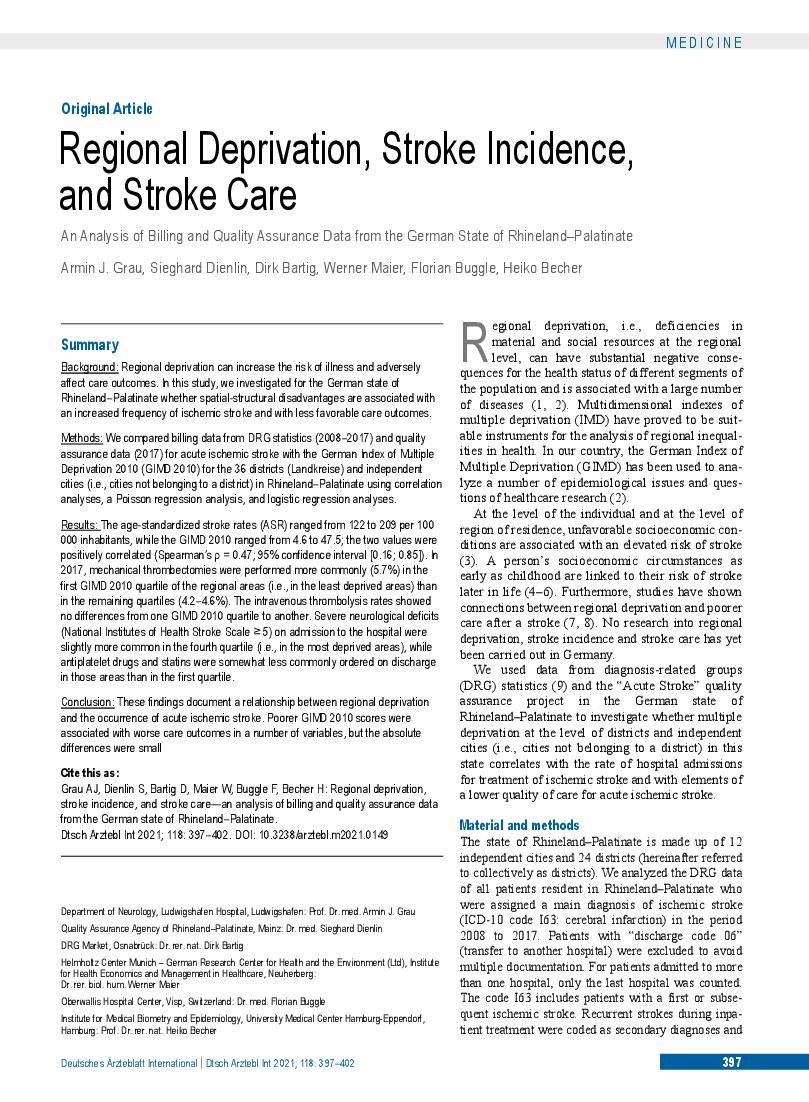