Partnership and Emotional Support in the Doctor-Patient Relationship

Successful communication is a prerequisite for a trusting doctor–patient relationship (1). In the paternalistic model, which corresponds to the traditional view of the doctor–patient relationship—and which has remained unchallenged for centuries—the doctor makes decisions without taking the patient‘s interests into account (2). In contrast, the service model assumes that the patients already knows their goals and only needs information from the doctor in order to make their own decisions. In the 1970s, the concept of the partnership model or shared decision-making was mentioned for the first time in one of the initial works (3). However, the term did not systematically establish itself in the specialist literature until the mid-to-late 1990s (1).

The present study examines the extent to which patient preferences in the doctor-patient relationship have changed from 1996/1997 to 2018. This period includes a drastic change in the use of information technology in our society. Has a paradigm shift occurred with respect to patient preference for symmetrically shared decision-making (for example, “When I visit a doctor, I want him/her to discuss all medical measures with me.”) and psychological support?

A chronologically older sample from 1996/1997 comprises 350 subjects (Table), with a median age of 50 years. Of the study participants, 199 were female and 142 [40.6%] were male, and 9 [2.8%] did not state their sex. At the time of the survey, the test persons were receiving general medical treatment. This data set was collected as part of the working group of the Center for General Scientific Further Education (ZAWiW, Zentrum für allgemeine wissenschaftliche Weiterbildung) (4).

The current sub-sample (2018) comprises 324 patients (median, 52 years old; 167 women and 157 men [48.5%]); the questionnaires were distributed in medical practices. Patients with severe cognitive impairment and underage patients were excluded from the study in both samples.

The complete questionnaire (including quality criteria) can be requested from Prof. Vladimir Hrabal.

The following calculation was carried out using SPSS 25 (IBM, USA). A non-parametric distribution of the sample was determined. A U test was calculated for the comparison between 1996/1997 and 2018, and the effect size “r” was determined (r = z ÷ √n) , as recommended for non-parametric tests.

In addition, the influence of socio-demographic data (including practice affiliation, age, sex, education, and marital status) on the configuration of the year-on-year comparison was examined. The p-values (Table) were unaffected after a Bonferroni correction (p × 4) was applied.

The Table shows the results of the comparison of the items and categories of the two samples. There was a significant increase in the scores obtained in 2018 as compared to that for 1996/1997 for the categories “desire for a symmetrical doctor–patient relationship” (r = 0.372; medium effect size) and “psychological support” (r = 0.477; medium effect size). In contrast, there was a significant decrease in the category scores for the categories “uncertainty about doctors and fear of treatment” (r = 0.749; large effect size) and “desire for a formal doctor–patient relationship” (r = 0.653; large effect size).

The socio-demographic data definitely had no influence on the direction of the effects with respect to the year comparisons of 1996/1997 vs. 2018.

In our opinion, the simultaneous patient preferences for symmetry of the relationship along with psychological support increases the demands on doctors. This may increase the risk of being overwhelmed, which should be investigated in further studies.

Conflict of Interest Statement
The authors declare that no conflict of interest exists.

Translated from the original German by Veronica A. Raker

Table
Differences (U test) of the items between the comparison of 1996–1997 vs 2018; scale scores (0 [does not apply] – 4 [very much applies])
Enlarge All figures
Partnership and Emotional Support in the Doctor-Patient... 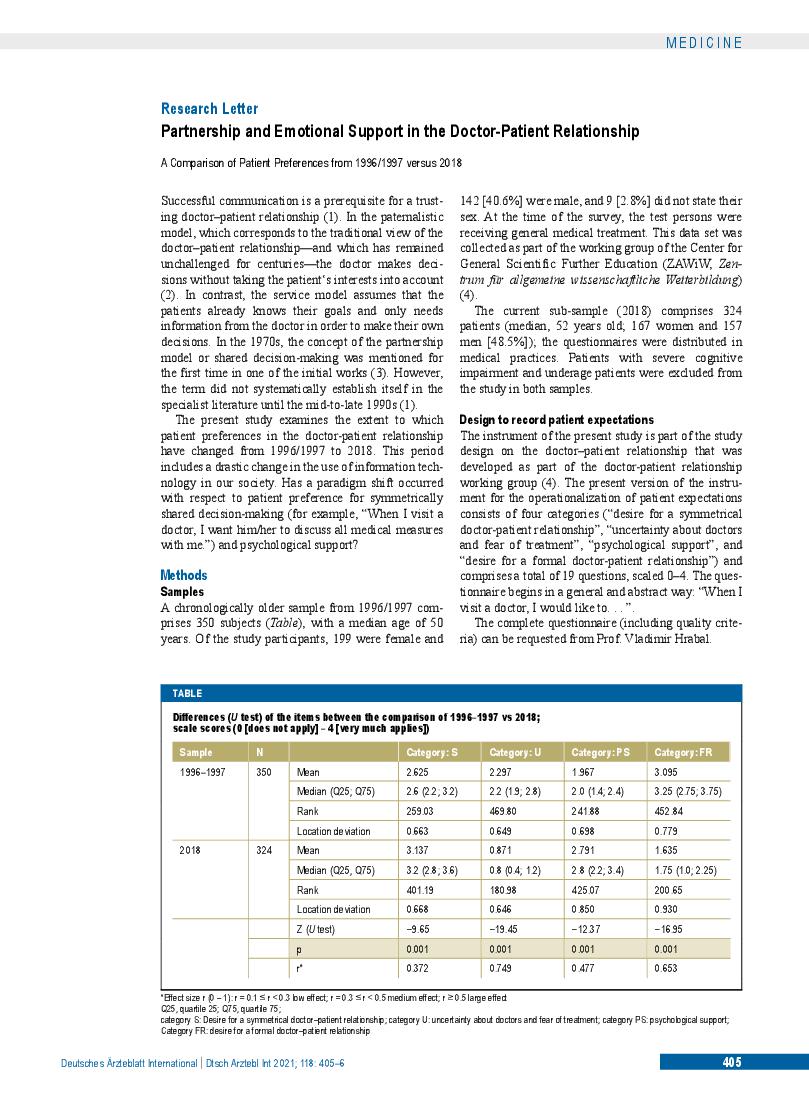