Early Immune Suppression in Children and Adolescents With Crohn’s Disease

To date, failure of the first-line medical management of Crohn’s disease (CD) in children and adolescents has been followed by escalation treatment, with administration of immunomodulators, e.g., azathioprine, or biologics, such as infliximab (1). The most recent revision of the international guideline proposes stratification of the therapy, with selection of either accelerated step-up or primary treatment with biologics on the basis of predictors of poor outcome (POPO) (2). The objective of this study was to evaluate this concept of early immunosuppression with the aid of data from the largest registry of children and adolescents with chronic inflammatory bowel disease (IBD) in Europe.

CEDATA GPGE is a multicenter registry in German-speaking countries that has accumulated data on more than 5000 children and adolescents with chronic inflammatory bowel disease and over 50 000 documented contacts. This study included all patients with CD who fulfilled the following criteria: age 1–18 years, diagnosis at a participating center in the period 2004–2018, addition to the registry within 3 months of diagnosis (to avoid recall bias), and at least two follow-up visits. Patients with at least one predictor of poor outcome were classified as POPO positive, while those without were classed as POPO negative. The following are considered as POPO: perianal disease; a stricturing/penetrating disease pattern; severe growth retardation; extensive panenteric disease; and persistent disease activity despite adequate induction therapy. On the one hand, we ascertained the frequency of occurrence of negative outcome parameters (especially extraintestinal manifestations [EIM]), and on the other hand, we compared patients in whom administration of azathioprine or infliximab was started early with those for whom that was not the case. Kaplan–Meier analysis and Cox regression were performed, excluding medications after occurrence of the endpoint prior to analysis.

Of 2980 patients in the register, 1084 met the criteria specified above and were included. The median follow-up was 10 visits (interquartile range [IQR] 5–15 visits, maximum 94 visits over a period of 769 days (median; IQR 275–1595 days, maximum 3570 days. Seven hundred nine patients (65.4%) had at least one POPO (children under 6: 70%). Although there were no differences between POPO-positive and POPO-negative patients with regard to age, sex, or diagnostic latency, they did differ in disease activity at the time of diagnosis (Paediatric Crohn’s Disease Activity Index 23.3 versus 19.3; p = 0.05).

The predictor “persistent disease activity despite adequate induction therapy” was associated with an elevated risk of failing to achieve a steroid-free remission lasting more than 1 year (OR 1.49 [1.07; 2.07], p = 0.02).

The data presented here indicate that the risk is reduced by early administration of infliximab. They lend emphasis to recent calls for early escalation or initial treatment with biologics in selected cases (3), with the aim of achieving adequate control of persistent disease. Our findings are confirmed by a cohort study of 825 patients in which early initiation of infliximab treatment was associated with a low rate of surgery (4). It has to be taken into account that other factors have also contributed to the decrease in operative interventions over the past 15–20 years. The reduction in the risk of extraintestinal manifestations after administration of infliximab, but not of azathioprine, indicates that early treatment with anti-tumor necrosis factor (anti-TNF) alpha-antibodies is more effective than early use of immunomodulators, as was described in a smaller group (5).

Our observation study with analysis of data from a large cohort supports the treatment concept of the international guideline. The findings may contribute to science-based, patient-centered, and needs-oriented treatment of children and adolescents with IBD.

The increased and early use of azathioprine or infliximab over the past 15–20 years is associated with a decrease in the need for surgical procedures in children and adolescents with Crohn’s disease. Early disease control is particularly important in patients with risk factors to minimize long-term complications and achieve remission.

Prof. Hauer has received consultancy honoraria from Abbvie, MSD, Nutricia, Shire, Milupa, and Hipp and has been the beneficiary of study support (third-party funds) from Janssen.

Figure 2
Risk of extraintestinal manifestations (EIM) after administration of infliximab and azathioprine
Enlarge All figures
Early Immune Suppression in Children and Adolescents With... 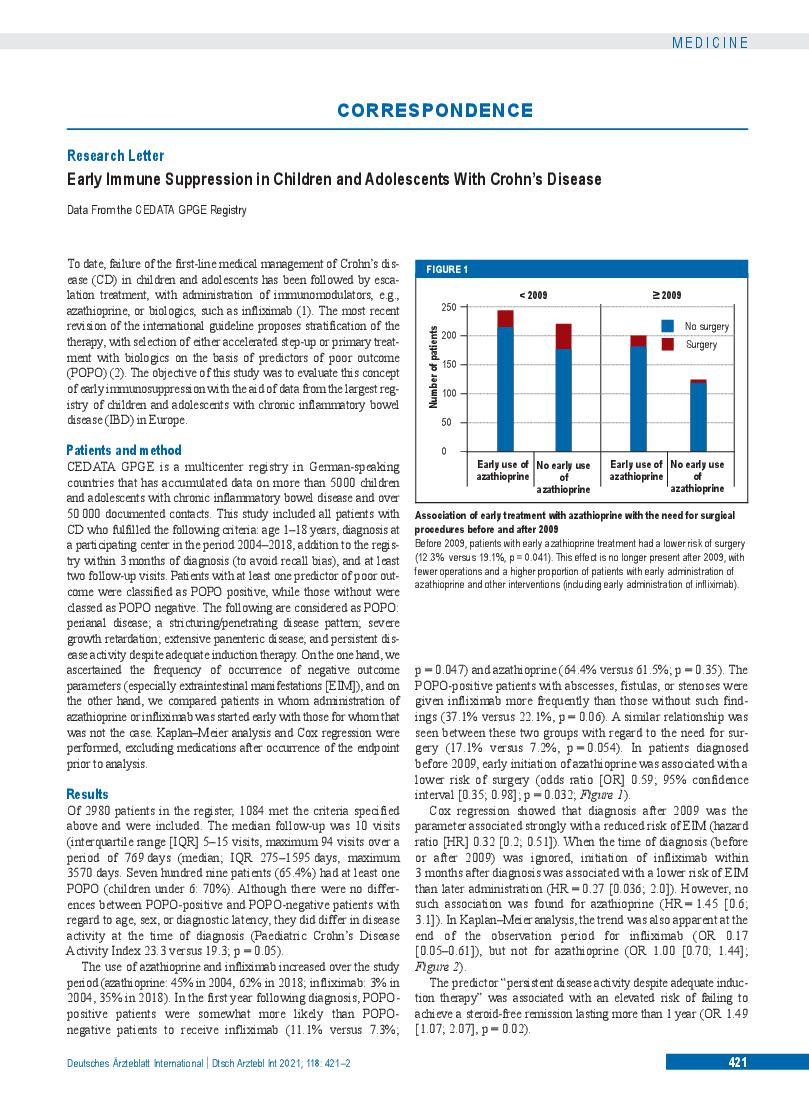