In 2020 the coronavirus pandemic had a sustained effect on everyone’s lives. Protecting vulnerable patient groups against Covid-19 presents a challenge in routine clinical practice. Pregnant women are a particularly vulnerable group (1). Between the 24th and 28th weeks of gestation they are tested for gestational diabetes (GDM) and if required they receive a diagnostic oral glucose tolerance test (OGTT) with 75 g glucose (2). To streamline this approach during the pandemic, Meek et al deployed an alternative testing strategy to the oral glucose tolerance test (3). In three British cohorts they investigated whether measuring fasting glucose levels or determining HbA1c at the end of the second/beginning of the third trimester is suitable for identifying women at risk of an unfavorable pregnancy outcome. The authors suggest for the 28th week an HbA1c cut-off of 39 mmol/moL (5.72%) to detect GDM. We investigated the generalizability of this approach to the healthcare services for pregnant women in Germany.

We tested the suggested strategy in participants of the ongoing German Gestational Diabetes Study (PREG-Study, ClinicalTrials.gov Identifier NCT04270578). In this study, pregnant women between the 24th+0 and 31st+6 weeks of gestation received a 2 h OGTT with 75 g glucose. Venous plasma glucose concentrations were measured at fasting, as well as 1 and 2 hours after glucose ingestion, in a quality controlled manner. Hba1c was measured by HPLC. GDM was diagnosed following IADPSG consensus recommendations (4), which were included in the German guideline GDM (2). If at least one of the three blood glucose measurements was above the cut-off value, a diagnosis of GDM was made (Table 1). In addition to anthropometric data during the pregnancy, data on the pregnancy outcome were collected. In case of a diagnosis of GDM, the women were treated according to the guideline until delivery (2). The PREG Study was approved by Tübingen University’s ethics committee.

A total of 118 cases of GDM were diagnosed among 440 pregnancies. When the HbA1c cut-off of 39 mmol/moL (5.72%) suggested by Meek et al was applied, GDM was discovered in 12 women (Table 2). In 106 women, GDM was not diagnosed according to this criterion. Eight women with a normal glucose metabolism had an HbA1c measurement above this cut-off. The specificity of the suggested HbA1c cut-off value is 97.5%, but its sensitivity is only 51.2%. Using a lower cut-off of 32 mmol/moL could increase the sensitivity to 78%, but the specificity would then be only 51.2%. When applying the slightly different criteria from Britain’s National Institute for Health and Care Excellence (NICE), 104 women had a diagnosis of GDM (rather than 118). Of these, only eight had an HbA1c measurement above 39 mmol/moL. Compared with women with GDM and low HbA1c, those with HbA1c >39 mmol/moL had a fasting glucose concentration that was 0.5 mmol/L (± 0.04) higher, whereas the values after glucose intake were comparable. The two groups also differed in terms of the anthropometric parameters of the mothers (Table 2).

Table 2
Characteristics of pregnant women and neonates
Enlarge All figures

Among the pregnant women with low HbA1c, those with GDM did not only have higher blood glucose concentrations before and during the OGTT, but they were also older and heavier. Although the HbA1c of these women with GDM was still below the cut-off suggested by Meek et al, HbA1c was higher than in women with a normal glucose metabolism (Table 2).

Furthermore, appropriate treatment after the diagnosis of GDM resulted in normal birth weight.

Our analysis shows that in the second and third trimester, an HbA1c value above 38 mmol/moL (5.72%) is not suitable for making a diagnosis of GDM. Most patients with GDM (89.8%) would have been overlooked if this approach had been used and would not have been treated. Even when a lower HbA1c cut-off (32 mmol/moL) had been applied, about one fifth of GDM cases would have remained undetected.

Using an HbA1c cut-off identifies primarily women with a high fasting glucose concentration, whereas women with high postprandial glucose levels but normal fasting glucose are often missed. But it is precisely these high glucose peaks that cause excess insulin secretion in the fetus, which promotes fetal overgrowth. The current recommendations for screening for GDM are based mainly on the Hyperglycemia and Adverse Pregnancy Outcome (HAPO) Study (5). By examining more than 23 000 participants this study showed that even moderately raised blood glucose levels were associated with a clearly increased risk for macrosomy, neonatal hypoglycemia, and cesarean section. Consistent treatment of women with only moderately raised HbA1c can likely reduce rates of this complications.

Even if an alternative, low-contact testing strategy is desirable during the pandemic, this should not happen at the expense of the mothers’s and child’s long-term health. Measuring HbA1c alone in the second and third trimester cannot be a substitute for oral glucose tolerance testing to diagnose GDM. A diagnostic OGTT remains the most reliable approach for identifying affected patients and timely initiate optimal treatment.

Acknowledgments
We thank all participants of the PREG Study and the entire study team. 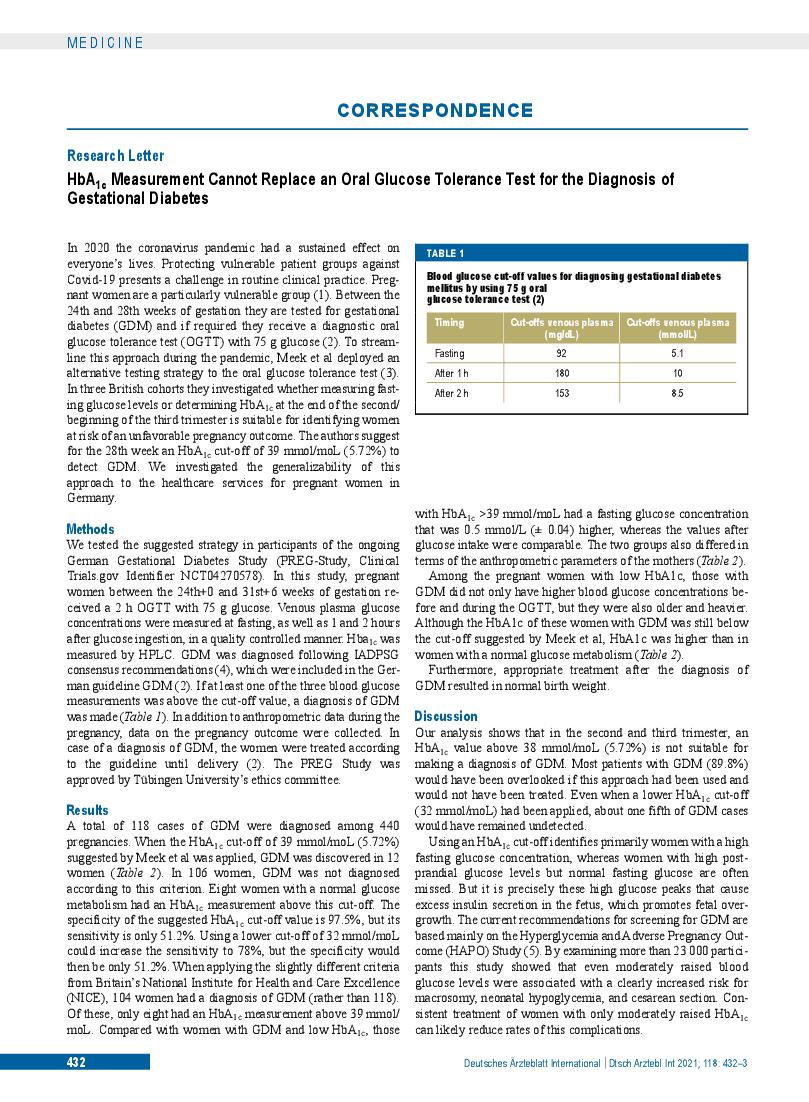