Hospital Mortality and Current Trends in Liver Transplantation in Germany

Background: Liver transplantation (LT) has undergone dynamic developments in recent decades. In Germany, the Federal Joint Committee (G-BA) recently tightened the guidelines regarding the minimum number of transplantations a center should perform annually. The aim of the study presented here, was to analyze recent trends in hospital mortality due to LT in Germany.

Conclusion: Our study showed that differences in mortality rate after LT among centers (LVC vs. MVC/HVC) were dependent on patient age and disease etiology. This should be taken into account when discussing the overall organization of LT in Germany.

Liver transplantation (LT) has evolved as a standard therapeutic approach for patients with end-stage liver disease, acute liver failure and early-stage liver cancer (1). While 5-year survival rates have constantly increased to over 80% (2, 3), organ shortage still represents the biggest obstacle to this curative treatment (4). In 2019, 868 patients were actively awaiting LT on the Eurotransplant waiting list and 317 patients were removed from the list because of death or being unfit for LT (5). Given the existing shortage of donor organs, hospital mortality following LT, which is specified between 10 and 17% (6, 7), is a critical factor that should be closely monitored to further optimize outcome of LT. In addition, the German LT field faced a major scandal in 2012 when irregularities over liver organ allocation at individual German LT centers became public. Following intense discussion about reducing the number of transplant centers in order to further improve the quality of LT in Germany (8), the German Federal Joint Committee (G-BA) has recently tightened the minimum quantity regulation for the performance of LT (20 LT/year) (9).

Standardized data sets represent a unique opportunity to understand current developments and identify areas with a potential for improvement. In this study, we used hospital discharge data to evaluate hospital mortality rates and other trends of LT in Germany between 2008 and 2017.

Patients who received LT were identified using the OPS codes 5–504.0 and 5–504.1 (OPS, Classification of Operations and Procedures, i.e. the German modification of the International Classification of Procedures in Medicine). Due to complete anonymization of data no additional ethics approval was necessary. All analyses were performed via remote data access at the German Federal Statistical Office (Wiesbaden, Germany) using SPSS (IBM Corporation, Armonk, USA). Statistical tests and corresponding p-values are presented for descriptive purposes, only. The analyses are essentially hypothesis-generating and the results need to be confirmed on further data. Detailed information on eligibility criteria and statistics are given in the Supplementary material.

Liver transplantation in Germany between 2008 and 2017

A total of 9254 liver transplantation (LT) procedures performed in Germany between 2008 and 2017 were included in this study (Table, eTable). While the annual number of LT in Germany increased until 2010, it has since shown a decreasing trend with a fall of 19.8% from 2011 to 2013 (Figure 1), which correlated well with the occurrence of the liver transplant scandal in 2012 (10).

Table
Characteristics of the study population
Enlarge All figures

eFigure
Trends in liver transplantation in Germany
Enlarge All figures

We subsequently evaluated the influence of relaparotomy as a surrogate for postoperative complications and the influence of duration of mechanical ventilation on hospital mortality. The results were as follows: 2764 (29.9%) patients underwent relaparotomy. Relaparotomy rates were lowest in 2008 (26.3%) and highest in 2013 (33.1%, p = 0.061, eFigure b). Patients who required relaparotomy had a higher hospital mortality rate (26.3%) compared to those with an uncomplicated postoperative course (hospital mortality rate, 9.2%) (OR: 3.536, 95% CI: 3.138–3.985, p<0.001). 6482 patients required mechanical ventilation (MV) during their hospital stay (not including surgery itself). The median duration of MV was 76 h and was comparable between 2008 and 2017 (p = 0.380).

We stratified the German transplant centers into three groups according to the number of LT performed annually:

Finally, we investigated a potential association between LT volume and the patients’ clinical course and found differences in terms of duration of hospitalization and mechanical ventilation (MV). As such, the median duration of hospitalization was numerically highest at LVCs (38 days, interquartile range [IQR]: 22–66) compared to MVCs/HVCs (34 days, IQR: 21–60) (p = 0.009). Moreover, patients transplanted at a LVC had a longer median duration of MV (98 hours, IQR: 30–410 hours) compared to patients transplanted at a MVC/HVC (75 hours, IQR: 25–283.5) (p = 0.002).

We identified an overall hospital mortality rate of 14.3% for all LT performed in Germany between 2008 and 2017, which is comparable to analyses e.g. from South Korea (6, 11). Our data show a decrease in hospital mortality over time, most likely caused by a variety of factors including a better matching of organ donors and recipients, decreased cold ischemia time combined with improved surgical techniques, and developments in immunosuppression, anesthesia and intensive care medicine (12, 13). However, the total number of LT has likewise steadily decreased from 2010 on e.g., due to a decline in postmortem organ donation associated with detection and reporting deficits (4). This trend was possibly aggravated by the liver transplant scandal that became public in 2012 (10).

Our study also provides evidence that various aspects of the individual clinical course such as the duration of MV or the necessity of relaparotomy are associated with increased hospital mortality. Similarly, data from the US suggest that a longer duration of MV is a risk factor for long-term mortality (14). Interestingly, it has recently been shown that early tracheostomy (≤3 days post-surgery) can result in shorter duration of MV following LT (16), representing a starting point to reduce the duration of MV to improve outcome.

The systematic analysis of mortality data is a fundamental aspect of patient safety. The time after the introduction of the MELD (Model for End-stage Liver Disease) system has shown that mortality increases with the severity and complexity of the disease (16). Therefore, it is imperative that the decision to list and transplant is made by an interdisciplinary team, as it has been established practice at all German transplant centers at the latest after the liver transplant scandal through several mechanisms of self- and third-party control (17). In this sense, the decision to transplant critically ill patients naturally involves the risk of increasing mortality at one’s own center and it cannot be excluded that there has been a bias due to selection of patients more likely to undergo a successful LT while other individuals may have been disadvantaged. In contrast, there is an increasing debate about minimum numbers and quality parameters in the German health care system with its large number of service providers, financial incentives for complex interventions, and a lack of central control of patient flows. In line, the G-BA has recently significantly reinforced the minimum quantity regulation for the performance of liver transplants (9).

Our study found a higher hospital mortality at low volume transplantation centers (<20 LT/year) compared to centers that perform ≥20 LT annually. In addition, we observed a longer duration of hospital stay and MV in patients transplanted at LVCs, which is in good agreement with data from Korea (6). Nevertheless, multivariate regression analysis shows that the higher mortality at LVCs is partially influenced by confounding variables such as the patients’ age and disease etiology. In addition, the higher mortality rate in LVCs was not observed when looking at patients under 16 years of age only.

Particularly in the wake of the German transplantation scandal in 2012, patient advocates, health insurance funds and doctors have called for a reduction in the number of German transplantation centers to simplify constant monitoring and to reduce the existing economic incentives associated with LT (8). Interestingly, our data show that the percentage of patients transplanted at LVCs increased from 2008 to 2013 and has remained around 10% since.

LT in older recipients has remained controversial (11, 18, 19). With only 170 LT during the 10-year observation period (1.2%), LT in patients >70 years has been an exception in Germany. Interestingly, our analysis revealed an increase in hospital mortality with recipients’ age but a hospital mortality rate of 16.5% in recipients older than 70 years, which was comparable to patients between 60 and 70 years. Thus, in times of an increasing donor age, LT in very old recipients may still be a reasonable treatment option in selected cases and a higher numerical recipient age should not per se be an exclusion criterion for LT.

Of note, our analysis showed that two out of three livers were transplanted to men, which raises the question if there could be a gender bias in the allocation system. Allocating donated organs based on the MELD system disfavors females, due to the inherently lower creatinine values in women (20). However, there are also findings arguing against this hypothesis, such as lower incidences and severity of liver disease and lower alcoholism or HCC incidence rates in women. Importantly, a recent study found that women had no difference in risk of liver related death despite lower rates of listing and transplantation (21).

Patients transplanted for HCC had the lowest hospital mortality rate, corresponding to the fact that HCC patients usually have a clinically lower stage of liver cirrhosis. Of course, this difference relates exclusively to hospital mortality. In contrast, the risk of tumor recurrence, which often presents as systemic tumor spreading to multiple organs including lungs, liver, bones and lymph nodes, relativizes the overall outcome of HCC patients (12, 22).

Of note, the present German ICD coding system in combination with the remote access of data precluded identification of all etiology subgroups of patients such as those with non-alcoholic steatohepatitis (NASH) or hepatitis B and C, representing a disadvantage of nationwide multicenter analysis including ours compared to smaller single center studies. As e.g. the incidence of NASH is rising (23), a clearer attribution of NASH cirrhosis and other liver conditions to individual ICD codes could lead to a more adequate representation of this important entity in the health care system and the political discourse.

We acknowledge that our study has some important limitations. Our analysis only gave information on hospital mortality but mortality data for later time points such as transplant and overall survival were not available. Complete anonymization of data also prevented the identification/exclusion of specific subgroups such as patients who received more than one LT.

Furthermore, the pure analysis of mortality is limited in its informative value, as it does not allow a more in-depth analysis of the causes. Therefore, any conclusions must be drawn carefully and it must always be borne in mind that mortality has many causes. Such a discussion must not lead to a situation in which the doctor is discouraged to transplant even very seriously ill patients in order not to jeopardize the center’s LT success rate e.g., in terms of patient mortality rate.

Finally, due to the time latency with which the data is made available by the Federal Statistical Office, it was not possible to perform an analysis up to the present date.

Taken together, our data show that despite being a highly complex procedure that necessitates well organized interdisciplinary cooperation, hospital mortality rates of LT in Germany have decreased between 2008 and 2017. Despite these positive findings, efforts to improve the organization, coordination, and quality of organ donation should persist, to ensure that even more patients will benefit from LT in the future.

Financial support
Work in the group of Tom Luedde was funded by the European Research Council (ERC) under the European Union’s Horizon 2020 research and innovation program through the ERC Consolidator Grant PhaseControl (Grant Agreement n° 771083). The group of Tom Luedde was further supported by the German Cancer Aid (Deutsche Krebshilfe 110043 and a Mildred Scheel Professorship) and the German Research Foundation (SFB-TRR57/P06, LU 1360/3–1, CRC1380/A01, and CA 830/3–1).

Prof. Knoefel received payment for medicolegal evaluations relating to the topic of this article. Study support (third party funding) was made available to him by the Else-Kröner-Fresenius Foundation.

Prof. Neumann received reimbursement of conference fees and travel expenses as well as lecture fees from Astellas, Roche, Merck and Novartis. Study support was made available to him by Astellas, Merck, Roche, Novatis, and Organ Assist.

Table
Characteristics of the study population
Enlarge All figures

eFigure
Trends in liver transplantation in Germany
Enlarge All figures

eTable
Detailed description of study population from 2008 to 2017
Enlarge All figures
eMethods (pdf)
Hospital Mortality and Current Trends in Liver... 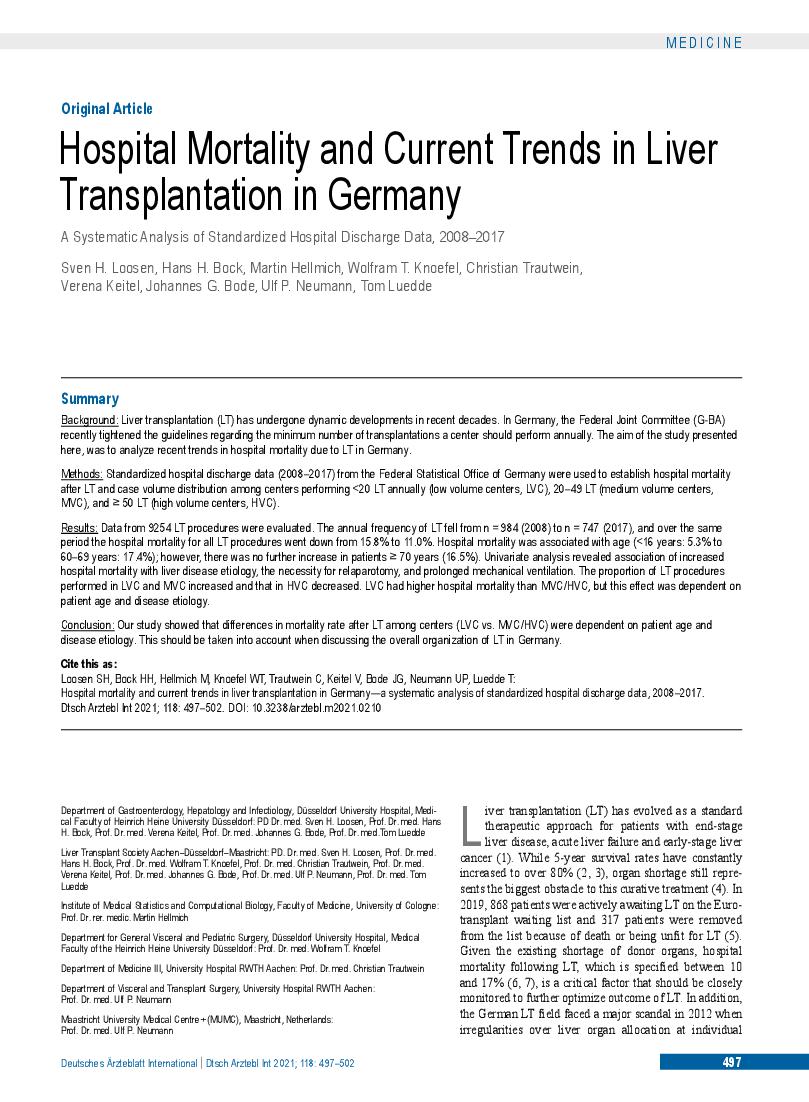