Findings of a Point-Prevalence Study in 78 Hospitals

Peripheral and central venous catheters (PVC and CVC, respectively) are often used for hospitalized patients. They pose a risk of infection both as a foreign body and due to potential damage to the skin barrier. However, there is still little data on the frequency of use and infections in Germany. The aim of this study was to use a point-prevalence analysis (PPA) to determine the prevalence of associated infections and possible risk factors due to the use of CVCs and PVCs.

A PPA was carried out at 78 intensive care hospitals of the Helios Group in May 2019. Basic to maximum care providers were represented in a ratio that is comparable to the overall distribution of hospitals in Germany. Hygiene specialists visited all stations in an unannounced manner and recorded all PVCs and CVCs present, including tunneled catheters and ports. Patients were examined for signs of infection, such as redness, pain, or thrombophlebitis. If transparent dressing had not been used, the dressing was removed for inspection. Patient files were searched to determine if vascular catheter–associated bacteremia had been detected within the previous three days. For indwelling PVCs, the indication was also questioned; PVCs that had not been used in the last 24 h, and for which no intravenous therapy was planned in the next 24 h, were classified as catheters kept in place without indication.

Eight hundred wards were visited (including 78 intensive or intermediate care wards and 10 neonatal intensive care wards). Overall, 39.5% of patients had at least one vascular catheter. For 1 574 of the catheters (21.7% of all placed catheters with corresponding documentation, 95% CI: [20.8; 22.7]), the last inspection had taken place more than 2 days previously. The catheter that had been left unused for the longest period of time was a PVC that had been placed 19 days previously but had not been used for the past 18 days, and it showed clear signs of inflammation. Of the indwelling PVCs, 678 (9.4% [8.8; 10.1]) had no clear indication. Overall, 251 catheter sites (3.1%, [2.7; 3.5]) showed signs of infection. At the time of the PPA, 1.4% [1.3; 1,6] of the catheters in the hospitalized patients were associated with a nosocomial infection. In most cases (97% of infected catheters), only local signs of inflammation were observed (Table 1).

In the multivariate logistic regression analysis, unclean dressings and no recent inspection were identified as independent risk factors for an infection of a PVC (Table 2).

More than 17 000 patients were examined. On average, every third patient had at least one PCV/CVC. Around 3% of all catheters showed signs of infection at the time of the PPA. Most cases (97%) presented local inflammation. Similar high prevalence rates of infection have been described in other studies (1).

Some risk factors for the infection of vascular catheters are known and are now taken into account in standards. Placing CVCs with maximum barrier measures, using skin antisepsis with an antiseptic active ingredient, and positioning the PVCs preferably on the back of the hand or forearm are established in standards. The aim of this study was to identify risk factors that have not previously been the focus of studies. Catheter-specific risk factors for the development of an infection in PVCs were unclean dressings and no recent inspection. The entry site and the dressing should be inspected daily (2) to ensure a safe dressing and to detect infections at an early stage. In addition, inspections serve as reminders to review the indication. In our investigation, almost a quarter of all vascular catheters had not been inspected for at least two days, 16% of all dressings were not acceptable, and 9% of all catheters had no clear indication. In previous prevalence studies, the proportion of unused catheters was reported to range from 7% to 38% (1, 3). In many clinics, PVCs are placed in the emergency room by nurses before examination of the patient or prescription of intravenous medication by the physician. Often these catheters are not used later and are only left in place to extract blood or as a prophylactic because the patient‘s condition could worsen.

Indwelling duration is one of the known risk factors for infection of vascular catheters. Changing the catheter at certain time intervals does not prevent infection (4). Presumably, it is not the indwelling duration per se but rather the total exposure to vascular catheters that poses a risk for infection. Reducing exposure by removing unnecessary catheters as early as possible leads to a reduction in infections. Simple measures as reminders can be very effective (5). One limitation of this non-confirmatory observational study is that, despite the large sample from a wide range of clinics, it cannot be guaranteed that the results are representative.

In sum, we found a high prevalence of vascular catheters among inpatients. Some catheters were infected, but not severely in the majority of cases. Risk factors for an infection were primarily those that indicated a lack of awareness of the problem logistics. By implementing suitable training measures as well as stringent guidelines for indication, documentation, and care, infections could be reduced. 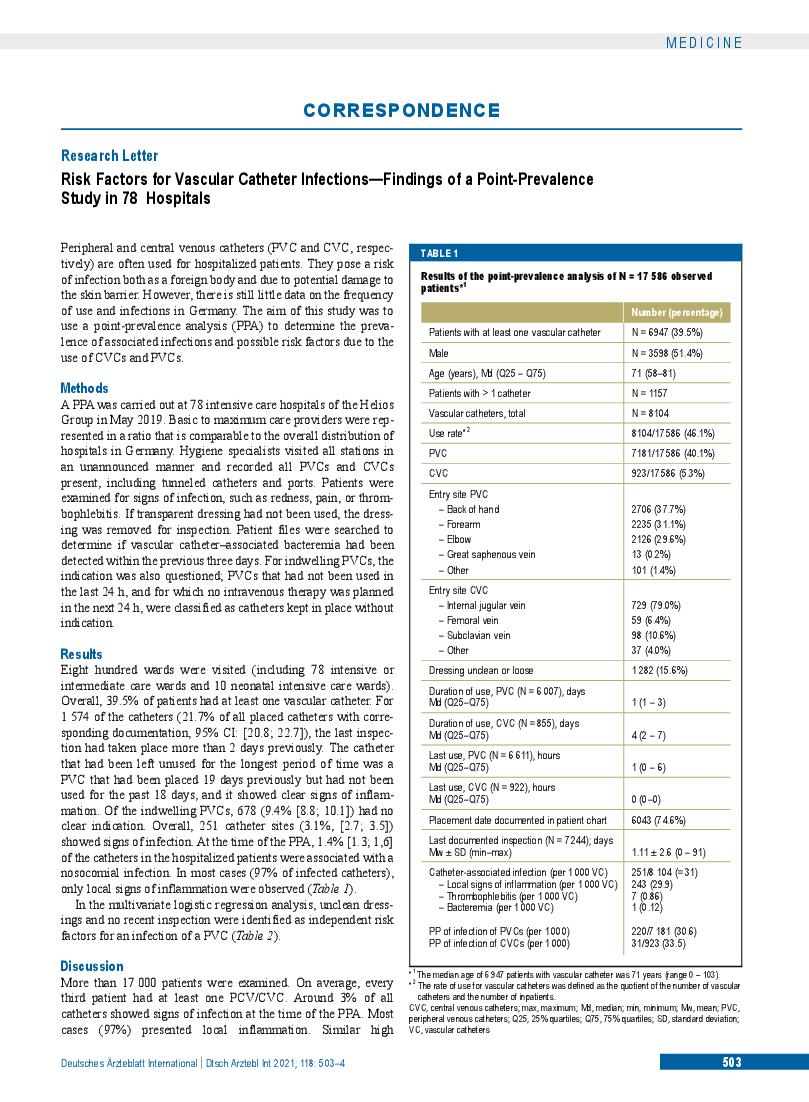